Folorunsho Alakija is Nigeria's self-made billionaire, its richest woman and unofficially one-time first female African billionaire as well as the richest black woman in the world. She is the woman who dethroned the savvy super rich talk-show host Oprah Winfrey as the world richest black woman. The business tycoon draws her fortune from the fashion, oil and printing industries.

Folorunsho Alakija, former beauty queen and oil tycoon is unofficially the richest black woman in the world with an estimated fortune of $7.3 billion

Currently Alakija is the second female billionaire from Africa with a net worth of $2.5 billion (Forbes 2013). She came second after Angola`s Isabel Dos Santos. Africa`s second She is the Group Managing Director of The Rose of Sharon Group which consists of The Rose of Sharon Prints & Promotions Limited, Digital Reality Prints Limited and the Executive Vice Chairman of Famfa Oil Limited. Her Famfa Oil owns 60% of a Nigerian oil deposit called OML 127 which produces 200,000 barrels of oil each day.

Folorunsho Alakija who is Nigeria`s fashion pioneer was ranked by Forbes 2012 list of richest people in Africa as the richest woman in Nigeria with an estimated net worth pegged at $600 million. However after the Forbes report, 62 year old Folorunsho Alakija won a landmark legal victory against the Nigerian government earlier the year, Folorunsho Alakija's net worth skyrocketed to $3.2 billion which makes her $500 million richer than Oprah Winfrey. 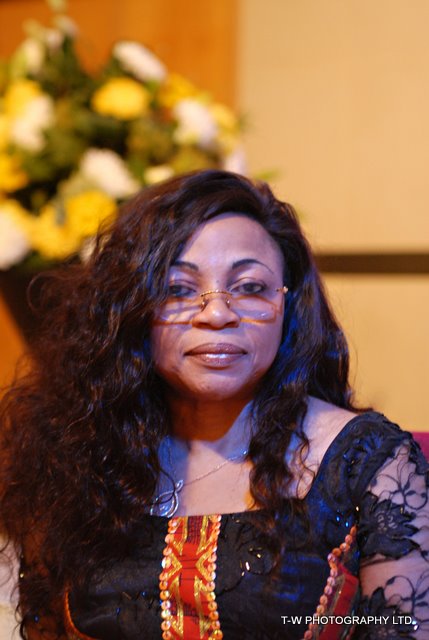 $3.2 billion also means that Alakija she was the fourth richest black person on the planet behind fellow Nigerians Mike Adenuga and Aliko Dangote ($4.7 billion, $20.5 billion) and Ethiopian Mohammed Al Amoudi ($12.5 billion). Folorunsho Alakija is also a mother of four children, grandmother, wife of 40 years, and an active philanthropist.

Folorunsho was was born in 1951, into a wealthy Nigerian family. Her father had eight wives and 52 children. She had her infant education in Wales, and returned to Nigeria to complete her education. She went back to London again to complete her secretarial studies at Pitman’s Central College, from thence she came to work in the mid 1970`s as a secretary at the now defunct International Merchant Bank of Nigeria, one of the West African nation's earliest investment banks. When the bank was liquidated, she traveled to England to study fashion design at the American College, London and the Central School of Fashion. 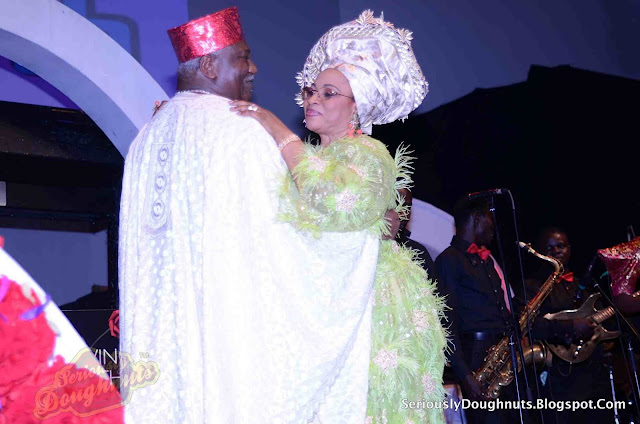 Immediately after her graduation, Folorunsho founded Supreme Stitches, a Nigerian fashion label that catered to upscale clientele. After this she came out with Rose of Sharon House of Fashion, which became a household name in Nigeria and as a result in 1986, Folorunsho Alakija was named Best Designer in Nigeria. Her biggest break, however, came in oil.

Using her popularity as “The best Designer in Nigeria” and her purchasing power she applied for an Oil Processing License in 1993. The Nigerian President Ibrahim Babangida awarded her company, Famfa Oil, an oil prospecting license which went on to become OML 127, one of Nigeria's most prolific oil blocks. In 1996, Alakija hired oil conglomerate Texaco to do feasibility studies on the potential oil in her granted area and after four years of studies it came to light that Alakija was sitting on an estimated one billion barrels of oil!

Today her Famfa Oil currently run by his sons and husband lawyer Modupe Alakija, owned 60% stake in the block until 2000 when the Nigerian government, led by former President Olusegun Obasanjo, unconstitutionally acquired a 50% interest in the block without duly compensating Alakija or her company. Famfa Oil went to court to challenge the acquisition, and in May 2012, the Nigerian Supreme Court reinstated the 50% stake to Famfa Oil. Chevron owns the remaining 40%. 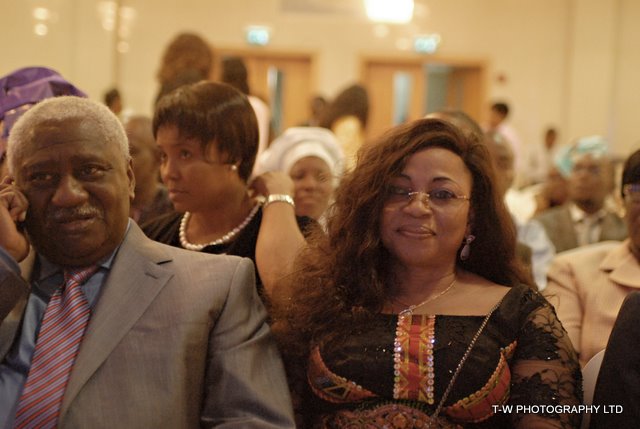 Mrs Folorunsho Alakija celebrated her 60th birthday on July 16th, 2011 and she and her husband, Modupe Alakija marked their 35th wedding anniversary. She wrote and published two books

Folorunsho uses her time spending and giving away her vast fortune. She created the Rose of Sharon Foundation in 2008, with the support of 350 illustrious men and women to ease the burdens of this vulnerable group. Three years after starting, Rose of Sharon had empowered 2,760 widows, providing them with workshops to connect with other widows and share their testimonies. These women also received monetary support, scholarships for their children and interest free loans to start up small businesses.

Move over, Oprah! Nigerian billionaire unseats TV queen as the richest black woman in the world with $7.3b oil fortune

Move over Oprah, Nigerian oil tycoon Folorunsho Alakija is now the richest black woman in the world with an estimated fortune of $7.3 billion.
Africa boasts 55 billionaires - far more than previously thought - and they're worth a staggering $143.88 billion in total, according to pan-African magazine Ventures Africa.
Starting her career as a secretary in a bank in the mid 1970s, Alakija, 62, then studied fashion in London and returned to Nigeria to start a label, Supreme Stitches. But her biggest break came in oil.

In 1993, her company, Famfa Oil, was awarded an oil prospecting license, which later became OML 127, one of the country's most prolific oil blocks, by then-president Ibrahim Babangida.
The company owned a 60 per cent stake in the block until 2000 when the Nigerian government unconstitutionally acquired a 50 per cent interest without duly compensating Alakija or Famda Oil.
In May 2012, Alakija, a married mother-of-four, challenged the acquisition and the Nigerian Supreme Court reinstated the 50 per cent stake to her company.
She also has a charity called the Rose of Sharon foundation that helps widows and orphans by empowering them through scholarships and business grants.

Forbes magazine had estimated Alakija's fortune at $600 million, as of November 2012, but the magazine's editor-in-chief Uzodinma Iweala said his researchers were 'closer to the ground.'

+3
Still rich: According to Forbes, Oprah Winfrey, pictured, is worth $2.9 billion

+3
Richest African: The overall richest African is Nigerian manufacturer Aliko Dangote, pictured, who is worth $20.2 billion. Twenty Nigerians are listed in total
They noted that Brazilian oil company, Petrobas, was looking to sell its 8 per cent stake in OML 127 for $1.5- $2.5 billion, and extrapolated that if they managed to sell it for $1 billion, Alakija's 60 per cent stake would be worth at least $7.3 billion.

Iweala claims this and other estimates included in the report are actually 'on the conservative side' and said the magazine expect to unearth more African billionaires shortly.
The overall richest African is Nigerian manufacturer Aliko Dangote who is worth $20.2 billion. Twenty Nigerians are listed in total.
According to Forbes, Oprah Winfrey is worth $2.9 billion.

Doyin Abiola, (middle) and Nike Oshinowo and Folorunsho Alakija at 100 Years of the Nigeria Woman Comferen 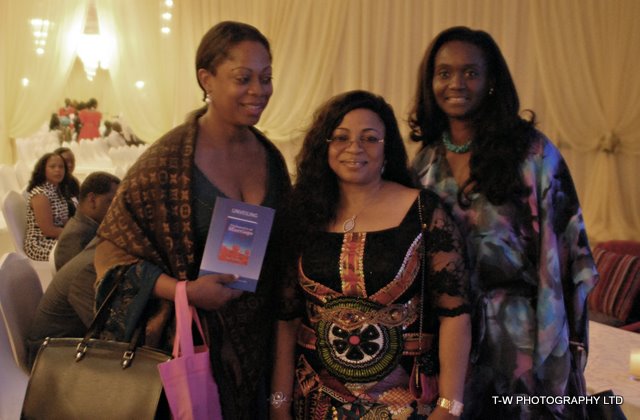 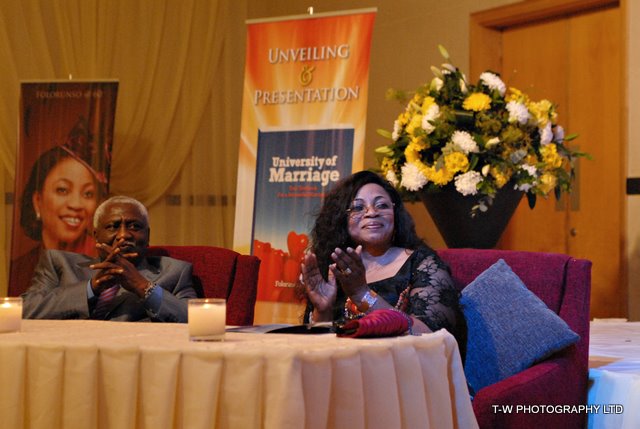 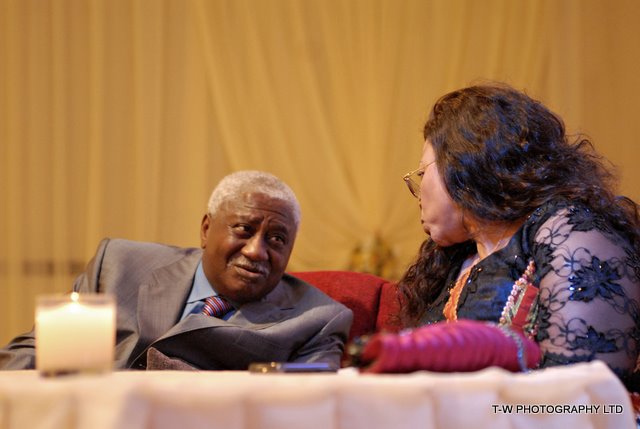 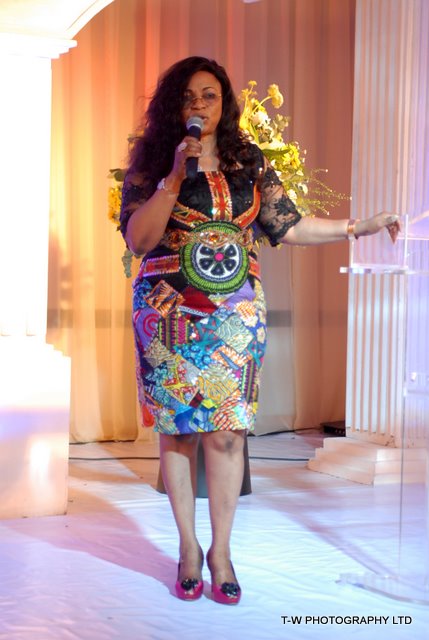 Ladi Alakija and His Wife Lolade 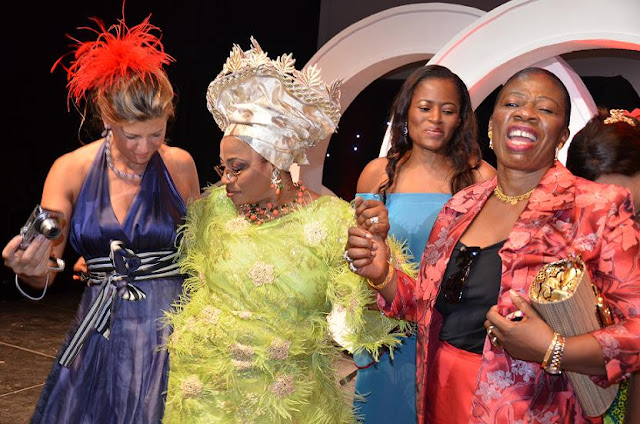 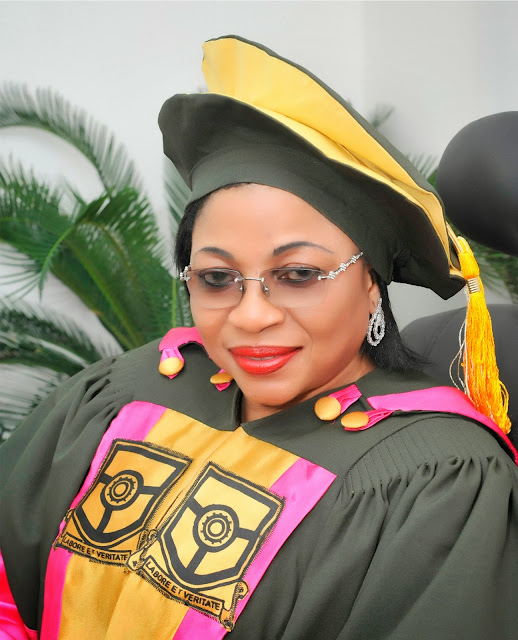 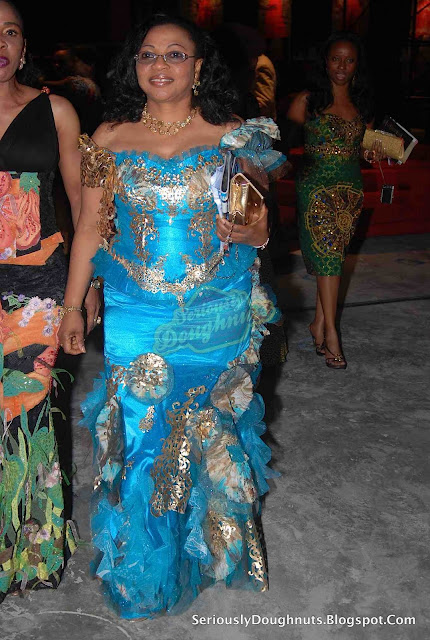 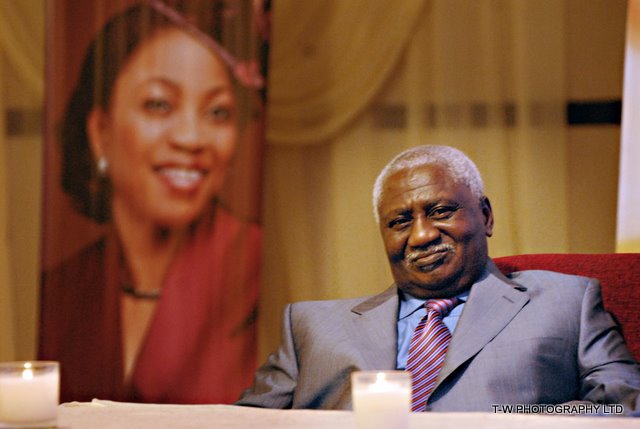 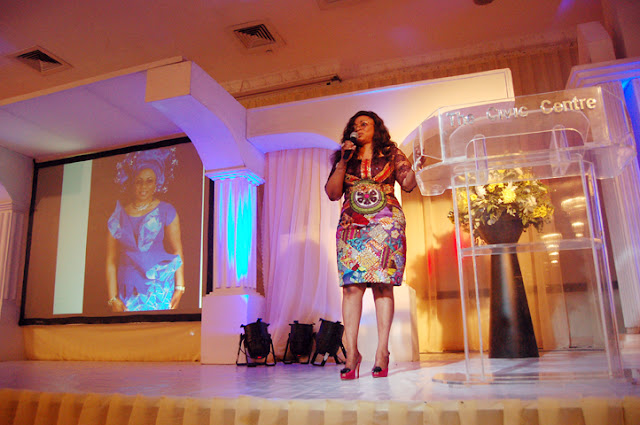 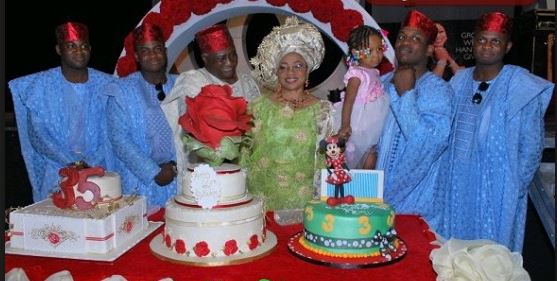 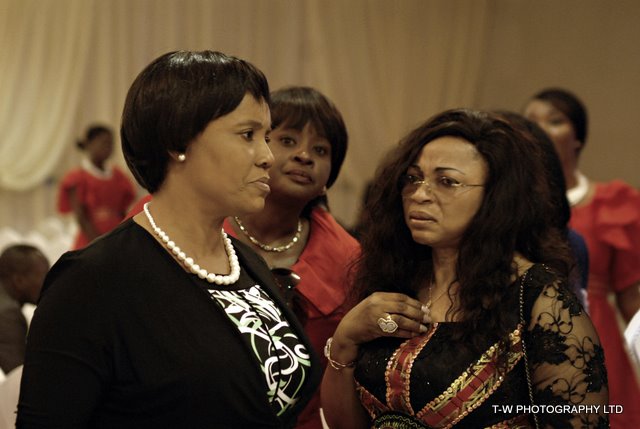 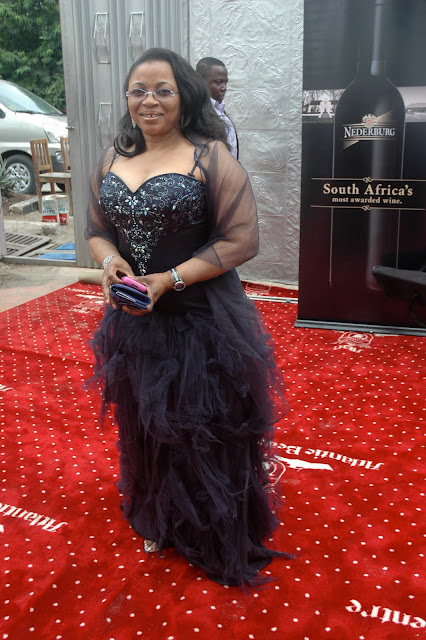 Her father.
Well, unlike many other billionaires who fought various world wars and titanic battles with demons of poverty rising from stark and epidemic squalor before they built their own vast financial empires, Folorunsho Alakija was born with a platinum, sorry, silver spoon, in her mouth. She was born into the prominent and polygamous Muslim family of the Ogbaras, whose generations were known and respected for their sagacity when it comes to monetary affairs and a great degree of financial acumen. In the year 1951, the family of Chief L. A. Ogbara in Ikorodu, Lagos State would be thrown into the spontaneous celebration of a new bouncing baby gurl (abi na girl, me I don forget the spelling jare). They named her Mofolorunsho (meaning ‘I hand over to God for His protection’). She says of her childhood:

Folorunsho Alakija with her mother.

‘It was a happy childhood, I enjoyed growing up. I learnt a lot with my guardian (Mrs.Coker), which was a totally different set-up to my mums. She taught us etiquette, how to sit at a table, went through our homework with us and it was from there actually that I left for England at 7’.

Folorunsho and her step-sister, Doyin.

Her step-sister Doyin, being the daughter of a favoured wife, aged 6 at that time was chosen by her father to travel overseas for her primary school education. He then decided that in order for Doyin not to be homesick, it would be good if someone accompanied her. A young son was initially chosen but the idea was eventually dropped paving the way for Folorunsho, who was seven at that time, to accompany her step-sister. Folorunsho grew up in a large family. Her father had eight wives and 52 children in his lifetime (now left with 46). Her mother was his first wife while she is the second surviving child of her mother and eighth child of her father.
PLEASE CLICK SECTIONS BELOW TO READ
INTRODUCTION
BIRTH AND EARLY DAYS
EDUCATION
FASHION CAREER, MAKING THE MONEY AND HOW SHE BECAME A BILLIONAIRE
LOVE, ROMANCE AND MARRIAGE
CHILDREN
HER INVESTMENTS AND PROPERTY
CONTROVERSIES AND CRITICISM
INTERESTING THINGS ABOUT FOLORUNSHO ALAKIJA
HER WORDS
HONOURS AND AWARDS
CHARITY AND PHILANTRHOPIC ACTIVITIES
REFERENCES
★★★