Queen Amina of Hausaland (ruled 1576-1610 AD) was a Hausa Muslim Warrior Queen of Zazzau (now Zaria) and a brilliant military strategist she fought many wars and won them all. Amina is credited with building the famous Zaria wall.

The preeminent Princess (gimbiya) Amina of the Hausa city state of Zazzau was born around 1533. The Arabic female name Amina means truthful, trustworthy and honest. One source postulates that Amina was a daughter of Queen Bakwa Turunku, who founded the city of Zaria, West Africa, in 1536. It must be noted that the seven original states of Hausaland were Katsina, Daura, Kano, Zazzau, Gobir, Rano, and Garun Gabas cover an area of approximately 500 square miles and comprise the heart of Hausaland. In the sixteenth century, Queen Bakwa Turunku built the capital of Zazzau at Zaria, named after her younger daughter. Eventually, the entire state of Zazzau was renamed Zaria, which is now a province in present-day Nigeria.
However it was her elder daughter, the legendary Amina (or Aminatu), who inherited her mother's warlike nature. Amina was 16 years old when her mother became queen and she was given the traditional title of magajiya ( the heir apparent) in 1549. With the title came responsibility for a ward in the city where she convened daily councils with other officials. She also began training in the cavalry.
Queen Bakwa, died when Amina was 36 years old, leaving her to rule over Zaria. She was also said to have taken a lover from among the conquered people after each battle, and to have killed him in the morning following their night together.

In 1576 she became the undisputed ruler of Zazzau. Distinguished as a soldier and an empire builder, she led campaigns within months of becoming ruler. She built walled forts as area garrisons to consolidate the territory conquered after each campaign. Some of these forts still stand today. She is credited with popularising the earthen city wall fortifications, which became characteristic of all Hausa city-states since then. Towns grew within these protective walls, many of which are still in existence called "ganuwar Amina", or Amina's walls. Amina subdued the whole area between Zazzau and the Niger and Benue rivers, absorbing the Nupe and Kwararafa (kororofa) states ,a  Jukun Kingdom. Under her remarkable leadership, Zaria became the most powerful state in Hausaland. Eventually her holdings stretched down to the sea. The Kano Chronicle, an important Hausa history, speaks of her with great respect: "At this time Zaria under Queen Amina conquered every all the towns.... Every town paid her tribute. The Sarkin Nupe [i.e. king of Nupe] sent her forty eunuchs and ten thousand kolas to her. She was the first to have eunuchs and kolas in the Hausaland. Her conquest extended to over 34 years." The kola nut, which she introduced, is one of the great luxuries of Western Sudan; it is prized for its bitter taste, slightly aphrodisiac properties, and its ability to quench thirst. 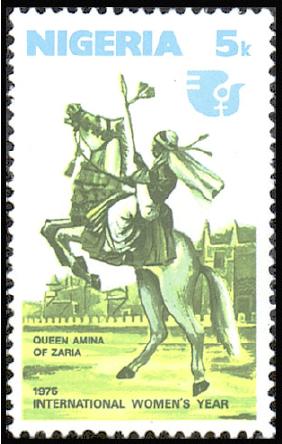 In her time all the products of the west came to Hausaland. The southern expansion provided large supplies of slave labour. Moreover, Zazzau came to control the trade route from Gwanja and began to benefit from the trade previously enjoyed only by Kano and Katsina, two other Hausa city-states. Amina's achievement was the closest that any ruler had come in bringing the region now known as Nigeria under a single authority."
Queen Amina never married though she had men in her life. After Amina`s death, her sister Zaria succeeded to the throne, but Zaria, the kingdom, soon faded from history as a great West African power. Amina is remembered today as “Amina, Yar Bakwa ta san rana,” meaning “Amina, daughter of Nikatau, a woman as capable as a man.”
A statue at the National Arts Theatre in Lagos State honors her, and multiple educational institutions bear her name 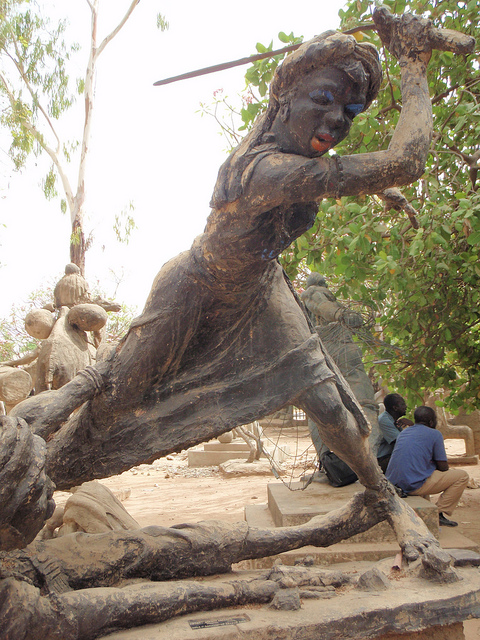 Public sculpture of the warrior Queen Amina in Nigeria