The Hedareb (also known as T`bdawe/To-bdawe) people are amalgamated agro-pastoralist and Arabic-Tigre speaking people composed of Arabic and Cushitic ethnolinguistic groups living in the arid and semi-arid lands located in the northwestern parts of Barka in Eritrea and as far as with the borders with east Sudan. The Hedareb has two major clans: the Beni-Amer people of Arabic or Afro-Asiatic extraction and Beja people who are mostly of indigenous Cushitic extraction. 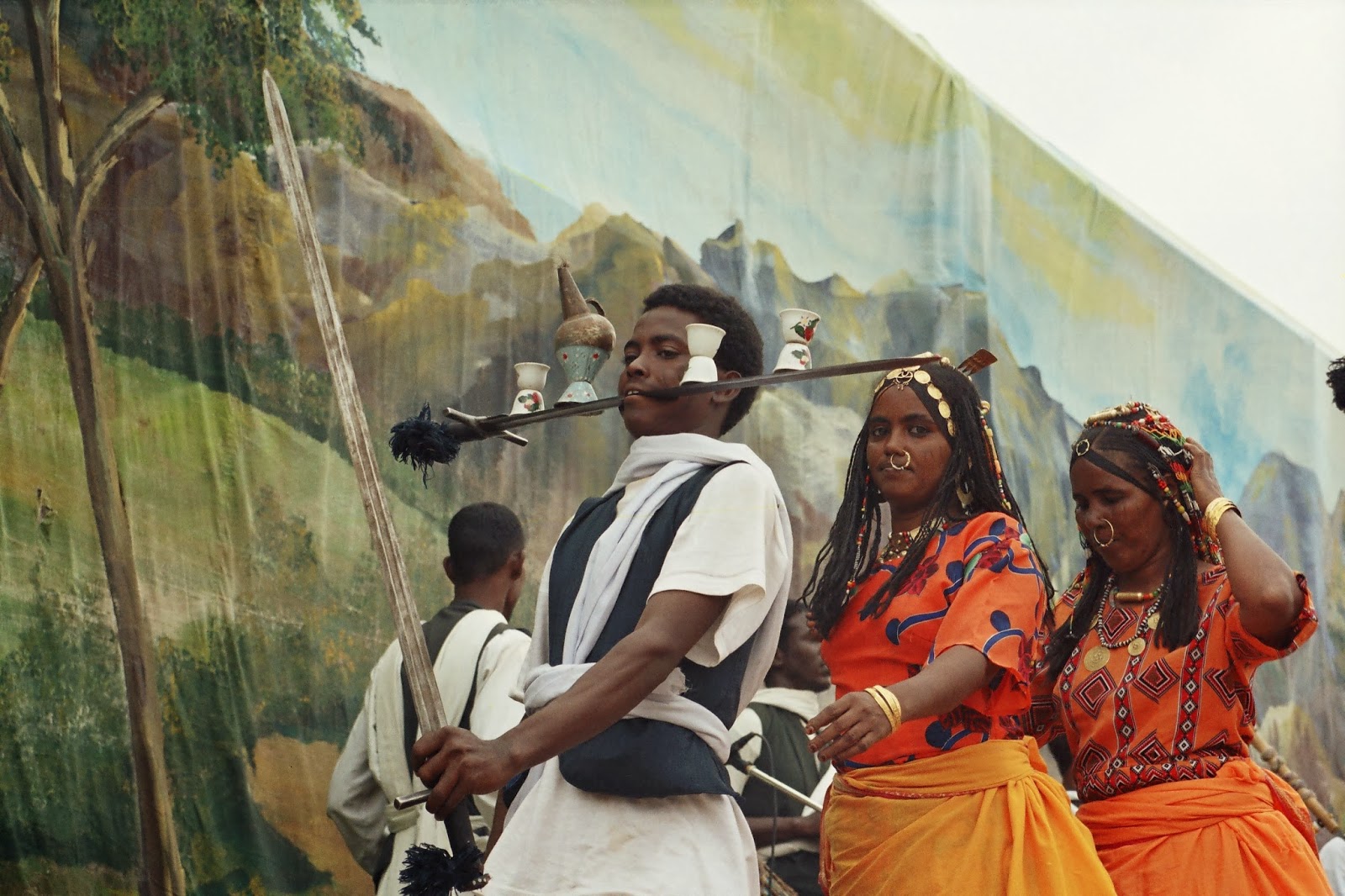 The Hedareb people have sub-tribes such as Hashish, Labat, and Halenqua. Hedareb people (Beni-Amer and Beja) constitute about 3% of the total Eritrean population.
Hederab people speak Tigre and  Beja language. Most Hedareb people are pastoralists who moves from place to place on a seasonal basis. They predominantly keep large herds of camel, goats and sheep. The Beni-Amer who are organized into hierarchical social structure, are known for their pastoral skills, especially in raising camels (Tesfagiorgis G, 2007:142)

The Hedareb territories are arid and semi-arid. These highly organized pastoral communities practice animal husbandry as their main activity in the fragile ecosystem of the northwestern parts of Eritrea and as far as areas bordering Sudan. 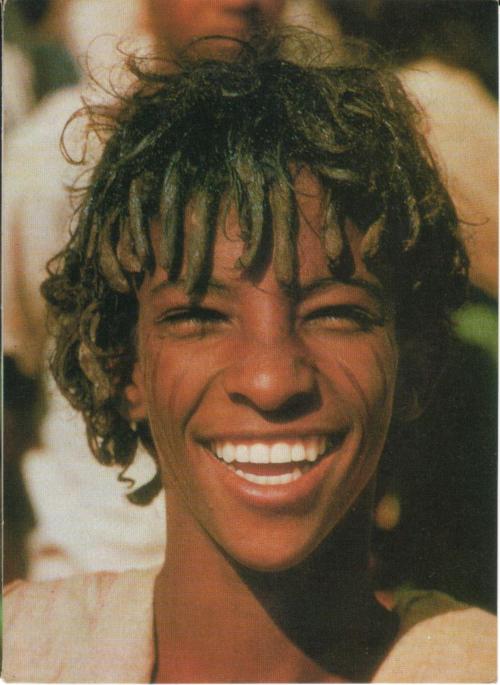 The Hedareb are mostly devout Muslims. Their social structures are based on clans and sub-clan organizations. Their lands are own by clans. 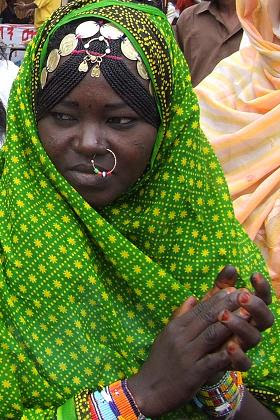 THE ORIGIN OF HADAREB PEOPLE
A Study in Arab-Beja Relationships
by A. PAUL, Pages 75-78
It is, I believe, one of the most firmly held tenets of anthropologists that where Hamite and Semite have intermingled it is the latter strain which predominates in language, custom, and racial characteristics in general.
There are, however, exceptions to this as to nearly every rule, and one of them is to be found among the medieval Beja of the Sudan. Although for hundreds of years the descendants of Arab immigrants from the Hadramaut and Egypt were the dominant force in the Atbai, yet in nearly every respect they are indistinguishable from the indigenous Beja among whom they settled.
At a date never precisely determined, but certainly in the Days of Ignorance prior to the Moslem era, and most probably about the end of the sixth century A.D. sections of a Himyarite tribe from Shihr in Southern Arabia found its way across the Red Sea and settled in the Atbai and possibly also further south in the vicinity of Sinkat and Erkowit.
It is probable that their arrival found the nomadic Beja tribes of that area in a more than ordinary state of flux and confusion because, not so many years before, their domination of the southern Thebaid between Ibrim and Assuan had terminated with their decisive defeat by Silko, King of the Nuba, who had ejected them from their riverain settlements and thrown them back into the inhospitable deserts from which they had come.
Crippled temporarily as a fighting power the Beja relapsed into an anarchic period of petty inter-tribal wars and disputes in which they had ability to harm none but themselves. The newcomers were not, therefore, annihilated or driven into the sea as they might have been, but were able to survive and further to improve their position by marriage with the daughters of local chiefs.
Then by reason of the matrilineal system of succession still practised among the Beja their sons succeeded to tribal leadership, and by virtue of this and a superior culture were able to establish themselves as a dominant aristocracy, partly Arab in blood, ruling over a very much larger number of indigenous Beja. serfs.
The newcomers were described as Hadareb, a local corruption of Hadarma (inhabitants of the Hadramaut) and it is quite probable that they were also one and the same people as the Bellou (derived from the Tu-Bedawie belawiet=to speak a foreign tongue).
They are so referred to by the anonymous historian of the Amarar and by Idrisi, though the name does not appear to have come into general use until about the end of the fourteenth century, when the Bellou are found struggling unsuccessfully for survival against the newly emerged and aggressive tribe of Hadendowa.
Further study of admittedly obscure and conflicting evidence leads me firmly to the conclusion, and in this I am supported strongly by local tradition, that the Bellou were in fact the Hadareb at a later stage in their history. But while they established a political and social autocracy in the Atbai the Hadareb at the same time lost almost completely their racial individually in adoption of Beja language, habits and religion, which at that time was a very nominal sort of Christianity.
Late in the sixth century they had been converted by the mission sent to Nubia by the Empress Theodora, but it is to be believed that their observance of the new religion was neither very thorough nor very strict, and they did in fact at this time worship a great variety of gods: Isis, whose statue they had once been allowed to remove from Philae for adoration in their desert fastnesses; Mandulis, for whom the Romans had built a temple at Talmis; and Min, possibly Apollo, the god of thunder.
A very considerable number also were still pagans, worshipping devils, and very much under the awe-inspiring demoniac influence of their shamans. Writing very much later, at the end of the ninth century, the Arab historian and geographer, Ya'qubi, gives a description of a Beja kingdom which he calls Tankish, lying between Assuan and Khor Baraka, containing gold and emerald mines, and inhabited by Hadareb and their very much larger serf community, the Zenafig. 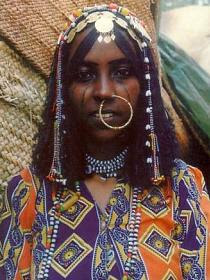 The broken remnants fled to the Samhar (the coastal plain behind Massawa) where their descendants still remain; and their position as overlords of a large serf population was usurped by a contingent of Sha'adinab/Ja'aliin who had fought in the Abdullab army, and who remained on as masters of the country, and gave to themselves and their newly conquered dependants the generic name of Beni Amer.
The name Hadareb still survives, firstly as applied to the Tu-Bedawie-speaking sections of the Beni Amer, possibly because they were remnants of former Hederib serfs, and secondly, in slight amended form, Hadarba, to all traders of Arabian origin, the Sheikh of the Arteiga in Suakin for long being known as the
Emir el Hadarba.
There seems little doubt that the three great tribal confederations mentioned above have for their ancestors the one-time serf peoples of the Atbai who were under Hadareb rule. So anxious have they been, however, to claim Arab ancestry, the Beshariin and Amarar from the Aulad Kahil, and the Hadendowa from the Ashraf, that their true tribal antecedents have been forgotten, and their knowledge of their pre-Islamic history is more than usually vague and incorrect.
And yet despite the infusion from Arabia of not a little of the blood both of Joktan and of Ishmael they remain in nearly everything essentially and unmistakably a Hamitic people.
Source: Carolina Rediviva University Library
Uppsala - Sweden
SOURCE:http://www.hafash.org/index.php?option=com_content&view=article&id=160&Itemid=219