Nama (Namaqua) people are the nomadic, aboriginal Khoe-Kwadi and Afrikaans-speaking people that forms a sub-set of the larger Khoikhoi ethnolinguistic group of South Africa, Namibia and Botswana. The Nama are the largest group of the Khoikhoi people, most of whom have largely disappeared as a group, except for the Namas. 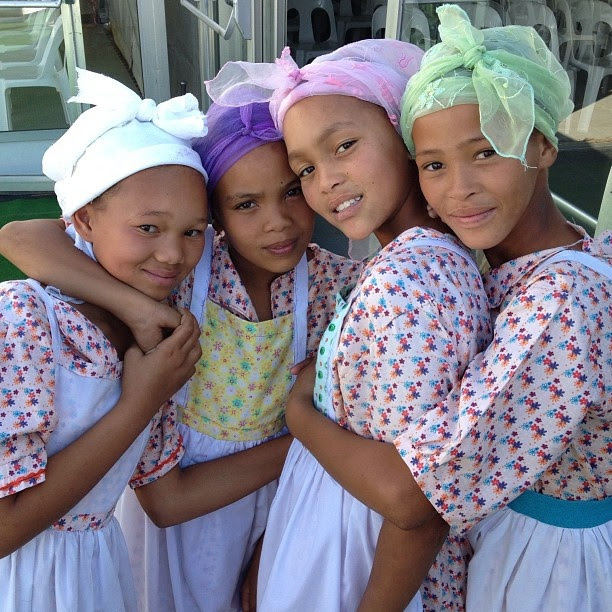 Nama people and Herero people were historically exterminated by the German`s in their first world genocidal experiment which became famously known as Herero and Namaqua Genocide.  A  letter  written  by  a German  missionary to  his colleagues  captures the  violent sentiment  among Germans  in Hereroland supporting  the  annihilation of the Hereros and Namas:
"The  Germans  are  consumed  with  inexpiable  hatred  and  a terrible
thirst  for  revenge,  one  might  even  say  they  are  thirsting  for  the
blood  of the  Herero[s].  All  you  hear these  days  is  "make  a  clean
sweep,  hang  them, shoot  them  to the  last man,  give  no  quarter."  I
shudder  to  think  what  may  happen  in  the  months  ahead.  The
Germans will  doubtless exact a grim vengeance."

At least 80% of the total Nama and Herero populations perished. This was motivated by the German desire to establish a prosperous colony and this entailed the displacement of the indigenous people from their agricultural land. Large herds of cattle were confiscated and Nama and Herero people were driven into the desert and in some cases interred in concentration camps on the coast, for example at Shark Island. Additionally, the Nama and Herero people were forced into slave labour to build railway lines and to hunt for diamonds during the diamond rush.

A traditional dance of the Richtersveld, Northern Cape

The Nama people who were initially with the German`s changed their mind and fought alongside their Herero brethrens under the great Nama leaders Hendrik Witbooi.Under the command of von Trotha, the German army sought to engineer a crushing defeat of the Herero in the vicinity of the Waterberg (Pool, 1979: 210—11). In keeping with von Moltke's principles of separate deployment and encirclement, von Trotha sent his armies to annihilate the Herero at the Waterberg. Or, as he put it in his own words:
My initial plan for the Operation, which I always adhered to, was to encircle the
masses of Hereros at Waterberg, and to annihilate these masses with a simultaneous
blow, then to establish various stations to hunt down and disarm the
splinter groups who escaped, later to lay hands on the captains by putting prize
money on their heads and formally to sentence them to death. (von Trotha's
diaries cited in Pool, 1991: 251).

Nama mother and child from Namibia

Many of the Nama clans live in Central Namibia and the other smaller groups live in Namaqualand, which today straddles the Namibian border with South Africa. As descendants of the Khoekhoe the Nama resemble the San and the Topnaar  in appearance and language. The Nama are a musically talented people and songs and poetry are handed down through the generations. Nama women are highly skilled artisans, their embroidery and appliqué work, regarded as an art form, consists of brightly colored scenes inspired by the environment and the lifestyles of the Nama people.
This nomadic tribes traditionally moved with their cattle and portable huts. The huts are constructed of rush-mats and wooden structures. The only place, where this traditional lifestyle still exists, is the South African section of the /Ai-/Ais Richtersveld Transfrontier Park.

Today, there are 13 Nama tribes, for the most part still practicing communal land ownership. There are 246 000 in Namibia, 776,000 in South Africa and to a lesser degree 1600 in Botswana.
In Namibia Nama people are at Sesfontein in Kaokoland, in the far south at places like Warmbad, or around Mariental, Tses, Gibeon, Maltahöhe, Helmeringhausen and east of Lüderitz in the southwestern corner of county.

Dancing Nama people
Language
They traditionally speak the Nama language of the Khoe-Kwadi language family, the characteristic clicks are common to the languages of all Khoisan tribes. Many others also Nama also speak Afrikaans

History
The Nama people indigenous who are descendants of the larger Khoikhoi ethnolinguistic group are aboriginal people of South Africa. They settled in South Africa thousands of years alongside the San people long before the Bantu migrants came to South Africa. 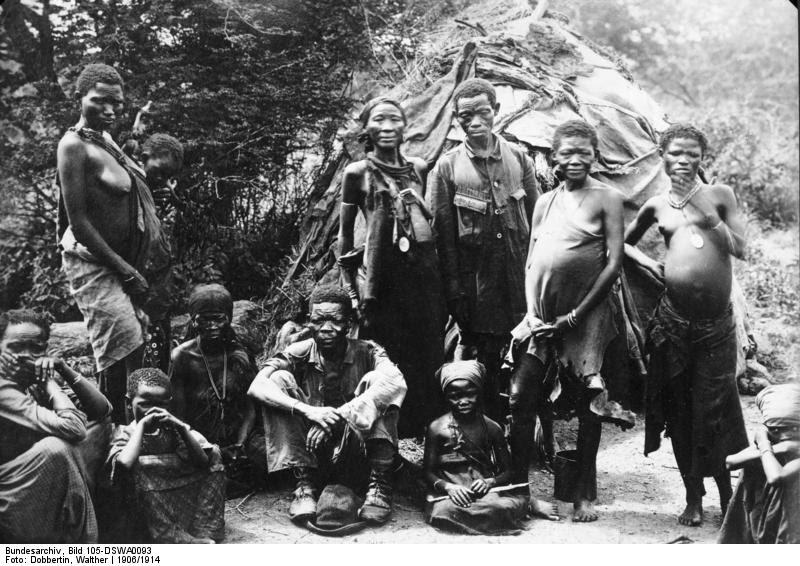 Nama Chief Jan Jonker Afrikaner led his tribe further north into central Namibia. As pastoral nomads the Nama often clashed with the Herero who were also looking for better grazing.The early colonialists referred to them as Hottentots. Their alternative historical name, "Namaqua", simply stems from the addition of the Khoekhoe language suffix "-qua/khwa", meaning "people" (found in the names of other Southern African nations like the Griqua)
The conflicts came to an end when the German colonialists arrived and waged war on both peoples. Hendrik Witbooi was a prominent figure in the Namas’ struggle against the colonialists and is now pictured on the N$ 10 note.
Herero and Nama Rising
The great Herero Rising under Samuel Maherero
In January 1904, the great Herero Rising under Samuel Maherero began in Okahandja. Apparently, it had been planned for a long time. The rebellion quickly spread through the whole Herero region and Damaraland. 123 white men died, rail tracks and telephone connections were interrupted, farms and public buildings rose in flames. Only when the German protection troops engaged, the tide turned. In spite of an enforcement to as many as 15 000 soldiers, it became clear that the insurgents were well armed and well versed in the art of war. General Lieutenant von Trotha, who had taken over command of the German troops from Mayor Leutwein, did not share his predecessors view that the Herero had been punished enough and the main task in the protectorate was to keep up the very important work strength of this people. Von Trotha wanted to eradicate the Herero people. In the battle of Waterberg, in August 1904, von Trotha closed in on thousands of Herero, leaving them only one route of escape: the path to the waterless dry savannah of Omaheke. He drove the Herero people into the desert. Three quarters of all Hereros died in this war of extermination. 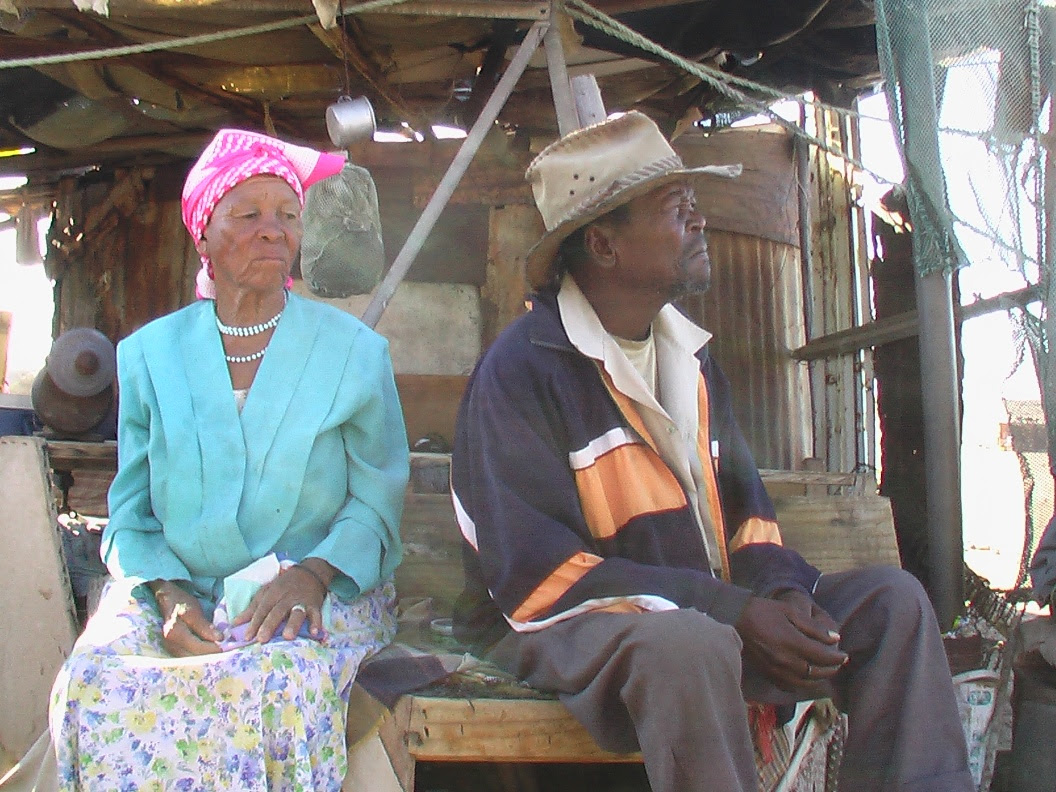 The Nama Rising under Hendrik Witbooi
At the same time, the Nama rose against the Germans. They fought a bitter guerrilla war, lead by Hendrik Witbooi and Jacob Morenga. Witbooi died in October 1905 in an attack on a German supply transport. Witbooi’s resistance was dead, but his followers kept fighting. new leaders stepped in at the head of the movement. The last of them was Jacob Morenga. He was killed in 1907 by Cape police when he tried to organize operations against the Germans out of the cape region. Apparently, the British were concerned that Morenga might create turmoil in the cape region, as well.
After 1907, the Nama and Herero tribes were as good as exterminated. Between 20 000 and 30 000 Herero had died up to that date. About 2 500 Germans had lost their lives in the fights. All Black people were denied the right to own land or cattle, the tribal areas and occasional property were confiscated. Many members of the tribes died in concentration camps, survivors were “resettled” in reservations. Tribes in more remote areas like the Ovambo, Damara, Himba and the Rehoboter Baster were affected by this development.

Following the discovery of diamonds at the mouth of the Orange River in the 1920s, however, prospectors began moving into the region, establishing towns at Alexander Bay and Port Nolloth, a process that accelerated the appropriation of traditional lands that had begun early in the colonial period. Under apartheid, remaining pastoralists were encouraged to abandon their traditional lifestyle in favour of village life. In 1991, a portion of Namaqualand (home of the Nama and one of the last true wilderness areas of South Africa) became the Richtersveld National Park. In December 2002, ancestral lands, including the park, were returned to community ownership and the governments of South Africa and Namibia embarked on the development of a transfrontier park from the west coast of southern Africa to the desert interior, absorbing the Richtersveld National Park. Today, the Richtersveld National Park is one of the few places where the original Nama traditions survive. Here, the Nama still move with the seasons and speak their language. The traditional Nama dwelling – the |haru oms, or portable rush-mat covered domed hut – is a reflection of a nomadic way of life, offering a cool haven against the blistering heat of the sun, yet easy to pack and move if grazing lands become scarce.

At the dawn of the 19th century, Oorlam people encroached Namaqualand and Damaraland. They likewise descended from indigenous Khoikhoi but are a group who mixed with slaves from Madagascar, India, and Indonesia.[ After two centuries of assimilation into the Nama culture, many Oorlams today regard Khoikhoigowab (Damara/Nama) as their mother tongue. The distinction between Namas and Oorlams has gradually disappeared over time to an extent where they are today regarded as one ethnic group, despite their different backgrounds 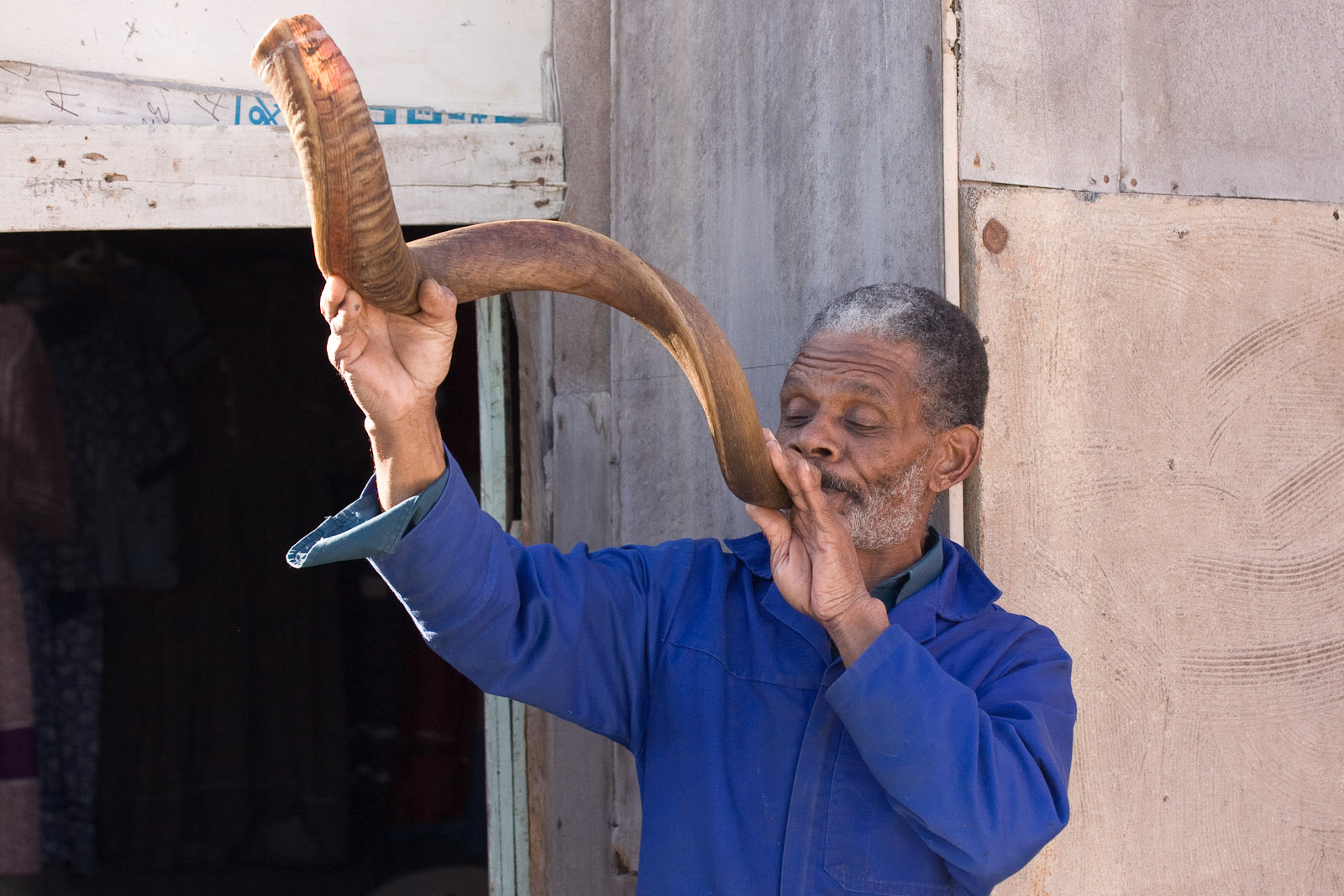 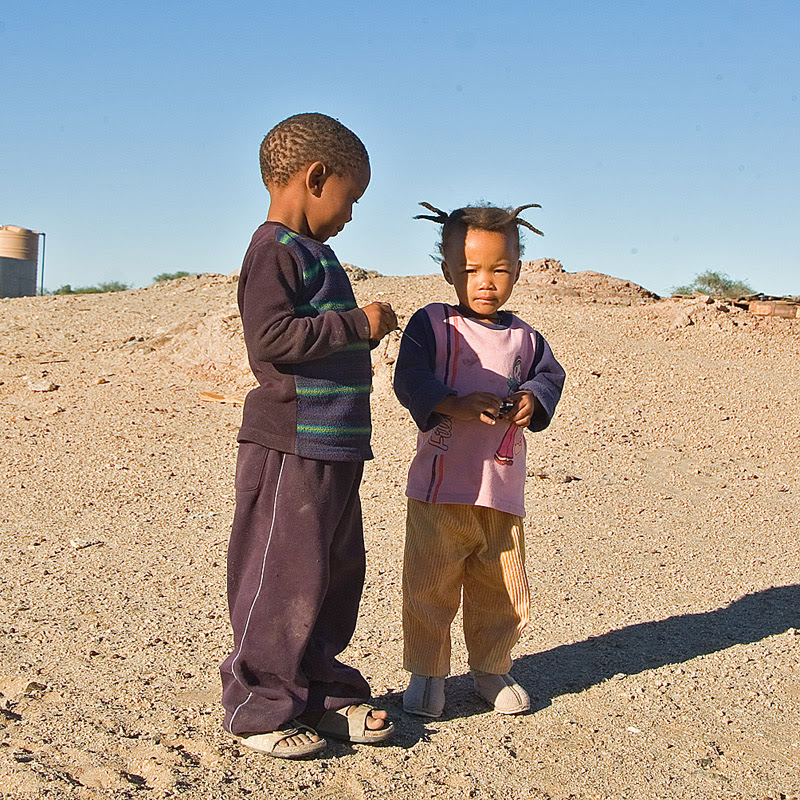 Wedding ritual
Namas have a complicated wedding ritual. First the man has to discuss his intentions with his family. If they agree they will advise him of the customs to ask the bride's family and then accompany him to the place she lives. The yard at the bride's living place is prepared prior to the future husband's family's arrival, animal hides are laid out in the corners for the different groups to sit down and discuss.
The groom's family ask for the gate to be opened. If this is granted, the groom is interrogated about details of the bride, including the circumstances of their first meeting and how to identify her body marks to make sure both know each other well. If the bride is pregnant or already has children from her future husband or someone else, the bride is subjected to the "door cleansing" ceremony (slaughtering and consuming a snow-white goat). After several days the wedding ritual continues in reverse; the bride's family visits the clan of the groom. If all is to the satisfaction of the two clans, an engagement day is announced.
At the engagement, the groom's family brings live animals to the woman's family home. The animals are slaughtered, hung on three sticks, and each part is offered to the bride's family. Other items like bags of sugar or flour are only offered in quantities of two or four to indicate that there will always be abundance of food. This process is also celebrated in reverse at the man's family home. White flags are mounted on both family's houses which may not be taken off but wither or are blown off by the wind one day.
The wedding preparations can take up to one year. The family of the groom makes a gift to the bride's mother, traditionally a cow and a calf, for she has raised the bride at her breast. A bargaining process accompanies the gift that can take weeks in itself. On wedding day, both families provide animals and other food and bring it to the bride's home. The wedding itself takes place in a church. Festivities afterward go on for several days. The first night after the wedding the couple spends separately. On the next morning, they set off for their own home

For more on Nama people search Khoikhoi people on my page.
source:http://www.namibiatourism.org/people/nama