The Bana (Banna or Bena) people who are sometimes referred to as Hamer-Bana are indigenous pastoral and semi-nomadic people living in the harsh environment of lower Omo Valley region in Ethiopia.

Their neighbours are Hamer people and it is believed that Bana people actually originated from the Hamer centuries ago. 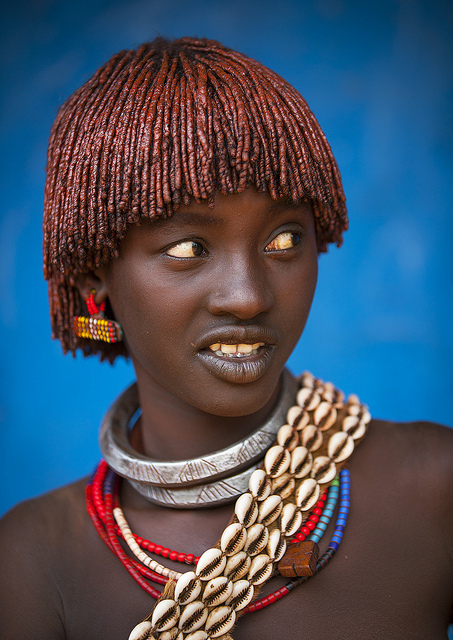 The Bana are primarily located in the Gemu Gofa province, which is east of the Omo River and north of Lake Turkana. This area, called the Lower Omo region, has remained one of the most inaccessible and least developed part of East Africa (Kenyan border). They are closely related to their neighbors, the Hamar, in both language and culture.

Apart from Bana people being pastoral tribe whose culture revolves around cattle and their harsh environment forcing them to be semi-nomadic, during the dry season, the men walk long distances with their herds looking for water and grass, and also to harvest wild honey. Honey collection is now one of their major activities when not herding. The markets in Key Afer and Jinka are often visited by them.

The Bana practice ritual dancing and singing. The men often have their hair dressed up with a colorful clay cap that is decorated with feathers. Both the men and women wear long garments and paint their bodies with white chalk. Women of the tribe wear beads in their hair that is held together with butter.

Language
The Bana people speak Hamer-Banna language which is quite similar to Hamer language.

Bana woman from Jinka, Ethiopia wearing the hairstyle of a married woman. photo by Eric Lafforgue

History
They belong to a group of culturally distinct people known as Hamer. Linguistic and cultural studies have shown that in the past, the Bana people were core parts of the larger indigenous Hamer ethnic group. The Bana people came out of Hamer people as a result of disagreement and migration in search of better pastures to breed their cattle.

Bana warriors in their traditional costume

Economy
Most of the Bana are cattle breeders. Herds belonging to the Bana consist mainly of cattle, although there are some sheep and goats. Camels are used for riding and as pack animals. Most Bana plant fields of sorghum at the beginning of the rainy season before leaving on their annual nomadic journey.

Some households also plant sesame and beans. Because the crops are usually left unattended, the yields are low. Few households grow enough grain to last through the year.
In dry seasons honey collection is the major economic activity of the Bana people.

Social system,culture and tradition
The Bana live in camps that consist of several related families. The families live in tents arranged in a circle, and the cattle are brought into the center of the camp at night. When the campsite is being set up, beds for the women and young children are built first; then the tent frame is built around it. The tents are constructed with flexible poles set in the ground in a circular pattern. The poles are bent upward, joining at the top, then tied. The structures are covered with thatch during the dry season and canvas mats during the rainy season. Men and older boys usually sleep on cots in the center of the camp, near the cattle. 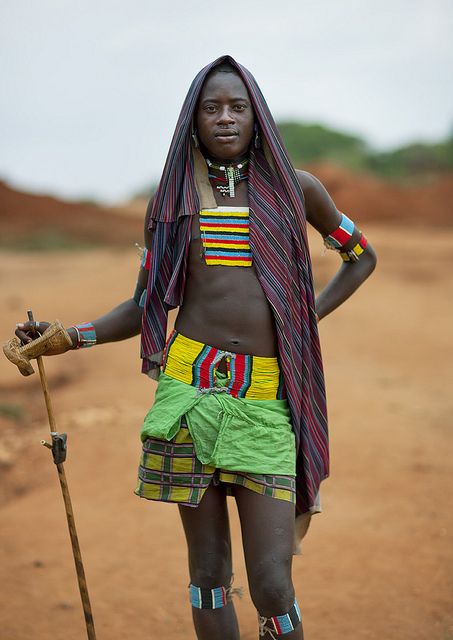 There are at least 27 words for the subtle variations of colours and textures of a cattle! And each man has three names: a human, a goat and a cow name.

Bana society consists of a complex system of age groups. To pass from one age group to another involves complicated rituals.
Just like the Hamer people, in order for young Bana tribesmen to qualify for marriage, own cattle and have children, they must face up to a unique dare, known as the bull-leaping ceremony. It’s also a rite of passage to mark the boys’ coming of age.

Cows are lined up in a row. Each boy, naked, has to make four clean runs over the backs the cows, without falling. Success gains him the right to marry. During this impressive display, the young man is accompanied by women of his tribe. They dance and sing, encouraging him.

Bana man with a colorful headband and decorated painted body

Men may marry as many women as they like, but only within their own tribe. A "bride price" of cattle and other goods is provided by the prospective husband and his near relatives. A typical household consists of a woman, her children, and a male protector. A man may be the protector of more than one household, depending on the number of wives he has.

Also, men are sometimes assigned the responsibility of protecting a divorced woman, a widow, or the wife of an absent husband (usually his brother). Marriage celebrations include feasting and dancing. Young girls as well as boys are circumcised.

Just like most of the indigenous tribes in the lower Omo Valley, the Bana practice ritual dancing and singing. The men often have their hair dressed up with a colorful clay cap that is decorated with feathers. Both the men and women wear long garments and paint their bodies with white chalk. Women of the tribe wear beads in their hair that is held together with butter. 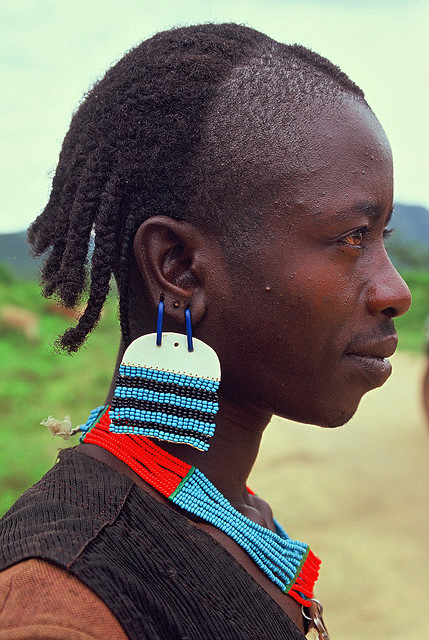 Bana man with his awesome hairstyle 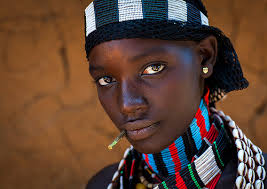 This kid from Bana tribe in Ethiopia has a special hairstyle that the parents do in many tribes: they made him the ugliest possible. It is not a punishment, but a way to prevent the child to be attacked by the devil eye and the bad spirits