Isabel dos Santos popularly known in the world business circles as "Princess" is an Angolan billionaire, investor and the richest woman in Africa. She is the oldest daughter of Angola's president, Jose Eduardo dos Santos and she currently debuted on the Forbes 2013 list of the World's Billionaires with a fortune estimated at a minimum of $3 billion. This makes her Angola's first billionaire, 31st richest person in Africa and 736th billionaire in the world. At 40, Dos Santos is married to Congolese businessman Sindika Dokolo and has 3 children.

However, the new revelation about her estimated 6.9% stake in Portuguese oil company GALP combined with some dividends and a rising stock price at ZON, has pushed Isabel dos Santos’ estimated net worth up by another $1 billion to $3 billion after 2013 Forbes Billionaires list came out and she now qualifies as the authentic richest woman in Africa as well as the continent’s youngest.


Dos Santos is something of an enigma who has quickly and systematically garnered significant stakes in Angola’s strategic industries–banking, cement, diamonds and telecom–making her most influential businessperson in her homeland. More than half of her assets are held in publicly traded Portuguese companies, adding international credibility. Isabel has an asset -- worth a conservative $1 billion -- is a 25% stake in Unitel, one of Angola's two mobile phone networks, where Isabel dos Santos is a board member. She also sits on the board of Angola's Banco BIC, where she also has a 25% stake. In Portugal, she owns nearly 15% of ZON Multimedia, a listed cable TV company, and 20% of Banco BPI, one of Portugal's largest publicly traded banks.

Isabel was born in 1973 in Baku, Azerbaijan to President Dos Santos` first wife, Tatiana Kukanova a Russian chess champion. She had her education at St Paul’s, a private school in London and proceeded to King's College also in London, where she obtained a degree in electrical engineering. After her studies she returned home and immediately ventured into business.

At the age of 24 Isabel had her formative business experience when in 1997 she entered into partnership with Rui Barata, the owner of Miami Beach, a rustic chic beach-side bar and restaurant in Luanda, whose business was taking a nosedive. Isabel`s management and cash turned the business around. She then worked as a project manager engineer for Urbana 2000,a subsidiary company of Jembas Group, that won the contract for cleaning and disinfection of the city. Over a period of nearly 20 years she expanded her business interests continuously and this led her to create several holdings, in Angola and mostly abroad, and to make substantial investments in a series of prestigious enterprises, especially in Portugal.

Today, Isabel dos Santos has interests in telecommunications, media, retail, finance and the energy industry, both in Angola and in Portugal. Her commercial interest in oil (after her partner Amorim Energia acquisition of 33.3% stake in Galp Energia), and her estimated 6.9% stake in Galp is worth a recent $924 million. In partnership with Amorim and Fernando Teles, culminating in the opening of Banco Internacional de Credito, known as BIC, Isabel holds and with the Bank`s assets of $6.9 billion in 2012, Isabel dos Santos’ stake is worth at least $160 million. 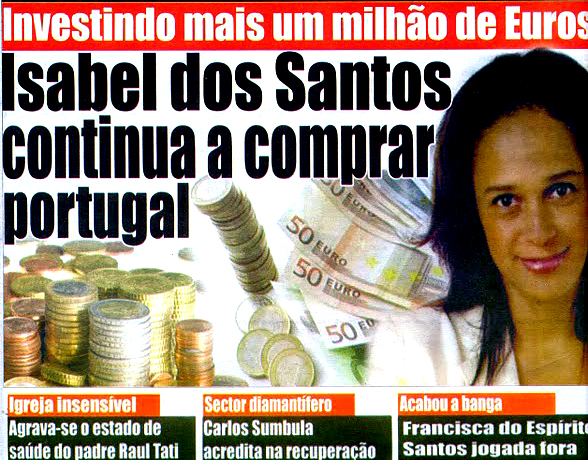 Indomitable Isabel dos Santos holds a 24.5% stake in a diamond company, Ascorp through a Gibraltar investment company, Trans Africa Investment Services, that she set up with her mother. In telecommunications, she own 25% stake in Unitel, Angola`s largest private company with over 9 million subscribers that raked $2 billion revenue, making her share worth at least $1 billion. Isabel who also chairs Nova Cimangola (Angola`s state-owned Cement factory), has 30% stake in it through her Ciminvest. With 51% control of Condis, Isabel dos Santos signed a joint partnership with the Portuguese Sonae group in April 2011 for the development and operation of a retail trading company in Angola. The entry in Angola by the Portuguese group led by Paulo de Azevedo will be performed by the Continente (Angola), which will open the first supermarket by 2013 in Angola.

She recently acquired the mobile operator T+, in Cape Verde and gained the license for the establishment of the second telecom operator in São Tomé and Príncipe.
In 2012 Isabel Dos Santos was given Lifetime Achievement Prize for Entrepreneurial Excellence in Africa by Millenium Excellence Foundation. On humanitarian side she is the President of Angola Red Cross.