“Don’t let anything stop you. There will be times when you’ll be disappointed, but you can’t stop. Make yourself the best that you can make out of what you are. The very best.” 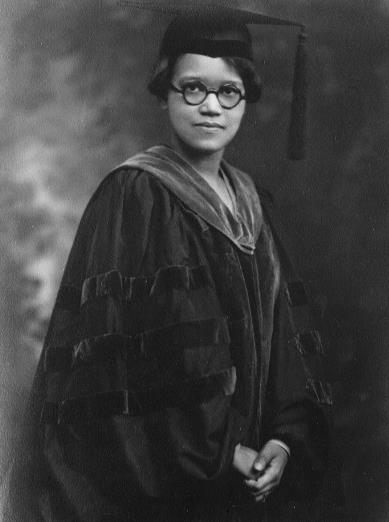 Do you see the credentials that follow that name? Mind boggling isn’t it. Well add to them Alexander’s place as the first black woman to earn a Ph.D. in the United States, the first woman to receive a law degree from the University of Pennsylvania Law School, first black woman admitted to the Pennsylvania Bar, first national president of Delta Sigma Theta Sorority, Incorporated (ΔΣΘ) as well as wife to civil rights attorney and man of Alpha Phi Alpha Fraternity, Incorporated (ΑΦΑ),  Raymond Pace Alexander and mother to Mary Elizabeth Alexander Brown (born 1934) and Rae Pace Alexander Minter (born 1937). 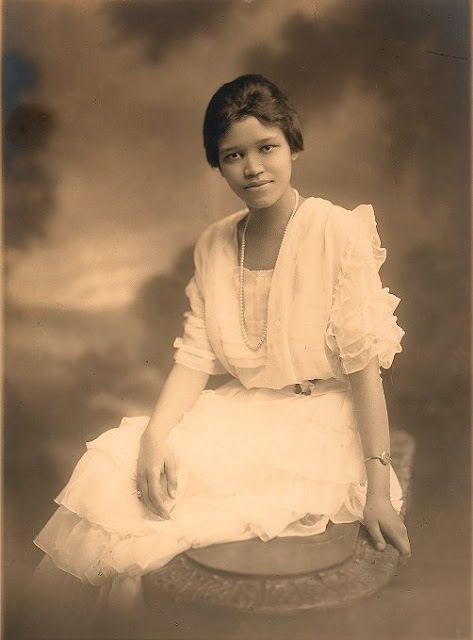 “I knew well that the only way I could get that door open was to knock it down; because I knocked all of them down.”
Born Sarah Tanner Mossell in Philadelphia in 1898, her maternal grandfather was African Methodist Episcopal Church Bishop Benjamin Tucker Tanner who, was awarded a Doctor of Divinity degree from Wilberforce College in 1878 and served as editor of The Christian Recorder (1868-84) and the AME Church Review (1884-88). Her mother Mary Louise Tanner Mossell’s siblings included painter Henry O. Tanner and physician Hallie Tanner Dillon Johnson, founder of the Tuskegee Institute Nurses’ School. Alexander’s father Aaron Albert Mossell II was the first black graduate of the University of Pennsylvania Law School and his brother Nathan Tanner Mossell was the first black medical graduate from University of Pennsylvania. 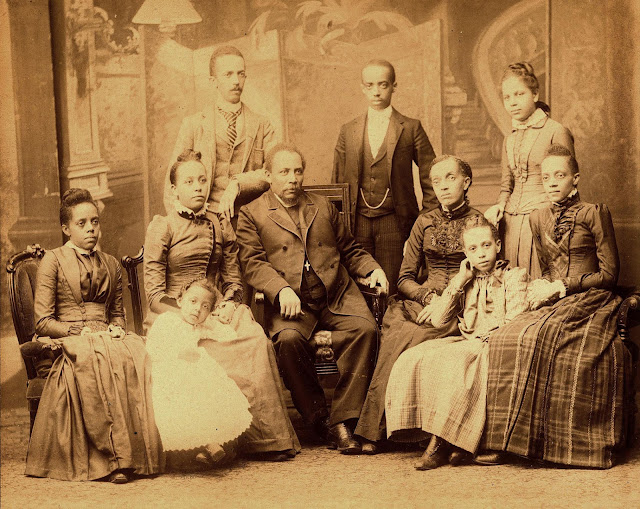 'I think I've died and gone to (s)hero heaven."

When she was just one year old, her father deserted the family, leaving her mother to care for her as well as her older sister Elizabeth and brother Aaron.  Alexander would later recall, “Now my father deserted my mother, and I tell you this because it is often thought that without a man in the house you can’t do anything, but my mother did it all. And I often thought that perhaps it was God’s will that he got out. So there wasn’t any arguing.”  Alexander did not however, learn of her father’s desertion until she was an eighth-grader.
Despite describing her mother as “a brilliant woman,” Alexander keenly noted that even so, “she never got over my father’s leaving her.” Her mother would suffer with bouts of depression throughout her childhood but was aided by her sister Sadie Moore, who was married to Howard University Dean Lewis Baxter Moore. 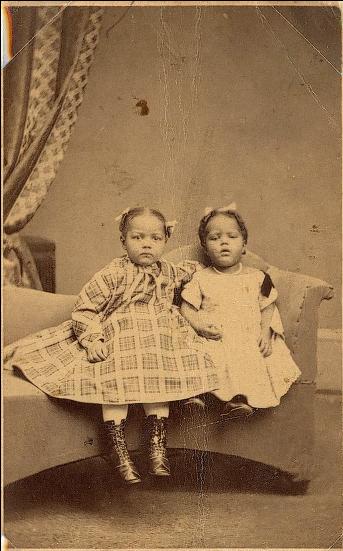 Infant Sadie Alexander with older sister Elizabeth (r), c. 1900
Alexander attended high school at the M Street High School (later Dunbar High School) in Washington, D.C., where she was encouraged to continue her education by the historian, Carter G. Woodson. After high school.Alexander received a scholarship from Howard University; but her mother demanded that she attend the University of Pennsylvania,where her family had strong ties. Her father, Aaron Albert Mossell, was a graduate of Lincoln University and the first African American to graduate from the University of Pennsylvania Law School in 1888. Her uncle was Louis Baxter Moore, the first African American to receive a Ph.D. from the University of Pennsylvania.Alexander was furious but obedient.
She began her academic career at Penn in the fall of 1915. There, she endured racism and sexism from all quarters during her collegiate career; but found strength in the support of her family and faith in God. She later recalled, “I concluded [while still an undergraduate student] that I could not single-handedly make any changes in the position of women at Penn or of the people of my race and that it was best for me to secure an outstanding record and a solid education so that when I entered public life I would have the background to assume responsibility and leadership.” And so she began each day with the prayer: “God, give me the strength to do my assignments the very best I have the ability. And Dear Lord, teach me to walk alone and not be lonely, knowing Thou art at my side.

Christian faith was also the centerpiece of Delta Sigma Theta Sorority, a fledgling women’s organization which had been founded by twenty-two women on the campus of Howard in 1913. “At this high point of the Progressive Era,” wrote Paula Giddings in the 1988 publication In Search of Sisterhood: Delta Sigma Theta and the Black Sorority Movement, “Howard, Afro-American and women were on the move–and so were the twenty-two coeds who saw themselves an integral part of the developments swirling around them” (47). The same year of its founding, Alexander was approached by the Sorority’s founders to help establish a chapter on Penn’s campus. When the Gamma Chapter of Delta Sigma Theta was founded five years later in 1918, Sadie Tanner Mossell Alexander was among its five founding members. Early on in the history of black Greek-lettered organizations (BGLO) “there was a greater need for a heaven against discrimination” on white college campuses (18). With a sense of racial obligation, BGLOs combated racism and sexism by offering support and camaraderie among blacks who faced not only social segregation but also academic ostracism. 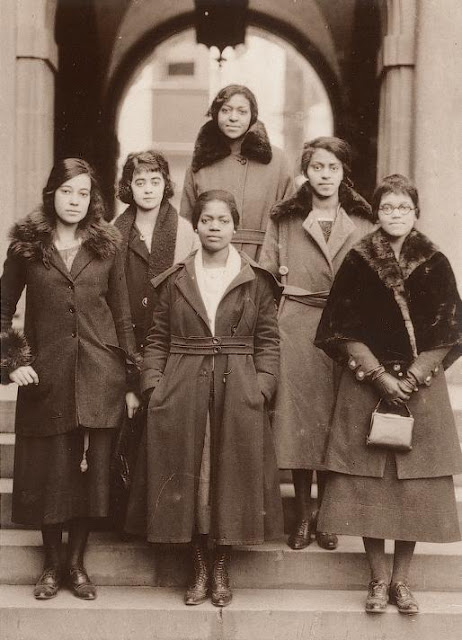 Gamma Chapter of Delta Sigma Theta, 1921
In 1918, Alexander received a B. S. in Education with senior honors, and in 1919, a M.A. in Economics, both from the University of Pennsylvania and was awarded the Francis Sergeant Pepper Fellowship in economics, which enabled her to study for her doctorate . In 1921, she received a Ph.D. in economics from the University of Pennsylvania's Wharton School, becoming one of the first black women to receive a doctorate and the first African American to receive a Ph.D. in economics. The title of her dissertation was, "The Standard of Living among One Hundred Negro Migrant Families in Philadelphia." Alexander was proud of her graduation, "I can well remember marching down Broad Street from Mercantile Hall to the Academy of Music where there were photographers from all over the world taking my picture." While at the University of Pennsylvania, Alexander was active in the Gamma Chapter of the Delta Sigma Theta Sorority, which was the first African-American sorority at the University. In 1921, she became the first president of the Grand Chapter, the national organization of Delta Sigma Theta, serving for five years. 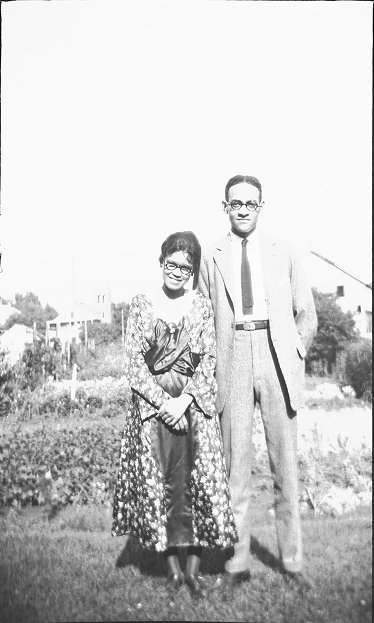 After graduation from the University of Pennsylvania, she became an actuary with the black-owned North Carolina Mutual Life Insurance Company. In 1923, she married Raymond Pace Alexander, the brother of her friend and sorority sister Virgina Alexander who had just received his law degree from Harvard University and admitted to the Pennsylvania State Bar. Shortly after her marriage, she returned to college to study for a law degree where she became the first black woman to serve as editor of the Law Review. In 1927, she became the first African-American woman to receive a L.L. B. from the University of Pennsylvania Law School, and be admitted to the State Bar and practice law in Pennsylvania. She joined her husband's law firm and together they fought against discrimination and segregation in Philadelphia restaurants, hotels, and theaters.The Alexanders were a formidable duo and one of the earliest husband and wife legal teams in the United States. She was the first African-American woman to serve as assistant city solicitor of Philadelphia, and was elected secretary of the National Bar Association in 1943, the first woman to hold a national office in the Association.

In 1947, President Harry S. Truman appointed Alexander to the President's Committee on Civil Rights. The report, issued during her tenure, entitled To Secure These Rights, became the basis for future civil rights policy decisions and legislation. In 1959, she opened her own law office and practiced there until 1976 when she joined the law firm of Atkinson, Myers and Archie. While practicing law, Alexander was active in over thirty local and national civic organizations. 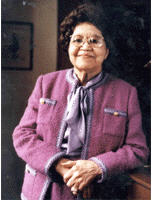 In 1974, Alexander received a fifth degree from the University of Pennsylvania, an honorary degree of Doctor of Laws. Part of the citation read: "As an active worker for civil rights, she has been a steady and forceful advocate on the national, state, and municipal scene, reminding people everywhere that freedoms are won not only by idealism but by persistence and will over a long time." In 1978, at the age of eighty-one, Alexander was appointed chairperson of the White House Conference on Aging. She died on November 1, 1989.

According to McLean Tobin, author of The Black Female Ph.D., "Black professional women may shed light on the unique experience of a group that has conquered double discrimination. In most cases being both black and female produces a defeating situation." Sadie Alexander overcame this "double jeopardy," and paved the way for her "sisters" to pursue doctoral degrees.
Source:http://chiefcrystal.wordpress.com/2011/03/07/sweet-sadie-sadie-tanner-mossell-alexander-that-is/