Thirty years of black and Diaspora studies have shed light on the scale, intensity and impact of the Trans-Atlantic Slave Trade -- the 400-year traffic of Africans between the continent, Europe and the colonies of the alleged new world. Less attention has been paid, though, to the millennium-long slave trade that scattered African slaves throughout present-day Iraq, Turkey, Kuwait, Iran, Pakistan and India. Emerging European capitalism and the labor requirements of cash crops like sugar, cotton and tobacco drove the Trans-Atlantic trade; the Trans-Saharan trade, which flourished from the eighth century AD through the 1840s, brought African labor to the hazardous enterprises of pearl diving, date farming and the raw, brutal work of clearing Iraqi salt marshes. African boys were commonly castrated to serve as eunuch guards of royal harems. Unlike those who were enslaved in the West, however, blacks enslaved in the Arabic-speaking world also served as guards, sailors and high-ranking soldiers. In the 19th century, Basra was one of the most profitable slave ports in the region, commonly offering slave traders as much as 50% returns upon their "investments." 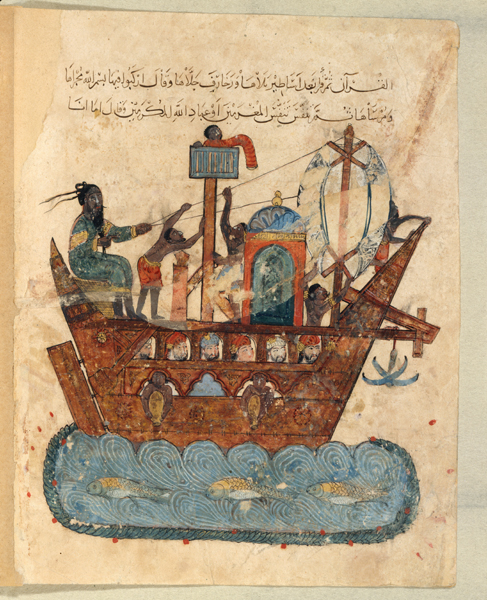 Southern Iraq
As early as the fifth century Arabs brought Africans to southern Iraq to work in their date plantations and salt marshes. But not all the enslaved were of African origin; some were white, namely Circassians and Georgians from the Caucasus. With the growth of salt mining in the area of Basra, however, the African presence increased throughout the Gulf Coast of Iran and led to a series of violent uprisings beginning in the seventh century and culminating with the Zanj rebellion. 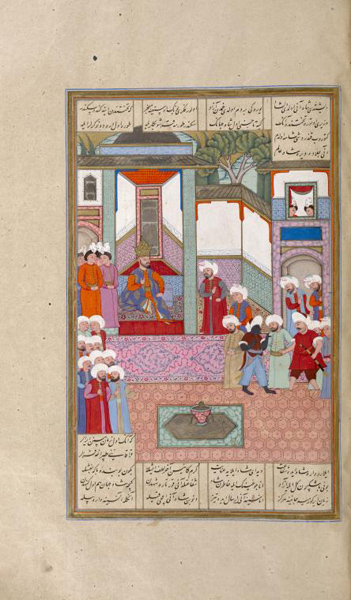 Qaydrush Disguised as Iskandar (Spencer Collection, Stephen
A. Schwarzman Building, The New York Public Library.) *The Shâhnâmah, or The Book of Kings, by the poet Adbul Kasim Mansar Firdausi (c. 940-1020) is the Persian national epic. It recounts the history and exploits of the pre-Islamic kings and knights, including Alexander the Great (Iskandar). This illustration accompanies a Turkish translation (1616-1620). A black man is portrayed at the court.*

There has been a black presence in Basra -- present-day Southern Iraq -- as early as the 7th century, when Abu Bakra, an Ethiopian soldier who had been manumitted by the prophet Muhammad himself, settled in the city. His descendants became prominent members of Basran society. A century later, the writer Jahiz of Basra wrote an impassioned defense of black Africans -- referred to in Arabic as the Zanj -- against accusations of inferiority which had begun to take root even then.

The Zanj, who were primarily persons of East African descent, were to have a significant impact upon Iraqi history. They had been traded from ports along the African coast (Zanzibar, which is derived from the term "Zanj," was a major slave exporting center during the era) to clear salt marshes. Laboring in miserable, humid conditions, the Zanj workers dug up layers of topsoil and dragged away tons of earth to plant labor-intensive crops like sugarcane on the less saline soil below. Fed scant portions of flour, semolina and dates, they were constantly in conflict with the Iraqi slave system. Between the 7th and 9th centuries, the Zanj staged three rebellions, the largest of which occurred between 868 and 883 AD,minting of currency and the decade-long control of Basra -- one of the most important trade ports in the Abbasid empire. At their zenith, the Zanj armies marched upon Baghdad and got within 70 miles of the city.

The Zanj uprising was crushed in 883 by the Abbasids, but doing so required vast amounts of the empire's extensive resources. African slavery in Iraq continued to exist throughout both the Ottoman and British empires which incorporated the region into their holdings. In the mid-19th century, decades after the Trans-Atlantic trade had been (technically) outlawed, the Arab trade persisted. As historian Joseph Harris writes in his African Presence in Asia:

"From Kuwait, slave parties were dispatched in small groups on land and sea to Zubair and Basra, where brokers sold slaves in their homes. The surplus was marched along the Tigris and Euphrates rivers to Baghdad.'

British officials during the era noted how widespread slave ownership was among the Iraqi families. 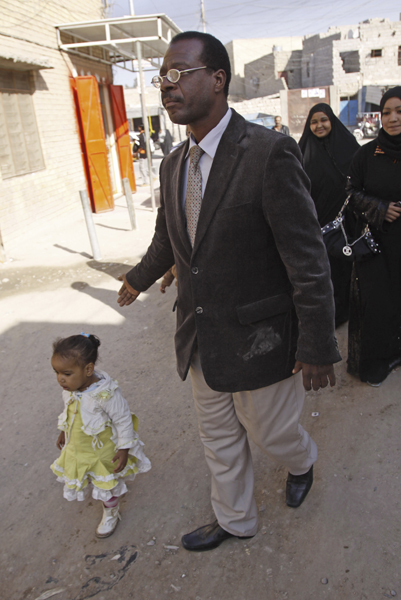 Salah al-Rekhayis, an Afro-Iraqi and a candidate for provincial council,
campaigns in 2009.
The descendants of the Zanj exist in the region today in (often self-contained) communities with names like "Zanjiabad, Iran" that hint at the history of the peoples living there. The status of these black Iraqis is little discussed -- though Iranians have written of persistent racism and stereotypes directed at the Zanj in their country.
Afro-Iraqis represent 5 to 6 percent of the total population. To combat racism, they formed the Movement of Free Iraqis in July 2007. It demands the recognition of blacks as an official minority, an apology for slavery, laws against racial discrimination, and representation in Parliament. 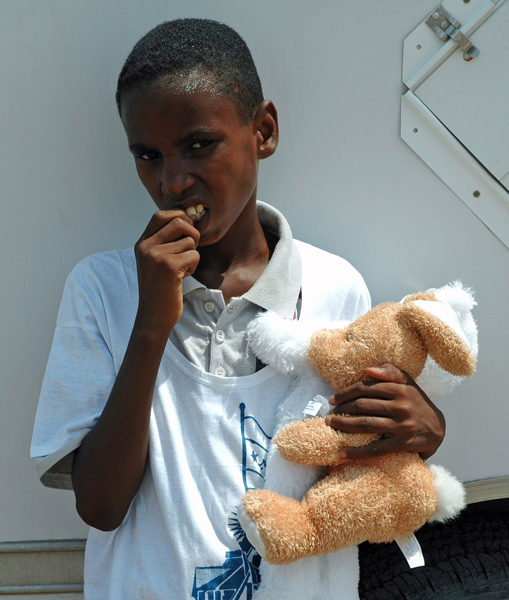 A  young Afro-Iraqi boy living in the Dhi Qar Province Orphanage, holding a stuffed animal
given by the U.S. Army.
Photographer: © Mohammed Aliwi
Today an estimated 1.5 to 2 million African descendants live in Iraq, mostly in and around Basra where they represent 15 to 20 percent of the population.

Africans in southern Iran appear sporadically in the historical record until the 17th century. By that time, the evidence of those serving in military capacities becomes more regular. In 1622, Africans helped the Portuguese during an Anglo-Persian attack at Hormuz. Enslaved Bantu threw firebombs from their ramparts onto English and Persian forces who were trying to gain access to the strategically located fortress on the Gulf Coast. Although the Portuguese lost Hormuz, the record of Africans defending them remains. Africans also defended the interests of the Dutch and British, as well as of indigenous rulers.
People from Ethiopia, Nubia (Northern Sudan/Southern Egypt) and Somalia; and the East Africans having transited through Zanzibar and other ports of the Swahili Coast were brought to Iran, along with captives from Turkey, Georgia, Armenia and the Caucasus (Russia). Ethiopian and Nubian females were mostly employed as concubines and confidantes in harems and could reach key positions. Females from the Swahili Coast often performed domestic work. 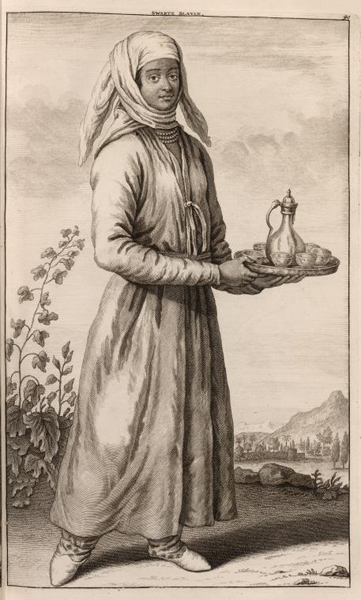 Enslaved Black Woman in Iran, 1714 (Cornelis de Bruyn, Cornelis de Bruins
Reizen over Moskovie, door Persie en Indie (Amsterdam: R. en G. Wetstein, 1714).
Slavic and Baltic Division, Stephen A. Schwarzman Building, The New York Public Library.)
People from Eastern Africa were brought to Khuzistan in southwestern Iran to work in sugarcane plantations. African males were sometimes employed in households as nurses; and some commanded a certain degree of respect for teaching a range of subjects, including science and good manners, to the children of nobility. Females were employed as wet nurses and nannies. Many also served as concubines; under Islamic law their own children, called khanazad (house-born), became members of the slaveholder's family.

Africans also served as minstrels, stone breakers, woodcutters and bodyguards, and worked in royal courts. Shah Sultan Husayn, on visiting the markets at Isfahan, purportedly brought some 200 eunuchs as part of his retinue, half of whom were black. Some Africans rose to positions of authority during the early 18th century. In 1717 an African named Ya'qub Sultan became the governor of  Bandar Abbas, the principal port serving central and southern Iran. 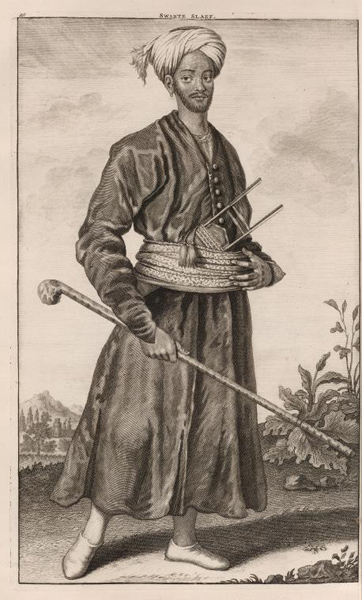 Enslaved Black Man in Iran, 1714
Countless African boys were castrated as they were sold into slavery; only a minority survived the operation (most bleeding to death or dying from complications). Those who became ghulams—soldiers and bodyguards of princes—were a select group, and some gained close access to the highest levels of Persian society. In 1821, the African Ali Akbar Khan served as the commander of the ghulams at the court of the Shiraz prince. As in other parts of the Middle East, eunuchs were particularly valued as harem guards.

Although Africans were brought to Iran over the course of several centuries, as elsewhere in the western part of the Indian Ocean world, the number increased during the 19th century as the trade in Georgians and Circassians became limited in 1828 due to the Russian military victory in northern Iran and the treaty that followed. A sharp rise ensued in the enslavement of fellow Persians—in particular, Baluchis and Khorasanis—and a renewed demand for Africans.

Lingah, Bushehr, Bandar 'Abbas and Qeshm Island became the major slave trading ports for Africans during this period. In 1842, more than 1,200 Africans disembarked, in addition to hundreds of men and women bought and brought by Iranian pilgrims on their return from Mecca and Karbala (a holy site for Shia Muslims). Along the coast, Hormuz had a sizable African population, coming mainly from Madagascar. 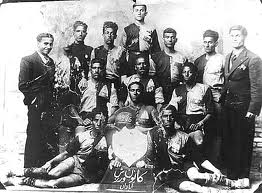 Afro-Iranian  Soccer team from Abadan, Iran, 1936 (http://www.bookerrising.net/2009/06/teachable-moment-blacks-in-iran.html)
Resistance to slavery among Afro-Iranians, largely in the form of flight, rose as abolitionists began to apply pressure from within and from outside Iran. Instances of marronage grew in the early 20th century; and it was not until that time that the Gunabadi, a group of the Ni'matullahi Sufi order, called for emancipation by issuing a fatwa. 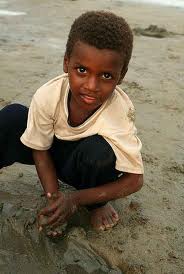 After slavery was abolished in 1928, Africans and their descendants formed their own distinct communities, where they continue to celebrate and commemorate their heritage through music, dance, and passing along their oral history. The settlements of the descendants of the people who mostly arrived in the 19th century may be seen along the Gulf Coast today. They include Zanjiabad and Deh-Zanjian in Baluchistan and Kerman Province, as well as a black community near Bandar 'Abbas comprising Africans who worked as either sailors or agricultural workers on date plantations. 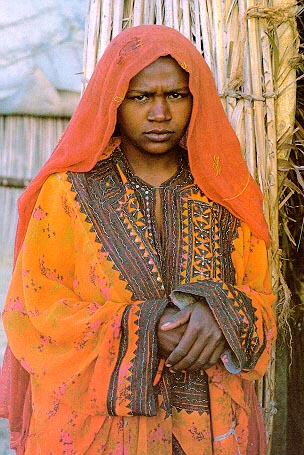 An Afro-Iranian woman
{Some relate Africans of Iran to the Thonga-Bantu cultures of southeastern Africa and it is said that these blacks were brought to the Persian Gulf by Portuguese slave traders as early as the sixteenth century, they are called Ahl-i Hava (Followers of the winds), they worship the Winds and drink the fresh blood because they believe that the drinking of fresh blood will bring down the Wind! However they are very poor people and may look uncivilized but native Iranians of southern Iran have been greatly influenced by African culture of these peoples, for example popular music of Bandari which is considered to be an Iranian or Arabic music, is in fact an African music. (a sample of Bandari Music)-note the fallacy being told about blacks courtesy-http://www.allempires.com/forum/forum_posts.asp?TID=1753}

As in Oman, Dubai and Kuwait, Africans and their descendants in Iran practiced spirit possession (zar). Additionally, they had ceremonies, such as liwat, gowa and al-nuban, serving specific purposes—almost always having to do with driving out or appeasing spirits, usually African, that traveled with the wind. In southern Iran, spirits in general are referred to as pepe (from pepo in Swahili); some are called mature (from matari in Swahili); yet others denote African origins further inland, such as chinyase (from Cinyase, the language spoken by the Nyasa in southern Malawi). 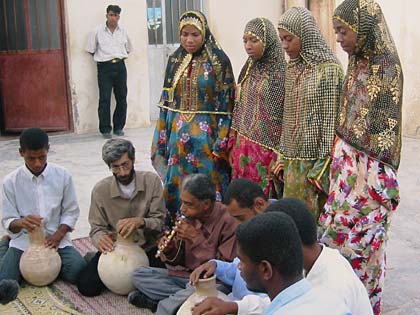 Street scene in Bandar Abbas. Note that the women aren't dressed in blah black outfits, like non-black Iranian women tend to wear, but in rich colors and prints 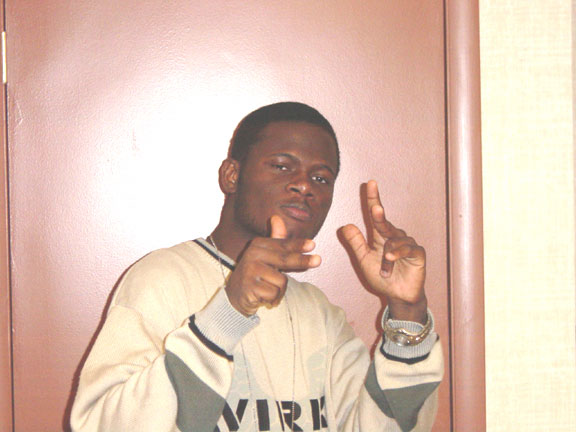 Afro-Iran guy in swagga pose
One prominent Afro-Iranian is Ibrahim ibn al-Mahdi, Caliph of Baghdad and son of an Afro-Iranian mother.
In 2007, a documentary was done about Afro-Iranians.(click on it to watch)