KING SUNDIATA KEITA: THE LION KING AND THE "HEROIC FOUNDER" OF MALI

King Sundiata Keita ( (circa. 1217–c. 1260) also known as  Sunjata Keyita, Mari Djata the first or just Sundiata. Djata means Lion in Mandinka so he is often referred to as the Lion King. He was a weak.
sickly and a crippled boy who rose to greatness. He created the Empire of Mali, which lasted about 300 years. 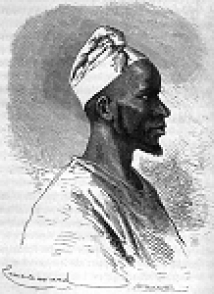 Artistic impression of the "heroic founder" of the Kingdom of Mali,Sundiata (painting is courtesy Miss Fofana:http://mandinkaoftheweek.wordpress.com/2010/04/18/sundiata-keita/)


"By unifying the military force of 12 states, Sundiata becomes an emperor known as the Lion King of Mali, who controls tribes from the Niger River west to the Atlantic Ocean. Walt Disney Studios reprised the story of Sunditata in 1994 as an animated film, The Lion King, with animals substituting for the humans of Mali legend."
Ellen Snodgrass,

Sundiata Keita was born  around 1217 in Niani, Mali close to the boarder of Guinea. The story of his life is mostly known through oral tradition, passed on by generations of Mandinka griots (historical story tellers).  Sundiata Keita spent the largest part of his life building a strong army to overthrow the King of the Ghana Empire, Sumaoro Kante. 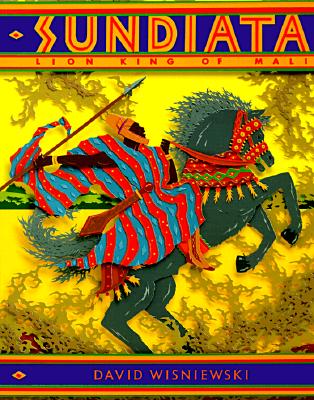 Sundiata, "the lion of Mali" and a great hero in Mali's folklore and oral tradition

Sundiata was a big disappointment to his father. Unable to believe that this backward child could become a great ruler. Despite his disappointment Nare Fa Maghan  made it clear that he wanted the prophecy to be respected, but after his death Sundiatas older brother Dankaran took the throne around 1224.  Legend has it that after Nare Fa Maghan’s death, Sogolon ordered her seven-year-old son to walk. To everyone’s surprise, Sundiata did so, although with great difficulty. He also spoke for the first time, saying, “I will walk now.” One version of this event tells how he used an iron rod to pull himself up. In the process, he bent the rod. This display of strength was impressive but also worrisome.  Dankaran Touman’s mother began to fear that Sundiata might be a threat to her son’s kingship. Sundiata’s mother feared that her son—now viewed as a possible rival to Dankaran Touman—might be in danger. Sundiata was exiled out of the Kingdom together with his mother and two sisters. Their wanderings eventually led them to the city of Mema, where they stayed for three years. Mema’s ruler, Mussa Tunkara, had no children and treated Sundiata like a son. He taught Sundiata the arts of warfare. Sundiata became a mighty warrior, winning battles for Mema. In the meantime, a king named Sumanguru was trying to rebuild the empire of Ghana. He had conquered many kingdoms, including Manding, where Sundiata was born.

When Sundiata learned of Sumanguru’s conquest, he began raising an army to reclaim his homeland. At the same time the people realized that Dankaran could not protect them against their enemies, the oppressed Mandinka people turned to Sundiata for help. 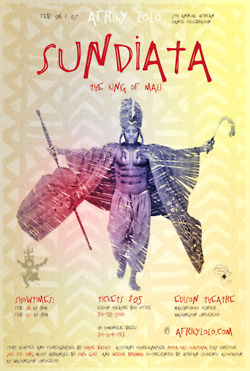 In 1235, Sundiata and Sumanguru met in battle at Kirina. According to legend, both were sorcerers and had magical powers. Sundiata is said to have terrified Sumanguru’s troops by roaring like a lion. Sumanguru is regarded as one of the true champions of the Traditional African religion and was the inventor of the balafon and the dan (a four-string guitar used by the hunters and griots). His power was strengthened by eight spirits, who appeared above his head. Nevertheless, Sundiata’s magic was stronger. He hit Sumanguru with an arrow that he had specially prepared. The arrow had the desired result of taking away Sumanguru’s power. Although the arrow did not kill him, it caused Sumanguru to flee.
Sundiata pursued him and his retreating troops. When he reached Sumanguru’s kingdom of Sosso, Sundiata destroyed it by fire.Creating an Empire Following his victory at Kirina, Sundiata created the Empire of Mali.

He invited twelve kings of lands in the African savannah to the Gbara, or Great Assembly. There he “divided the world” with his allies. He created a constitution and outlined the Empire’s organization. Each king would
remain ruler of his own lands, but all would be united within the Empire. Sundiata became Mansa, meaning “king of kings” or “emperor.”Sundiata established the Empire’s capital at Niani, a city located on the upper Niger River. He set about improving agriculture. Soldiers cleared land for the planting of cotton, grain,
and other food crops. Agriculture became productive. Sundiata understood the importance of
trade. He established Mali’s trading center at Niani. Situated on the upper Niger, it was
ideally suited for trade. Mali was rich in gold and copper—items that formed the basis of its
trade. Merchants and traders from as far away as France and England purchased Malian gold.
Sundiata laid the groundwork for a thriving empire. Although he died around 1260, the Empire of Mali lasted for more than 300 years. 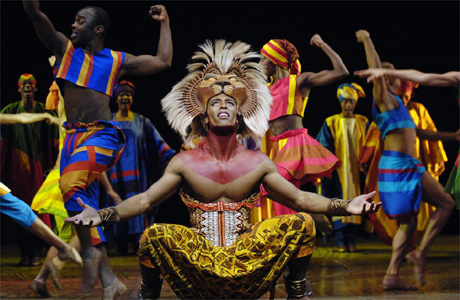 Drama on king Sundiata at a theatre
For elaborate read follow this link:http://clio.missouristate.edu/jabidogun/niane1965.pdf

The epic of king Sundiata Keita of Mali was the inspiration for the Disney film the lion king. However the film itself just scratched the surface of the richness in culture, heritage and history of the actual story. see the story below:

Was "The Lion King" story based on the Mali legend of Sundiata? 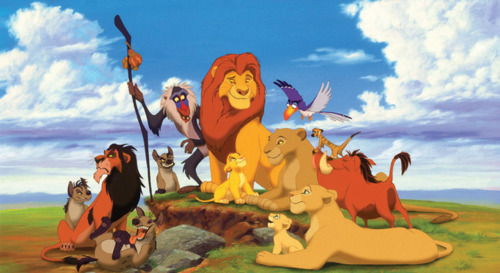 "I expect better from the Daily Planet," says an upset commenter on my review of the stage adaptation of Disney's The Lion King. "The Lion King story was stolen from the Mali people. It's loosely based on its founder Sundiata Keita. This account is a well-known oral tradition. And all these European influences/renditions is nothing but an attempt to capitalize on it without giving the people its proper credit."
As evidence to support this claim, the anonymous commenter cites a 1994 paper presented at an annnual meeting of the National Council of Teachers of English. Though the paper describes parallels betweenThe Lion King and the epic of Sundiata—a traditional tale of Mali—the paper presents no evidence that the filmmakers, who have acknowledged debts to Shakespeare'sHamlet and the Biblical tales of Joseph and Moses, were familiar with the story. I responded to the commenter:
"Stories of jealousy and conflict over royal succession are common across a number of cultures, and while I defer to more knowledgeable sources as to whether The Lion King is a fitting tribute to or a reductive distortion of African cultural traditions, I don't see evidence to support your claim that the story was 'stolen from the Mali people.'"
The commenter responded defensively, citing the authority of the paper's academic source—which is irrelevant, since I was never questioning the paper's accuracy. "Maybe they're not using the words stolen," says the commenter, "but the historical story of Sundiata is never given its proper credit."
"Again," I responded, "where is the evidence that the filmmakers knew the story of Sundiata? For them to have stolen the story, they would have to have known it in the first place."
At this point I went off to do my own research on the Internet, and found several blog posts and study guides repeating the claim that "the Disney movie, The Lion King was based in part on the legend of Sundiata." That quote comes from a Kennedy Center study guide, but like the other posts, it cites no evidence to support the claim. I also found several references to the paper cited by the Daily Planet commenter, describing the paper—accurately—as one that notes parallels, not one that provides evidence that the Disney team were familiar with the Mali legend.
It may well be that they were, and that they felt no more need to credit the African legend than they did to credit Shakespeare or the Bible. But now you've piqued my curiousity, Internet, and I'd like to get the story straight. Can anyone cite proof, beyond the circumstantial evidence I've seen thus far, that the makers of The Lion King were familiar with the legend of Sundiata? 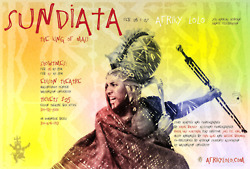 King Sundiata
watch :http://www.encyclopedia.com/video/2_HxS6lGFd0-sundiata-keita.aspx
Note: The link http://eric.ed.gov/PDFS/ED386732.pdf to "Title: The True Lion King of Africa: The Epic History of Sundiata, King of Old Mali,' has been removed so please email ERICRequests@ed.gov
see: Sundiata Keita of Mali, The real lion king
The epic of king Sundiata Keita of Mali was the inspiration for the Disney film the lion king. However the film itself just scratched the surface of the richness in culture, heritage and history of the actual story. The lion king
‘David Winiewski’s 1992 picture book version of the African epic “Sundiata, Lion king of Mali” and the actual historical account of the 13th century lion king, Sundiata, are both badly served by Disney’s “The lion king”. Disney has been praised for using African animals as story characters; for using the African landscape as a story setting; for using African artwork as design motifs: and for using African- american actors as the voices for the film characters. If the film succeeds in having African culture accepted by people usually resistant to recognizing any other culture but their own, then it deserves to be noted for this small breach in the racial divide. Nevertheless, in the larger sense, the film diminishes the culturally rich heritage of history and story from which it derives. Sundiata was the 12th son of the king of Mali, and he was viewed by the kings “griot” as destined for greatness. He grew to manhood in exile, but he returned to fight the evil forces of his brother and return the kingdom to it’s rightful sovereignty. The film converts the real heroes private pain and struggle against truly wrenching physical and political disabilities into a screen situation of sentimental, tearjerker shallowness. An interdisciplinary approach would allow English and social studies teachers to present the epic from a historical and literary perspective.’ (Paterno 1994)
This story belongs to be amongst epics such as Gilgamesh from Mesopotamia, ancient Greek the Iliad, Aeneid of Italy and the wonderful story of Beowulf from Anglo-Saxon literature.
This is a story of a True king who founded the west African kingdom of Mali an empire whose marvels left a bright heritage of culture, riches enlightenment and ancient wisdom. In fact one of the pearls of this empire Timbuktu, many times over ignited the imagination of western explorers and ironically this same splendor prompted European exploration of the west coast of Africa.
The most notable things from this empire Sundiata, Mansa Musa, Timbuktu, Gold, Islam, Ancient manuscripts, International trade and Commerce.
references :
Paterno, Domenica R.The True Lion King of Africa: The Epic History of Sundiata, King of Old Mali.Education Resources information Center.1994
http://812studio.com/i-love-these-posters/

An exciting and colorful full-length account of Sundiata's life in English is D. T. Niane, Sundiata: An Epic of Old Mali (1965). Otherwise, there is almost no literature dealing mainly with Sundiata. Several general works that touch on him and his times are A. Adu Boahen, Topics in West African History (1966), and Basil Davidson, A History of West Africa to the Nineteenth Century (rev. ed. 1967; 1965 edition entitled The Growth of African Civilisation). 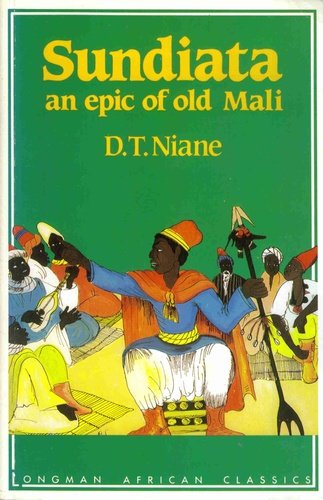