MME ABOMAH "THE AFRICAN GIANTESS," : THE TALLEST LADY IN THE WORLD

Ella Williams who prefers to be call by her showbiz name Mme Abomah was once the world`s tallest hot and beautiful lady in the late 1800`s and early 1900`s. She was reputed to be 7ft 6inch giantess. Though she was born in South Carolina in USA, her show managers claims she was born In Dahomey (now Republic of Benin). 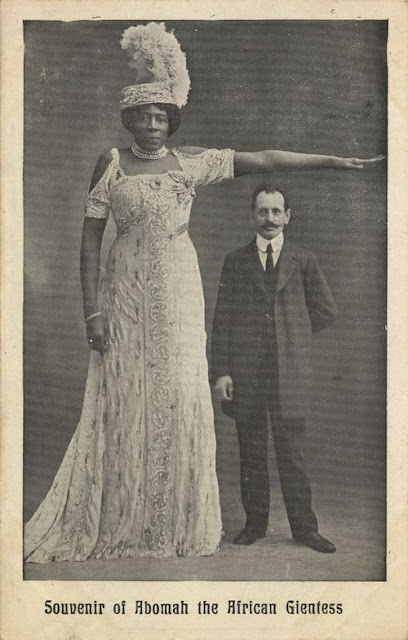 In her own words Mme Abomah says "I was born near Cross Hill in Laurens county. None of my sisters or brothers are unusually large.  For years every time a show man saw me he would want  me to sign a contract, but I never could make up my mind to leave Columbia. Finally in the fall of 1896 while I was cooking for a prominent family in Columbia, Manager F.C. Bostock got me to sign up for a tour."  - 1915

Born in South Carolina in Oct. of 1865, Ella Grigsby narrowly missed being born a slave as the 13th Amendment to the U.S Constitution was ratified only 10 months previous.  Ella came to work for Elihu and Harriet Williams when as a teenager.  Perhaps because Grigsby was the family name of her parent's slave holders Ella took the Williams surname as her own.  The "tour" that Frank Bostock signed Ella up for was a tour of the British Isles.  Bostock understood that Ella's act would not go over well in her native country because at that time another Ella - Ella Ewing - a white giantess from Missouri was touring.  Racism in Europe was not as pronounced as in the States so Miss Williams was ultimately to find greater success on foreign soil. 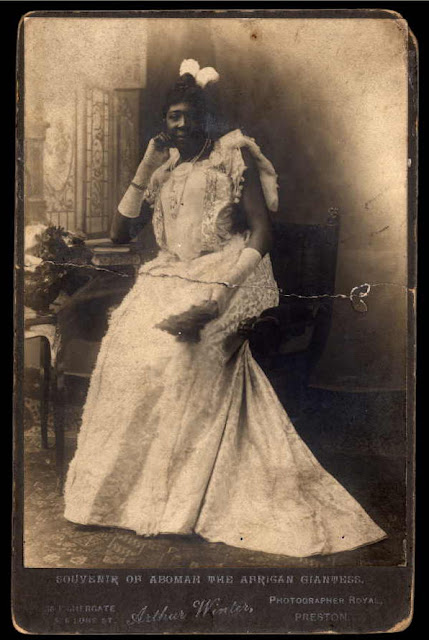 Like so many performers of her time  Abomah's manager mixed a little fact with fiction in promoting his ward.

Her stage name came from Abomey, the capital of the Kingdom of Dahomey (now Benin).  Abomah was initially promoted as being one of the legendary Dahomey Amazons, which was a real, all female fighting force that existed right up to the time the giantess began touring. "One of King Dahomey's Amazons who has been brought over to England for show purposes is a giantess indeed.  Her height is eight feet, and she is both broad and muscular."
----  American press, June 1900
Below is a vivid fact mixed with fiction story on Lady Abomah:

An African Giantess
Abomah, a superb specimen of the African negress, who enjoys the distinction of being the tallest woman living, is black as ebony, and endowed with great physical strength, combined with a symmetrically molded figure, is now on her way to Liverpool. She was formerly one of the attendants and body guard of the barbaric King of Dahomey, whose Amazonian warriors have been famous alike for their prowess and cruelty. Trained for her bloodthirsty calling from early childhood, she was inured to hardship and pain.  Her stature increasing out of proportion to her years, she became a particular favorite of the monarch, and led his army.  This extraordinary woman stands over eight feet in height, and can easily support the weight of a man on her outstretched hand.  The dusky beauty, having recently evinced a strong desire to travel, and particularly to visit England, will no doubt soon pay a visit to some of our principal cities.
-  London Tit-Bits ( 7 Sept 1900) 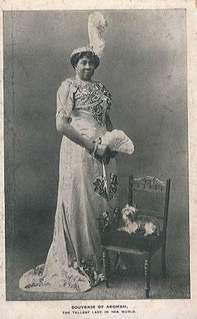 However, Abomah`s history appeared in Newspapers of the time and below are two-paged story specimen: 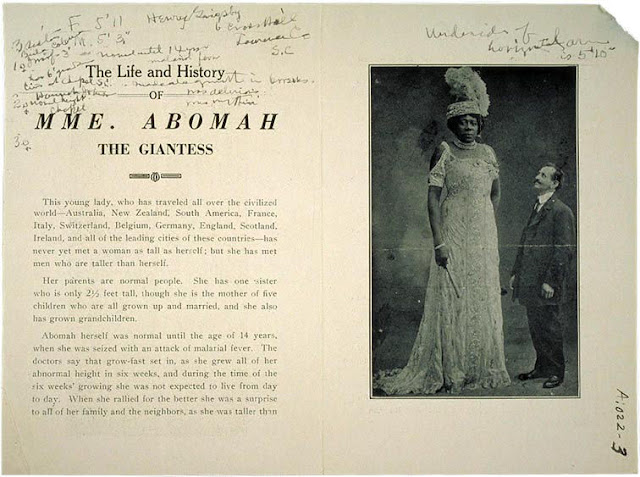 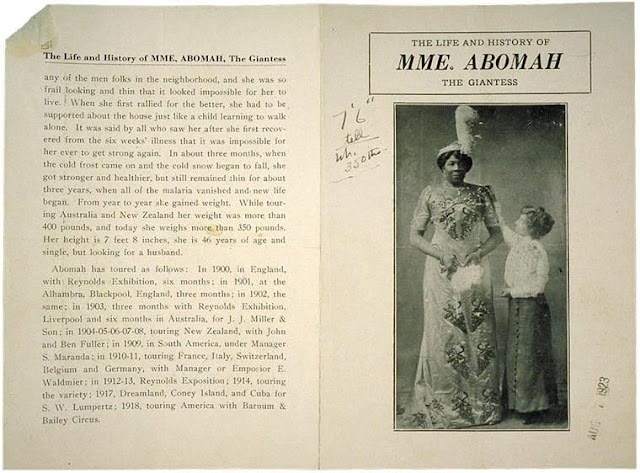 According to her bio pamphlet which she sold at her shows Abomah appeared in 1900 in Liverpool with Reynold's Waxworks and Exhibition; 1901 & '02 at the Alhambra, Blackpool; 1903 with Reynold's and later touring Australia; seasons 1904 - 08, touring New Zealand; 1909, South American tour; 1910- 11, European tour; 1912- 13, Reynold's Waxworks; 1914, touring English variety halls; 1917 Dreamland at Coney Island and Cuba; 1918 with Barnum and Bailey
(author's research) In 1920 she was at Dreamland and the World's Museum and in 1921again at the World's Museum in Philadelphia when it was announced that she was going to sail for Paris for a three months engagement.
She was back at Coney Island in 1923 and the following year appeared at Pete Kortes World's Museum in Los Angeles.  She was last seen with Ringling Bros. Barnum & Bailey in 1925. 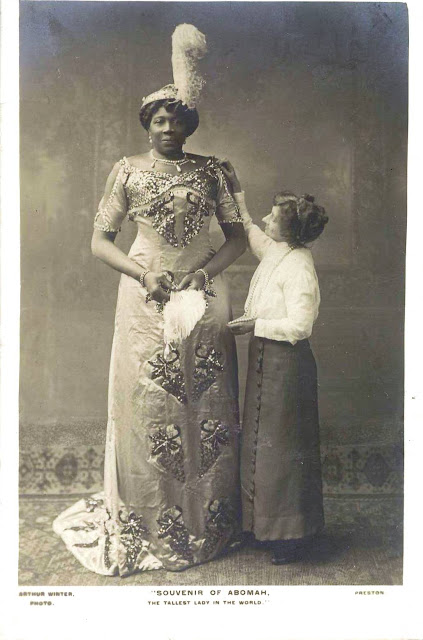 "Mme. Aboma, the giantess, was taken in to dinner (at Stauch's, orgainized by the Dreamland Social Club) by the Baron Paucci, the smallest man alive.  The baron was every inch - every 30 inches of him - the noble man as he escorted the demure Aboma, eight feet of petite, mulatto, femininity, to the table." - Aug 1923 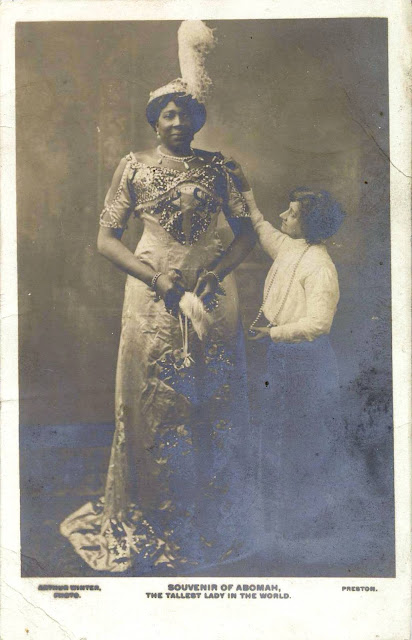 In New Zealand, Abomah had very expensive and extensive wardrobe.Having an attendant invoked a sense of royalty.  One New Zealand paper reported that "On Saturday evening, at the Alhambra Theatre, Abomah, the Amazon giantess, made her first appearance before a Dunedin audience after a general tour of Otago and Southland.  She stands 7ft 6in in height, is a full-blooded negress, and was born in America.  She is well-proportioned, and, needless to say, she completely dwarfs any average man or woman, and the expectations of the audience were more than realised, for the "tallest lady" was everything that had been announced about her, and she duly defied anyone in the audience to try conclusions with her in stretch of hand.   Abomah, in addition to posing, contributed some songs, chief of which was "My Honolulu Bell," and she rendered this item in a pleasing voice and with good effect.
- Otago [NZ] Witness, 1904 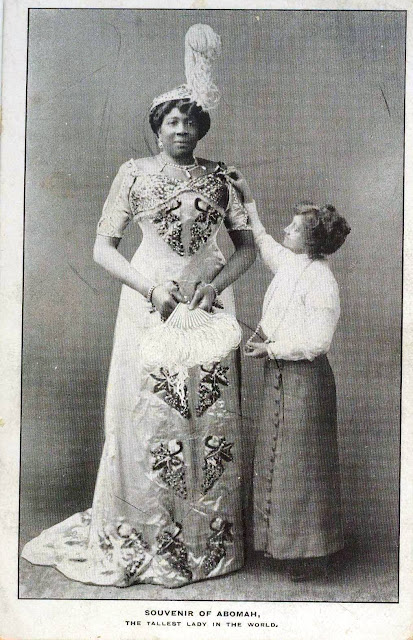 Back in New Zealand one newpsaper`s reportage revealed that Abomah  at one time managed her own small touring company. " The Abomah Company of Entertainers will shortly open in Wanganui.  Concerning the Company the Hawke's Bay Herald says: - A very large audience asembled in the Theatre Royal last night for the purpose of seeing Abomah, the giantess.  In addition to the privilege of seeing the "tallest woman on earth" those present were also treated to a capital night's entertainment.  The giantess, Abomah, was introduced by a gentleman of moderate build, who looked like a pigmy by her side.  The lady stands 7ft 6in high, and weighs 18st., but notwithstanding her somewhat stupendous proportions, is free from any awkwardness in movement or gesture.  She bears the greatness that has been thrust upon her gracefully and modestly and comports herself as if quite unconscious that she is not as other women.  Abomah sang "The Honolulu Belle," and was encored, and at the close of the entertaiment gave "All coons look alike to me" with equal success.
New Zealand cutting, 1905 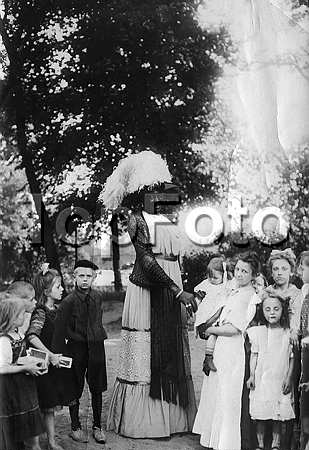 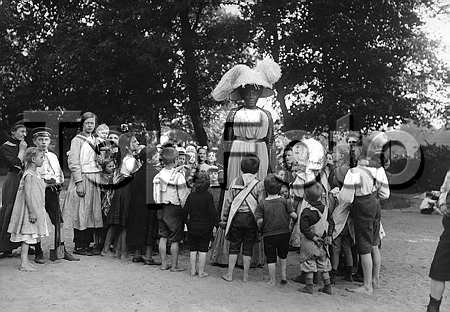 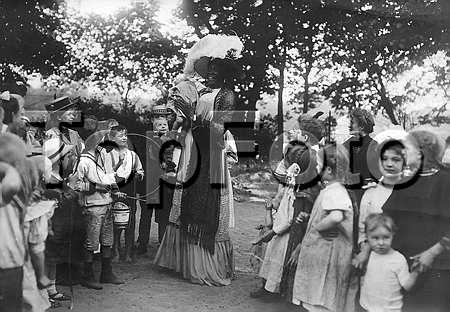 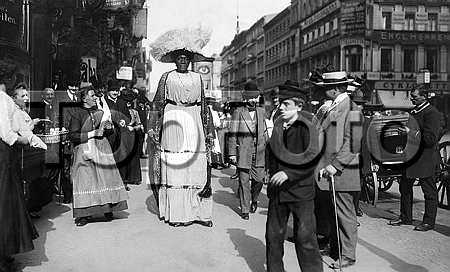 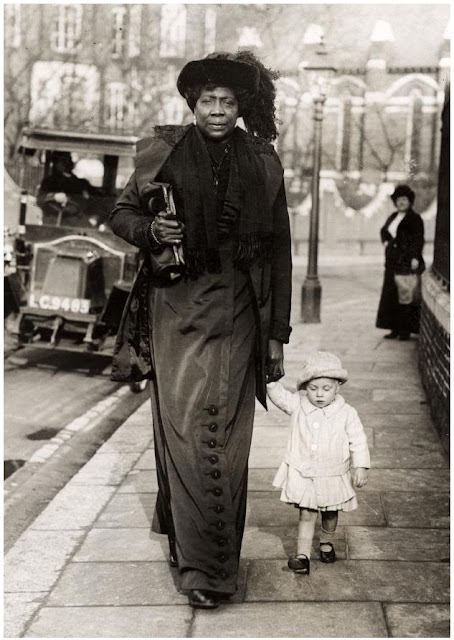 Nanny during the day, giantess in the 'Music Hall', London, at night. Abomah in 1914. 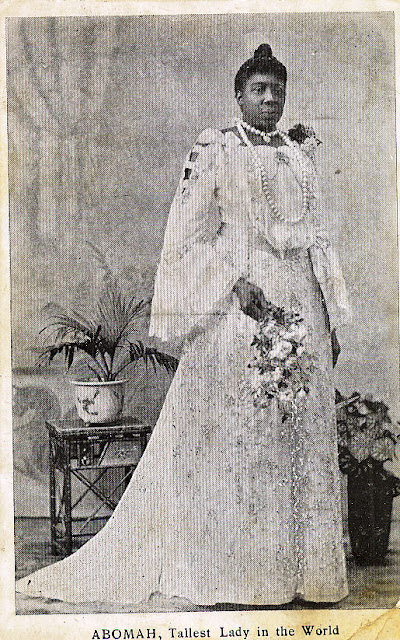 Britain declared war on Germany Aug 1914. Ella cancelled her tours and returned to the States in March of 1915 narrowly avoiding the attacks on London by German Zeppelins in April.

MOST PHOTOS OF ABOMAH were taken when she was in her 40's.  These photos, taken in 1925, show her toward the end of her career, age 60.  The above with a Coney Island sideshow and on the left (photo detail) Ringling Bros. Barnum & Bailey Congress of Freaks.
The plume of her hat that used to stand so tall now lays down as if tired. 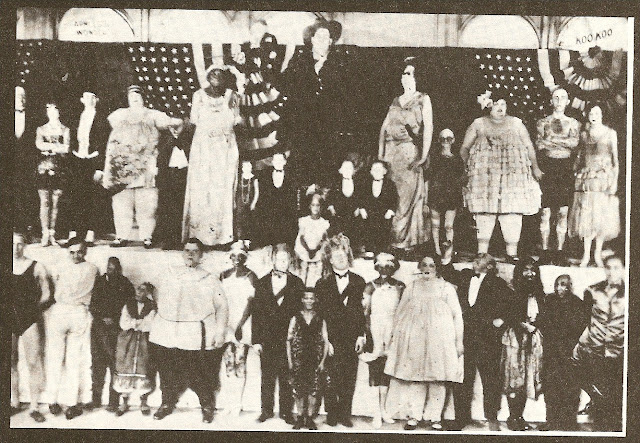 Abomah is standing next to a "living skeleton" who was billed as  "Transparent Williams".   At first I thought the two had their arms around each other as a couple - that maybe the "dusky lady" found companionship in her declining years with another performer.  But upon closer examination it can be seen that the thin man is holding his cane with his right hand and that perhaps Abomah rests her left hand on his shoulder for support.  The former "Dahomey Giantess" is now an elderly lady trying to eke out a living as best she can.  Another (younger) giantess appeared with the RBB&B show that year - Eleanor "Londy" Wagner from Germany. 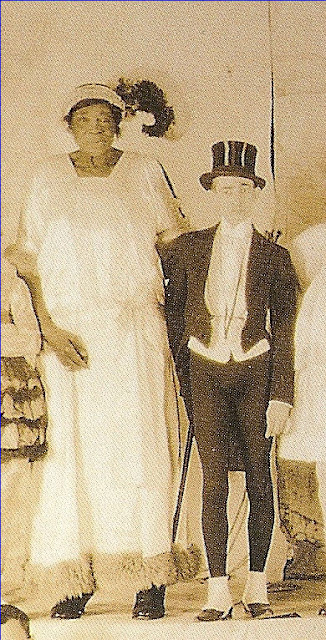 Abomah  passed away a destitute, forsaken and forgotten. But now we ought to celebrate her as one of the best black women that ever lived. 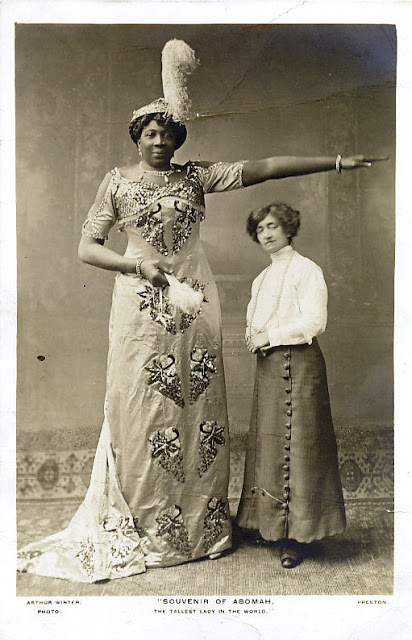 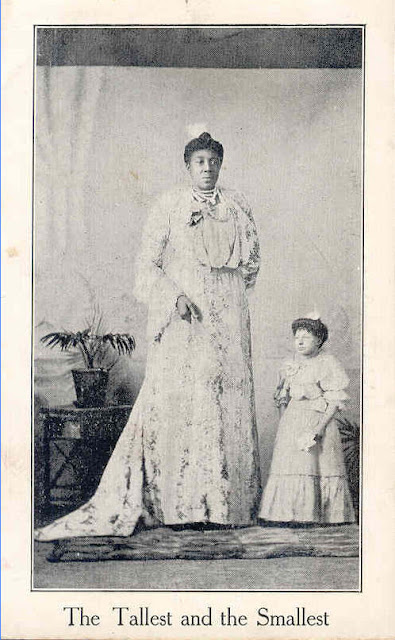 Possibly taken Australia, 1907 with Mrs. General Mite. The two were
known to have paired together that year for exhibiton purposes. 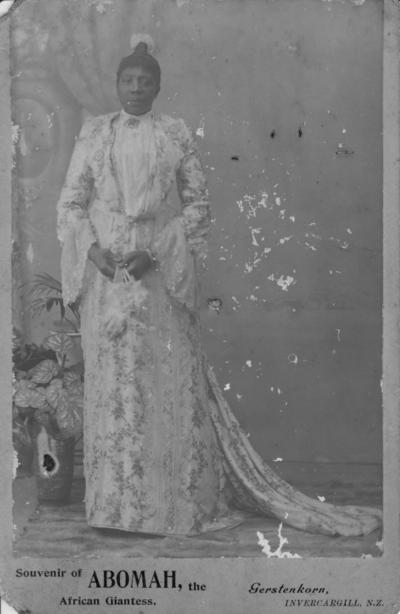