The extraordinary life story of Sarah Forbes Bonetta is the stuff of romance novels. Born an African Egbado princess around 1843, she was captured as a small child by rival Dahomans, who had killed her parents, and taken to Dahomey to be killed eventually in a ritual sacrifice.   A British naval officer, Frederick Forbes, commander of HMS Bonetta, on a mission in the autumn of 1849 to negotiate an end the slave trade among the Dahomans, interceded for the child with King Gezo, demanding her as a gift for Queen Victoria.   Commander Forbes had the child baptized Sarah Forbes Bonetta, and sailed with her to England, where she was   presented to Queen Victoria and thereafter raised under the Queen's protection in England and Sierra Leone, then a British dependency. 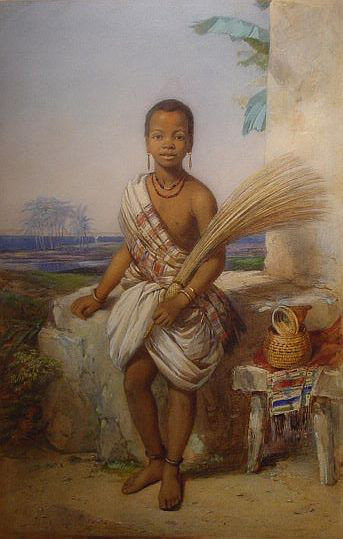 Sarah Forbes Bonetta as a child by British watercolorist Octavious
Oakley (1800-1867)
The story of the charming and highly intelligent little princess was covered widely by the newspapers of the day. One report, under the title Presentation of a Dahomean Princess to the Queen , describes her visit to Windsor Castle on November 9, 1850:
"Capt. Forbes, of her Majesty's ship Bonetta, lately brought with him to this country a young African Princess, presented to him by the King of Dahomey. Her Majesty, having been informed of the circumstance, graciously signified her intention of taking charge of the child, and, having appointed Saturday last for the presentation of the Princess, Captain Forbes, accompanied by his interesting charge, accordingly attended on that day at Windsor Castle for the purpose, when the young Princess, who is not more than eight years of age, was presented to the Queen and the Prince Consort, in the presence of . . . the Royal Household.   The gallant Captain . . . had been engaged in negotiating ta treaty with the King of Dahomey, having for its object the termination of the export of slaves from that kingdom. This interesting child, considered to be of high rank, had been captured by the King from a neighboring ruler with whom he had been at war, and having been detained as a close prisoner, not having been disposed of (as is the custom of his Dahomean Majesty with captives of inferior rank) to the Portuguese and Brazilian slave dealers. She had been closely confined for nearly two years, when she was presented (as a mark of the highest respect and as an especial favor) to Captain Forbes by the King. After the formal presentation of the little Princess to her Majesty at Windsor, she returned with Captain Forbes to Winkfield Place, where she will remain until the necessary arrangements be made for her future education, under the auspices of her Majesty. Since her arrival in the country, she has made considerable progress in the study of the English language and manifests great musical talent and intelligence of no common order. Her hair is short, black, and curling, strongly indicative of her African birth; while her features are pleasing and handsome, and her manners and conduct most mild and affectionate to all about her." 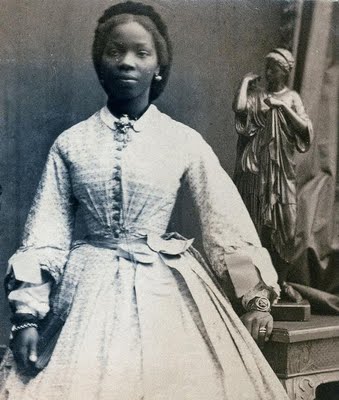 Sarah Forbes Bonetta Davies
She returned to England with Forbes who presented her to Queen Victoria, who in turn gave her over to the Church Missionary Society to be educated. Sarah suffered from fragile health and in 1851 she returned to Africa to attend the Female Institution in Freetown, Sierra Leone. When she was 12 years old, Queen Victoria commanded that Sarah return to England, where she was placed under the charge of Mr and Mrs Schon at Chatham.

Queen Victoria was so impressed by the girl's natural regal manner and her gift for academic studies, literature, art and music that she gave her an allowance for her welfare and Sarah became a regular visitor to Windsor Castle. Sarah's genius became admired throughout the royal court and she continued to outshine her tutors with her advanced abilities in all studies. 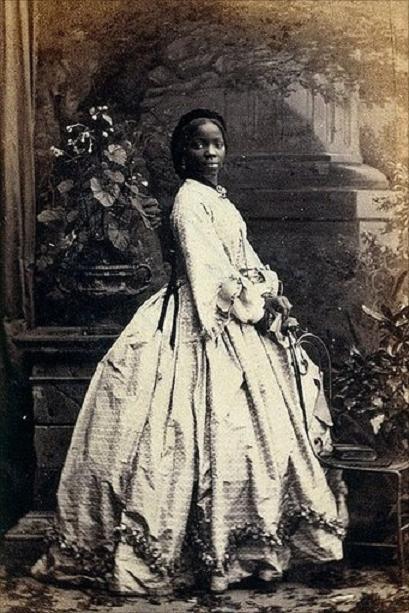 Portrait of Sarah Forbes Bonetta Davies photographed by Camille Silvy
in 1862
At the age of 18, Sarah received a proposal from James Pinson Labulo Davies, a 31 year old Yoruba businessman of considerable wealth who was living in Britain. She initially refused his proposal and it is reported that in order to persuade her to accept Sarah was sent to live with two elderly ladies in Brighton whose house she described as a "desolate little pig sty".

Queen Victoria sanctioned Sarah to be married in St Nicholas Church in Brighton in August 1862. The wedding party, which arrived from West Hill Lodge, Brighton in ten carriages and pairs of grays, was made up of "White ladies with African gentlemen, and African ladies with White gentlemen" There were sixteen bridesmaids. The newlyweds moved back to West Africa and Sarah was baptised at a church in the town of Badagry, a former slave port. They settled in Lagos where her husband became a member of the Legislative Council from 1872-74 (in which year Lagos Colony was for a time amalgamated into the Gold Coast). 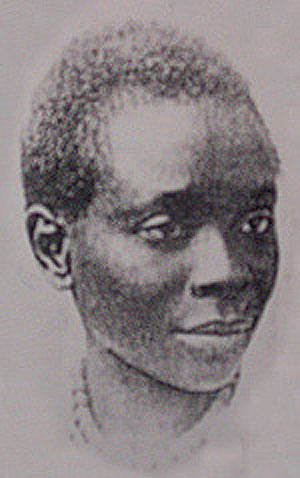 Victoria daughter of Sarah Forbes Davies
Shortly after her marriage, Sarah gave birth to a daughter and was granted permission by the Queen to name the child Victoria - the Queen also became her Godmother. 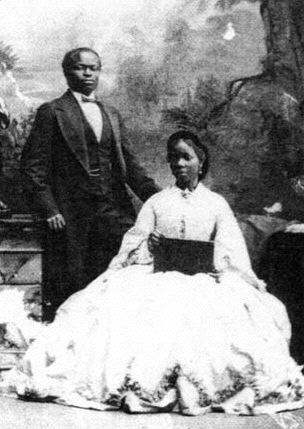 Sarah Forbes Bonetta about the time of her marriage to James Davies, 1862

Sarah visited the Queen in 1867 with her daughter then returned to Lagos and had two more children. Later, upon Sarah's death the Queen wrote in her diary: "Saw poor Victoria Davies, my black godchild, who learnt this morning of the death of her dear mother". So proud was Queen Victoria of Sarah's daughter, that when she passed her music examination, teachers and children had one day holiday. Throughout her life Sarah had a long lasting cough that was caused by the climate change between Africa and Britain. In 1880, suffering from tuberculosis, she went to convalesce in Madeira off of the coast of West Africa. She died, around the age of 40, in 1880 and was buried in Funchal, Madiera.

Her daughter Victoria was given an annuity by the Queen and she continued to visit the royal household throughout her life.

Sarah Bonetta
The most important aspect of  Sarah`s story that is very revealing is where Captain Forbes tells the Queen about the exceptional intelligence of Sarah Bonetta Forbes Davies who prefer to call herself INA.
In his journal Captain Forbes gave an account of his mission with relation to Miss Bonetta:

"I have only to add a few particulars about my extraordinary present The African child". In a former portion of this journal I have mentioned the Okeadon war; one of the captives of this dreadful slave-hunt was this interesting girl.

It is usual to reserve the best born for the high behest of royalty and the immolation on the tombs of the diseased nobility. For one of these ends she had been detained at court for two years: proving, by her not having been sold to slave dealer, that she was of a good family.

So extraordinary a present would have been at least burden, had I not the conviction that, in consideration of the nature of the service I had performed, the government would consider her as the property of the crown.
To refuse, would have been to have signed her death warrant which, probably, would have been carried into execution forthwith. Immediately on arriving...
Of her own history she was only a confused idea. Her parents were decapitated; her brother and sisters she knows not what their fate might have been .
For her age supposed to be eight years. She is a perfect genius; she now speaks English well, and has a great talent for music. She has won the affections, with but few exceptions, of all who have known her, she is far in advance of any white child of her age, in aptness of learning, and strength of mind and affection." 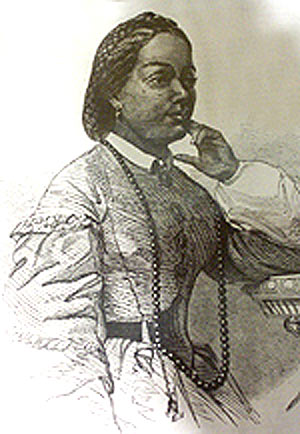 Her photographic  portraits can now be seen at the National Portrait Gallery, London throughout October. 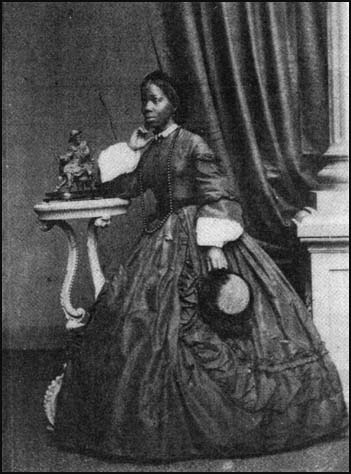 This is Sarah Forbes Bonetta. Her daughter Victoria became the god-daughter of Queen Victoria of England. She was popularly known as the "African Princess". This portrait was taken by the French photographer Camille Silvy (1834-1910) at his London studio in 1862, a month after her marriage to James Labulo Davies, a West African merchant. 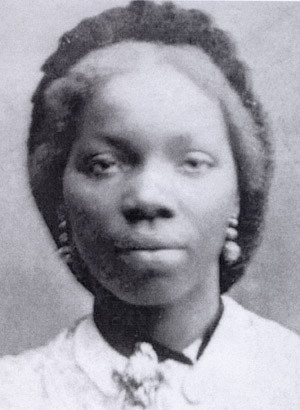 A portrait  of Sarah Forbes Bonetta (aka Sally Bonetta Forbes) popularly known as the "African Princess". A detail of a portrait by the French photographer Camille Silvy (1834-1910) taken at his London studio on 15th September 1862, a month after her marriage in Brighton to James Labulo Davies, a West African merchant. 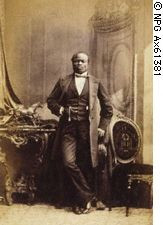 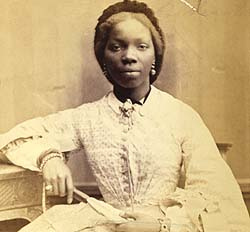 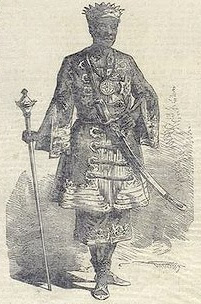 Sarah was the subject of a book by Walter Dean Myers entitled At Her Majesty's Request: An African Princess in Victorian England 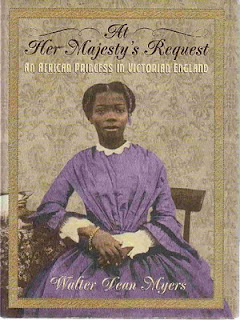