"If You Don`t Fish. You Are Not a Caprivian."` Caprivian Saying.

The Caprivians are the Lozi-speaking people living in east Caprivi region of Namibia, which borders on Angola,Zimbabwe, Zambia and Botswana. The Caprivian population is about 92,000 and this is approximately 3.7% of the Namibian population” (Buys & Nambala 2003). They share a common history and culture with Lozis and Makololo of Barotseland across the border in Zambia.

Caprivian boy jumping into the river

The region is dominated by two tribes, the Mafwe and Vasubia, and in the west on the banks of the Kavango are the Mbukushu usually classified with the Kavango people. In the east are Subia and Fwe tribes and the others including Yeyi, Totela, Mashi, Bushmen (Makwengo), Mbalangwe, and the Lozi community. Outside Namibia the Caprivians are ethnically related to the Lozi (Luyana, or Luyi) and the Kololo (Bafokeng) people in Barotseland, Zambia (Buys & Nambala 2003:). All these tribes make up their ancestral kingdom, known as Barotseland. The Caprivians identify with the rest of Namibia, as Namibians and they are socially inclined.

The water rich landscape is also the ideal place for angling enthusiasts, canoeing and white water rafting. For those interested in more cultural pursuits, the Caprivi people are renowned for their traditional crafts, and many festivals and markets take place throughout the year. Other off-the-beaten track destinations include the Zambezi Waterfront, the town of Katima Mulilo, and the eastern most tip of Namibia, Impalila Island.

Geography
The Caprivi is a tropical area, with high temperatures and much rainfall during the December-to-March rainy season, making it the wettest region of Namibia. The terrain is mostly made up of swamps, floodplains, wetlands and woodland.

In addition to the Zambezi River, the strip also holds the Cuando and Kwando River, which marks the border with Botswana. Tributaries of the river here go by different names, including the Linyata and the Chobe. The province's far eastern is where the Cuando meets the Zambezi.

Language
Most of them speak Lozi Kololo) also known as siLozi and Rozi, is a Bantu language of the Niger–Congo language family within the Sotho languages branch of Zone S (S.30), that is spoken by the Lozi people, primarily in southwestern Zambia and in surrounding countries

A traditional Cultural group from the Caprivi waiting to perform for tourists.

History
The Valozi  which make up the present day Caprivians are the remnants of the Kololo Kingdom,established by Chief Sebetwane of the Bafokeng (originally from the Orange Free State in South Africa), who crossed the Zambezi River in 1838 and over-powered the Luyi. The largest Capri-vian tribal groups are the Masubia andMafwe. Other tribes are the Mayeyi,Matotela, Mashi and Mbukushu.Within communal areas there are different levels of traditional authority.

The Caprivi Strip is a narrow piece of land about 400 kilometres long, in the far North-East of Namibia. During the colonial period, the Caprivi was called “Eastern Caprivi Zipfel” (Pretorius 1971:1). The East Caprivi is bordered by the Kwando Linyanti known as Chobe (Pretorius 1971:1).

The Southern border follows a straight line parallel to the northern border and 30 kilometers south of it from the Kavango to the Linyanti River, from there it follows the main stream of the Linyanti as far as the main stream of the Zambezi River (where Linyanti is also known as the Chobe).
The Zambezi River is a region of swamps and flood plains and the Caprivi Strip was obtained from Great Britain by Germany in 1890 to give German South West Africa (now Namibia) access to the Zambezi River, west of Victoria Falls. Originally part of Botswana was referred to as (Bechuanaland), the Caprivi was ceded by Britain to the Germans in a complicated land exchange deal designed to link German colonies from the west to the east of Africa.

Buys & Nambala (2003:130) say of Caprivi:
“Due to its geographical position on the map of Africa, the history of Caprivi was
always linked directly to the histories of its neighbouring countries, opposite the great
rivers: Kwando, Zambezi, Chobe and Linyanti. Geographically, demographically,
economically and even culturally, Caprivi was always much closer to Zambia,
Zimbabwe and Botswana, than to central Namibia. Extensive literature is available on
the effects of the colonial ‘scramble for Africa’ in the previous century….”

In the 1970s and 1980s, the territory was used as a rear base by the South African army at the height of the apartheid era in its war against the Namibian independence movement, South West Africa People’s Organisation (SWAPO), which is Namibia’s ruling party today. 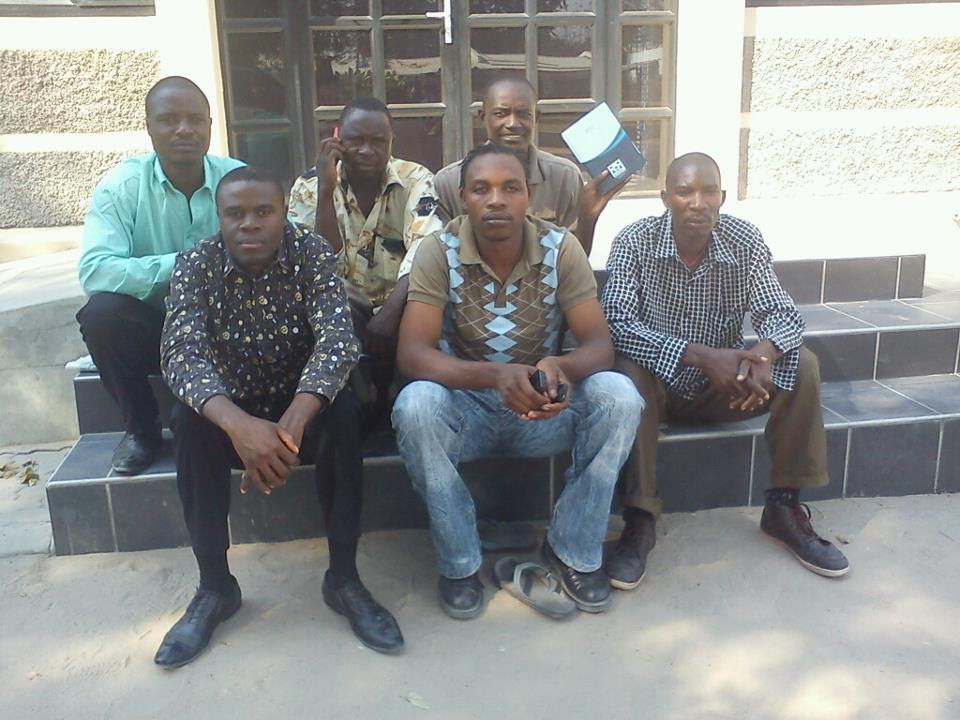 Caprivian Human right activists/freedom fighters. They championing the cause of Caprivian people against Namibian governments discrimination against their minority tribe.

The Caprivi is considered strategically important in Namibia because it is a narrow panhandle extending out from Namibia's northern border and is contiguous with four other countries, namely Botswana in the south, Angola and Zambia in the north and Zimbabwe in the east. It is also important because some of the arid southern African region's most important rivers, including the Zambezi and the Okavango, run along or through it. And as a popular destination for international tourists, the Caprivi brings in hard currency to the national coffers of Namibia.

Flora and fauna in Caprivi
The region is home to 450 animal species, including elephants, making Caprivi a popular game-watching spot.

The wildlife is protected by several national parks, Bwabwata National Park, Mamili National Park, and Mudumu National Park; animals travel freely across the unmarked border with Botswana, where the Chobe National Park lies. The strip is also a prime bird-watching area, with almost 70 percent of bird species found in Namibia being recorded here.

Bwabwata National Park is 6,100 square kilometres (2,400 sq mi) and extends for about 180 km (110 mi) from the Kavango River in the west to the Kwando River in the east. Deciduous woodlands are dominated by trees such as wild seringa, copalwood and Zambezi teak. While the park is sanctuary to 35 large and numerous small game species, visitors are not likely to see many of these animals as vehicles are restricted to the road between Kavango and Eastern Caprivi. Animals likely to be seen are elephant, roan and kudu, buffalo occur towards the west. As many as 339 bird species have been recorded in west Caprivi.

The wild and little visited Mamili National Park is Namibia's equivalent of the Okavango Delta, a watery wonderland of wildlife rich islands, river channels and wetlands. The focal points of the 320 km2 (120 sq mi) national park are Nkasa and Lupala, two large islands in the Kwando/Linyati river. During the dry season the islands can be reached by road but after the rains 80% of the area becomes flooded, cutting them off from the mainland.

Scallow's Turaco (The old Subspecies of Livingstone's Lourie) which are only found in the Katima Area. Very rare if you see it is just in one town, but quite abundant in the town. Shy birds, they mostly hide among thick greenery. This one took a bath and went to sit in clear sun for a bit of warming and drying.

A juvenile Black-headed Heron and Pied Kingfisher sitting close. The Juvenile has a mostly grey head and speckles on the chest, while the adult has a black head and crest.

Mudumu National Park is a vast 1,000 km2 (390 sq mi) expanse of dense savannah and mopane woodland with the Kwando River at its western border. The park is home to small populations of sitatunga and red lechwe while spotted neck otter, hippo and crocodile inhabit the waterways. Animals to be encountered are elephant, buffalo, roan, sable, kudu, impala, oribi, zebra, wild dog as well as some 430 species of birds.

A lechwe in Caprivi 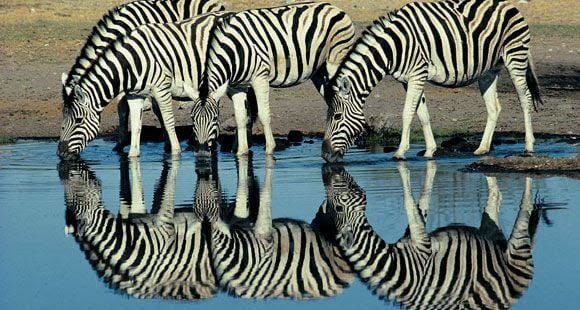 Economy
Most Caprivians are subsistence farmers who make their living on the banks of the Zambezi,  Kwando, Linyanti and Chobe rivers. Land is cultivated under a system of individual right of occupation as allocated by the people’s authorities.Grazing and veld products are used on a communal basis. In addition to fishing and hunting, a significant but not exclusive element of the local economy, they keep cattle and cultivate the land.

When the Zambezi and Chobe rivers come down in flood,more than half of Caprivi east of the Kwando may be under water. During this period Caprivians use their mikolo (dug-out canoes) to traverse the routes normally used by trucks and pedestrians

Socio-poltical structure
In eastern Caprivi each village has a headman, generally the most senior male member. He advises the senior headman, who represents several villages. The senior headmen act as local representatives on the tribal council orkuta , over which then gambela (chief councillor) presides. 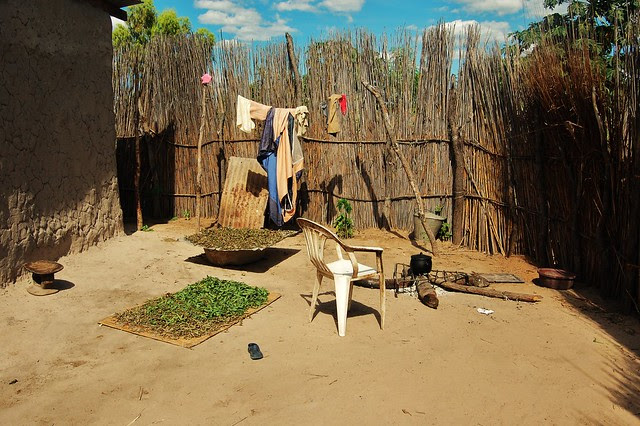 The kuta is the highest legislative, administrative and judicial body in the tribal area. In western Caprivi, traditional authorities are less structured, but are similar in that authorities range from the local village headmen to a chief who is in charge of a large area.In Caprivian society the family is the most important socio-economi cunit. Families usually live in villages.Two systems are distinguishable inthe social organisation. The Masubias are patrilineally oriented, while the Mafwe refect distinct matrilineal features in their rules of succession.The form of government consists of hereditary chieftainships, one for the Masubia and one for the Mafwe.

Dress Code:
Mashamba- worn by both men and women:
these are a form of shirt made of thin bamboo cuttings and rope thread.
Shitenga-rappers worn by women

Religion
Caprivians are traditionally religious people like any other African people. Even though their religious practice is associated with ancestors and nature, they have a comprehensive understanding of God as the Creator of all things. Traditionally, several places in the Caprivi region, such as, under the Baobab trees, in the thick bushes, and some deep spots in the river, are still associated with religion. The Caprivian religio-culture resembles the Israelite cult, on views such as polygamy; abstinence from certain food, and payment of bride price (lobola). Most rituals take place when there is less rain; ancestors are then consulted.

Nyambe is the name of the Supreme Being of Caprivians. He is accorded with a realization of having created all things. Nyambe is therefore superior to all spirits (Jalla 1928:143). Some of his attributes include omniscience and omnipotence as seen from various proverbs and myths (Mainga 1972:95; ikenga-Metuh 1982:17).

Lozi legend has it that in the beginning, Nyambe lived on earth in consort with his wife, Nasilele (Jalla 1928: 144; Turner 1952:49; Mainga 1972:95). The aggressive tendency of man, Kamunu, compelled Nyambe to flee to heaven where he set up his village, Litooma. The myth of this episode recounts how Nyambe ascended to heaven riding on a spider. Upon his arrival, he poked the spider’s eyes and sent it back to earth. The purpose of blinding the spider was to deter man from imitating him as he had done at different occasions.
With the departure of Nyambe to heaven, the sun was recognized as his proxy, while the moon represented Nasilele (Turner 1952:49). At other times, people thought Nyambe lived amongst the stars from where he influenced their lives and death (Arnot 1889:88).

Further, prayers were made at sunrise perhaps, demonstrating associations with sun worship. Those who remember the ancient Nyambe worship, look up to the rising sun each morning for continued provision. With heads bowed to the ground, they clasp their hands in prayer (Jalla 1954:3; Rooke 2006:2). 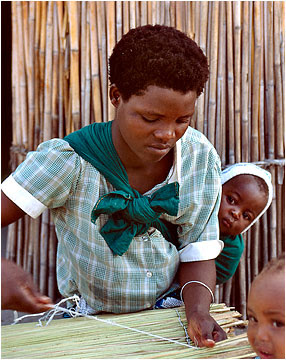 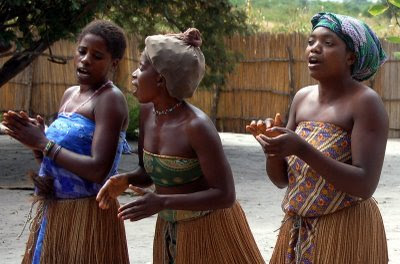 Caprivian kids playing in the river

A male bird doing a dance to attract a female 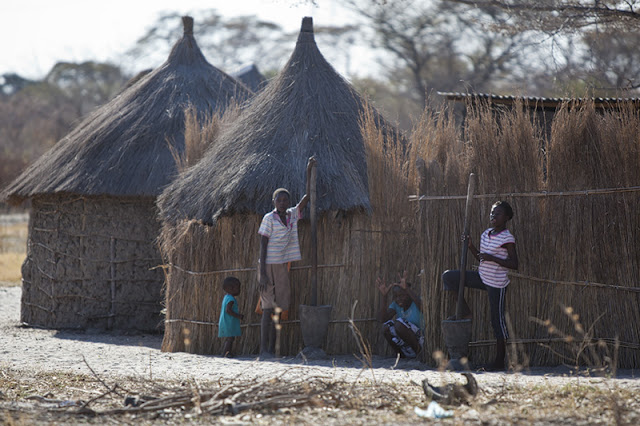 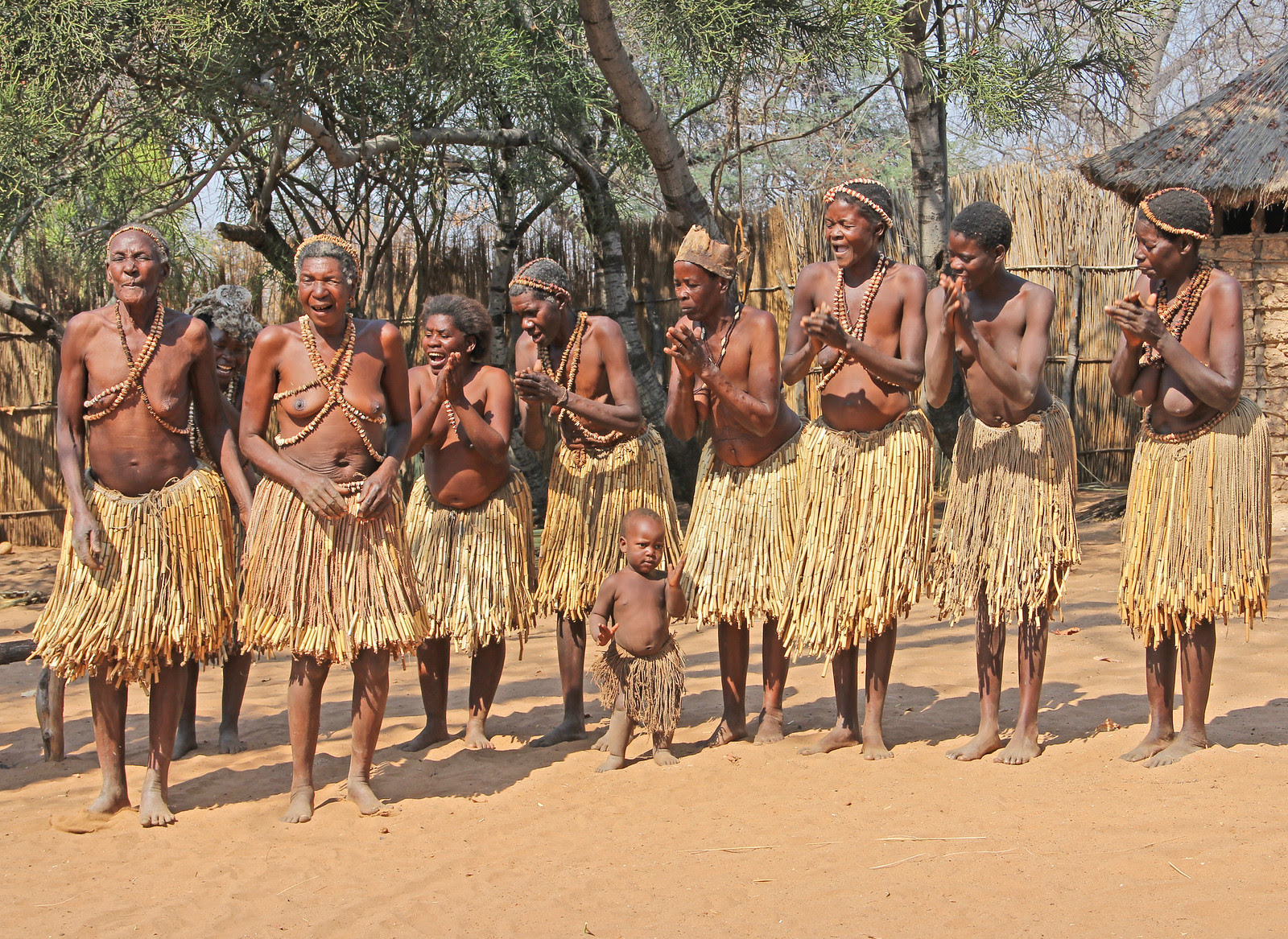 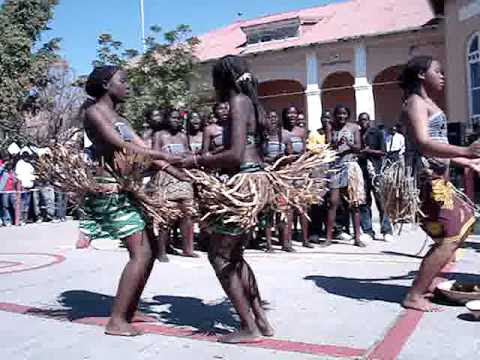 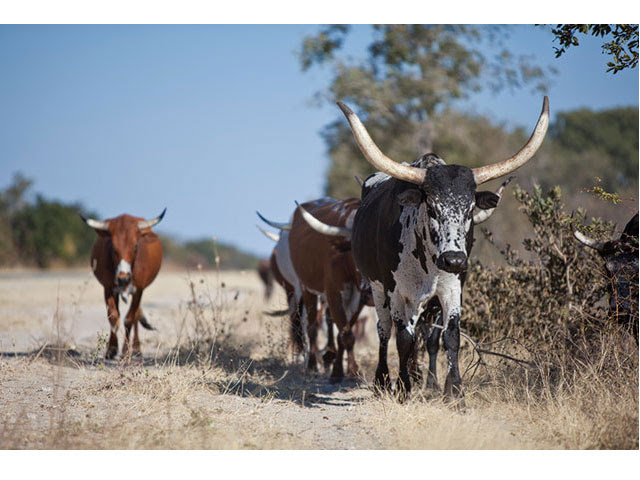 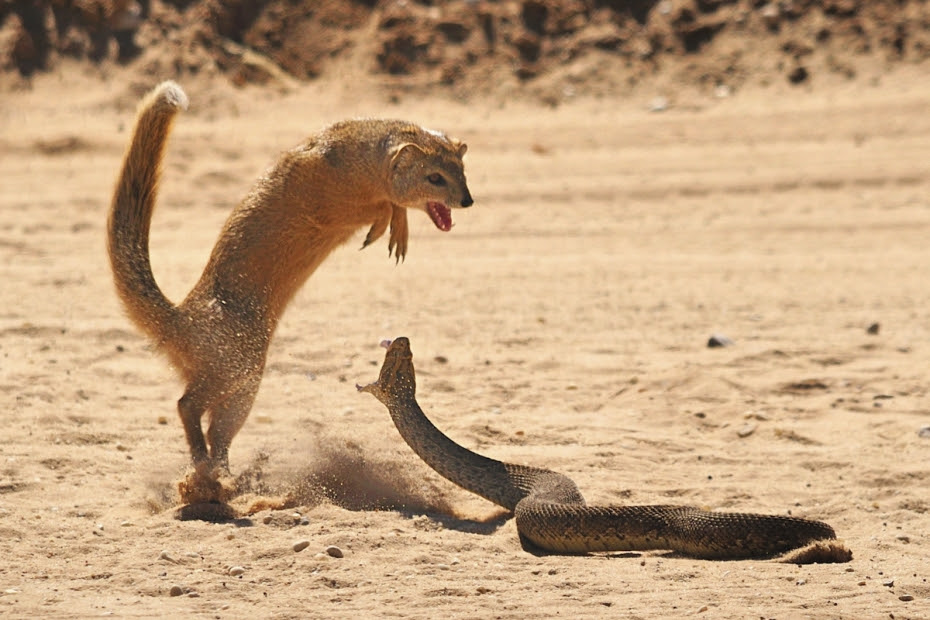 Pretorius, Johan L. 1997. The Fwe of the Eastern Caprivi Zipfel. A Study of their
Historical and Geographical Background, Tribal Structure and Legal Systems, with
Special Reference to Fwe Family Law and Succession. University of Stellenbosch.
(Thesis).