QUOBNA OTTOBAH CUGOANO: THE UNSUNG HERO OF ABOLITION AND THE FIRST AFRICAN TO DEMAND PUBLICLY TOTAL ABOLITION OF SLAVE TRADE.

Before Olaudah Equaino aka Gustavus Vassa, the famous Nigerian Igbo man started to fight for the abolition of slavery, there was a Ghanaian (Gold Coaster) called Quobna Ottobah Cugoano. Cugoano was the first black man (An African) to to lead in the first for the abolition of slavery by demanding publicly the total abolition of the trade and the freeing of the slaves  in Britain after gaining his own freedom as a slave from Granada. He is one of the "Unsung Heroes of Abolition," "one of the Britons most famous 100 Blacks" and an influential African of his time in Britain who was the "first published African critic of the transatlantic slave trade." According Dr Kwamena Essilfie Adjaye, an economist and a prominent Fante, the name Quobena is a corruption of a Fante tribe name "Kobina,"(Kobena) a name given to every Fante male child born on Tuesday. Among the Fantes in Ghana, Kobina which means "the one who is a real man" can also be referred to as "Ebo" or "Ebow." His middle name Ottobah is also a corruption of Fante name "Antobam." Antobam means one who did not come to meet pampering. Its a name given to a fante child whose father died before they were born. The Cugoano is probably fante name Kweenu (anglicized now as Quainoo).


Quobna Ottobah Cugoano, whom Henry Louis Gates has dubbed the "invisible man" of the eighteenth century,was born about the year 1757, at Ajumako a village in what is today Ghana. When he was about 13, he was kidnapped and put on board a ship that carried him to Grenada. After nine or ten months in the slave gang there, and a further year on different West Indian islands, he was brought to England by his owner at the end of 1772 and set free. Advised to get himself baptized in order not to be sold into slavery again, he took the name John Stuart. Later, he entered the service of Richard Cosway, principal painter to the Prince of Wales, and before long emerged as one of the leaders and spokesmen of London's black community.
In 1786, Cugoano played a key part in the rescue of Henry Demane, a black man who had been kidnapped and was being shipped out to the West Indies. Cugoano and another community leader, William Green, reported the kidnapping to the white abolitionist Granville Sharp, who got a writ of habeas corpus, and rescued Demane at the last minute, just as the ship was weighing anchor.

The following year Cugoano published a powerful contribution to the campaign for the abolition of the slave trade, his Thoughts and sentiments on the evil and wicked traffic of the slavery and commerce of the human species. It is believed that Olaudah Equiano collaborated with him on this work. In it, Cugoano and his collaborator destroyed the arguments in defence of slavery; that black slaves in the Caribbean were better off than the European poor; that slavery had divine sanction; that Africans were, by nature and complexion, peculiarly suited to slavery. On the contrary, the slaves were bought and sold and dealt with as their capricious owners saw fit, 'even torturing and tearing them to pieces, and wearing them out with hard labour, hunger and oppression'. 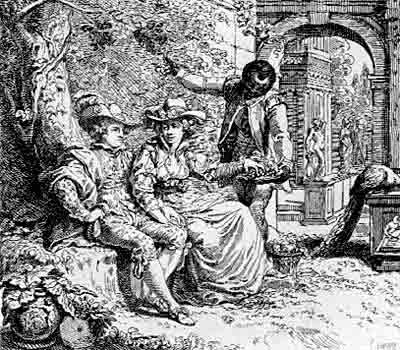 This etching by Richard Cosway shows the artist and his wife with a black servant, who may have been Quobna Ottobah Cugoano

Cugoano went further than just denouncing slavery. He was the first writer in English to declare that enslaved blacks had not only the moral right, but the moral duty to resist:

If any man should buy another man, and compel him to his service and slavery without any agreement of that man to serve him, the enslaver is a robber and a defrauder of that man every day. Wherefore it is as much the duty of a man who is robbed in that manner to get out of the hands of his enslaver, as it is for any hones community of men to get out of the hands of rogues and villains.

Cugoano sent copies of his Thoughts and sentiments to King George III, the Prince of Wales and the politician Edmund Burke; however, all remained supporters of the slave trade. In a postscript to a shorter version of his Thoughts, Cugoano announced his intention of opening a school, mainly for 'all such of his complexion as are desirous of being acquainted with the knowledge of the Christian religion and the laws of civilisation'. It is not known whether he succeeded in opening the school, nor what became of him after 1791. He was the first published African critic of the transatlantic slave trade, and the first African to demand publicly the total abolition of the trade and the freeing of the slaves - a position which scarcely any white abolitionist had taken by 1787.
Read Cugoano`s book Thoughts and Sentiments on the Evil of Slavery, here:http://www.amazon.co.uk/dp/B0030MQJJ6/ref=rdr_kindle_ext_tmb

Cugoano is Kidnapped and Sold into SlaveryThis extract, abridged from the Thoughts and Sentiments, describes how the young Cugoano was kidnapped, and put aboard a slave ship on the coast of Africa.At one point he saw the exact price he fetched: 'a gun, a piece of cloth, and some lead.' From Cape Coast Castle, he was taken by ship to the West Indies. After several years of enslavement there, his master brought him to England. The late 1780s found him working as a house servant in London.

Just as abolition organising got under way in 1787, he published a book, 'Thoughts  and Sentiments on the Evil and Wicked Traffic of the Slavery and Commerce of the Human Species'. Although one of the first pieces of writing by a black Briton about slavery, surprisingly few pages of the book are about Cugoano's own experience. It mostly consists of religious and philosophical argument. 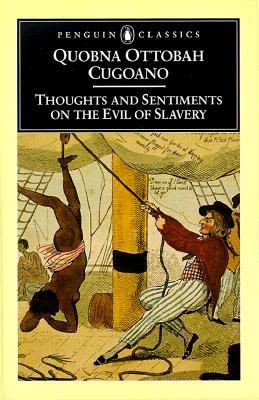 Cugoano Calls for a Righteous EmpireThis extract from the Thoughts and Sentiments comes from towards the end of the book, after Cugoano has argued at length that slavery and Christianity are incompatible. Cugoano's view that the British Empire could become a force opposed to slavery may seem odd now, but it was a widespread opinion in the late eighteenth century, and one which was embraced by the British government during the nineteenth century. However, whether the British government's motives for opposing slavery then were altruistic or self-interested remains a matter for debate.To put an end to the wickedness of slavery and merchandizing of men, and to prevent murder, extirpation and dissolution, is what every righteous nation ought to seek after; and to endeavour to diffuse knowledge and instruction to all the heathen nations wherever they can, is the grand duty of all Christian men. But while the horrible traffic of slavery is admitted and practiced, there can be but little hope of any good proposals meeting with success anywhere; for the abandoned carriers of it on have spread the poison of their iniquity wherever they come, at home and abroad. Were the iniquitous laws in support of it, and the whole of that oppression and injustice abolished, and the righteous laws of Christianity, equity, justice and humanity established in the room thereof, multitudes of nations would flock to the standard of truth, and instead of revolting away, they would count it their greatest happiness to be under the protection and jurisdiction of a righteous government. And in that respect, in the multitude of the people is the King's honour; but in the want of people, is the destruction of the Prince.We would wish to have the grandeur and fame of the British empire to extend far and wide; and the glory and honor of God to be promoted by it, and the interest of Christianity set forth among all the nations wherever its influence and power can extend; but not to be supported by the insidious pirates, depredators, murderers and slave-holders. And as it might diffuse knowledge and instruction to others, that it might receive a tribute of reward from all its territories, forts and garrisons, without being oppressive to any. But contrary to this the wickedness of many of the White People who keep slaves, and contrary to all the laws and duties of Christianity which the scriptures teach, they have in general endeavoured to keep the Black People in total ignorance as much as they can, which must be a great dishonor to any Christian government, and injurious to the safety and happiness of rulers.This extract taken from Thoughts and Sentiments on the Evil of Slavery, ed. Vincent Carretta (London and New York: Penguin, 1999), pp. 107-108. 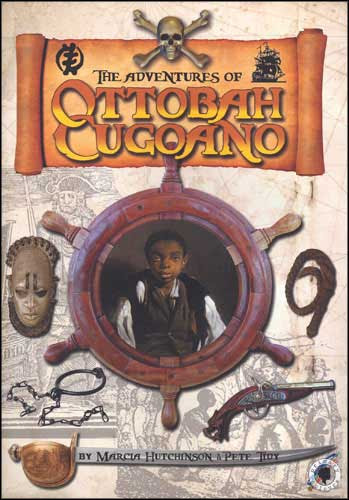 Quotes From Quobna Ottobah CugoanoQuobna Ottobah Cugoano was kidnapped by slave traders when he was 13 years-old in Africa in the late 1700s and taken to England. (His slave name was John Stuart.) After experiencing much cruelty and suffering, he finally got his freedom and learned to read and write.These quotations come from his book: Thoughts And Sentiments On The Evil And Wicked Traffic Of The Slavery And Commerce Of The Human Species, Humbly Submitted To The Inhabitants Of Great Brittain which was published in 1787. “I was brought from a state of innocence and freedom, and in a barbarous and cruel manner, conveyed to a state of horror and slavery.” QOC“How wonderful is the divine goodness displayed in the Old and New Testaments! O what a treasure to have and to be able to read therein.” QOC“Those men that are the procurers and holders of slaves are the greatest villains in the world. They must be lost to all sensibility thinking that the stealing, robbing, enslaving, and murdering of men are not crimes.” QOC“If a man have not love in his heart for his fellow creatures, all his other virtues are not worth a straw.” QOC“The destroyers and enslavers of men can not be Christians, for Christianity is the system of love, and its followers are devoted to honesty, justice, humanity, meekness, peace, and good will to all men.” QOC“Good soldiers of Jesus Christ have many battles to fight with their unbelief, with the perverseness of their nature, with evil temper, and with besetting sins.” QOC