It is a testament to the greatness of Martin Luther King Jr. that nearly every major city in the U.S. has a street or school named after him. It is a measure of how sorely his achievements are misunderstood that most of them are located in black neighborhoods.

Three decades after King was gunned down on a motel balcony in Memphis, Tenn., he is still regarded mainly as the black leader of a movement for black equality. That assessment, while accurate, is far too restrictive. For all King did to free blacks from the yoke of segregation, whites may owe him the greatest debt, for liberating them from the burden of America's centuries-old hypocrisy about race. It is only because of King and the movement that he led that the U.S. can claim to be the leader of the "free world" without inviting smirks of disdain and disbelief. Had he and the blacks and whites who marched beside him failed, vast regions of the U.S. would have remained morally indistinguishable from South Africa under apartheid, with terrible consequences for America's standing among nations. How could America have convincingly inveighed against the Iron Curtain while an equally oppressive Cotton Curtain remained draped across the South? 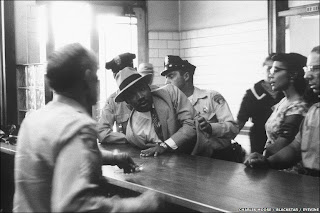 His love for  mankind especially his enemies shocked his friends and closest family.In one instance as shown in this photograph, Coretta was upset with the husband, who had been attacked the night before by a disturbed white racist but had not defended himself. Though the police urged King to press charges, he refused. “The system we live under creates people such as this youth,” he said. “I’m not interested in pressing charges. I’m interested in changing the kind of system that produces such men.” 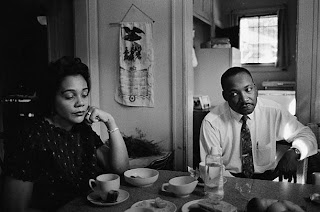 Coretta is upset with her husband

Dr king for what many people has not seen before was also a man who took opportunity to have fun with his friends and fellow civil right activists. A typical example is the rare photograph below showing Dr King playing pool stylishly to the admiration of people. 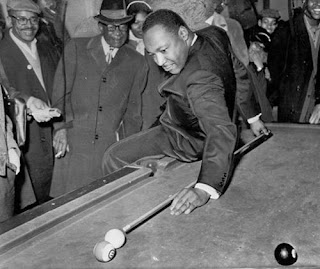 Spending time with his family as a dutiful and caring dad is one thing that Dr King never take for granted. he always remembered to spend time with his family. The man would be surprise if he were to be alive today and see us as black people both in America and Africa abandoning our family roles because he never shirk off his responsibilities as a comforting father despite his heavy schedules. 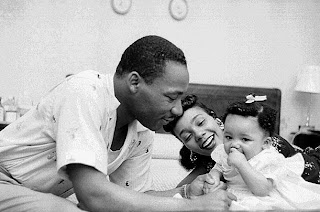 Rev king never misses his opportunity to be in his role as the table head for meals. 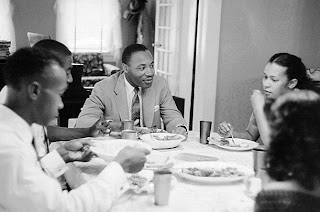 
And when his children came and the movement`s activities were at its apogee Dr king will always schedule time to have meals with his and children. He really taught us good family values as a leader as the photo below clearly shows. 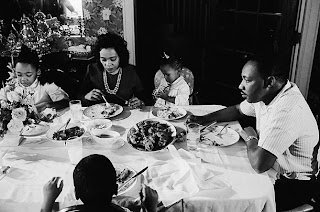 King and Coretta sit at their dining room table with their
daughters Yolanda and Bernice. They also had two sons,
Martin Luther King III and Dexter

Rev king as a family man was also there when his kids needed him. Even though King treasured the time with his family, his busy schedule frequently kept him away from home, leaving Coretta in charge of raising the children. 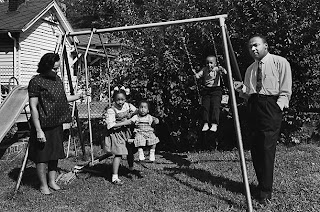 Dr King with his children at their backyard playground.


During the boycott, King emerged as a powerful and inspirational leader. As news of the boycott spread, donations supporting those involved poured in and King's words were heard by millions. Eventually, after 12 months, a federal court ruled that laws requiring segregated buses were unconstitutional and, on Dec. 20, 1956, King and other civil rights leaders assumed seats on the first integrated bus in Montgomery's history.

When he was home, King (the iconic civil right leader) spent his days composing sermons and speeches. This photograph below was taken by James Karales, one of only a few photographers whom King permitted to photograph him at home. 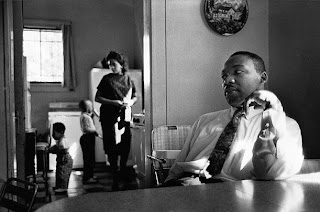 
Rev king just like every Black father of his time had difficulty explaining certain racial issues to their children on why they cannot do do certain things.King said in an interview that this photograph below was taken as he tried to explain to his daughter Yolanda why she could not go to Funtown, a whites-only amusement park in Atlanta. King claims to have been tongue-tied when speaking to her. "One of the most painful experiences I have ever faced was to see her tears when I told her Funtown was closed to colored children, for I realized the first dark cloud of inferiority had floated into her little mental sky." 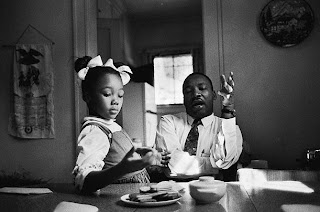 Moreover, King was a man of extraordinary physical courage whose belief in nonviolence never swerved. From the time he assumed leadership of the Montgomery, Ala., bus boycott in 1955 to his murder 13 years later, he faced hundreds of death threats. His home in Montgomery was bombed, with his wife and young children inside. He was hounded by J. Edgar Hoover's FBI, which bugged his telephone and hotel rooms, circulated salacious gossip about him and even tried to force him into committing suicide after he won the Nobel Peace Prize in 1964. As King told the story, the defining moment of his life came during the early days of the bus boycott. A threatening telephone call at midnight alarmed him: "Nigger, we are tired of you and your mess now. And if you aren't out of this town in three days, we're going to blow your brains out and blow up your house." Shaken, King went to the kitchen to pray. "I could hear an inner voice saying to me, 'Martin Luther, stand up for righteousness. Stand up for justice. Stand up for truth. And lo I will be with you, even until the end of the world.'" 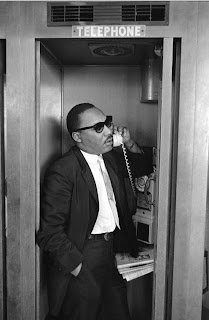