ELLA THE FIRST LADY OF JAZZ 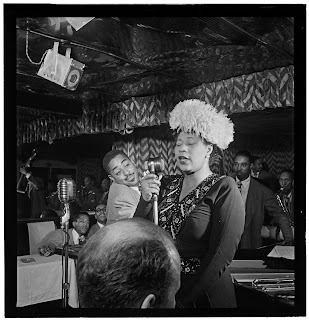 It isn't where you came from, its where you're going that counts.
– Ella Fitzgerald

Known as the "First Lady of Jazz" singer Ella Fitzgerald was born April 25, 1917, in Newport News, Virginia. From rather humble beginnings Fitzgerald and her smooth,silky voice climbed to the top of the jazz world. During her long career she worked with greats from Duke Ellington and Louis Armstrong to Dizzy Gillespie and Frank Sinatra. In all Ella recorded over 200 albums and around 2,000 songs in her lifetime. She died on June 15, 1996.
Early Years

Singer. Born Ella Jane Fitzgerald on April 25, 1917, in Newport News, Virginia, Fitzgerald was the product of a common-law marriage between William Fitzgerald and Temperance Williams Fitzgerald. Ella experienced a troubled childhood that began with her parents separating just a month after her birth.

With her mother, Ella moved to Yonkers, New York. In 1932 Ella's mother died unexpectedly, forcing Fitzgerald to move in with an aunt. These were difficult years for Ella. While she dreamed of being a dancer or making it as a singer, Ella spent a good deal of her time "running numbers" and acting as a lookout for a brothel.

She eventually dropped out of high school, and after being picked up by police found a new home at a reform school, where it's suspected she was abused.

In the autumn of 1934 Ella ran away from the reform school and started living on the streets. Still harboring dreams of becoming a singer, she entered an amateur contest at Harlem's Apollo Theater on November 21, 1934. She sang two songs that night, "The Object of My Affection" and "Judy", to win a $25 first place prize and eventually, capture the attention of renowned band leader and drummer, Chick Webb.

"I thought my singing was pretty much hollering, but Webb didn't," Fitzgerald would later recall.
Commercial Success

That unexpected performance at the Apollo set Fitzgerald's career in motion. In 1935 she recorded "Love and Kisses" with Webb and in 1938 she put out her first hit, "A-Tisket A-Tasket," which she co-wrote. Later that year Ella recorded her second hit, "I Found My Yellow Basket," which climbed to No. 3 on the charts.

Following Webb's death in 1939, Ella became the leader of the band, which was renamed Ella Fitzgerald and her Famous Orchestra.

Over the next six decades, Ella Fitzgerald sat atop the jazz world. She performed with fellow musical giants such as Duke Ellington and Dizzy Gillespie, Count Basie and Frank Sinatra. She even earned the moniker "The First Lady of Jazz" for her mainstream popularity and unparalleled vocal talents. Her unique ability to mimicking instrumental sounds helped popularize the vocal improvisation of "scatting" which became her signature technique.

While some critics complained that her style and voice lacked the depth of some her more bluesy counterparts, her success and the respect she garnered from the biggest names in the music industry showed that Fitzgerald was in a class all her own.

In all Fitzgerald recorded more than 200 albums and some 2,000 songs in her lifetime. Her total record sales exceeded 40 million. Her many accolades included 13 Grammy Awards, the NAACP Image Award for Lifetime Achievement, and the Presidential Medal of Freedom.
Later Years

Over the final two decades of her life, Ella's recordings marked a decline in her voice due to complications from diabetes. The disease left her blind, and she had both legs amputated in 1994. She made her last recording in 1989 and her last public performance in 1991 at New York's Carnegie Hall. Ella Fitzgerald died on June 15, 1996, at her home in Beverly Hills.

Fitzgerald was briefly married to Benny Kornegay, a convicted drug dealer and hustler, in 1941. She was married to bass player Ray Brown from 1947 to 1952; they adopted a child born to Fitzgerald's half-sister whom they christened Ray Brown, Jr. Fitzgerald.

In 2007 the United States Postal Service honored the late singer with an Ella Fitzgerald Commemorative Stamp.