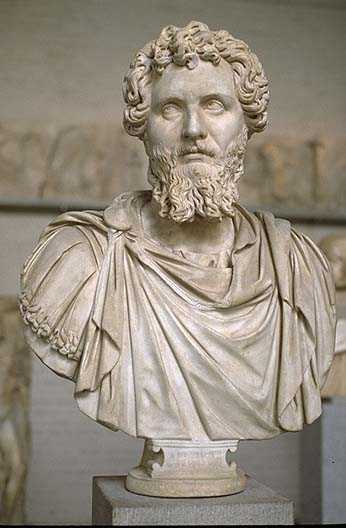 Severus came from a family that had become Roman citizens. In his career as an official at Rome and in the provinces he had been favored by the Emperor Marcus Aurelius. In the reign of Commodus he was appointed legate of the fourth legion on the Euphrates; this gave him the opportunity to become acquainted with affairs in the East. He married Julia Domna, a member of a priestly family of Emesa, who was the mother of Caracalla and Geta.

When the Emperor Pertinax was killed by the mutinous soldiers at Rome, Severus, who was then governor of Upper Pannonia, was proclaimed emperor at Carnuntium by the legions on the Danube. The fact that the leaders of the troops in the eastern and western parts of the empire were at once ready to follow him is evidence that Severus himself had shared in the conspiracy against the dead emperor.

Fight near Nisibis. Herodian does not mention how Severus expelled the Parthians and lifted their siege of Nisibis.

Severus had clear political vision, still he cared nothing for the interests of Rome and Italy. He nourished within himself the Punic hatred of the Roman spirit and instinct and furthered the provincials in every way. He was revengeful and cruel towards his opponents, and was influenced by a blindly superstitious belief in his destiny as written in the stars. With iron will he labored to reorganize the Roman Empire on the model of an Oriental despotism. The troops in the East had proclaimed as emperor the capable governor of Syria, Pescennius Niger. the legions in Britain, the governor Clodius Albinus. On the other hand the soldiers in Italy and the senators came over to the side of Severus; Julianus, the prefect of the Pretorian Guard, was executed.

Severus rested his power mainly upon the legions of barbarian troops; he immortalized them upon the coinage, granted them, besides large gifts of money and the right of marriage, a great number of privileges in the military and civil service, so that gradually the races living on the borders were able to force Rome to do their will.

The Pretorian Guard was made into a troop of picked men from the provinces; in the first years of the emperor's reign their commander was the shrewd Caius Fulvius Plautianus, who exerted a great influence over Severus. After making careful preparation for the decisive struggle, and having secured his opponent in Britain by the bestowal of the title of Caesar, Severus entered upon a campaign against his dangerous rival Niger. He defeated Niger's subordinate Ascellius Æmilius at Cyzicus and Niger himself at Issus. He then advanced into Mesopotamia, established the new Province of Osrhoene and the new legion called the Parthian. He divided several old provinces into smaller administrative districts. After this, while at Antioch, he declared war against Albinus and returned to Europe by forced marches. In 197 the decisive battle was fought with Albinus near Lyons in Gaul. Albinus had under him the legions of Britain, Gaul, Germany, and Spain, yet in spite of severe losses Severus was the conqueror.

The triumphal Arch of Septimius Severus stands in the Roman Forum.

Albinus was killed, his adherents were utterly destroyed in a bloody civil war, and their property was confiscated for the emperor. The common soldiers received the right of entering the Senate and the equestrian order. For the greater security of the imperial power the Parthian legion was garrisoned upon Mount Alba near Rome. Severus went to Asia a second time, traversed the countries on the Euphrates and Tigris, strengthened the Roman supremacy, and gave the natives equal rights with the Italians. He then went to Egypt where he granted the City of Alexandria the privilege of self-government. During the reign of Severus the fifth persecution of the Christians broke out. He forbade conversion to Judaism and to Christianity. The persecution raged especially in Syria and Africa.

Severus captures Ctesiphon.  Herodian appears to have understood this as a picture of the siege of Hatra ("engines of every type were brought up to the wall")

In 203 Saints Perpetua and Felicitas and their companions suffered martyrdom at Carthage. The emperor returned to Rome for the celebration of the tenth year of his reign, erected the triumphal arch that still exists, and strengthened his hold on his hordes of mercenaries by constant gifts of money and the bestowal of favors detrimental to military discipline. The Senate was replaced by the Consistorium principis, one of the members of which was the celebrated jurist Papinian. Although he had suffered for years from rheumatic gout, Severus went to Britain, where trouble had broken out, in order to give occupation to his sons, who were at deadly enmity with each other. He restored Hadrian's Wall, and strengthened again the Roman power in Britain.(http://www.newadvent.org/cathen/13721a.htm) 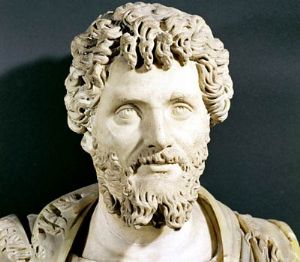 was the first of the soldier emperors and is counted among the 100 Great Black Britons.

He first adopted an official career and became a civil magistrate, later he became a military commander, and this took him to Rome. He proved to be an able and popular military leader, and after the murder of Marcus Aurelius' son Commodes, Septimus, supported by the provincial legions, made good his claim to the imperial throne of Rome in AD193. He quickly defeated and killed Rome governor Clodius Albinus in a great battle in Lyon in France, and became emperor of Rome.

This coin commemorates the victories of Septimius Severus over the Picts in what is now Scotland. These victories led to the construction of the Severan Wall, north of the more-popular Hadrian's Wall.

He rebuilt and restored Hadrian's Wall and gave Britain a century of peace; throughout his life he never lost his taste for African cooking. When he first entered Britannia, he was welcomed and hailed as the deliverer from the Gauls and Germans who continually pillaged and ravaged the island.
He quickly drove the aliens back across the English Channel, and gave Britannia semi-autonomous home rule status. In 208 AD, he supervised, refurbished, repaired and upgraded the mechanical defence system of Hadrian's Wall. In 211 AD, Septimus Severus died in York, of pneumonia at the age of 64.(http://www.100greatblackbritons.com/bios/septimus_severus.html ) 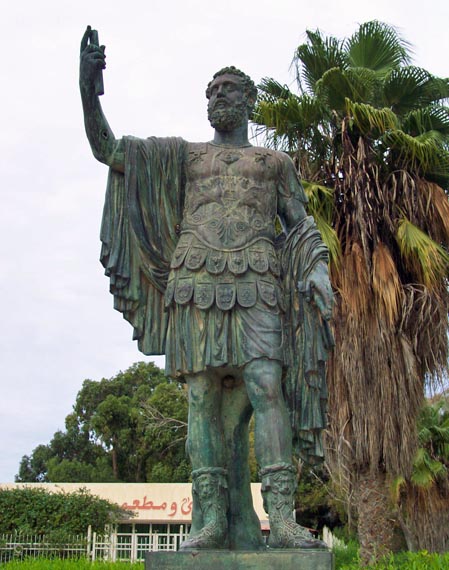 The Black Romans
Genetic evidence
It was recently suggested that African DNA might be found to be present in the local populations near to Hadrian’s Wall.
However, this would not conclusively show that the Black Roman soldiers on the wall intermarried with the local population because of the problem of ‘admixture’.
Admixture is a process whereby the DNA of a population becomes diluted over time and it cannot be shown at what period in time that dilution took place.
African Legacy
During his time in office, Septimius Severus legalised marriage during military service.
There is also evidence that that some Black Romans married, had children, and remained in Britain after their tour of duty.

Skeletons unearthed in a Romano British Cemetery outside York revealed the limb proportions of some of the men suggested that they were Black Africans.
Perhaps they might be considered to be Britain’s first Diaspora people, making Cumbria the birthplace of Black British history?