In addition to organizing the Black Panther Party and serving as its minister of defense, Newton unsuccessfully ran for Congress as a candidate of the Peace and Freedom Party in 1968. In 1971, between his second and third trials for the murder of John Frey, he visited China for ten days, where he met with Premier Chou En-lai and Chiang Ch’ing, the wife of Chairman Mao Tse-tung. While there he was offered political asylum. Newton studied for a Ph.D. in the history of social consciousness at the University of California in 1978. In 1985 the 43-year-old Newton was arrested for embezzling state and federal funds from the Black Panthers’ community education and nutrition programs. In 1989 he was convicted of embezzling funds from a school run by the Black Panthers, supposedly to support his alcohol and drug addictions. By this time the Panthers had turned to less violent activism. On August 22, 1989, Huey Newton was shot dead in Oakland, supposedly over a drug dispute. ironically in the same city streets of Oakland that saw the rise of the Black Panthers 23 years ago
Source: : http://www.africawithin.com/bios/huey_newton.htm 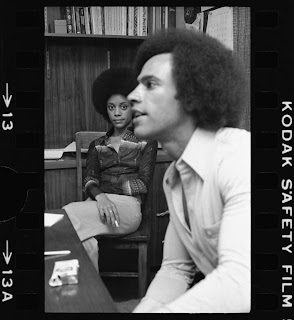 The young and radical Huey!
As a great inspirational leader of his time,Huey Newton co-founder of the Black Panther Party took opportunity to address the contentious issue of Gay Rights. In August 15 1970he gave this speech:
"
During the past few years strong movements have developed among women and among homosexuals seeking their liberation. There has been some
uncertainty about how to relate to these movements.
Whatever your personal opinions and your insecurities about
homosexuality and the various liberation movements among homosexuals
and women (and I speak of the homosexuals and women as oppressed
groups), we should try to unite with them in a revolutionary fashion.
I say ” whatever your insecurities are” because as we very well know,
sometimes our first instinct is to want to hit a homosexual in the
mouth, and want a woman to be quiet. We want to hit a homosexual in
the mouth because we are afraid that we might be homosexual; and we
want to hit the women or shut her up because we are afraid that she
might castrate us, or take the nuts that we might not have to start
with.
We must gain security in ourselves and therefore have respect and
feelings for all oppressed people. We must not use the racist attitude
that the White racists use against our people because they are Black
and poor. Many times the poorest White person is the most racist
because he is afraid that he might lose something, or discover
something that he does not have. So you’re some kind of a threat to
him. This kind of psychology is in operation when we view oppressed
people and we are angry with them because of their particular kind of
behavior, or their particular kind of deviation from the established
norm.
Remember, we have not established a revolutionary value system; we are
only in the process of establishing it. I do not remember our ever
constituting any value that said that a revolutionary must say
offensive things towards homosexuals, or that a revolutionary should
make sure that women do not speak out about their own particular kind
of oppression. As a matter of fact, it is just the opposite: we say
that we recognize the women’s right to be free. We have not said much
about the homosexual at all, but we must relate to the homosexual
movement because it is a real thing. And I know through reading, and
through my life experience and observations that homosexuals are not
given freedom and liberty by anyone in the society. They might be the
most oppresed people in the society.
And what made them homosexual? Perhaps it’s a phenomenon that I don’t
understand entirely. Some people say that it is the decadence of
capitalism. I don’t know if that is the case; I rather doubt it. But
whatever the case is, we know that homosexuality is a fact that
exists, and we must understand it in its purest form: that is, a
person should have the freedom to use his body in whatever way he
wants.
That is not endorsing things in homosexuality that we wouldn’t view as
revolutionary. But there is nothing to say that a homosexual cannot
also be a revolutionary. And maybe I’m now injecting some of my
prejudice by saying that “even a homosexual can be a revolutionary.”
Quite the contrary, maybe a homosexual could be the most
revolutionary.
When we have revolutionary conferences, rallies, and demonstrations,
there should be full participation of the gay liberation movement and
the women’s liberation movement. Some groups might be more
revolutionary than others. We should not use the actions of a few to
say that they are all reactionary or counterrevolutionary, because
they are not.
We should deal with the factions just as we deal with any other group
or party that claims to be revolutionary. We should try to judge,
somehow, whether they are operating in a sincere revolutionary fashion
and from a really oppressed situation. (And we will grant that if they
are women they are probably oppressed.) If they do things that are
unrevolutionary or counterrevolutionary, then criticize that action.
If we feel that the group in spirit means to be revolutionary in
practice, but they make mistakes in interpretation of the
revolutionary philosophy, or they do not understand the dialectics of
the social forces in operation, we should criticize that and not
criticize them because they are women trying to be free. And the same
is true for homosexuals. We should never say a whole movement is
dishonest when in fact they are trying to be honest. They are just
making honest mistakes. Friends are allowed to make mistakes. The
enemy is not allowed to make mistakes because his whole existence is a
mistake, and we suffer from it. But the women’s liberation front and
gay liberation front are our friends, they are our potential allies,
and we need as many allies as possible.
We should be willing to discuss the insecurities that many people have
about homosexuality. When I say “insecurities,” I mean the fear that
they are some kind of threat to our manhood. I can understand this
fear. Because of the long conditioning process which builds insecurity
in the American male, homosexuality might produce certain hang-ups in
us. I have hang-ups myself about male homosexuality. But on the other
hand, I have no hang-up about female homosexuality. And that is a
phenomenon in itself. I think it is probably because male
homosexuality is a threat to me and female homosexuality is not.
We should be careful about using those terms that might turn our
friends off. The terms “faggot” and “punk” should be deleted from our
vocabulary, and especially we should not attach names normally
designed for homosexuals to men who are enemies of the people, such as
Nixon or Mitchell. Homosexuals are not enemies of the people.
We should try to form a working coalition with the gay liberation and
women’s liberation groups. We must

As a radical revolutionary civil right activist,Huey was also a crowd puller as his clenching fist was always adored by his admirers.

Huey P. Newton, national defense minister of the Black Panther Party, raises his clenched fist behind the podium as he speaks at a convention sponsored by the Black Panthers at Temple University’s McGonigle Hall in Philadelphia, Pa., Saturday, Sept. 5, 1970. He is surrounded by security guards of the movement. The audience gathered is estimated at 6,000 with another thousand outside the crowded hall. (AP Photo)


Here is a video of William Buckley interview with the iconic revolutionary activist on Filing line. It shows that the intellectual hardcore Huey was a shy person.

Newton, right, with Black Panther Party co-founder Bobby
In possibly more ways than not, Newton saw the gun as a vehicle for rhetoric rather than a vehicle for violence. It was supposed to get people looking and thinking. Despite his insistence that violent armed struggle would be necessary for a revolution, as well as his own conflicts with violence, in truth Newton had hoped that the gun itself would be enough to force the oppressors back, not the actions of the gun. Violence was only necessary when in self-defense, not in aggression. Many Americans both within and at large had trouble understanding the true meaning of armed self-defense and the gun was seen and used as a means of violence, not as symbol for empowerment and self-determination. (http://socialjustice.ccnmtl.columbia.edu/index.php/Huey_P._Newton_::_Philosophy_::_Armed_Self-Defense)

To Huey Newton when it comes to the issue of fighting for the freedom of the black people, he was never a "Pacifist." He is one great leader if one likes his him or not, the world ought to pay tribute to him for his brave and selfless fight for racial equality.