ABRAM PETROVICH GANNIBAL, THE SLAVE WHO BECAME A MAJOR-GENERAL OF THE RUSSIAN ARMY, MILITARY ENGINEER,GOVERNOR OF REVAL AND NOBLEMAN OF RUSSIAN EMPIRE 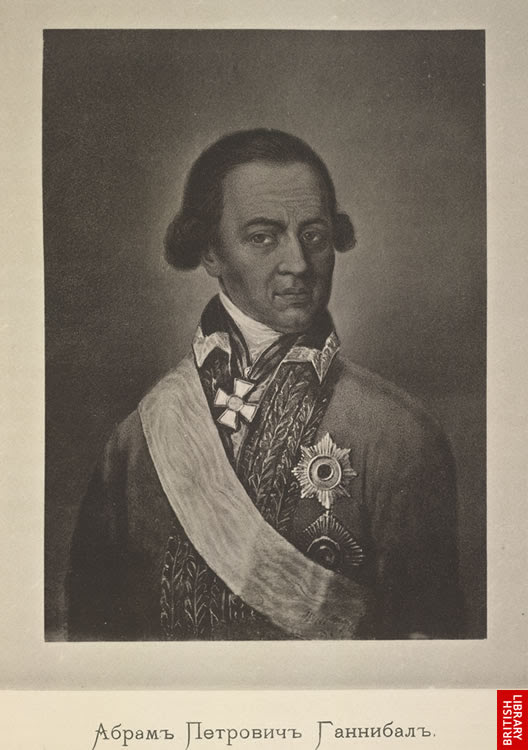 The supposed Portrait of  Abram Petrovich Gannibal that has been disputed
by Hugh Barnes,author of Gannibal: The Moor of Petersburg

Sold into Turkish slavery, Abram Petrovich Hannibal was brought as a black servant to Czar Peter I, known as Peter the Great. He became one of the royal favorites, a general-in-chief and one of the best educated men in Russia. His great-grandson was Alexander Pushkin, the famous Russian writer who later glorified the deeds of his black ancestor in his book, The Negro of Peter the Great.

Hannibal was born on an unknown date around 1696 in the principality of Logon in present day Cameroon. Abducted by a rival tribe, Hannibal was sold to Turkish slave traders who brought him to Constantinople in 1703. As an eight-year-old boy he came to the court of Peter the Great who adopted him immediately. Being the Czar's godson, Hannibal assumed his name, Petrovich, and became his valet on Peter's various military campaigns and journeys. When the Czar visited France in 1716, Hannibal was left behind in Paris to study engineering and mathematics at a military school. Two years later, he joined the French army and fought in the war against Spain. In January 1723, Hannibal finally returned to Russia.

To Hannibal's misery, his protector Peter the Great died in 1725, leaving the black artillery lieutenant in the dependence of the royal advisor Prince Menshikov, who–due to his dislike for Hannibal–assigned him to Siberia and later to the Chinese border where his task was to measure the Great Wall.

Hannibal’s fortunes changed in 1741, when Empress Elisabeth took the throne and Hannibal was allowed to officially return from his exile although in fact he had done so clandestinely in 1731. Five years after his illegal return, he married his second wife Christina Regina von Schöberg, the daughter of a Swedish army captain, who bore him eleven children. One of his sons named Osip was the grandfather of the poet Alexander Pushkin.

Although it had been his wish to retire, Empress Elisabeth did not want to abandon Hannibal and his engineering skills. He was made commander of the city of Reval between 1743 and 1751 and by 1760 had been promoted to the rank of a full general. During his military career he oversaw various projects such as the construction of the Ladoga Canal and Russian fortresses. Abram Petrovich Hannibal died on April 20, 1781, as one of the leading pioneers of his country and probably the first outstanding engineer in Russian history.

WHERE EXACTLY IN AFRICA DOES ABRAM PETROVICH GANNIBAL
COMES FROM?
There is a raging argument among historians and academicians about the actual place in Africa that Abram Petrovich Gannibal comes from. Wikipaedia: http://en.wikipedia.org/wiki/Abram_Petrovich_Gannibal claims  "he was born in 1696 in a village called "Lagon", in present day Eritrea, located "on the northern side of the Mareb River..." (which serves as much of the modern border between Ethiopia and Eritrea). On an 1810 map by Henry Salt, Logo appears in Ethiopia (the area corresponds to today's Loggo Sarda, which had its own rulers, and which is inhabited by Christian Tigrayans and Muslim Saho; others claim it to correspond to nearby Loggo Chewa further west in Eritrea). "As the other sons were brought to their father with their hands trussed up with a rope, he enjoyed freedom of the youngest son swimming in his father's fountains" (Pushkin's notes to Eugene Onegin). The research (1996) of Dieudonné Gnammankou suggests he may actually have been from what is now the Sultanate of Logone-Birni on the Logone River, in Cameroon, south of Lake Chad."
However, in a recent article entitled " Of African Princes and Russian Poets" in The New York Times newspaper`s Opinion pages  written by I.H.T. Op-Ed Contributor, Serge Schmemann in November 12, 2010, he confirmed Mr Gnammankou`s finding of Cameroon as Abram Gannibal`s original home.

Schmemann writes "In Russia, it is common knowledge that Pushkin was descended from an African who was raised to high rank by Czar Peter the Great. Pushkin’s African ancestry was evident in his appearance, and the poet was proud of the heritage, using Gannibal as the model for an unfinished novel known in English as “The Negro of Peter the Great.”
But it is only in recent years that Gannibal, and Pushkin, have become sources of pride for Cameroon. The main reason for that is the research done by an African historian who pored over Russian, French and African sources to conclude that Gannibal most likely began life as the son of a chief in the ancient sultanate of Logone-Birni. Indeed, it was the findings of the historian, Dieudonné Gnammankou, himself from Benin, that led to the little celebration in La Fère......."

He went on to write that " Gannibal’s roots in Africa, however, long remained vague. Russian biographers decided early on that he was Ethiopian, though the only known fact was that he himself wrote in a letter to Empress Elizabeth, Peter the Great’s daughter, that he was from the town of “Lagon.” Vladimir Nabokov, conducting research for his definitive translation of Pushkin’s “Eugene Onegin,” was the first to cast serious doubt on the Ethiopian angle. But it was Mr. Gnammankou who first made a strong case in 1995 that “Lagon” was Logone, the capital of the ancient Kotoko kingdom of Logone-Birni on the southern side of Lake Chad, now located in northern Cameroon.
Mr. Gnammankou’s thesis caused something of a stir in Russia, where Pushkin has the status of a god. Roots in black Africa, Mr. Gnammankou suspects, seemed less acceptable than roots in the ancient Christian kingdom of Ethiopia. Nonetheless, his book on Gannibal was translated into Russian in 1999 and was judged the best book on Pushkin that year at the Moscow Book Fair. In 2000, a documentary about Gannibal shown on Russian television included scenes shot in Logone, as well as an interview with Mr. Gnammankou.
In Logone-Birni, the discovery of a tie to one of the world’s great poets was a sensation. Sultan Mahamat may, in fact, be a distant relative of Gannibal. The sultan claims to be the 47th in his line, and Mr. Gnammankou believes that Gannibal was most likely the son of the local ruler. He believes the boy was kidnapped in 1703 by a neighboring chief to be given as tribute to the newly enthroned sultan in Constantinople. There, the boy was converted to Islam as Ibrahim, which became Abraham, or Abram, when Czar Peter had him baptized in the Russian Orthodox faith.
The ceremony at La Fère was thus something of a personal triumph for Gnammankou, who was the main speaker at a subsequent symposium — and whose wife, Joëlle Esso, a professional singer, entertained the gathering with rousing songs she wrote about Gannibal and Pushkin (“Le czar le rappelle en Russie/ Hannibal n’en a pas très envie ...”).
The fact that an African could rise to high rank in the Russian and French royal service in the 18th century figured prominently in the speeches of the day. For Gannibal, Gnammankou said, Russia became “his land of liberty, which gave him the means of fulfilling his talents.” In return, Russia gained its greatest poet. 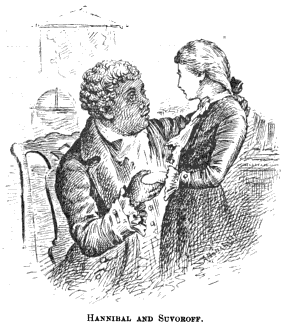 Gannibal married twice and had 11 children. His first wife was Evdokia Dioper, a Greek woman. The couple married in 1731 and had one daughter. Unfortunately Dioper despised her husband, whom she was forced to marry. When Gannibal found out that she had been unfaithful to him, he had her arrested and thrown into prison, where she spent eleven years living in terrible conditions. Gannibal began living with another woman, Christina Regina Siöberg (1705–1781), daughter of Mattias Johan Siöberg and wife Christina Elisabeth d'Albedyll, and married her bigamously in Reval (now Tallinn, Estonia), in 1736, a year after the birth of their first child and while he was still lawfully married to his first wife. His divorce from Dioper did not become final until 1753, upon which a fine and a penance were imposed on Gannibal, and Dioper was sent to a convent for the rest of her life. Gannibal's second marriage was nevertheless deemed lawful after his divorce. 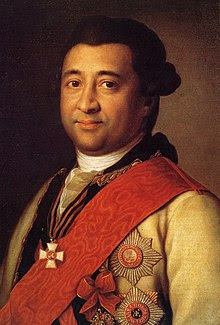 Ivan Gannibal, Abram's son
On her paternal side, Gannibal’s second wife was descended from noble families in Scandinavia and Germany: Siöberg (Sweden), Galtung (Norway) and Grabow (Denmark and Brandenburg). Her paternal grandfather was Gustaf Siöberg, Rittmester til Estrup, who died in 1694, whose wife Clara Maria Lauritzdatter Galtung (ca. 1651–1698) was the daughter of Lauritz Lauritzson Galtung (ca. 1615–1661) and of Barbara Grabow til Pederstrup (1631–1696). Abram Gannibal and Christina Regina Siöberg had ten children, including a son, Osip. Osip in turn would have a daughter, Nadezhda, the mother of Aleksandr Pushkin. Gannibal's oldest son, Ivan, became an accomplished naval officer who helped found the city of Kherson in 1779 and attained the rank of General-in-Chief, the second highest military rank in imperial Russia.
Here is the line of Pushkin the great Russian Poet: 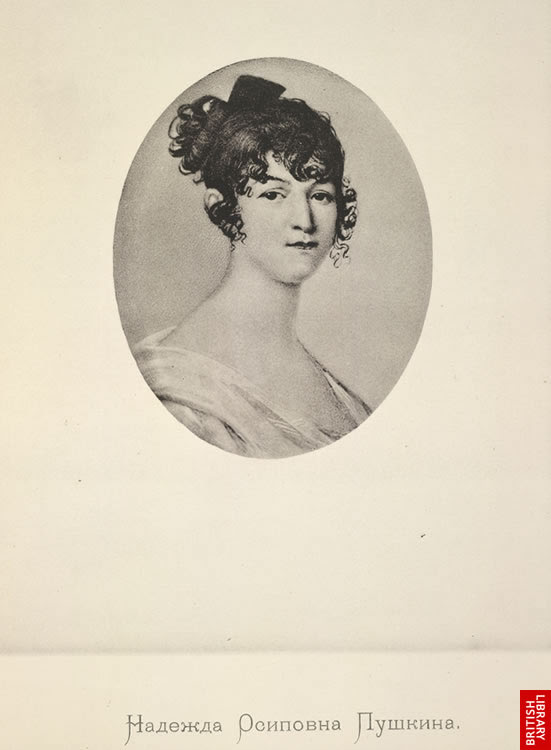 Aleksandr Pushkin, from his unfinished novel Peter the Great's Moor (1827) translated from Russian into English by Justin Erik Halldór Smith,the poet shows us his African ancestry in the following write up:
"I've noticed, brother, that you're feeling down," said Peter. "What's missing in your life?" Ibrahim assured his lord that he was satisfied with his lot and that he did not want anything more.
"Good," his lord said, "if there is no reason for it, then I know how to cheer you up."
When their work was concluded, Peter asked Ibrahim:
"Did you like that girl with whom you danced the minaret at the last assembly?"
"She is very sweet, sir, and is a modest and good girl, it seems."
"Then I'll introduce you to her soon. Would you like to marry her."
"Me, sir?"
"Listen, Ibrahim, you are a lonely man, without family or tribe, strange to everyone but me. If I die today, what will come of you tomorrow, my poor blackamoor? You need to make an effort while there is still time; find your foothold in new connections, enter the ranks of the Russian gentry."
"Sir, I am pleased with the patronage and the kindness of your highness. May God grant that I not outlive my Tsar and benefactor, I want nothing more. But if I intended to marry, would the young woman and her family agree? My appearance..."
"Your appearance! What nonsense! Why, you're a regular beau! The young woman is obliged to obey the will of her parents, and look, what is old Gavrila Rzhevskiï going to say when I myself am your wedding's sponsor?" At this the lord called for the sleigh to be brought, and left Ibrahim immersed in his deep reflections.

"Marriage!," thought the African. "Why not? Am I really fated to live out my life in solitude, without knowing the greatest pleasures and the most solemn duties of a man, just because I was born beneath the fifteenth parallel? It's a childish objection to suppose that I could never hope to be loved! Can one really believe in love? Does it really exist in the frivolous heart of a woman? Forever declining to fall victim to sweet delusions, I've given in to other temptations, even greater still. My lord is right: I should see to my future fate. My marriage to the young Rzhevskaia will unite me to the proud Russian gentry, and I will cease to be a stranger in my new homeland. I will not demand love from my wife, but will rest content with her loyalty, and I will transform her friendship into lasting tenderness, trust, and forbearance."

Kindly look for this book below and the review by Andrew Kahn who teaches Russian Literature at the University of Oxford. He has edited Pushkin's fiction for Oxford World's Classics for more in depth information on Abraham Petrovich Gannibal.


Gannibal: the Moor of Petersburg