EMPEROR MANELIK II, THE ETHIOPIAN KING WHO DEFEATED THE ITALIANS IN THE BATTLE OF ADWA 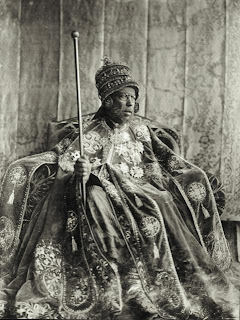 ‘Enemies have now come upon us to ruin our country and to change our religion. Our enemies have begun the affair by advancing and digging into the country like moles. With the help of God I will not deliver my country to them. Today, you who are strong, give me your strength, and you who are weak, help me by prayer.’
—Menelik II, Mobilization Proclamation

Born in 1844, Menelik II was one of the most celebrated of Ethiopia’s rulers, and led the most successful campaign of African resistance to repel the onslaught of European colonialism.

Ethiopia has had a monarchy for most of its history, and the Ethiopian dynasty can trace its roots to the 2nd century BC. Ethiopia is also one of the oldest sites of human existence known to scientists today, having yielded some of humanity’s oldest traces. Ethiopia is the worlds second oldest christian country.

Menelik’s reign (1889-1913) coincided with the European Scramble for Africa. After serving as governor of Shoa for twenty-five years, Menelik became emperor in 1889. During his reign, he doubled the area he inherited, incorporating vast areas of southern Ethiopia into his domain, mainly through conquest.

Always eager to embrace new technology in his quest to modernize ancient Ethiopia, Menelik’s innovations were unprecedented in Ethiopian history. Among these were first and foremost the creation of the capital, Addis Ababa, in the mid 1880s; construction of modern bridges and telegraph lines; concession for a railroad; establishment of the bank of Abyssinia, the first hotel, hospitals, and schools; national currency; mint; a postal system and national newspaper.

Italy, with a colony already established in Eritrea, had designs on Ethiopia. In 1889, Ethiopia and Italy negotiated the Treaty of Wuchale. Written in Amharic and Italian, the most significant article of the treaty was viewed differently by both parties. The Amharic text stated that Italy’s services were available to the emperor for all communications with foreign powers, while the Italian text made this compulsory.

Italy applied this article to claim a protectorate over Ethiopia, which was duly recognized by the European powers. To affirm their claim, the Italians, aided and abetted by the French and British, advanced into northern Ethiopia and, in January 1890, occupied the town of Adwa.

While the dispute was being debated, Menelik was simultaneously importing large amounts of arms from France and Russia, and continuing to expand his domain. Finally expressing his disapproval of the Treaty of Wuchale and Italy’s fallacious claim, he informed the European powers that “Ethiopia has need of no one, she stretches her hand unto God.”

Recognizing his country’s sovereignty, religion, and way of life was at stake, Menelik mobilized his army. The confrontation occurred at Adowa on March 1, 1896, where Ethiopia decisively defeated the Italian invaders. It was the first major African victory over an European Army since Hannibal’s time two thousand years before. On October 16, 1896, the Italians agreed to The Peace Treaty of Addis Ababa, which nullified the Treaty of Wuchale and recognized the absolute independence of Ethiopia.

Menelik maintained his independence and unified his country by defeating the Europeans. Ethiopia’s international prestige in the world was enhanced and its victory over the Europeans provided Africans in the Diaspora with a much-needed source of pride, inspiration and hope.

Menelik displayed great foresight in developing his military strength, which proved to be considerably superior to the Italian army he encountered, and also in using European trade and technology without yielding any political ground. In addition, his diplomatic manoeuvres exploited the greed of Italy, France, and Britain and shrewdly played them off against each other. 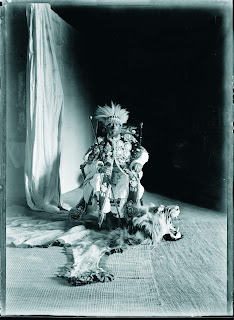 Emperor Menelik II was born in August 1844, and baptized as Sahle Mariam, the son of the future King Haile Melekot of Shewa and Woizero Ijigayehu, and thus grandson of the then reigning King Sahle Selassie of Shewa. In 1855, as Emperor Tewodros II began a campaign to re-incorporate Shewa into the Ethiopian Empire, King Haile Melekot died of illness, causing the Shewan resistance to collapse. Eleven year old Menelik was captured by the Emperor and taken prisoner to Gondar. Although officially a prisoner, Menelik was treated as a son by Tewodros and became a great favorite. However, due to his Solomonic blood which not only made him the heir to the throne of Shewa, but also among the strongest claimants to the Imperial Crown of all Ethiopia, Menelik was always a captive of Tewodros. Tewodros II eventually married Menelik to his daughter Alitash. However, Menelik would abandon his wife and escape from the mountain fortess of Magdalla and returned to Shewa in 1866 where he was proclaimed King and launched a new resistance against Tewodros, making a public claim on the Imperial Throne itself.

Rise to power
Following the defeat and suicide of Tewodros II during his battle against the British at Magdalla in 1868, Menelik failed in asserting his claim to the Imperial Throne and eventually recognized Yohannes IV as Emperor. Upon Yohannes IV’s death at the Battle of Mettema in 1889, Menelik was proclaimed Emperor Menelik II of Ethiopia, and assumed the Imperial Throne. He defeated the Italian invasion of 1896 at Adwa, the first defeat of a European Colonial power by an African army and thus gained recognition of the Ethiopian Empire by all the World Powers of the day. Menelik II was married to Empress Taitu Bitul, by whom he had no children. Previous to his marriage to Taitu, he had been married to the significantly older Woizero Baffena of Merabete, by whom he also had no children. He had two daughters, Zewditu, Shewarega and a son Wossen Seged (who died in infancy) . Menelik II died in 1912 and was succeeded by his grandson Lij Iyasu. Menelik II is credited with initiating the modernization and development campaign in Ethiopia that would be carried further by Emperor Haile Selassie.
Menelik a firm advocate for progression
The Emperor’s reign saw the arrival of the first motor car, the first telephone and the establishment of the first bank, the first wireless radio, and the first modern hotel (built by his wife Empress Taitu ). Menelik also established the company that began building the Addis-Djibouti railroad that was completed after his death. The Emperor established the first modern school, the Menelik II School, and the first hospital. The Emperor was deeply interested in new inventions and in advances in science and technology. Ethiopia established permanent diplomatic ties with world powers for the first time as a result of her defeat of the Italian invasion.
Emperor Menelik II was renowned for his deep compassion for his subjects. Early in his reign a terrible rinderpest out break had killed off so many cattle that plowing the fields had become impossible resulting in famine. Seeing the hardships that his subjects were going through, the Emperor forgave all taxes. People began saying that the Emperor Menelik’s love was the gentle love of a mother rather than the stern love of a father, so he was referred to most often as “Imiye Menelik” (dearest mother Menelik), a nick-name that stuck and by which he is often referred to up to this day.
During his reign as king of Shewa and later as Emperor, he re-incorporated much of southern Ethiopia back into the Empire after years in which these territories had only nominally recognized Ethiopian hegemony. 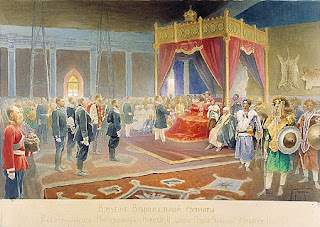 Emperor Menelik II of Ethiopia recieves a Russian mission sent by Czar Alexander III in the Adarash (Great Throne Hall) of the Imperial Palace in 1898.