OBALUWAYE FESTIVAL OF TRINIDAD AND TOBAGO: THE FESTIVAL IN HONOR OF YORUBA BABALU-AYE DEITY

The Obaluwaye or Obaluaye (Shakapana) festival is organized annually for Ifa/Orisha devotees around March by the Ojubo Orisa Omolu at their shrine headquarters, 32 Egypt Extension, Crown Trace, Chaguanas in Trinidad and Tobago. Though ethnic Akans (especially the Fantes) constitute the largest group of people that make Trinidad and Tobago population, Yoruba religion is however the most popular on the Island.

An Orisha celebrant, second from left, who goes into a trance is escorted into the Obaluwaye festival at Enterprise, Chaguanas

All the devotees of Yoruba deity Babaluye in Ifa/Orisha worship meet at the shrines before proceeding into the forest at Ragoonanan Road, Longdenville to perform their rituals. According to Baba Adeloni, the head priest at the Ojubo Orisa Omolu "the festival started in 1996."

Every year this festival contributes to the spiritual elevation of Ifa/Orisa devotees and the community on a whole. The Festival is as a period of prayer and fasting for members to lighten not only individual burdens but those affecting our country. Devotees also pray and make supplication to their patron Obaluwaye for the healing of all ills that have been plaguing the country. As it is the custom, all are invited to make offerings to Obaluwaye.

Epidemics of fever and skinned disorders are dreaded traditional Yoruba society as divine visitation.  The tutelary divinity of Sanponna cult was called Obaluaye (Universal King) no doubt because of the rapid spread of the contagious disease that leads to terminal illness or loss of life.
Saponna’s praise names
Olode (The scourge of town)
Olofa (The arrow shooter)
A fi olugbongbo daju ija ru (User of baton to cause more confusion)
This prayer is not spoken in public ceremonies
Gbogbo enia ni nsun ti won ko ji. Saponna dakun ji mi yara mi
All people sleep and never wake up.  Spirit of Sickness please wake me up in my room
Saponna f’ile mi bun mi Ai f’ile mi bun mi ko wo
Spirit of Sickness spare my house, it is bade if you do not spare my house

Obaluage is most crucial among the Orisa/Orisha that sent to the planet Earth by olodumare. He is also known as Baba-ode, baba-Oye, oluaye or olode. But, he has a specific name which is commonly used by people; the name is (sanponna). He is the elder brother to Sango (god of thunder) and Ogun (god of iron) in heavenly. In fact this Orisa (Obaluaye) is very strong and powerful.
Whenever the priest casts Ifa, after describing / stating the sacrifice for Esu then, that of saponna will be asked before that of “Iyami” (Withches). Obaluaye is a fantastic and good orisa that gives riches, wealth, children, Wisdom, will power and other good things to people as well as conquering  enemies for then.
The children of Obaluaye household of clan are given names like Olayemi, Obidiran, obigbemi and so on. They can also be referred to as- Oluyemii, Olu Kayode, Olusegun, Olubunmi, Olufunke, Adeolu, Olaolu, and so on.

However, they can also bear names like – Obayemi, Obasanjo, Obafemi, Obafunso, Obawole etc.
As usual, many Orisas have paths or generation, among the twig / branches or paths of Obatala are Ogiyan Olufon, popo and so on, but, as for obaluaye the twig / branches include, Alagbade Baale, jagun, Aniriilewe and Wariwarium. All those branches have common and cheap taboos, which include rearing cat, whistling, smoking and the use of palm frond broom to squish vegetable (while preparing Yoruba soup). Also Obaluaye has his favorite foods which include palm wine, snail, pounded yam, bearded matured he-goat, corn pudding and cooked grinded beans.

The cloth Obaluaye  uses is cam wood cloth and anybody can be a devotee and get initiated but, he has his chosen mediums. Obaluaye week is the same as that of ogun. As we have known that we beat gong in the shrine or grove of ogun, we used rattle gourd in Sango shrine.
Obaluaye’s favorites drums are band drum or Bata, though, he likes to dance to any kind of drum. Agains, some of the praise or songs of obaluaye go thus;

ENGLISH VERSION
Alagbada (some one who wears agbada style)
The son of the rich
The son of the wealthy
Okeke, who pampers the wife with coral beads
He says, it is whatever one has that one uses to pamper his wife.
Okeke, who assists the palmwine seller to drop his goods
You do not follow the palm-wine taper long.
But you follow the palm-wine taper to the middle of the farm
It is time for solat suur, great god like suur.
It is time for prayer go and make the call
I read Arabic script on the leather mats.
I performed ablution in the place where shaft is raining
Religion elder will not remove his cap before he greets good.
As god wants it, father will not remove his cap to greet the lord.
Heavenly Muslim has arrived
Asked earthly Muslim to be careful because
Forever priest is the one we believe as a good and fanatical Muslim.

BABALU-AYE, THE YORUBA ORISA
In the religious system of Orisha worship, Babalú-Ayé is the praise name of the spirit of the Earth and strongly associated with infectious disease, and healing. He is an Orisha, representing the deity Olorun on Earth. The name Babalú-Ayé translates as “Father, lord of the Earth”  and points to the authority this orisha exercises on all things earthly, including the body, wealth, and physical possessions. In West Africa, he was strongly associated with epidemics of smallpox, but in the contemporary Americas, he is more commonly thought of as the patron of leprosy, influenza, and AIDS. Although strongly associated with illness and disease, Babalú-Ayé is also the deity that cures these ailments. Both feared and loved, Babalú-Ayé is sometimes referred to as the “Wrath of the supreme god” because he punishes people for their transgressions. People hold Babalú-Ayé in great respect and avoid calling his actual name, because they do not wish to invoke epidemics.

His worship is widely associated with the Earth itself, and his shrines are often separated from commonly travelled areas. His ritual tools include a ritual broom for purification, a covered terra-cotta vessel, and abundant cowry shells. Usually considered hobbled by disease, he universally takes grains as offerings.

Origins in Africa
While it is difficult to identify a precise origin for Babalú-Ayé, he has a long history in West Africa among the Ewe, Fon, and Yoruba.

Yoruba
Widely venerated in Yoruba areas, he is usually called Shopona and said to have dominion over the Earth and smallpox. He demands respect and even gratitude when he claims a victim, and so people sometimes honor him with the praise name Alápa-dúpé, meaning “One who kills and is thanked for it”. In one commonly recounted story, Shopona was old and lame. He attended a celebration at the palace of Obatalá, the father of the orishas. When Shopona tried to dance, he stumbled and fell. All the other orishas laughed at him, and he in turn tried to inflect them with smallpox. Obatalá stopped him and drove him in the bush, where he has lived as an outcast ever since. Some people use this story to suggest that Shopona went into exile among the neighboring Fon peoples to the West of the principal Yoruba areas.

Fon
In Fon areas of Benin, the deity is most commonly called Sagbatá. Here too he owns the Earth and has strong associations with smallpox and other infections. His worship is very diverse in Fon communities, where many distinct manifestations of the deity are venerated. Because the dead are buried in the Earth, the manifestation called Avimadye is considered the chief of the ancestors. Because all people live on the Earth, which makes our existence possible, and because Sagbatá is considered by many to be the eldest child of the deity, he is considered the most senior deity (in stark contrast to Yoruba notions about the seniority of Obatalá).

Ewe
Among the Ewe people of Ghana and Togo, there is a similar figure with the praise name Anyigbato (Ewe for "Owner of the Earth") who is closely associated with sickness and displaced peoples. He is believed to wander the land at night, wearing a garment of rattling snail shells; the snail shells are also a key feature of his fetish.

Manifestations in African diaspora traditions
Names of the deity, sacred narratives about his life, and ritual practices from both Yoruba and Fon origins travelled to the Americas with enslaved and free people. These differences play a significant role in the worship of Babalú-Ayé in the Americas today, where these ethnic and political identities are continued as the Lucumí and Arará in Cuba and as the Nago and the Jeje in Brazil. Babalú-Ayé appears in most New World manifestations of Orisha religion.
In Lucumí Santería with its origins in Cuba, Babalú-Ayé is among the most popular orishas. Syncretized by some with Saint Lazarus, and regarded as particularly miraculous, Babalú-Ayé is publicly honored with a pilgrimage on December 17, when tens of thousands of devoteess gather at the Church and Leprosorium of Saint Lazarus in El Rincón, in the outskirts of Santiago de Las Vegas, Havana Province. Arará communities in Cuba and its Diaspora honor the deity as Asojano and claim superior knowledge of his rituals. Both traditions use sack cloth in rituals to evoke his humility. The deity also appears in the Afro-Cuban religious tradition Palo Mayombe as Pata en Llaga or Kobayende. 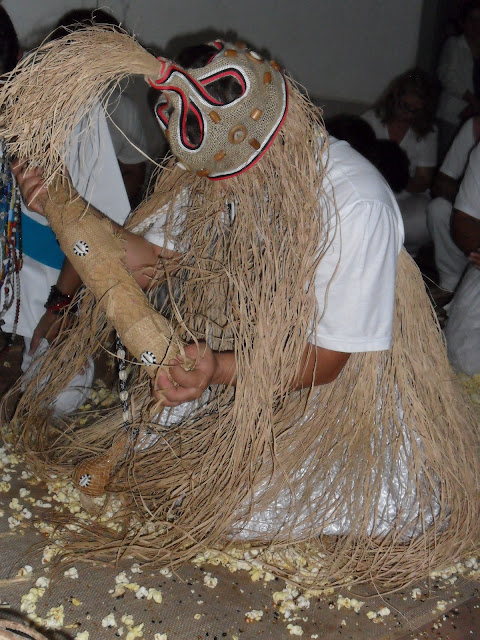 Called Omolu, “the son of the lord,” or Obaluaiyé in Brazilian Candomblé, the orisha’s face is thought to be so scarred by disease and so terrifying that he appears covered with a raffia masquerade that covers his whole body. He also manifests in other Brazilian traditions like Umbanda and Macumba.

In Ifa and Diloggun divination
Through divination, he often speaks to his devotees through the Ifá signs (Odu Ifá) Ojuani Meyi and Irete Meyi, though as a sickness, he can manifest in any divination sign. In cowrie-shell divination (Diloggun), he is also strongly also associated with the sign called Metanlá (13 cowries).

Relationship to other orisha
There are several, sometimes contradictory, accounts of Babalú-Ayé's genealogical relationships with other orisha. Babalú-Ayé is often considered the son of Yemayá and the brother of Shango. However, some traditions maintain that he is the son of Nana Burukú, a Fon deity added to the Yoruba pantheon, and associated with fresh water moving underground and inscrutable female power, but others assert that she is his wife. However, some ritual lineages maintain that Nanú, a strong, mysterious orisha, is the mother of Babalú-Ayé.
Some lineages of Candomblé relate myths that justify Babalú-Ayé being the child of both Yemaya and Nana Burukú. In these myths, Nana Burukú is Babalú-Ayé's true mother who abandons him to die of exposure on the beach where he is badly scarred by crabs. Yemaya discovers him there, takes him under her protection, nurses him back to health, and educates him in many secrets.

Because of his knowledge of the forest and the healing power of plants, Babalú-Ayé is strongly associated with Osain, the orisha of herbs. Oba Ecun (a Cuban oriate in La Regla de Ocha) describes the two orisha as two aspects of a single being, while William Bascom noted that among the Yoruba some connect the two through their mutual close relationship with the spirits of the forest called ijimere.
SOURCE:http://rastafarispeaks.com/gallery/Obaluwaye_Festival_2008/ofC2303089636