NGONDO WATER FESTIVAL OF SAWA PEOPLE: THE FESTIVAL THAT JENGU INITIATES ENTER INTO WATER FOR ONE HOUR AND RETURNS UNWET

The Ngondo is an annual water-centered festival held by the Sawa (coastal peoples) in Douala, Cameroon. Thise gathering the Sawa people takes place in the first two weeks of December on the Wouri river banks in Douala and show cases the culture of the Sawa, the country’s coastal dwellers.

"The Ngondo Festival is a way to connect with the spirits of “water Gods” and has been celebrated as an annual religious/traditional festival for countless years now. Ngondo festival begins with a number of rituals and feasts performed to celebrate and rejoice the unity of various African tribesmen who gather there for further celebrations of the event."

The most interesting thing about this festival is that one spiritual spectacle or performance undertaking by Jengu cult, that makes the event different from all other events in festivals celebrated in Cameroon. Traditionally initiated Sawa Jengu cult members are sent by Sawa chiefs as messengers to the Sawa gods in the kingdom of Miengu, said to be living in River Wouri. The initiated person dives and disappears into the big River.

He stays under the water for over an hour and emerges with his body, the traditional attire and basket as dry as if they have not gotten in touch with water. Children are not allowed to attend this ceremony as there is a serious guided secret in performance of the festival ritual As a result of the highly secretive nature with which Jengu rituals are performed the festival was banned by the Cameroonian government in 1981 and was restored in 1991.

The name "Sawa" has not always designated all people known by this name today. They once referred to themselves as "muna mboa" (Duala), mwan mboka (Mongo), man bo, mwan mba -- which generally means "native son". Usually, each clan is identified by a specific name, referring to the most common ancestor. But not all of the clans gave themselves a name. Sometimes they were named by surrounding peoples. In the case of Sawa, our fellow citizens referred to us simply as "the coastal people" -- or Duala. In reality, this term identifies only one of the many clans, which has caused frustration among those who do not belong to the Duala clan in the strict sense.

According to Cameroonian anthropologists, the Sawa are divided into two major groups: (1) Firstly, the clans of the ancient inhabitants of the region: Bakoko,,Abo, Pongo,  Bassa and the area around Douala, Edea and Yabassi... (2) Secondly, families with Manela'a Bwele as a common ancestor. They are divided into several families, including those of Mount Kupe and those of the ocean

At the end of November each year, Douala vibrates to the rhythm of the Ngondo, the great cultural festival of the Sawa. For two weeks, these Cameroonian coastal peoples celebrate the cult of water on the banks of the Wouri. The place has links with Cameroon’s colonial history as this was where the Portuguese navigator Fernando Póo landed in 1472. Amazed by the abundance of prawns, he gave the name of Río dos Camarões (‘Prawn River’ in Portuguese) to the river that later gave its name to the country.

Some thirty coastal and south-western ethnic groups participate in this festival grouping the Sawa, Tondé, Jébalé, Ewodi, Bakoko and Bassa peoples and others. It has three main parts: the immersion of the sacred vase, the election of Miss Ngondo and a pirogue race.

An emissary goes into the Wouri with the vase to seek messages sent by the water divinities, the ‘Myengu’ (sirens). When the boatmen are immersing themselves into the water to the Jengu, the boatmen and the traditional priests as well as other initiated elders undertake a wild mass cries "yai assu yai" (Come assu come) meaning assu is an alternative name for Jengu.  Once they have been brought to the surface, the people look unwet and the calabash they brought are interpreted by the ancients who meet in the sacred hut.

Sawa initiate coming out of their ritual huts during Ngondo festival

Tradition has it that the ‘Myengu’ protect their people and help them to carry out their instructions that are sources of blessings: strength, wisdom, prosperity, fertility, good fishing, good harvests, fraternity and love of one another, peace in households and throughout the country. This immersion of the sacred vase is the mystic aspect of the ceremony and the occasion for this people to communicate with their ancestors.

The spectacular and very popular final event of the Ngondo is the race between giant pirogues that can be crewed by up to 70 paddlers. It is watched by thousands of supporters gathered on the banks of the
Wouri. It also has a mystic connotation
source: http://www.trekearth.com/gallery/Africa/Cameroon/South/Littoral/Douala/photo791310.htm 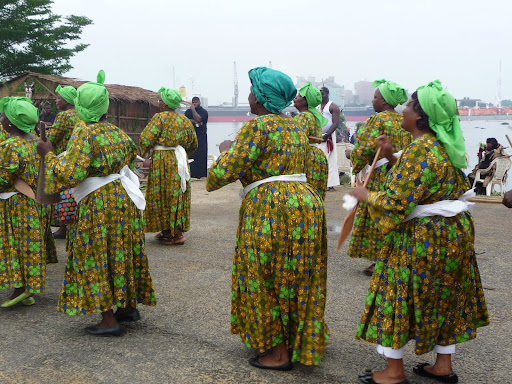