BOZO PEOPLE: THE MALIAN SONINKE FISHING PEOPLE AND "MASTERS OF THE RIVER"

The Bozo ( Boso, Sorogo, Tieyaxo Bozo) people are the expert fishery, peaceful, friendly and Soninke-speaking ethnic group  inhabiting predominantly along the Niger River in Mali. They are sometimes referred to as  the "masters of the river." The have long maintained friendly relations with the Dogon and Nono, nearby tribes.

The name Bozo is thought to derive from Bambara bo-so, 'Bamboo house'; the people accept it as referring to the whole of the ethnic group but use more specific clan names such as Sorogoye, Hain, and Tieye themselves.
As best and famous fishermen in the land-lock  nation of Mali, the Bozo especially the Tieye clan can be found along all the main rivers; from Koa to Miérou on Niger River; Diafarabié to Sendédaga on Diaka River. 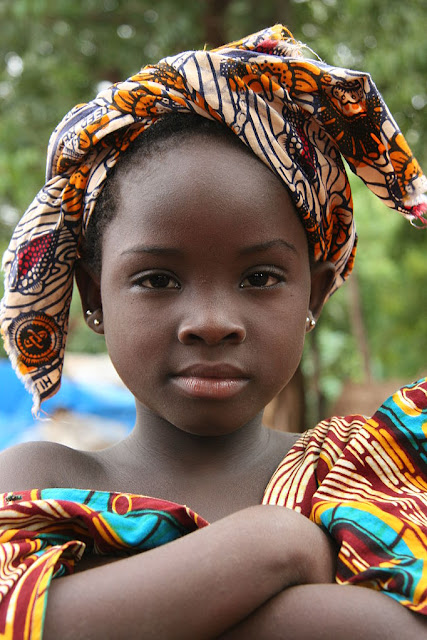 Here, they have moved temporarily onto a small island which has appeared in the middle of the river as the water level has dropped in the weeks and months following the rainy season. The Bozo people are experts in living on the waterside and making a living from fishing.

Nomad Bozo girls stuck in the reeds on Niger River near Mopti, Mali

"According to legend, the Bozo are descendants of Faro, the water spirit and creator god. They were the "First Twins" of Faro. They are seen as the inventors of the masquerade tradition in Mali.

The ancient Bozo people are credited for identifying "B" in the Sirius Eye as ". Sirius, the most important star in the Egyptian's heavens, was sometimes identified with their chief goddess Isis. Isis, as Sirius, was customarily portrayed in paintings as traveling with two companions in the same celestial boat. One companion of Isis was Osiris, the chief Egyptian god. The hieroglyph for Osiris is a throne and an eye. The Bozo tribe of Mali call Sirius B "the eye star". Since Osiris is represented by an eye and is sometimes considered the companion of Sirius, then is it plausible to say that Osiris was Sirius B, and if so, how did the Egyptians and the Bozo's know that Sirius had a companion, a small white dwarf star that was invisible to the naked eye? And who was the second companion in that mysterious celestial boat? That answer is the Faro, the water spirit and Creator God of Bozo people, if not humanity.

Rock drawings linked to the Bozo date back as far as 6,000 years, but many aspects of their current culture took shape under the 10th century Ghana Empire, when the Bozo took possession of the banks of the Niger. The Bozo were the founders of the Malian cities of Djenné and Mopti.

The Bozo people are credited for founding the City of Ségou (Seku, Segu). Segou is a city in south-central Mali, lying 235 kilometres (146 mi) northeast of Bamako on the River Niger, in the region of Ségou. The Bozo founded on a site about 10 kilometres (6.2 mi) from the present town. With 130,690 inhabitants in 2009, it is the fifth-largest city in Mali.

Capital of the Bambara Empire in the past, Ségou is now the capital of Mali’s fourth largest administrative region of Ségou. It is known also as the city of “Balanzan,” named after the local tree Acacia albida. Ségou has faced numerous conquests and changes of administration, but has always benefited from trade with nearby commercial centres such as Djenné and Timbuktu, and been an administrative center and commercial center for cereal and cattle.

Although the Bozo control the waterways in much of their region, the land is dominated by other tribes who have migrated into the town.

Location and Climate
The Bozo live mostly in the Mopti region in the interior delta, but also dispersed around Mali and other West-African countries where there are rivers and dams.

These people are migrating to Bamako in significant numbers, but perhaps with no great concentration in one place, dispersed through the city, but some along the river; as seasonal nomads along the river systems as far as Timbuktoo; to Mopti.

The climate in the Bozo area is hot and dry. Temperatures range from 73 to 97 degrees, and there is only eight to twenty inches of annual rainfall. Animal life is varied in the Bozo region. Giraffes, elephants, lions, and panthers inhabit the land, while crocodiles and hippopotamuses live in the rivers. Many birds, monkeys, and snakes also occupy the area.

Language
Bozo, the principal fishing people of Inner Niger delta in Mali speak Bozo language Bozo (sometimes Boso, 'house of straw') which belong to Niger-Congo language family. According to the 2000 census, the Bozo people number about 132,100. The Bozo dialect cluster is often considered to be one language, but there is quite a bit of diversity.

Ethnologue recognizes four languages on the basis of requirements for literacy materials. Bozo is part of the northwestern branch of the Mande languages; the closest linguistic relative is Soninke, a major language spoken in the northwestern section of southern Mali, in eastern Senegal, and in southern Mauritania. The Bozo often speak one or more regional languages such as Bamana, Maasina Fulfulde, or Western Songhay.

Portrait of of little girl from Bozo tribe,Segou in Mali. Anthony Pappone

Hainyaho, spoken by the Hain (sg. Xan), is the most western dialect, spoken in two spots along the Niger. It is most closely related to Tigemaxo, its eastern neighbour which is spoken around Diafarabé. The central and most widely spoken Bozo language is Sorogama, which actually consists of four dialects, Pondori (south of Mopti), Kotya, Korondugu (north of Mopti) and Debo (around Lake Debo). Tièma Cièwè is the northeastern most of the Bozo cluster, spoken in the vicinity of Lake Debo.

Waiting for transport over The Niger River. www.ingetjetadros.com

History
Historically, Bozo is one of the oldest people in Mali. They are the major subset of Soninke people.

Settlement
The Bozo live in small, compact villages on the banks of streams. Several different types of dwellings may be found among them. Temporary fishing camps are composed of straw huts. In the flood plains, dwellings built on artificial mounds are used. The most common type of village, however, is composed of rectangular houses with sun-dried brick walls. The roofs of these houses are flat and made of beaten dirt that is supported on logs.

Economy
Bozo people are known for their fishing expertise as well as an excellent boatmen as a result they tend to live around riverside.As the riverside nomads on the great River Niger Delta, when the river level rises in the rainy season (and it floods about 20,000 sq kilometres of land), they regularly load their homes, household goods and everything including themselves into their boats, and navigate to a new waterside site.

Here they set up their homes again, living and working until they need to move again. The Bozo fishermen annual fishing catch constitutes one of Mali's principal exports.

They also engage in some agriculture, with rice and millet as the staple crops. Corn, peanuts, onions, okra, and peppers are also grown. Market gardens produce a variety of fruits and vegetables for sale
Bozo women also engage in bakery business and other forms of commerce along the riversides.

Fishing is the responsibility of the Bozo men and boys. The women are often maintaining their fires, pounding millet for porridge, scrubbing blackened pots and re-muddling the outsides for cooking again. They can also be seen carding and spinning cotton or other chores. It is also their job to prepare the fish for selling and sell it in the market.

The women raise vegetables and tobacco, which they sell in the markets. Other agricultural work, however, is done by the men. Each Bozo village also has at least one professional hunter, who hunts hippopotamus, crocodile, and manatee.

Bozo women with their catch

Things however are changing for the Bozo as their lives are becoming more modernized. Technology is leveling the tropics - cell phones, video, CD players, television, and satellites are making a huge impact on the society. Money and goods are becoming an important commodity. There is increased accessibility by boat or road; making travel easier and more possible.

Bozo marriages are arranged by extended family heads through male intermediaries. The prospective groom gives gifts to the bride's parents and performs a bride-service. He must also pay a bride-price, but sometimes, instead of a bride-price, the two families exchange women. Polygyny (having more than one wife) is generally practiced, but only to the Muslim limit of four.
Bozo land is owned by the community as a whole and is administered by the community's headman, who lives in an interior court in the center of the village. The headman handles the affairs of the village community and is also considered the "clan chief."

Religion
Before the advent of Islam Bozo people were practicing their traditional African Religion. They were worshiping a Supreme Being and Creator God, Faro. The Bozo people who are primarily fishermen have a wonderful creation story about Faro.

The Bozo are the 'first twins' according the tradition and worship Faro the spirit of water. The ram, valued throughout this region, was sacrificed for the first time by God to redeem the errors committed by Mousso Koroni, the 'ancient little woman.' An era of disorder, violence and sterility was followed by a period of prosperity, order and peace.

The Bozo are virtually all Muslim. As such, they adhere to the five "pillars," or duties, of Islam. These include affirming that "there is no god but Allah, and Mohammed is his prophet." Muslims must also give alms generously and are expected to pray five times daily, facing the holy city of Mecca. In addition, devout Muslims fast during the holy month of Ramadan. Finally, they are expected to a make a pilgrimage to Mecca at least once during their lifetime, if at all possible.

Bozo (and Mali`s Bamana) legend of Sigi
The bush buffalo of the Mali tradition. He is the power and strength of men and adorns the tribe with his celestial horns, milk and hide. Sigi is one of the Sogow mythical animals of Mali folklore. The Bamana people believe that Sigi’s body represents the Niger river and his horns represent the canoes from which the Bozo fisherman of the Bamana people gather riches.

The Sogow are colourful animals who are characters in folkloric stories. These stories are reenacted in a masquerade where puppeteers become these mystical animals. These puppets are very large and can disguise a few people who all work to animate the animal to scare and entertain audiences. Such masquerades are popular with the Bamana tribe. The fisherman of the Bozo tribe are believed to have first create the exquisite masquerades.

Sigi is a colourful buffalo who like other Sogow has smaller puppets of yellow skinned people on his back. Puppeteers would animate the large body of Sigi whilst others would use rods to control the human shaped puppets on Sigi’s back. Sigi carries a farmer with his hoe, a millet pounding women, a Faro (creator god) and some musicians. Sigi dances very slowly allowing the puppeteers to animate the characters on his back. He has short interludes of dexterous movements followed by a few dips before returning to his slow movements in his dance. Solo singers and a choir of women and girls sing about the great power and beauty and beauty of Sigi, accompanied by drums, gourd rattles, and castanets. 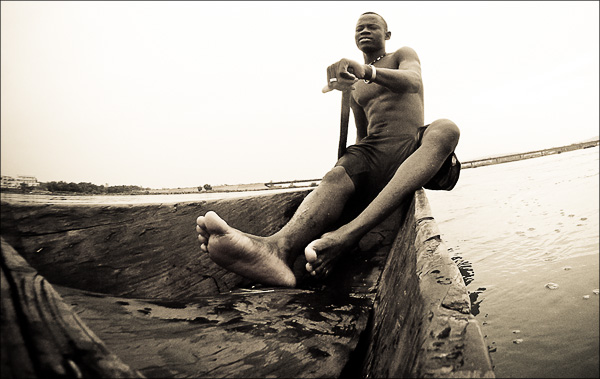 Bozo kids in the village of mopti. Nicolas Jalibert 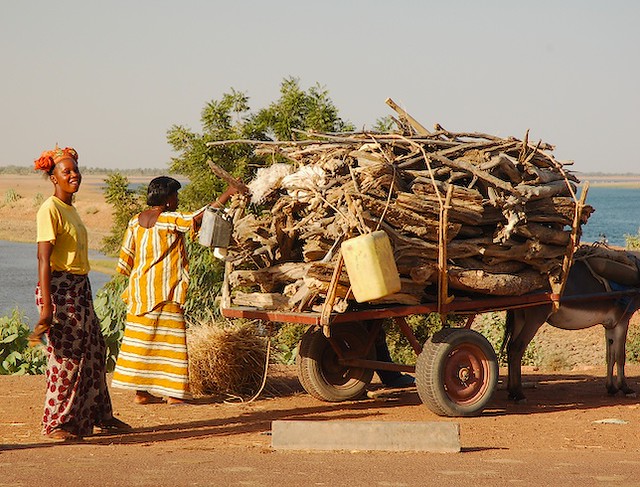