The Mundari are a small Nilotic ethnic group of larger Karo people of East Africa living in South Sudan.
The Mundari is composed of cattle-herders and agriculturalists and are part of Karo people which also includes Bari, Pojulu, Kakwa, Kuku and Nyangwara.

Mundari people are known for their tribal body or facial marks (scarification) techniques as well as traditional wrestling. The Mundari can be identified with facial tribal marks which consists of a pattern of two sets of three parallel lines, each on either side of the forehead,which extends in a downward slope but is unconnected in the middle.

Demography and Geography
The traditional Mundari tribal lands are located roughly 75 kilometers north of Juba, the capital of South Sudan, and are centered on the town of Terekeka in the state of Central Equatoria. They are bordered to the north by the Bor Dinka at Pariak and to the south by the Bari of Juba at the Ku'da River.

NILOTIC BOYS
NILOTIC BOYS: Mandari tribal boys waited by the Nile River for boats with the day’s catch to arrive in Terekeka, South Sudan, Monday. The Mandari are known for fishing with only spears and nets and for their cattle-keeping traditions. (Camille Lepage/Agence France-Presse/Getty Images

Their lands are bounded on the east by the White Nile and extend west to Lake Madi in Western Equatoria state, an area roughly 100 by 75 kilometers in size.

The land, like much of South Sudan, is predominantly flat and marked by occasional isolated large hills. The low-lying land contains many rivers and lakes and is prone to flooding during the rainy season. The soil is predominantly clay-based, causing drainage and water retention problems, and provides a very fertile basis in support of cattle grazing.

The Mundari are divided into three sections namely:
The earlier indigenous population
The Bora
The groups of immigrants into Mundari who have gradually succeeded in establishing powerful chiefdoms.
The main towns are Terekeka, Tombe and Tali.

Environment, Economy and Natural Resources
Mundari-land is wooded savannah lying on both sides of the River Nile. The western part is drained by numerous seasonal and perennial streams and becomes swampy during the rainy season.

The Mundari are ago-pastoralist and the economy is centred on subsistence agriculture and herding of livestock.

The main crops are sorghum, maize, groundnuts, simsim. The Mundari raise a considerable number of cattle, goats and sheep that are essential as mediums: connecting human beings and this world with the world of gods.


Mythology and History
Mundari have a multiplicity of origins. The original clans whose origin can not be traced mixed with the Bora who are believed to have broken off from the other Bari-speaking groups.

Society, Social Events, Attitudes, Customs and Traditions
The Mundari society is organised into agnatic exogamous lineages. A landowning lineage - varying in size from about 15 to over 50 adult males - live in a chain of hamlets with each hamlet under a family head.

A hamlet is occupied by an elder, his married sons with their dependants and as many maternal relatives who have settled with them.

The hamlets may or may not be situated contiguously to form the residential unit loosely called a village. Big Mundari villages have their own water supplies and grazing lands but small ones composed of minor lineages or small landowning clans, often share water and grazing.

The society is knit together by social events in the hamlets and in the cattle camps. While in daily tasks new ties of common residence result from mutual aid and entertainment of neighbours, the closest ties are still with the next of kin, left behind in the old hamlets (the people to whom an automatic appeal is made in time of need.)

Generosity is highly respected among the Mundari and there are sanctions that are applicable to the mean, greedy, and parsimonious who may figure in satirical songs; be teased or spurned in the girls’ courting-huts. It is believed that the grumbling and annoyance of mean people arouse will make them ill.

Unsociable behaviour in prominent elders such as habitually eating at home instead of sharing their food in the hamlet kraal, evokes criticism. The importance of sharing is emphasized in Mundari upbringing and the young learn to be generous by constantly exchanging pipes, necklaces, or bracelets, and passing on to others anything that is not immediately needed.

Political Organisation and Traditional Authority
Mundari country is divided into independent village-chiefdoms. The traditional boundaries of chiefdoms enclose important spheres of partisan loyalty, social activity and religious affiliation. Personalities whose forbearers represented the past autonomy of a group continue to wield influence even though they may lack political authority (administrative chiefs imposed by the government).

Traditionally, Mundari chief is hereditary - male line and is referred to as chief of the country (''''Mar lo jur'''' or ''''Mar lo Bay''''). There is also the chief of the meeting shade and council (''''Mar lo toket''''). The performers of rain rites and those for shea trees wield influence; so are the elders and cattle camp leaders.

The Mundari conduct religious and rituals through mediums, landowning chiefs (Monyekak), who are responsible for the well-being of their chiefdoms, and the doctors (Buniton), who are also diviners and treat sicknesses.

Culture: Arts, Music, Literature and Handicraft
The Mundari culture is oral transmitted orally in songs, many of which are satirical for correcting misdemeanour in society, dance, poems and other body expressions that reflect good, generosity, and other core values of the Mundari.

They have developed physical arts that demonstrate Mundari cultural identity. They have perfected the arts of war implements and body decorations.

Neighbours and Foreign Relations, Co-operation
The Mundari neighbour;
The Bor Dinka and Aliab Dinka to the north and northwest
The Moro, Nyangwara to the west and southwest

The Bari to the south
The relationship with the Bor Dinka has not been very cordial due to competition over cattle. The Mundari have little problems with the Bari and with the Moro.

Latest Developments
The war and particularly the incursion of the SPLA into Mundari land in early 1980s wrought havoc and caused much suffering to the Mundari prompting their alliance with the government.

Most of the Mundari were forced to leave their villages and flock to the towns like Juba, Terekeka.

Diaspora
The Mundari are land – locked and their initial conflict with the SPLA never gave opportunity to have a Mundari Diaspora.

Sudan, Mundari, 'Agar Dinka Woman Decorated With Dust, Holding Young Son In Her Arms And Laughing. Woman Wearing Marriage Beads Around Her Neck And White Ivory Bracelet On Her Arm.'

Among the Mundari, both females and males, at least traditionally, will have the owl wing shaped scarification, for no more than beautification reasons, though other forehead scars (vertical slits) will have resulted as a traditional treatment for headaches (which probably correlates with malaria). Sometimes, scars can be cut all over the body for decorative purposes. In other communities, with different patterns, they can stem from "initiation" practices (turning into a man)

Tarakeka, South SudanBruno Zanzottera Young ethnicity Mundari over a termite nest along the banks of the Nile, near the village of Tarakeka. Semi-nomadic herders, the Mundari are a Nilotic tribe of the various ethnic groups who move with their herds along the big river, with the annual flooding after the rainy season, contributes crucially to the sustenance of the herds. 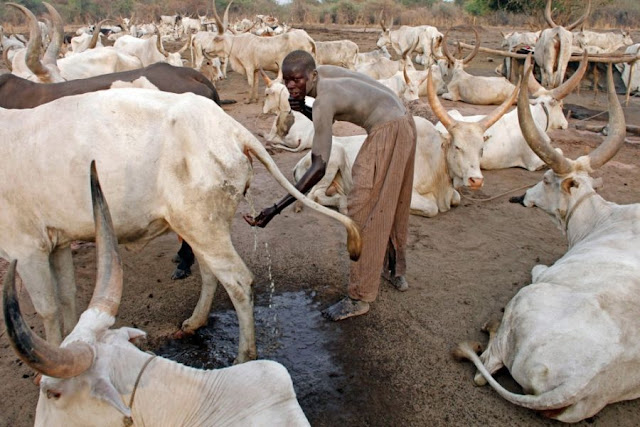