TOPNAAR PEOPLE: THE NAMA-KHOIKHOI PEOPLE ON THE TOP FAMOUSLY KNOWN FOR THEIR !NARA MELON

The Topnaar people are nomadic, cattle-herders and aboriginal Khoikhoi-speaking ethnic group belonging to the Nama, who for their part, also belong to the larger Khoi-Khoi (Hottentots) ethnic group. Topnaar live in the Central Namid in the lower Kuiseb valley along Kuiseb river in the area around the Walvis Bay in the Erongo Region of Namibia.

The Khoi-Khoi were called Hottentots by the first European colonizers, probably because of their language Nama, a "click" language. The four clicks used in Nama are I a "dental click", il a "lateral click", ! a "palatal click" and =t= a "alveolar click". The Khoi-Khoi, translated as 'men of men', were previously more widely dispersed in southern Africa.

At present Khoi-Khoi tribes are only found in Namibia where they consist of 3 groups: the Nama, the Oorlam and a number of San groups.
The Nama are divided into 9 tribes, two of which are the Topnaar of the lower Kuiseb valley and the Topnaar of Sesfontein. The name Topnaar is of Dutch origin, meaning 'people of the upperland' or 'those who are on top'. This is probably a translation of the traditional Nama name Aonin.

The Topnaar tribe is divided into sibs (clans) and the tribal government consists of a chief and his council. In the past the leadership was inheritable, but now also the people have a say in the elections of a new chief. 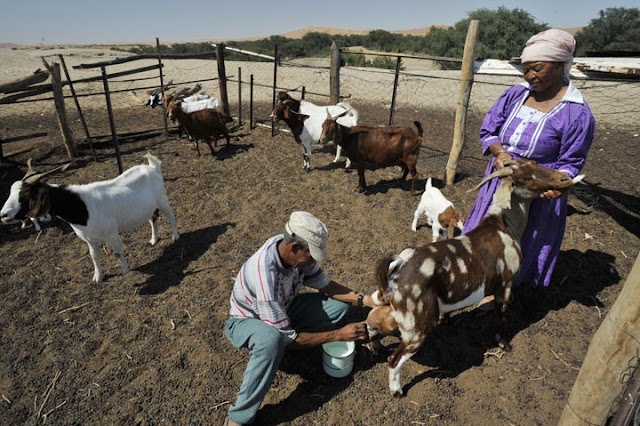 History
The Topnaar are among the oldest inhabitants of Namibia. Their history is not completely known. The earliest recorded presence of Topnaar in the Walvisbay area goes back to 1670 when the Dutch East India Company's ship, Grundel, first entered Sandwich Harbour, just south of Walvisbay. 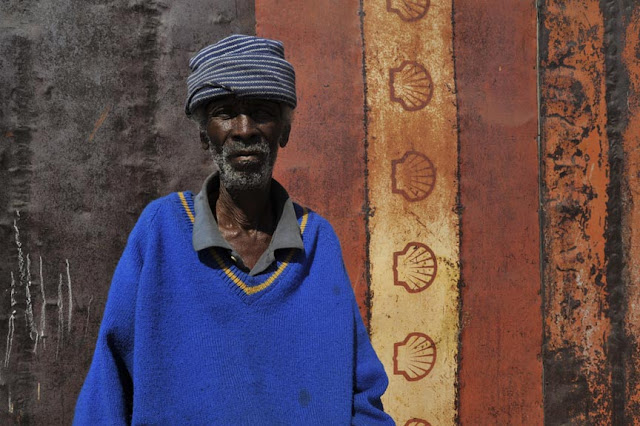 An elder from the Topnaar Community in Namibia's Namib Desert.

The natives on the shore were recognized as Hottentots by the crew, but their language was noted to be slightly different to that of the Cape Hottentots (who were known from the first voyages of the Dutch East India Company to South Africa). At that time the Kuiseb still reached the sea at Sandwich Harbour. Seven years later, in 1677, the Dutch East India Company vessel Boode visited Sandwich Harbour and met Hottentots, which were herding cattle and collecting Inara seeds.
In 1973, Dr. Beatrice Sandelowsky discovered near Conception Bay some fragments of a Khoi clay pot, which were dated approximately 650 years back. This probably means that Khoi-Khoin were already living along the Namibian coast in the 14th century. It is not sure, however, whether these people were Topnaar people or belonged to another tribe.

According to oral tradition, the Topnaar came from the north prior to occupying the Walvisbay territory. The exact area were they came from was however not further specified.
The Topnaar were among the first traders in Namibia. As early as 1677 they bartered with European sailors beef, goats, milk, Inara and fresh water in exchange for general supplies, clothes, weapons and alcohol.
A long time ago, the Topnaars' territory was more extensive and reached from the coast, eastwards along the lower Kuiseb as far as !Hu-daob, and from Conception Bay in the south northwards to the Swakop river (BUDACK, 1 9 7 7 ; KÖHLER, 1 9 6 9). They were driven from part of this area by
the Herero migrating from the north and other Nama people migrating from the south.

There exist different opinions about how some Topnaar people migrated to Sesfontein, about 500 km north of the Kuiseb in the Kaokoveld. HOERNLÉ (1925) says the Topnaar told her that some of them returned to the north after having settled in the Walvisbay area. Other sources (KÖHLER 1969; Kooitjie, personal comment) say that in the 1880's, during the wars between the Nama and Herero, a group of Topnaar joined Jan Jonker Afrikaner, headman of the Afrikaners, to fight the Herero, and thereafter remained in the north, in a place called Am-eib. Forced by drought they moved afterwards to Sesfontein, where at that moment already lived some other African tribes, Bushmen and Bergdama. Another group of Nama people, the Swartboois, followed them later.

Way of Life in the Lower Kuiseb Valley
The Topnaar of the lower Kuiseb valley traditionally live by herding cattle, gardening, and gathering the Inara (Acantfiosicyos horndus). The latter is a cucurbit which grows in the wild. It is endemic to the coast of Namibia and provides food and water to the Topnaar. The Topnaar are therefore also called INaranin, people living off the Inara. This however is a derogatory name to them as it stresses their dependency on "veldkos" (literally food from the field, referring to the use of indigenous edible plants for food).

The Inara grows abundantly in the sand dunes near Walvisbay. Each family possesses a number of Inara bushes. In this the Topnaar differ from the other Khoi-Khoi: the Inara bushes, not the land on which they grow, are private property, whereas normally possessions are common. This perpetual right to the Inaras was approved by Queen Victoria herself. Each family can only harvest from its own Inara bushes. The property rights are hereditary. If the parents die, the Inara field is divided over the children that are interested in the Inara. The chief and his council may rule in disputes if necessary. During the harvesting season of the Inara, whole families move down to the coastal Inara fields and remain there until the end of the harvest. Only a few people stay behind in the villages to attend livestock.

In the past, the Topnaar of the Kuiseb area were split up into Hurinin, the hunther-gatherers and fishermen living along the coast, and INaranin, those living more inland along the Kuiseb river. The latter were the dominant group. Now they have fused. Furthermore these Topnaar have also fused with some Herero, Ovambo, Damara and Eurafricans living in the same area.

Way of Life in Sesfontein
The Topnaar of Sesfontein are also called IGomen, "stupid people", speaking a strange, unintelligible dialect (KÖHLER., 1969 ) . In 1906, the farm Sesfontein, so called because of the six perennial springs issuing in the area, was granted to the Topnaar and Swartboois by the German Government. Due to these springs, which provide water to this area, irrigated agriculture is possible in Sesfontein. Every male inhabitant owns a part of the irrigated fields. The major crops are wheat, corn and tobacco. Gathering of wild food plants is still important to these people as well as some goat farming.
About 100 Topnaar presently live in Sesfontein. The earliest chief the Sesfontein Topnaar can remember was \Uichah. Under him they still lived in the south. Only during the leadership of his son, Anibab Hendrik \Uichamab, did the Topnaar actually come to Sesfontein.

The Khoi-Khoi are traditionally nomadic. The Kuiseb Topnaars' mobility, however, is restricted by the environmental conditions of the area: the people depend on the waterholes in the riverbed and the Inara fields. Another drastic influence on their mobility and general way of living is the fact that in 1907 a large area of the Namib desert was declared a National Park. This ruling prevents hunting and prohibits the herding of livestock or any other activity outside the riverbed.
Following implementation of the South African Odendaalplan (the aim of this plan was to return all black people in South Africa and South West Africa (now Namibia) to their respective homelands), some farms were purchased further south, in Namaland, with the intention to move and resettle the Topnaar outside the Namib-Naukluft park. They refused, however, to leave their territory, which they claim as their traditional tribal area as they have already occupied it for several centuries. Their culture
is linked to the Inara and they depend on the sea and its food resources.
There also exist legal treaties respecting their traditional rights to the use ofthe Inara plants.
For years the presence of the Topnaar in the Namib-Naukluft park was a topic of dispute between the Ministery of Wildlife, Conservation and Tourism and the Topnaar people. A result of this was that under South African rule, few investments in the development of the area were made. Only in 1979 did
the Department of Water Affairs improve the water supply in the villages by building wind-pumps, dams, pipelines and water-taps.

The first known chief of the Kuiseb Topnaar was Frederik Khaxab (mid19th century). After his death Piet II Eibib became chief of the Topnaar. When he died in 1910, leaving no son, two fractions struggled for the leadership, but without result. For 66 years the Topnaar had no leader. This resulted in the loss of some of their traditions, culture and tribal unity. Only in 1976, when Namibian independence became a possibility, did the need for a Topnaar spokesman at national level emerge. A new leader, chief Esau Kooitjie was nominated. On his retirement in 1981, his 18 year old son Seth
Kooitjie was elected his successor. Since then the Topnaar have again had someone to represent them and promote their interests on a national level.

At the time of this research about 400 Topnaar lived along the Kuiseb river, divided over 12 semi-permanent settlements, all located on the northern bank of the river, far enough from the river so that the occasional floods will not destroy the houses. The villages, from east to west, are Homeb, Oswater,
Natab, Gobabeb, Soutrivier, Klipneus, Swartbank, Eduseb, Ururas, Goatanab, Dawe-draais and Armstraat. The 4 last villages belong to the Walvisbay-enclave (still belonging to the Republic of South Africa