Princess Yennenga, also known as Yennenga the Svelte, was a legendary African princess, considered the mother of the Mossi Mole-Dagbani people of Burkina Faso. She was a famous horse-riding warrior whose son Ouedraogo founded the Mossi Kingdoms.  The origin of the "Land of Honest Men," the meaning of Burkina Faso is entrenched in the history of Princess Yennenga. The stallion, princess` own power animal became an important symbol in the country and it symbolizes her passion, personal drive and appetite for power. 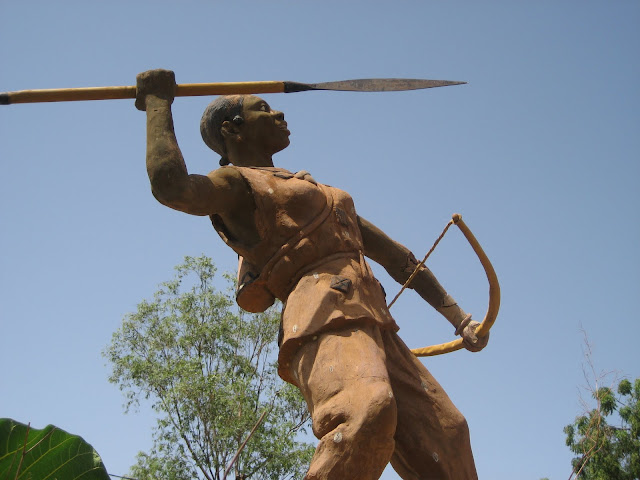 Princess Yennenga (12th century) was the female warrior considered to be the mother of the Mossi Kingdom.By Brenda Gael McSweeney

Yennenga was the only daughter of  the progenitor of the four Mole-Dagbani ethnic groups, Na Gbewa also known as Nedega. Na Gbewa or Nedega became the early 12th century king of a Kingdom at Pusiga in the northern region of Ghana. Na Gbewa`s three sons all founded powerful kingdoms. The first son, Tohagu founded the Mamprusi kingdom, the second son, Sitobu founded the Dagomba kingdom and the other son founded Nanumba kingdom, all in the northern region of Ghana. It is no surprise that Na Gbewa`s only daughters` son Ouedraogo following her mother, Yennenga`s, warrior prowess also founded the most powerful Mossi kingdom of the ethnic Mossi people in Burkina Faso. 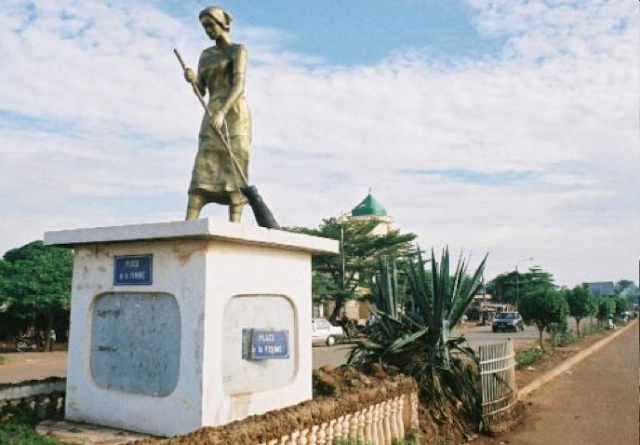 Statue of Princess Yennenga at Bobo Dioulasso in Burkina Faso

Yennenga the only daughter of Na Gbewa was said to very beautiful (as all Mole-Dagbani women are, even today) and beloved princess who from the age of 14, fought in battle for her father against the neighbouring Malinkés. She was very brave woman, with uncommon skills with javelins, spears and bows, an excellent horsewoman who rode horses much better than his brothers and commanded her own battalion at a tender age. Yennenga was such an important fighter that when she reached a marriageable age, her father refused to choose a husband for her or allow her to marry. To express her unhappiness to her father, Yennenga planted a field of wheat. When the crop grew, she let it rot. She would not harvest it. Her father was very surprised and asked her for an explanation. "You see father", she said, "you are letting me rot like the wheat in this field". King Nedega was very upset, unmoved this gesture and ordered that she be locked up.

But Yennenga had friends among the King's (Na Gbewa) guards. One night, one of the king’s horsemen helped Yennenga, dressed as a man, escape on her stallion. Both rode long into the night and were later attacked by Malinké warriors. Yennenga and her benefactor routed their attackers but the horseman paid for the victory with his life. Yennenga was now alone in the middle of the forest, far, far away from Gambaga.
Bravely she continued to ride further north. At one point in the journey she had to cross a river. After using her stallion to withstand the strong currents and negotiating through the river she became exhausted. She rode slowly into a forest and lay on the back of her horse. It was at this juncture that Yennenga’met a famous solitary elephant hunter called Riale. When he saw through Yennenga’s disguise, they fell in love straight away. They got married; in time Yennenga and Riale had a son who came to be called Ouedraogo, which means "Male Horse" or “stallion” and is now a common name in Burkina Faso. Ouedraogo founded the Mossi Kingdom.
Yennenga is considered by the Mossi to be the mother of their empire and many statues of her can be found in the capital city of Burkina Faso, Ouagadougou. A statue of a golden stallion, called the Étalon de Yennenga, is awarded as the first prize in the biennial Panafrican Film and Television Festival of Ouagadougou. Burkina Faso's most celebrated film makers, Idrissa Ouedraogo, who won the Yennenga prize in 1991 with a film called "Tilai" had the Golden stallion. The national football team is nicknamed “Les Étalons” (“the Stallions”) in reference to Yennenga’s stallion.

Painting of Princess Yennega. Yennenga, A legendary princess, considered the mother of the Mossi people of Burkina Faso. Skilled with javelins, spears and bows, she was an excellent horsewoman and commanded her own battalion.Yennenga was such an important fighter that her father refused to allow her to marry.
Source:http://www.bbc.co.uk/worldservice/africa/features/fespaco/stallion.shtml
http://moledagbon.blogspot.com/p/history.html
http://equalityburkina.blogspot.com/2011_12_01_archive.html