Ras Prince Monolulu (26 October 1881 - 14 February 1965) was a horse-racing tipster,fashion impressario and something of an institution on the British racing scene from the 1920s until the time of his death.  He was particularly noticeable for his brightly coloured clothing; as a tipster, one of his best known phrases was the cry "I GOTTA HORSE!", which was subsequently the title of his memoirs. 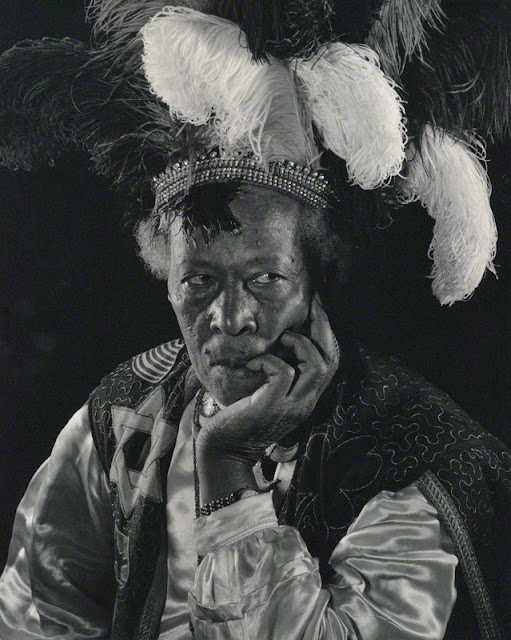 
Ras Pince Monolulu whose real name is Peter Carl MacKay claimed to have been born in Addis Ababa, Abyssinia, to a chieftain of a Jewish tribe (the truth being that he was born on the island of St Croix, then a Danish colony in the Virgin Islands, the son of William Henry McKay, a shipbuilder). Following being shipwrecked on the Portuguese coast, en route to Africa, he made his way to New York and took a variety of jobs ashore, besides making his ‘Abyssinian’ costume of an embroidered silk jacket and baggy pantaloons, in which he was to dress in England. He then worked his passage on the cattle boat Minnetonka to Tilbury in 1902. "He arrived in Britain in 1902 and after a year of mostly menial work he managed to join the chorus of the first all-black West End musical show called In Dahomey." 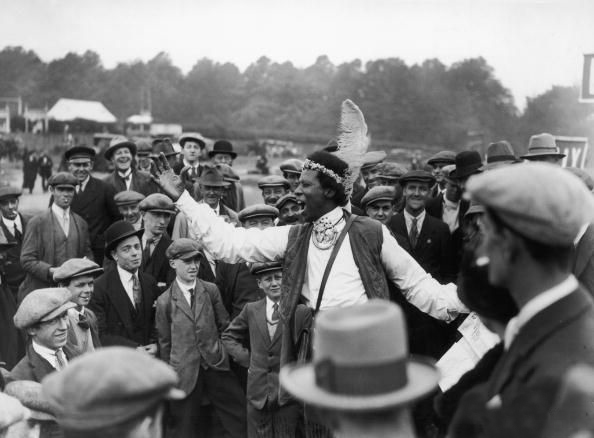 Prince Monolulu at the Epsom races in 1927

In Dahomey was initially staged on Broadway to limited success and after just 53 performances it was transferred to London’s Shaftesbury Theatre. The British public had literally seen nothing like it and the show became a huge sensation. The success was capped by a command performance celebrating the birthday of the Prince of Wales at Buckingham Palace, where it was heralded as “the most popular musical show in London.”
The musical featured an elaborate version of the African-American minstrel dance called the ‘Cakewalk’ and featured several hit songs as well as making stars in London of the principal actors. 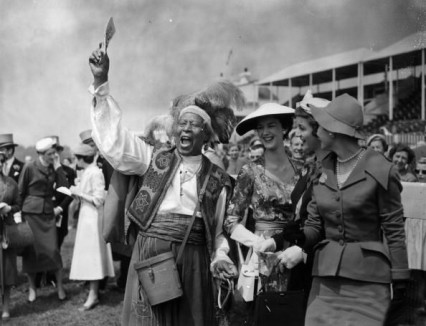 After In Dahomey came to an end there wasn’t much work for black musical actors in London (to say the least) and Monolulu travelled Europe as a fortune teller, violinist, singer, lion tamer and even a ‘cannibal’ in a travelling roadshow. He was in Germany when the first world war broke out and he found himself in a German Internment camp called Ruhleben (which, incidentally was a former race course) near Berlin for the duration of the war.
Moreover, as ‘Prince Monolulu’ (a manufactured title) and in his remarkable attire, he encountered less colour prejudice in London than he might have done. He began work for an Irish tipster but quickly went solo and took to shouting “I gotta horse” after seeing the religious revivalist Gypsy Daniels shouting “I’ve got heaven” to attract his crowds. 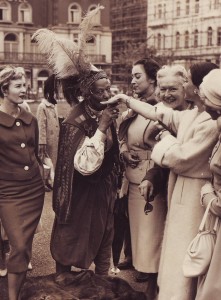 
In 1920 Monolulu reputedly won £8,000 on the Derby when he put all his money on an unfancied horse called Spion Kop. It was a vast sum of money at the time and from that moment on he became a tipster for ever more. When anyone bought a tip from him (at Epsom at the height of his fame he would charge ten shillings) he’d hand over a sealed envelope inside of which was the name of the horse written with careful handwriting on a piece of paper. He’d lean over to the punter and whisper:
“If you tell anyone, the horse will lose”.
It seemed that someone always told someone because Monolulu’s horse nearly always lost. Although no one ever complained. 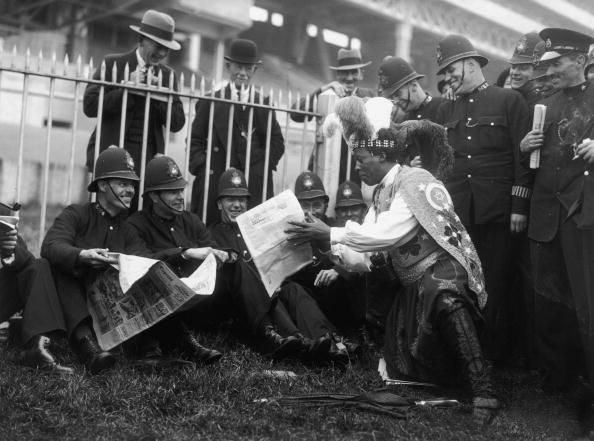 From the 1930s any British film that featured a race course would include Monolulu playing himself. Eventually he appeared in over ten films including  two films, Derby Day (1952) and Make Mine a Million (1959) with his last appearance being in a Billy Fury vehicle called, fittingly, I’ve Gotta Horse. It has been claimed that, unless the American actor Paul Robeson was visiting the country, Monolulu was the most famous black man in Britain. 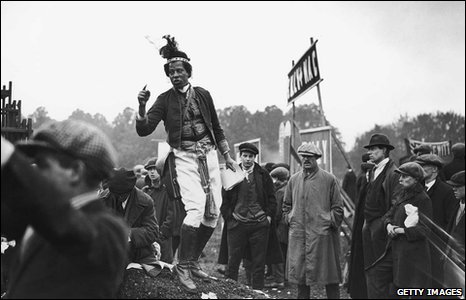 Ras Prince Monolulu given racing tips at the Epsom Derby, 1923.He told them that he was from Ethiopia and the crowd believed it.

According to his own testimony, Monolulu married six times though only three marriages are documented. His biographer, Anita McConnell, has attempted to document these.  Monolulu claimed his first marriage took place in 1902 in a Moscow Jewish ceremony and this was followed by a marriage to a German girl in a Catholic ceremony. He claimed that he then met another German girl, whom he brought to England and married in 1908 at Lambeth, this wife dying in 1911. 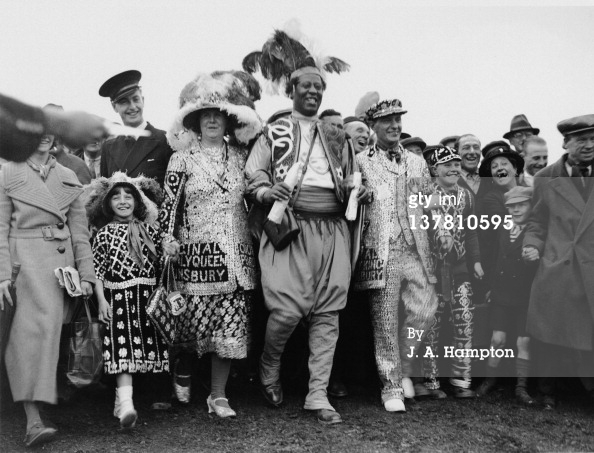 Racing tipster Ras Prince Monolulu (1881 - 1965) with a Pearly family from London during the Epsom Derby in Surrey, May 1936. (Photo by J. A. Hampton/Topical Press Agency/Getty Images)
A further verifiable marriage occurred in 1922 at St Martin’s register office, London, to Rhoda Mary but was dissolved in April 1929. He next married, at St Pancras register office on 21 August 1931, Nellie Amelia (b. 1908/9) of Edmonton, the daughter of Edward Adkins, a helmet maker. It was this interracial marriage and wedding that attracted much more widespread publicity than the others as Monolulu was now well known and photographs appeared in the national press: the picture shown of the newly married couple is from an original in the National Portrait Gallery. This marriage also broke down and there were further romantic liaisons in the 1950s. Monolulu’s colourful personality brought him many appearances on the radio and TV and, when he arrived in New York in 1951 for the fight between Ray Robinson and Randolph Turpin, the New York Times described him as ‘this 6-ft Ethiopian in his plumes and red jacket adorned with green shamrock, star of David … round his neck a lion’s claw, a real horseshoe, and binoculars’. 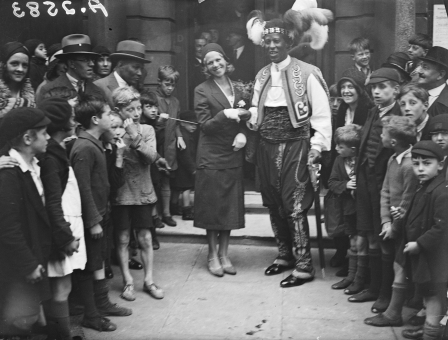 Peter Carl MacKay, aka Ras Prince Monolulu, from St Croix in the Virgin Islands, married Nellie Adkin, from Edmonton, London, at St Pancras register office on 21 August 1931. His wedding attracted widespread attention, with photographs of the couple exiting the ceremony appearing in the national press. 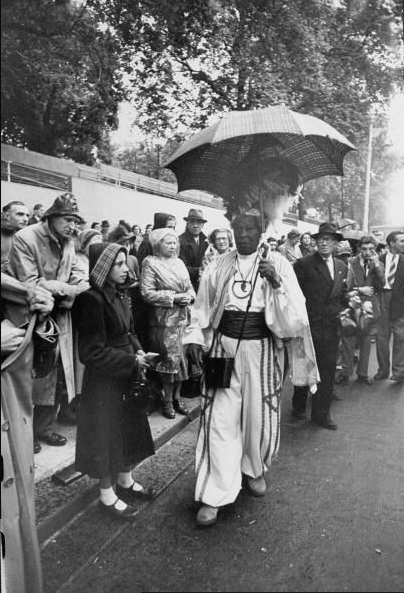 Monolulu at the Queen's coronation 1953

On Valentine’s day in 1965 Jeffrey Bernard, who was working as a racing journalist at the time, visited an ill Monolulu in Middlesex hospital wanting an interview. Bernard had brought with him a box of Black Magic chocolates and offered the famous tipster a ‘strawberry cream’. Unfortunately, Monolulu started to fatally choke on the chocolate. Bernard backed out of the ward bidding farewell. 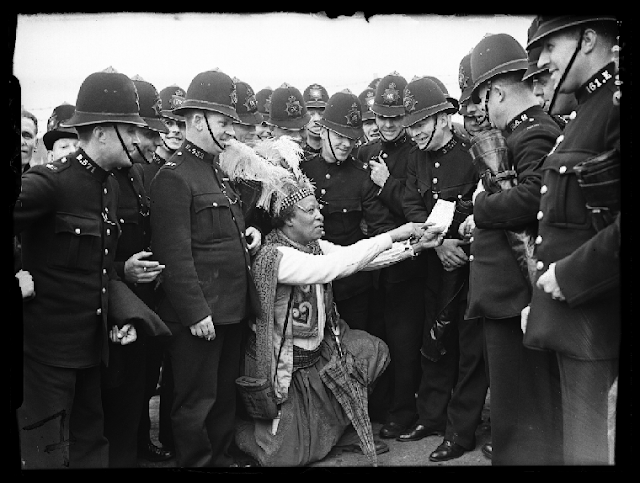 A photograph of Prince Monolulu, a tipster at the Epsom Derby, telling a crowd of policemen his pick of the racecard, taken in June 1938 by Edward G Malindine and Saidman for the Daily Herald.

Monolulu lived for a lot of his life in Fitzrovia and there was once a pub named after him called Prince Monolulu at 28 Maple Street. Unfortunately a few years ago someone decided that a three-level cocktail bar called Potion was a much better idea. 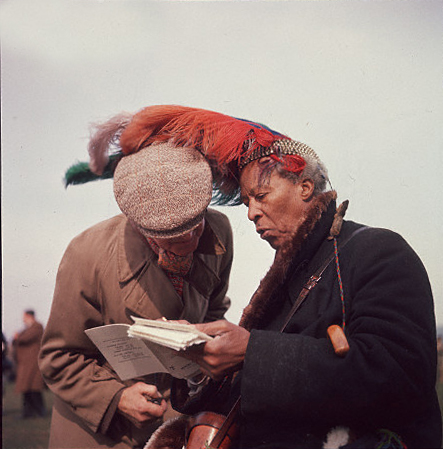 Journalist Tony Morris, who has been writing about racing for nearly 50 years, met Monolulu as a child, being bold enough to ask for an autograph.
"The famous story about Monolulu is that in 1958 he was very caught up in the deeds to Ballymoss who had won just about everything there was to win in Europe," said Tony.
"He went to America for the Washington International and apparently lost every penny he had backing Ballymoss who could only finish third.
"But, as always he bounced back."
Pip Granger’s Up West: Voices from the Streets of Post-War London (2009) notes that Soho Square was ‘a playground and a creche for the local children, sometimes under the watchful eye of the flamboyant tipster Prince Monolulu’ and that he was ‘an imposing, but friendly, figure’. ‘He kept a benevolent eye on the local kids for their busy parents’, not charging, and held court from ‘his bench in Soho Square’.

“The African prince Monolulu would come to the end of Berwick Street, giving advice to the adults on horse-betting and, giving feathers for the kids.” 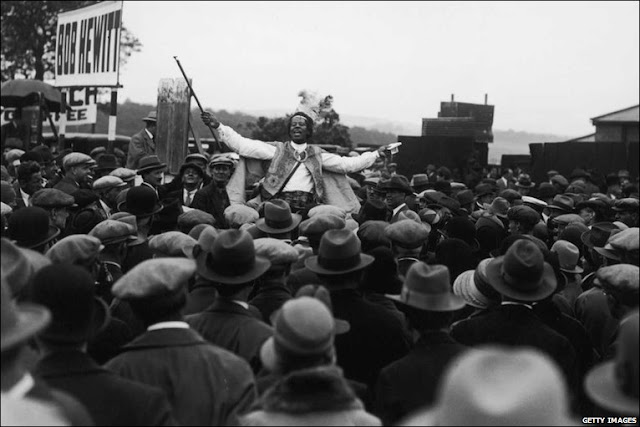 The Prince draws a crowd at an unidentified racecourse in 1927 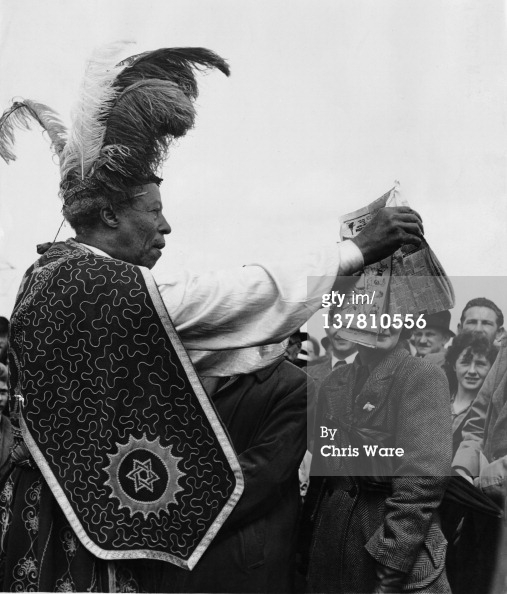 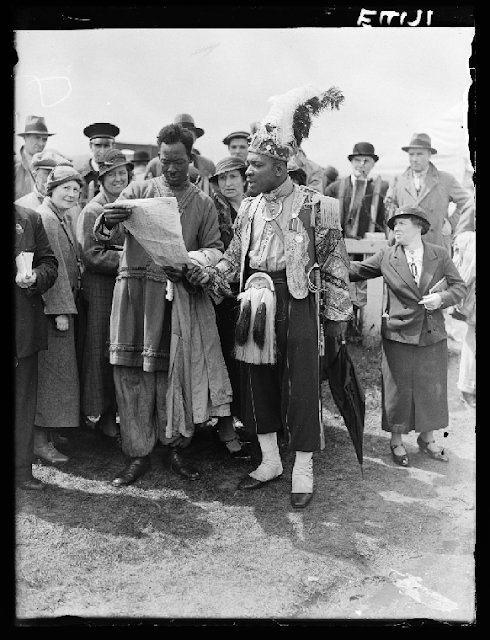 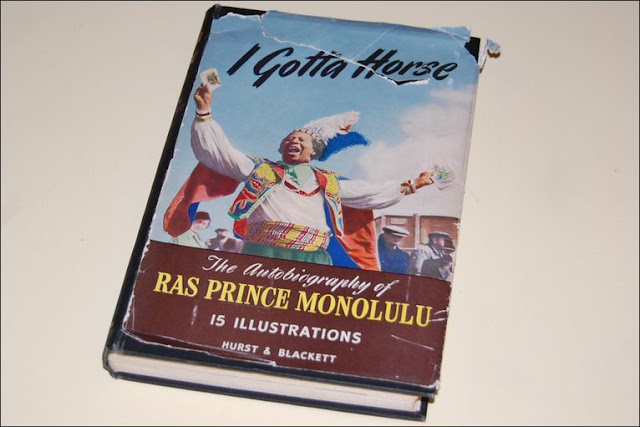 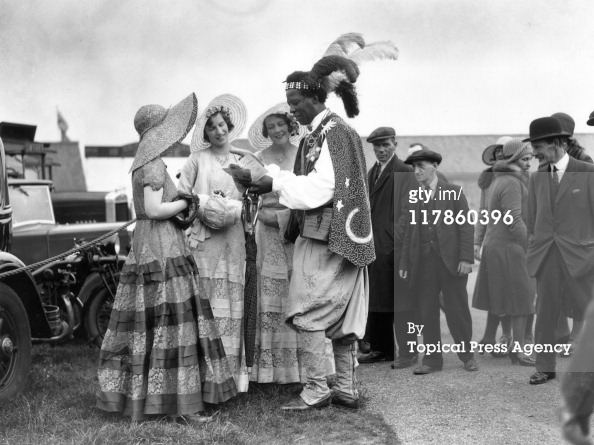 Ras Prince Monolulu (real name Peter Carl Mackay, 1881-1965), racing tipster, dressed in tribal robes as he talks to a group of ladies during the Derby meeting at Epsom racecourse, in Epsom, Surrey, England, United Kingdom, in June 1931. Monolulu claimed to be a chief of the Falasha tribe of Abyssinia, although the reality was that he originated from the Caribbean island of St Croix. (Photo by Topical Press Agency/Hulton Archive/Getty Images)