QUEEN ANNA NZINGHA: THE FEARLESS AFRICAN AND ANGOLAN QUEEN WHO DEFENDED HER PEOPLE AGAINST SLAVERY


Queen Anna Nzinga (circa 1581--1663) one of the great women rulers of Africa. She is also known as Ana de Sousa Nzingha Mbande and was a 17th century queen (muchino a muhatu) of the Ndongo and Matamba Kingdoms of the Mbundu people in southwestern Africa-Angola (Ngola was both a name and a title in Ndongo). Ndola Nzingha fought against the slave trade and European influence in the seventeenth century. Known for being an astute diplomat and visionary military leader, she resisted Portuguese invasion and slave raids for 30 years. A skilled negotiator, she allied herself with the Dutch and pitted them against the Portuguese in an effort to wrest free of Portuguese domination. She fought for a free Angola until her death at age 82, after which weak rulers left the country open for the Portuguese to regain control. 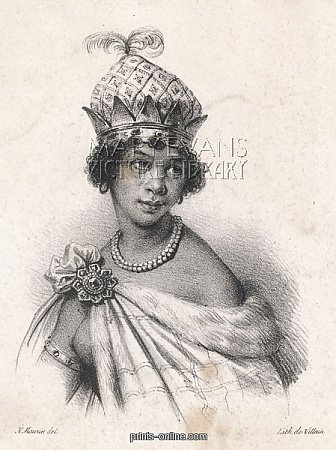 Negotiated with Portuguese Slave Traders
In the late sixteenth century and early seventeenth century, Europeans were negotiating interests in the African slave trade. The Portuguese wanted slaves for their new colony in Brazil. Threatened by English and French interests in northeast Africa, the Portuguese moved their slave-trading activities further south to what is today the region of Congo and Angola. The name Angola comes from the Mbundu word ngola, or king. 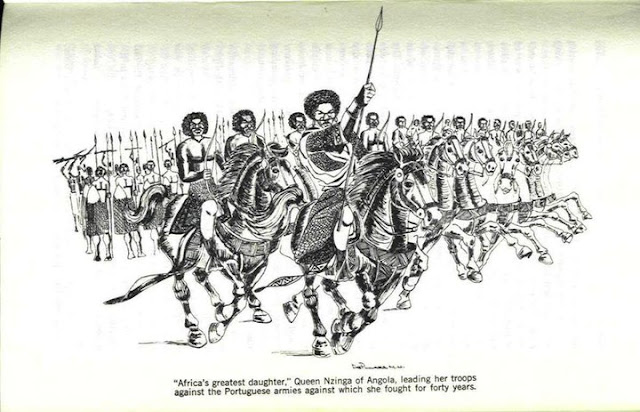 Sketch of the Queens ride to battle against the Portuguese

Early Childhood
Nzinga was born to Ngola Kiluanji Kia Samba sometime around 1581 in the kingdom of the Ndongo, a Mbundu-speaking people in southeastern Africa. According to tradition, she was named Nzingha because her umbilical cord was wrapped around her neck (the Kimbundu verb kujinga means to twist or turn). It was said to be an indication that the person who had this characteristic would be proud and haughty, and a wise woman told her mother that Nzingha will become queen one day. According to her recollections later in life, she was greatly favoured by her father, who allowed her to witness as he governed his kingdom, and who carried her with him to war.

The king had accepted limited slave trading with the Portuguese, but when the Portuguese pushed further into the country and broke boundaries set up by the king, Ndongo went to war against the Portuguese.

King Kiluanji had become a powerful and oppressive ruler, losing the support of his people and his family. In 1618, Nzinga's brother, Mbandi, overthrew and killed Kiluanji, taking the throne for himself. Just as ineffective a leader and cruel as his father, Mbandi ordered the murder of Nzinga's son in an effort to eliminate any threat to his power. The kingdom broke apart as Mbandi fled the capital and Nzinga sought refuge in the nearby state of Matamba.

Nzinga soon had the chance to show her emerging skills as a negotiator. In an effort to restore peace, the Portuguese initiated talks with Ndongo in 1622. Nzinga was sent as Mbandi's representative to negotiate with the Portuguese governor, Corrêa de Souza, based in Luanda. She arrived resplendent in her royal clothes and retinue. A Dutch artist recorded the historical meeting in a sketch. The story is that only one chair was available at the conference---the governor's chair---a ploy to make Nzinga stand and therefore seem inferior. Nevertheless, Nzinga signaled to one of her maids who fell on her hands and knees to provide a seat for Nzinga. Now facing the governor on his level, Nzinga was able to talk to the Portuguese governor as equals.  Outwitted from the start, Treaty negotiations were successful; Nzinga convinced the Portuguese to recognize Ndongo as an independent monarchy, while agreeing to release European captives taken by her brother. 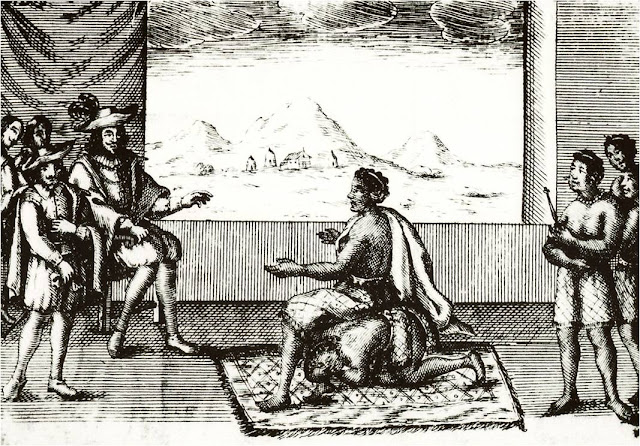 An illustration of the meeting in 1622 between Queen Nzinga of Ndongo and the Portugese governor in Luanda, from a Dutch engraving of the time

Perhaps as more of a political move than a religious conversion, Nzinga let herself be baptized by the Catholic Church and took the Christian name Dona Anna de Souza, after the name of the governor. Using religion as a political tool, she reasoned that this would open her country to European missionaries and advanced science and technology. In 1623, she was named Governor of Luanda for the Portuguese and held the position until 1626.
Only a year after the treaty was signed, the Portuguese disregarded the terms of the treaty and resumed their slave-gathering activities. Mbandi was proving to be a weak leader. Desperately wanting to defend Ndongo and her people, Nzinga poisoned her brother and succeeded him as queen of the Ndongo kingdom in 1623.

Nzinga as Queen
An intelligent and visionary political leader, Nzinga declared all the territory of Angola a free country. She offered refuge to escaped slaves, allied herself with Dutch traders who competed against the Portuguese, and dared to encourage revolt among Africans against the Portuguese. However, when negotiations with a series of Portuguese governors failed, the Portuguese attacked, eventually deposing Nzinga and forcing her to escape to the land of the Matamba.
In 1626, the Portuguese replaced Nzinga with a puppet Ndongo ruler named Philip, who was more likely to comply with European demands. Assessing her strategy, Nzinga formed an alliance with the Imbangala or Jaga group, going so far as to marry their chief. With the Jaga behind her, Nzinga conquered the Matamba people in 1630, established the state of Matamba, and declared herself their queen. Soon though, even the Jaga chief betrayed her by attacking Matamba.
Nzinga organized a resistance army using mercenaries and Africans the Portuguese had trained. Despite being in exile, Nzinga was able to influence her people and command their respect. She hand selected soldiers who pretended to be defectors so they could infiltrate the Portuguese armies. Once inside Portuguese ranks, they attacked. This show of loyalty to Nzinga made black troops under Portuguese domination desert to the queen. Always encouraging rebellion, Nzinga had, by 1635, developed an effective anti-Portuguese coalition that virtually held the Europeans at bay for 30 years. She has been called the greatest military strategist ever to confront the armed forces of Portugal. 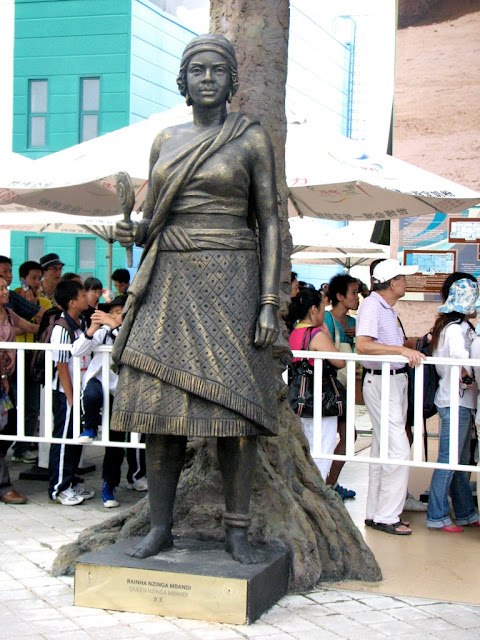 While Nzinga was sending ambassadors to west and central Africa to enlist fighters, she was also pursuing good relations with the Dutch, from 1641 through 1648, to help her stop Portuguese advancement, to control the slave routes, and to reclaim Ndongo. This strange alliance with the Dutch marked the first African-European alliance against another European aggressor. She was not above forming alliances with foreign powers and then pitting them against each other, all for the goal of creating an Angola free of European influence.
A setback occurred in 1648 when Portuguese reinforcements arrived from the colony of Brazil who proved to be a formidable force. The Dutch were expelled from Luanda, leaving Nzinga without her most powerful ally. Unwilling to admit defeat, Nzinga resumed peace talks with the Portuguese for the next six years. Although the Portuguese at this time were contained, it became clear that they would not be removed. Nzinga was forced to recognize Philip as king and Portugal's sovereignty over Ndongo. Nevertheless, Nzinga remained queen of independent Matamba until her death in 1663 at the age of 82.

A Dynamic Ruler
A Dutch ally reported that Queen Nzinga enjoyed fighting and sometimes dressed like a man. She survived the Portuguese by her wits and audacity. Although Nzinga was willing to ally herself to Europeans, she is remembered as an Angolan leader who never accepted Portuguese sovereignty. So influential was she, that during her life, she was responsible for holding back the Portuguese invasion into the interior of southwest Africa; after her death, the Portuguese slave trade was able to flourish in the region.

Although Nzinga handpicked her sister, Dona Barbara, to succeed her as queen and married her to the general of the army, a succession struggle ensued after Nzinga's death. All of the new rulers failed to thwart the influence of the Portuguese, who regained control of the territory in 1648. It was not until three centuries later in 1974 that a military takeover in Portugal forced the government to withdraw its troops from its African colonies.
Nzinga's rise to power was due to her personal capabilities that overcame the limitations of gender. She displayed practical maneuvers, such as her alliances with the Jaga and Dutch, as well as self-sacrifice during her exiles. Willing to fight for freedom alongside her warriors, Nzinga demonstrated bravery, intelligence, and a relentless drive to bring peace to her people. 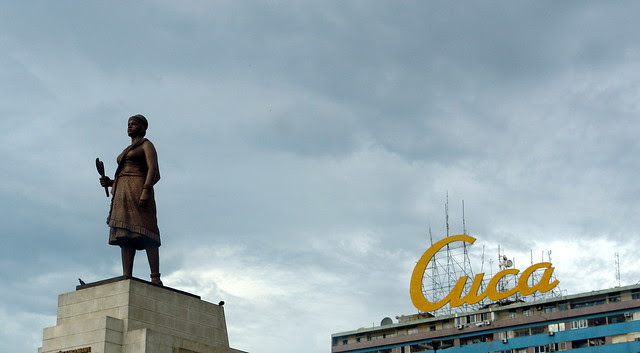