ST PERPETUA OF NUMIDIA: ONE OF THE FIRST CHRISTIAN MARTYRS 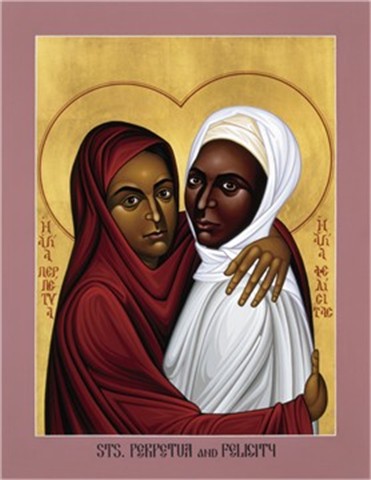 "North Africa was regarded as "the granary of Rome." Under the Emperors it had to supply as a tax to the imperial exchequer a quantity of wheat sufficient to feed half the Roman plebeians, estimated to be about 350,000. The land was noted for its corn-fields and olive-groves.
The population of Roman Africans in North Africa were divided into two unequal parts. Those who benefited the Romans and those who did not. The majority of the people belonged the the second group. At the top of the social scale were great land lords, whose estates were managed for them by overseers; then came Magistrates, the soldiers, the merchants, and the town or city dwellers who had become Roman citizens. These Roman citizens, sons of Africans but Romans just the same, frequented the schools and public libraries, and enjoyed all the very many and blessings and advantages of Romans civic life. There was no difference between them and the European-born Romans. These Romanized Africans lived in the splendid villas, became general like Septimus Severus, professors, and governors and when Christianity came they were made bishops.
Romanized Africans spoke Latin, lived in towns and cities and were at home in Carthage and Numidia, in Rome, or in any part of Roman Empire. Their next door neighbour could be Jew, or a Spaniard or an Italian. Christianity started spreading like wild fire it was at this juncture that the Romans authorities tried to suppress it in A.D. 115. The first suppression on Christian religion started in Cyrenaica and as a results the Jews rebelled. The Romans started impaling the Jews and the Jew tribes fled in two direction. One group fled by sailing and crossing the Bend of Niger to Senegal and Futa. In Senegal and Futa these Jews were joined by another who had taken more westerly direction by a way of Southern Morocco and the Mauritanian Adrar. There is perhaps no group of people in Western Sudan with more Jewish blood in them than the pastoral Fulani in Futa. who,  by mixing with the people of  the shores of Lake Chad, passed on their Jewish blood to the areas around Kanem and Bornu several centuries later.
Soon after the rebellion in Cyrenaica, there were certain important development in North Africa. Christianity which has already gained a convert in an African of Ethiopian origin as as mentioned in ACTS chapter 8:26-40, was to make way to Egypt and other parts of North Africa. Notably in the New Carthage.
Christianity appeared to have come to Africa before A.D. 180, because on July 17 of that year there took a place a trial and execution in Carthage of some of the first martyrs of African Church. Twelve Africans were executed that day- seven men and five women. All the twelve Africans were people who fully enjoyed Roman citizenship. The Leader of the party was the 22-year-old African by the name of Perpetua of Numidia. She was married and had a son.
They were Perpetua and other eleven people taken from Numidia to Carthage in chains to face trial on their faith and put to death. Perpetua`s brother, Saturninus, was among those executed and so also was a slave girl by name of Felictas, who gave birth to a child just before she was put to death. If one visit the city where the New Carthage once stood, there still stand an ancient Chapel dedicated to the memory of St Perpetua. It was built with some of the pillars and stones from the Carthage of Hannibal`s day.
Source: African Glory: The Story of Vanished Negro Civilizations by Dr John Coleman DeGraft-Johnson