In the sixteenth century the Songhay land awoke. A marvelous growth of civilization mounted there in the heart of the Black Continent. And this civilization was not imposed by circumstances, nor by an invader, as is often the case even in our day. It was desired, called forth, introduced and propagated by a man of the Negro race.
—Félix Dubois, Tombouctou, la mystérieuse

Once again like Tenkhamenin of Ghana and Mansa Musa of Mali, a king of great courage and military prowess arose in the large, semi-arid Sahel of West Africa and defeated the reigning empire. Songhai empire depended on mainly on trade in salt and gold. Under the leadership of Songhai conqueror, considerable improvement has been made since the reign of Mali Kings. Now a system of weights and measures set a uniform value on gold and salt.This development eased tensions between merchants, making trade agreements smoother. The imaginative and powerful King of courage, Sunni Ali Ber (The Great) who conquered Mali and brought about this significant improvements.
Sonni Ali, also known as Sunni Ali Ber or "Sunni Ali", was born Ali Kolon. He reigned from about 1464 to 1492. Sunni Ali was the first king of the Songhai Empire, located in west Africa and the 15th ruler of the Sonni dynasty. Sunni Ali began as a common soldier in the army of KanKan Musa, Mandingo ruler of the Mellistine Empire, into which he had been forcibly enlisted, after the defeat and en- slavement of his people, the Songhais. Forced even to fight his own people, Sunni Ali was overcome with rage at the cruelties of the Mellestine emperor and swore that one day, he would take up arms to free his people. As for the empire of KanKan Musa, it exceeded in wealth and magnificence, anything he had ever imagined, and yet, common soldier that we was, Sunni Ali dared to believe that some day it should be his. Sunni Ali, together with his brother Selmar Nar, laid careful plans for escape.
He rallied his people and carefully built a fleet to patrol the Niger river. During Sonni Ali's reign, Songhai surpassed the height of the Mali Empire, engulfing areas under the Mali Empire (and the Ghana Empire before it) 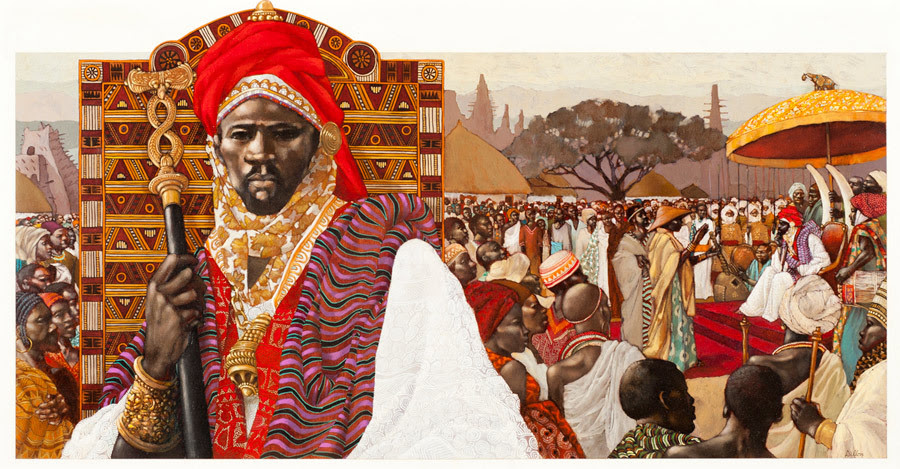 In 1468, King Sunni Ali saw Arab Muslims as intruders to West Africa and he sought return the people to their old traditions. He defeated the Mandinka people, allies of Arab Muslims, Timbuktu and went on from town to town subduing the Malian army which included the Berbers in the Upper Nile. Ali also drove out the Tuareg, he plundered their city and murdered many of its inhabitants, presumably in retaliation for the Muslim leader's failure to provide him with promised transport across the Niger River. Sonni 'Ali's sack of Timbuktu, especially those of the Sankore region who were associated with the Tuareg whom Ali expelled to gain control of the town, established his reputation in the history of The Sudan as a cruel and capricious tyrant, alternately generous and savage. The 16th-century Muslim Sudanese historian 'Abd ar-Rahman as-Sadi, in the historical chronicle Tar'ikh as-Sudan (“History of the Sudan”), related several instances of Sonni 'Ali's summary executions of friend and foe alike. The antipathy of Muslim scholars toward Sonni 'Ali may be attributed in part to what they regarded as his rather unorthodox observance of Islam. He apparently was against the performance of Muslim rites and had firm belief in those of the traditional Songhai religion. 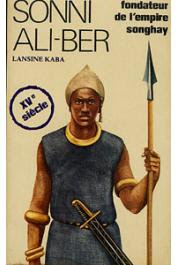 Aware of the benefits of controlling Sudanese commerce, Sonni 'Ali turned to the conquest of the wealthy trading city of Jenne (now Djenné) on the Bani River near its confluence with the Niger. His seven-year siege of the city resulted in its conquest in 1473. Sonni 'Ali spent most of his reign in the field repulsing attacks on his empire, these coming especially from the Mossi, the Fulani of the Dendi region, and the Tuareg
Sunni Ali Ber regarded the Mossi as a serious threat to his burgeoning power. In 1480, using his fine strategic sense and his effective use of cavalry, he encountered the Mossi after they had sacked Walata. He hounded them throughout the Western Sudan and succeeded in driving them back to their home. Next, he defeated the Fulani of Massina. Sunni Ali Ber had an intense hatred for them as he did all foreigners. In 1483, he went to war with the Mossi, repulsing them again and finally ending the Mossi threat in 1486. This conquest enabled him to assimilate the Dendi area, and to discourage Tuareg raiding.
But Songhai was entering the midnight of West African imperial power, the daylight has steadily declined in the warfare between states, and even with Sunni Ali Ber`s remarkable splash of brilliance, the stage has been set for the end of the empire. Historian Felix Dubois made the following statement about Sunni Ali: "He was a soldier only, and a true Black soldier who marches from conquest to conquest, absorbing all the population by war without thinking to organize and create durable work....his lance travels from east to west, tracing the grandeur of the Songhay, unknown to him, it is true. But the task is being prepared for an organizer that is to come very rapidly, to lead the Songhays to the heights of splendor, power and prosperity."
Although it is purported that he ruled from horseback, Sunni Ali Ber did establish an effective system of government. He turned the conquered states into provinces, with a combination of his choices and extant rulers as governors. Consequently, Songhai became a centralized state dominating the entire Niger region. Special organizational arrangements were made for Timbuktu and other Muslim provinces. Additionally, he installed a commander-in-chief for his navy. 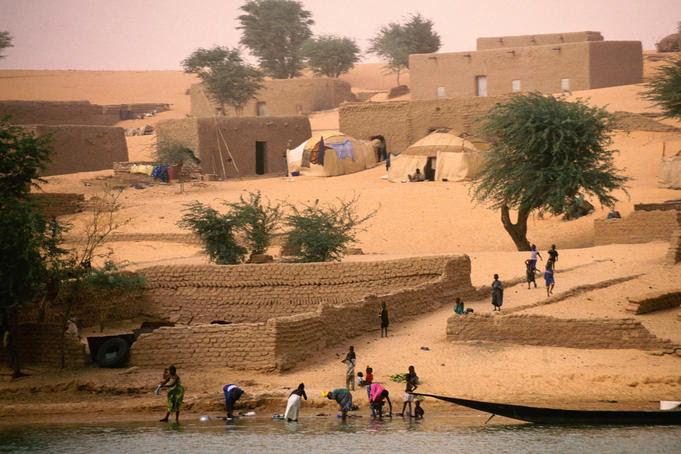 In 1492, Sunni Ali drowned while returning home after a victory against the Fulani of Gurma. He was mummified after his death and thus followed very ancient African traditions. In the same year Christopher Columbus, harbinger of the Atlantic slave trade, set sail for the New World.  According to the Tarikh al-Sudan, "Ali drowned while crossing the river Niger." Oral tradition believes he was killed by his sister's son, Askia Muhammad Ture aka Mamari. He was succeeded by his son, Sonni Baru, who was challenged by Askia because Baru was not seen as a faithful Muslim. Askia succeed the throne. According to the Tarikh al-Sudan it is believed that this action caused Sonni Ali's sister to shout out "Askia!"(forceful one), at the news of this take over.
source:http://blackhistorypages.net/pages/sunnialiber.php
http://www.whenweruled.com/articles.php?lng=en&pg=8