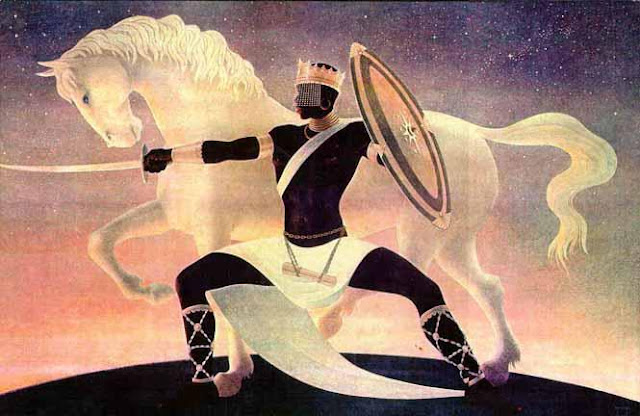 One of the ORISHAS of Yoruba mythology, he’s a Creator God who didn’t get a chance to create.

He was issued with the task of building the Earth by Sky God OLORUN, who gave him blueprints, a handful of mud, a chain, a five-toed chicken, and detailed instructions.
...

Unfortunately, on his way to perform this important task, OBATALA accidentally gatecrashed a Godparty and spent the rest of the evening roaring drunk on palm wine. Seeing the chance for fame and glory, his younger brother ODUDUWA pinched the holy building materials and attempted to jerry-build the Earth himself.

Advised by a friendly chameleon, he lowered the chain over the edge of heaven, climbed down, and tossed the lump of mud into the primeval sea. The chicken hopped onto the mud and began scratching it in all directions.

Pretty soon there was a decent size landscape and thus was the Earth born. OLORUN was so pleased with ODUDUWA that he promoted him to God of the Earth, while the disgraced and boozy OBATALA was put to work making mankind as punishment. 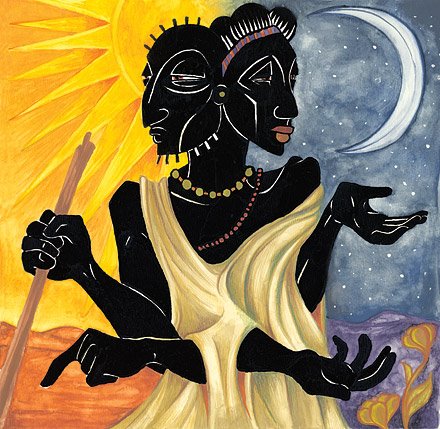 Mawu-Lisa are the creator deities of Dahomey mythology, associated with the moon and sun. In some myths, they are married twins; in others, both deities are aspects of the same androgynous or hermaphroditic deity.
The first day, Mawu-Lisa created the universe and humanity.
The second day the earth was made suitable for human life.
On the third day, humans were given intellect, language and the senses.
Finally, on the fourth day, mankind received the gift of technology. 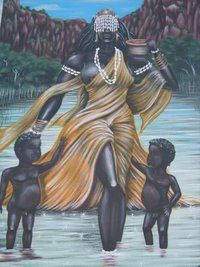 Ogun (Oxum), goddess of sweetness, the needle who pulls the thread that binds the fabric of humanity together. LOVE is the way. 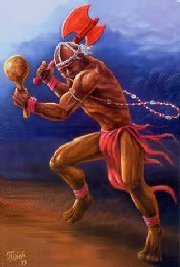 West African God,SHANGO (also known as Chango, Sango, or Xango) OF THE YORUBA PEOPLE AND AFRO-LATINOS.

King of the orisha pantheon, rules over thunder, fire, drumming, dancing and male virility. Shango is actually a deified king who was once the Fourth Alafin of the city-state of Oyó. He is one of the most worshipped orishas in the pantheon and his legends are numerous and speak to the human expe
rience. He has four separate wives: Obba - his first wife who was faithful but unattractive so Shango withdrew his affections from her, Oshun his favourite lover, Oya his equal in strength and power, and Yewa the virgin daughter of Obatala whose purity was stolen by Shango. He is the the owner of the sacred drums, a powerful sorcerer who wields fire and lightning, and loves to seduce women, drink and dance. Shango has a special relationship with Babalu Aye as he was the only orisha to offer him assistance when he was sick and homeless. Shango is often considered the son of Yemaya and his fatherhood is either credited to Ogun or Aggayu. Shango was a very impulsive youth and was quick to anger, and legend has it that Obatala taught Shango the art of diplomacy and gifted him with the white bead that is now a part of his necklace. In nature, Shango is said to live at the top of the royal palm tree and his offerings are commonly placed at the foot of palm trees. Shango is petitioned for help with protection, enemies, sexual, business success, and good fortune.