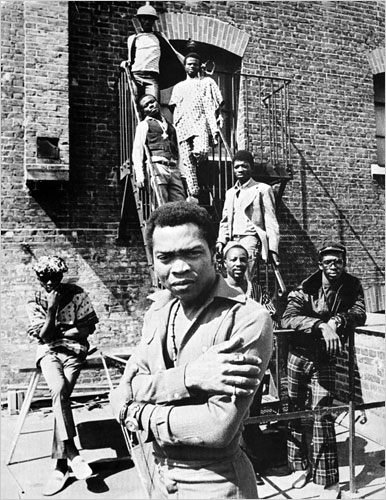 In Africa, Fela, who died at 58 of complications from AIDS, is a figure to rival Bob Marley as both a musical innovator and a symbol of resistance. Afrobeat, the style he forged in the early ’70s, combined African rhythms and messages with the jazz and funk that Fela absorbed during his education in Britain and the United States. Ghanaian highlife, Nigerian Yoruba rhythms, Afro-Cuban mambos, James Brown, John Coltrane, Nina Simone and, yes, Frank Sinatra all flowed into his music, which sounds exactly like none of them.
Afrobeat is insinuating but hard-headed, with stubbornness encoded in its sound and its lyrics. Its grooves are unhurried and hypnotic, with guitar, bass and drums locked into repetitive patterns while voices and horns leap freely. On Fela’s albums songs stretch 10 to 20 minutes, in long, tension-and-release forms. Each track is an excursion through verses, choruses, jagged horn-section lines, call-and-response vocals with Fela’s backup singers and dancers (who were his wives), individual solos and bruising full-band attacks.

It’s music of steadfastness and endurance, of uncompromising determination. It’s also, of course, dance music, made for long nights in clubs. Within the grooves Fela’s lyrics denounce corruption and injustice, call for African values and challenge authority.

Fela was defiant by both instinct and ideology, and he was repeatedly arrested, beaten and imprisoned for his opposition to a succession of Nigerian regimes. In 1977 soldiers burned down the compound where he lived with his wives, musicians and entourage — a pivotal episode in the Broadway show. Afterward Fela changed his name from Fela Ransome Kuti to Fela Anikulapo Kuti; “Anikulapo” means “he who carries death in his pouch.”

Fela was a complex, willful and often contradictory man. “I probably wouldn’t get along with him,” Mr. Jones said with a laugh. Fela was born into a privileged family; his father was an Anglican priest, and his mother was a feminist leader.

Yet he was also a hedonistic rock star, flaunting big marijuana spliffs and his 27 wives — his “queens.” Despite his education he adopted the voice of the poor, singing in a lower-class pidgin of English and tribal languages, and insisting that he was promoting an “authentic African” culture to defy a lingering colonial mentality. And though Fela was shaped by strong women, notably his mother, he claimed that true African women should be submissive. While “Fela!” is largely celebratory, it also notes its hero’s inconsistencies.
Read more:http://www.nytimes.com/2009/11/22/theater/22fela.html?pagewanted=all 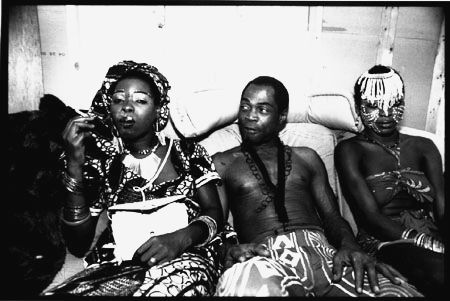 "Nigerian cultural artist, musician and political spokesman, Fela Kuti, with his queens. Fela was one of the most powerful figures to emerge from Africa between the 1960s and 1990s."

THE DANCING (KALAKUTA) QUEENS
Fela`s song could not have been complete without the role of his extra-ordinary dancers. The dancers, vibrant, sensual and regal in their individual and powerful contributions, provided both action and scenery and they seemed to always be on stage, and thus the audience remained connected and energized through them, even in their  (few) moments of stillness.
The queens with their colorful facial painting and beads adornments always bring the audience to their feet.Queens engage and excite audiences of all ages. Their analysis of African movement and song naturally leads to the examination of Africa’s history and culture. Their performances bring about a deeper understanding of the rich and diverse land and people of Africa. Fela’s Queens explore African history and culture through the study of contemporary musicians and the dances that accompany the various musical styles.
Below are some of the photos of original Fela dancers: Kalakuta Queens: 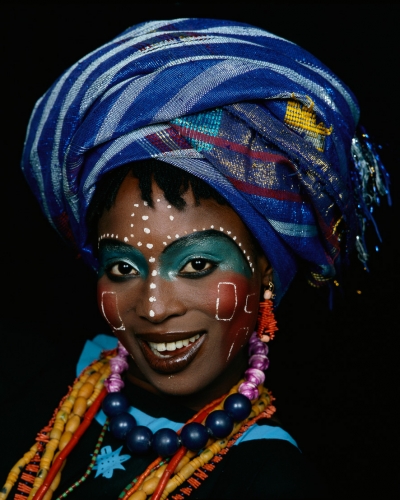 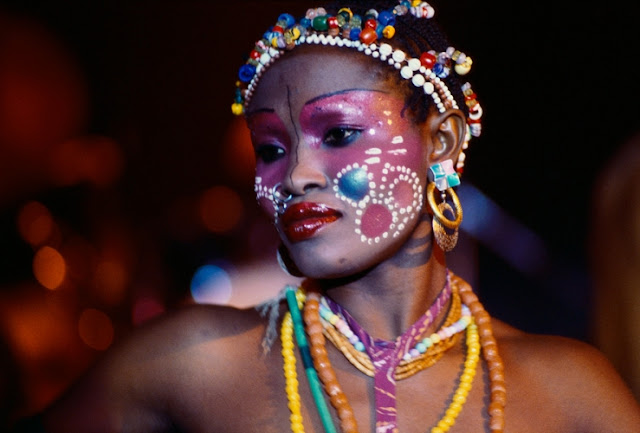 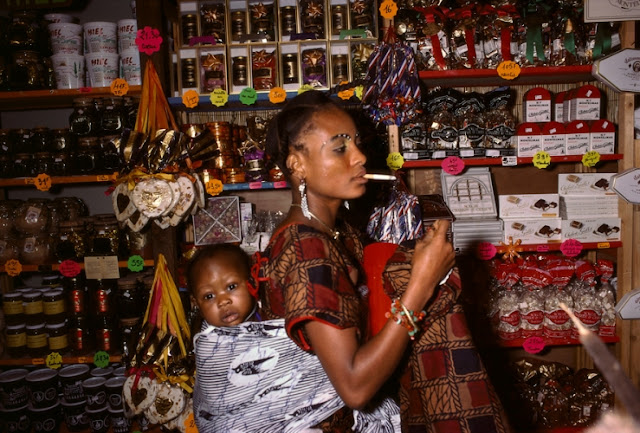 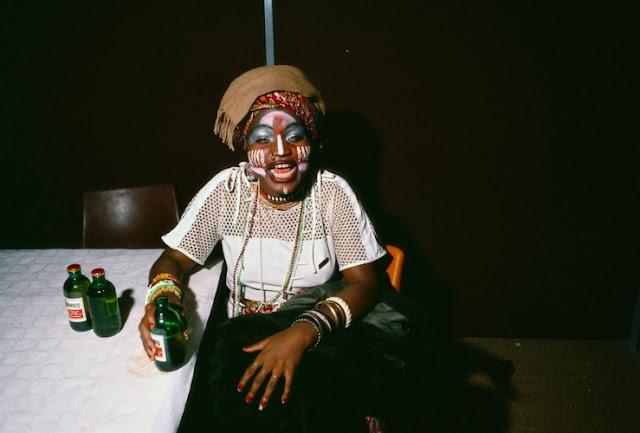 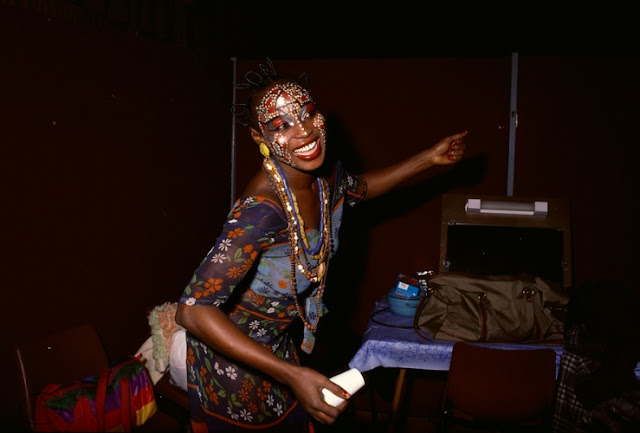 Queen dancing in her room 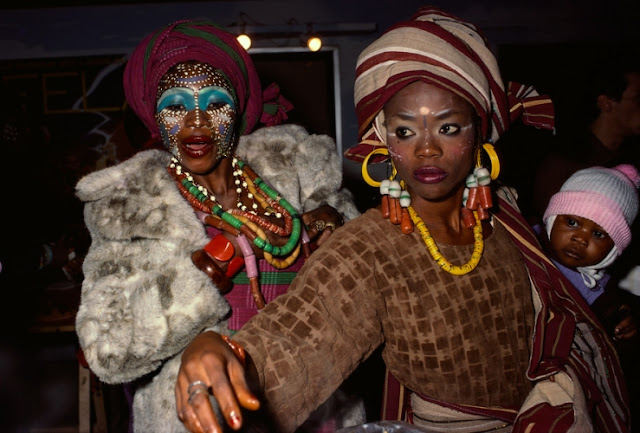 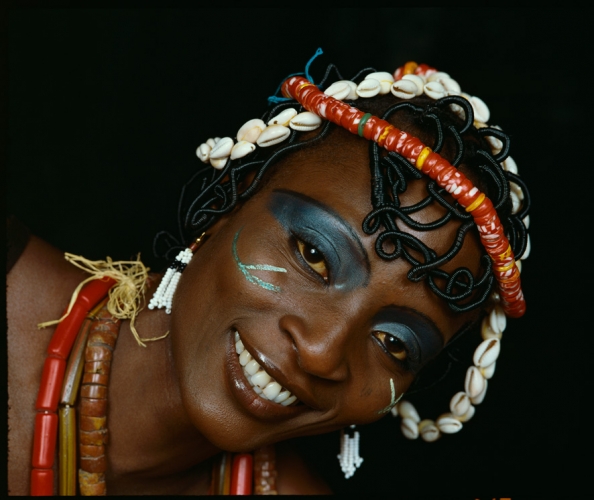 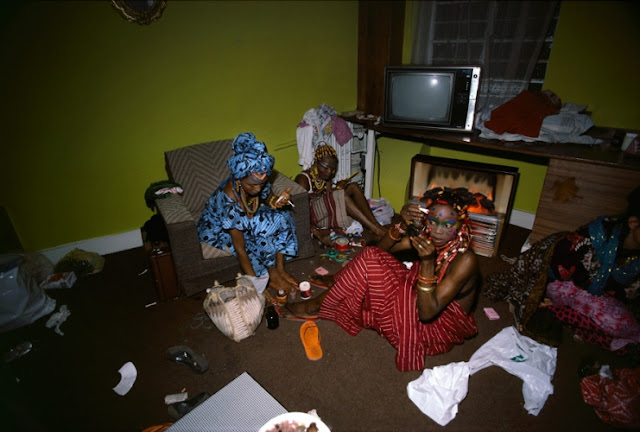 The Queens dressing to go on Stage 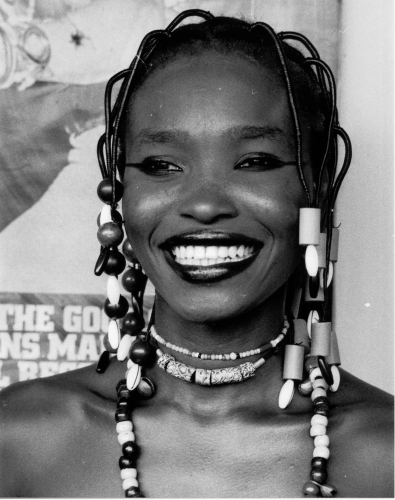 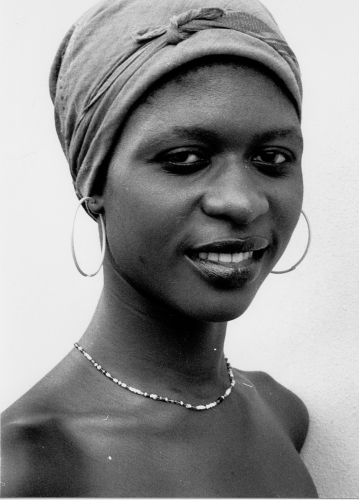 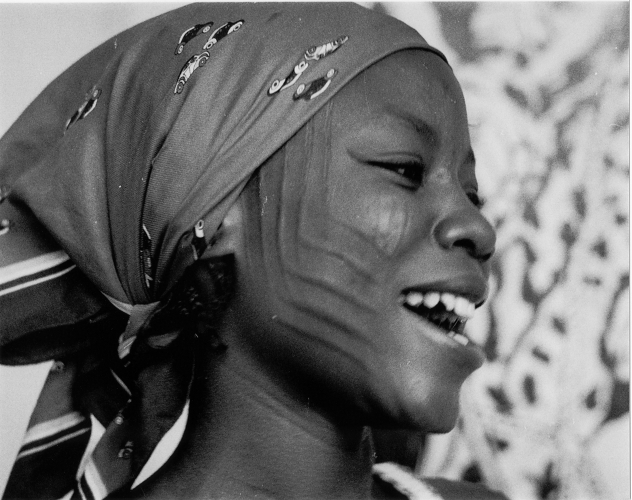 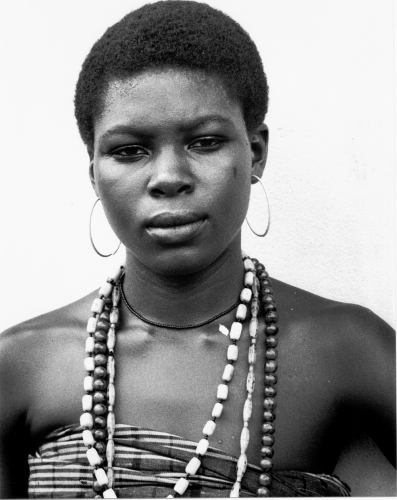 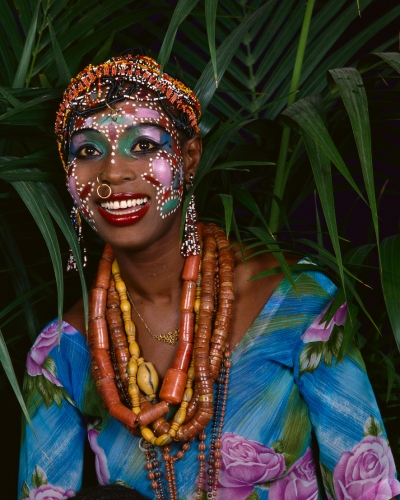 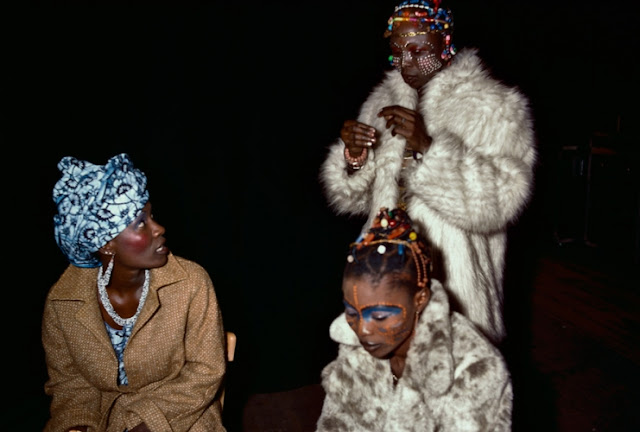 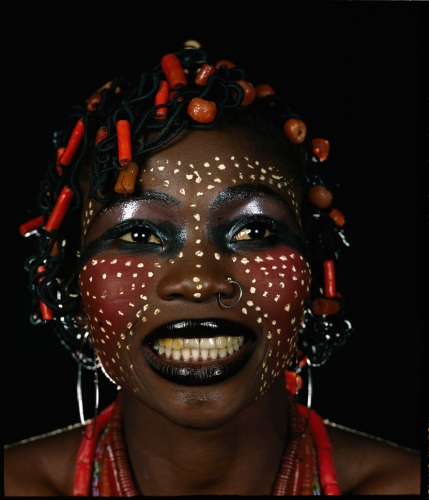 Queen in her African wear 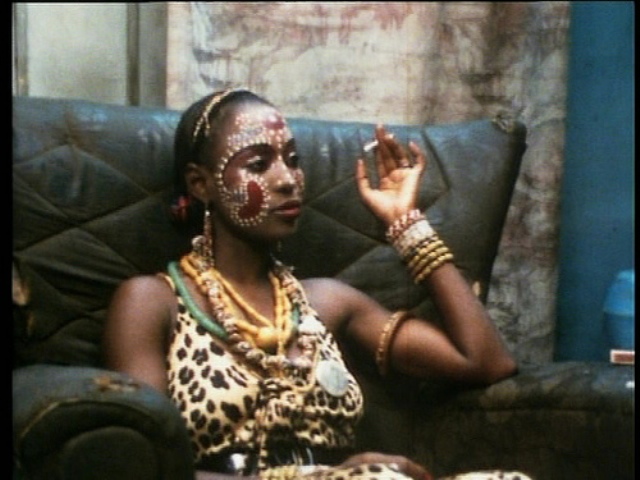 Fela Queen, the wife of cultural artist the late Fela Kuti who joined the ancestors in 1997. Fela revolutionized the promotion and marketing of contemporary African music and culture. 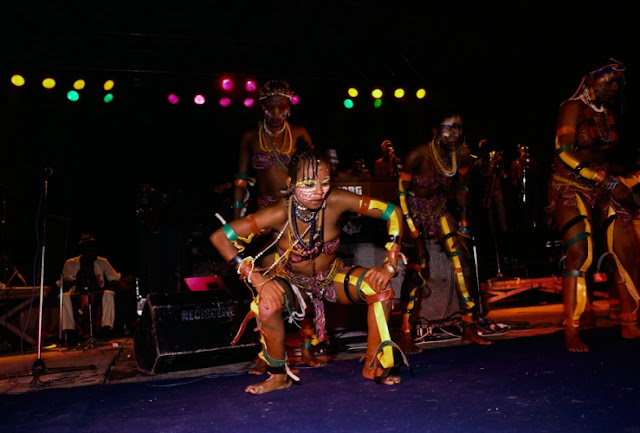 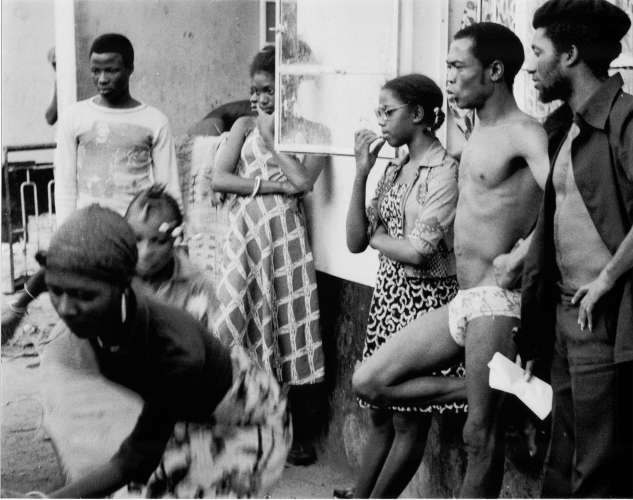 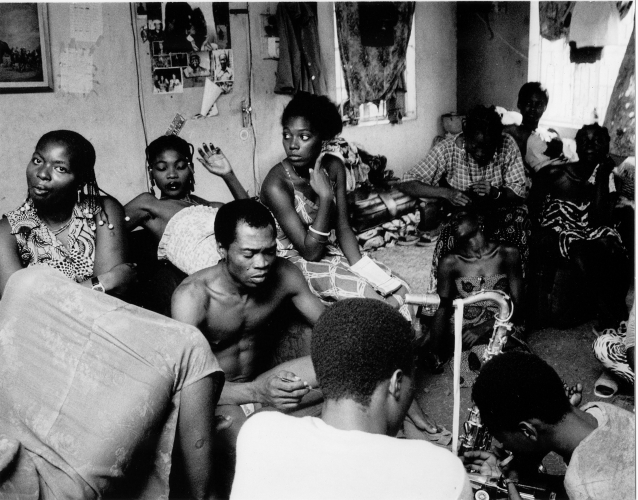 Fela and his Queens at their Shrine 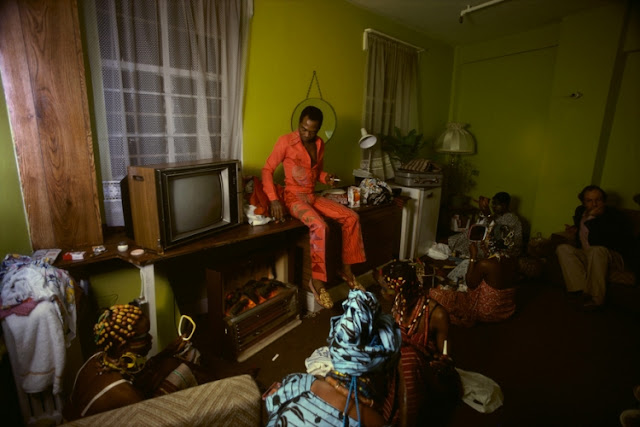 Fela and the Queens preparing to go to the stage 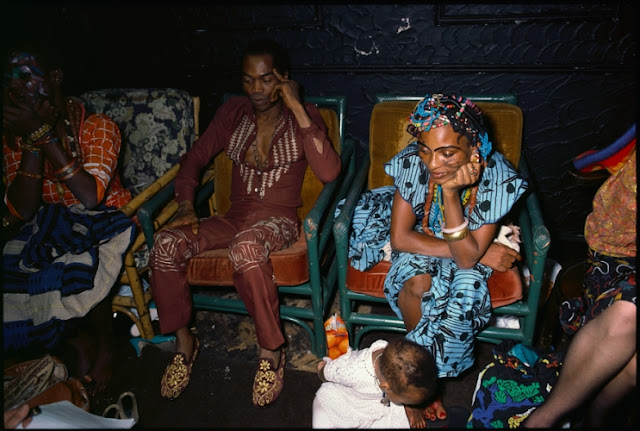 Fela with his Queens (wives) 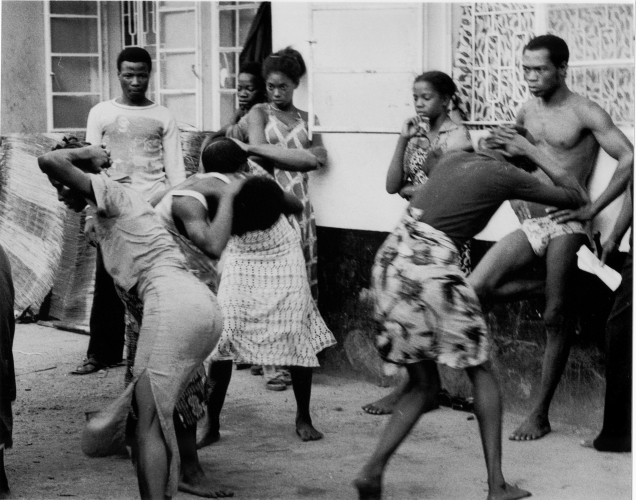 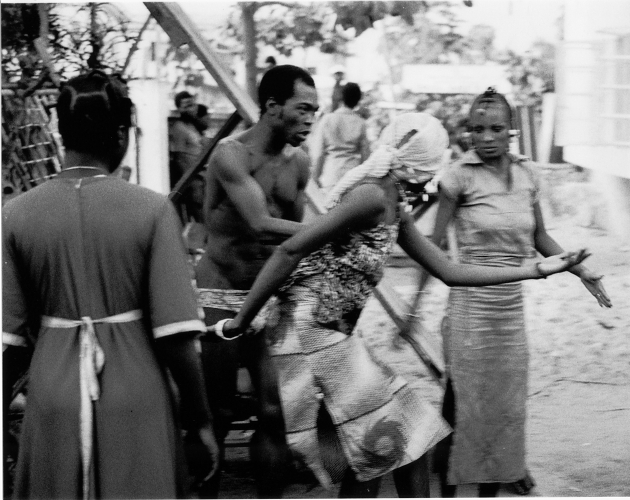 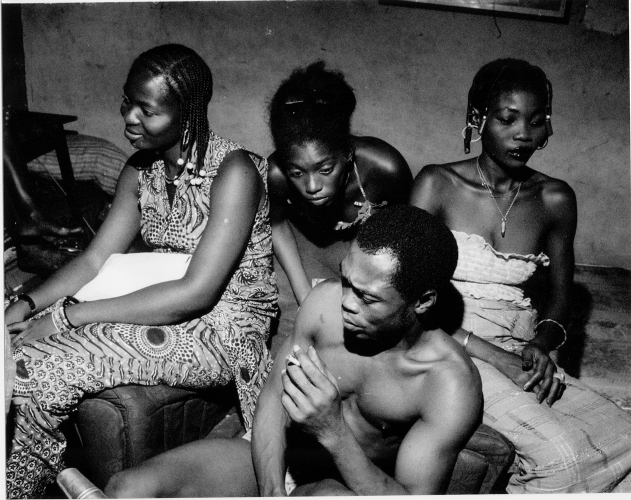 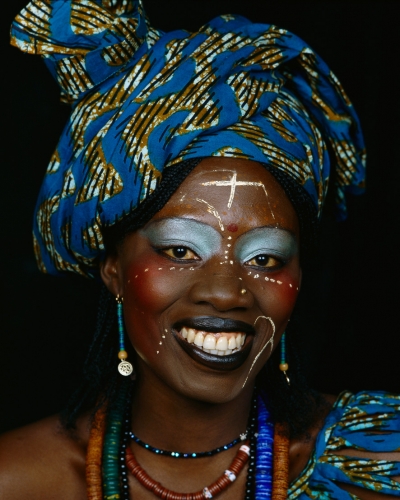 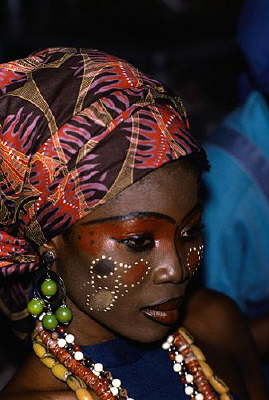