GEORGE EMIL EMINSANG: THE FIRST WESTERN EDUCATED LAWYER IN WEST AFRICA, A POLYGLOT, MERCHANT AND THE FACILITATOR OF TRANSFER OF DUTCH POSSESSIONS IN WEST AFRICA TO THE BRITISH IN 1872

George Emil Eminsang (ca 1833 – 1901) was the first Western-educated lawyer on Gold Coast (now Ghana), an unquestionable authority on aboriginal laws, an expert in commercial law (in today`s world mergers and acquisition) and a prominent merchant. He was arguably the first native West African European trained lawyer. He was also gifted polyglot who spoke five languages, viz: Dutch, Portuguese, German, English and Fantse.
Eminsang was the leading lawyer who single-handedly facilitated the commercial transfer of the ownership of Dutch possession in Elmina and Gold Coast to the British in 1872. This legal genius was made a Commander in Elmina once the British had bought Elmina Castle, but the locals mistrusted the situation and he relocated to Cape Coast.
Among his many achievements, Eminsang served as consular agent to the Dutch in Elmina (1878–1879), and to the Congo and the United States in Cape Coast Castle (1890).

Geroge Emil Eminsang was born in 1833 at Elmina to Joseph Emil Eminsang, a merchant and innkeeper, and an unknown lady from a prominent Dutch/Fanti Euro-African family. He was also the nephew of the great ensign of Elmina, Kobena Eminsang. His name Eminsang was anglicized form of indigenous Fante name "Eminsa." Eminsa is the name of a Fante River Deity. Eminsa means "flowing and dancing thing." Fante River Deity "Eminsa," which constitute one of the 77 Fante deities, is well-known ancient river goddess that gives twins (ntafo) to people that consult it. That is why when Fantes are celebrating  "Ntafo Adze" (festivals for Twins) and the twins are dancing in a circular and whirling manner because climaxing spiritual trance, the akomfo (traditional priests) sing their appellation "Odosa! Odosa! Egya Eminsa o! Hen na Eminsa o!" (Lovers dance! Lovers dance! Father River that flows and dance! Our Mother the River goddess that flows and dance!). Nowadays, the Fante name Eminsa is spelled "Amissah." Very few people who really understand the meaning of the name maintains its original form "Eminsa."
Anyway, Eminsang was a very intelligent child and had his early education at home, where his Elmina parents were literate in their native Fante, Portuguese and Dutch and at the Elmina Castle. Eminsang endeared himself  academically in his early teens to the Dutch teachers and these made it possible for him to be sent to Holland to continue his studies. It is said that Eminsang studied law and philosophy in Holland and later in Germany before returning to Gold Coast.
Back home in Elmina, Eminsang devoted much of his time to teach for several years at the Elmina Castle School, where he had completed his primary education. 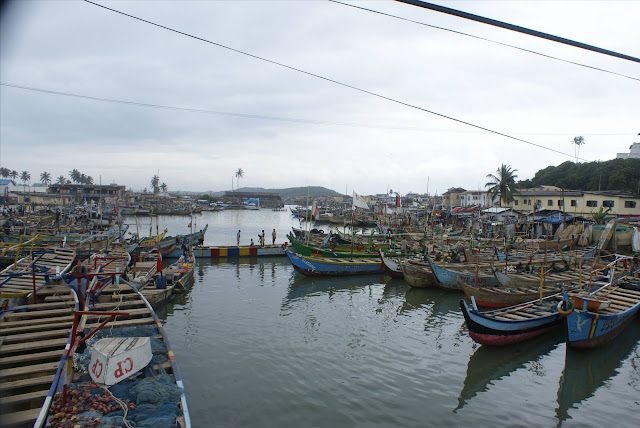 He later turned to trading and became a successful Gold Coast merchant, whilst putting his legal training for effective use for his people. Eminsang was appointed to the Dutch Legislative Council and was the principal lawyer to negotiate the sale of the Dutch Gold Coast possessions to the British Government in 1872. After the sale, he was appointed Civil Commandant in Elmina by the British authorities. The Elminans, who were traditionally aligned with the Ashanti and the Dutch, distrusted the sale and eventually drove Eminsang out of the country. He then settled in Cape Coast where he continued to practice law and pursue his merchant career.

Fort Elmina. Castle is the same, more or less, of the Dutch conquest in 1637. Outside the fort is still well preserved the Dutch Reformed church built at the end of the Dutch rule.

That the Elmina people distrusted their own son Eminsang was very unfortunate incidence. This is because his inability to  use his singular membership in the Dutch Legislative Council halt the sale of Elmina Castle was no fault of his. T. P. Manus Ulzen in his recent book "Java Hills: An African Journey" published in 2013 demystified the issue. Ulzen (2013:132) averred that "on August 6, 1868, the chiefs and people of Elmina on their own concerted effort sent a formal petition to the Netherlands to register their opposition to the handover of the castle to the British. They received no response from The Hague. As the people became more restless in February 1869, the King sent a personal message via George Emil Eminsang (Amissah), prominent Elmina businessman." Ulzen explained further that Eminsang traveled to Eminsang to The Hague on behalf of the King of Elmina and was "met by a Dutch government stonewall. It was suggested to him that he meet the former Dutch Governor Nagtglas. This was of course a snub of Mr Eminsang and the message he bore for the Dutch King and parliament. Eventually, Eminsang was able to deliver his message to the appropriate forum. The hope of Elmina people was that the Dutch would send an expeditionary force to protect them against the British tidal wave, which was about to sweep through their lives and history. The Elmina government was unaware of the inferior position from which the Dutch  approach their dealings with the British (Ulzen 2013:133)

Elmina Castle, then  a Dutch property that Eminsang negotiated its transfer to the British in 1872

In contemporary Ghanaian history, celebrated Gold Coasters Joseph Ephraim Casely Hayford and John Mensah Sarbah are touted respectively as the first solicitor and barrister in Ghana. Whilst Casely Hayford`s case is historically true, that of Mensah Sarbah as first Lawyer in Ghana is without merit. In the preface of his own book Fanti Customary Laws, John Mensa Sarbah wrote in a letter to Eminsang:
"Dear Mr. Eminsang, — Pardon the liberty I take in sending you this open letter, with this my first attempt in the Thorny paths of literature. I dare do so, for not only you are a Native of the soil and one of my father's friends, but also the senior member of the Bar of the Western Province of the Supreme Court of the Gold Coast, having commenced to practice when we, who are now members thereof, were but schoolboys.
—John Mensa Sarbah, Law Courts"
The argument that Eminsang was the first West African European trained lawyer is premised on the fact that the first known other native West African lawyer was Christopher Alexander Sapara Williams (1855–1915), who was the first indigenous Nigerian lawyer, to be called to the English bar on 17 November 1879. Since the records show that Eminsang was the principal lawyer who negotiated the sale of the Dutch Gold Coast possessions to the British Government in 1872, at a time when Williams had not been called to the bar shows that Eminsang  precedes Williams in the legal profession.

View of Fort St Jago from Elmina castle in Ghana

View of Fort St Jago from Elmina castle in Ghana