Guro, or Gouro, also known as Kweni (Kouen/Koueni/Kweny), Dipa and Lo are ancient hunters and currently agricultural Mandé-speaking people residing in the valley regions of the Bandama River in Côte d’Ivoire (Ivory Coast). The Guro who are part of the larger Mande ethnic group in West Africa can be found primarily in the areas of Haut-Sassandra and Marahoue. They are bordered by the Bete(s), to the the west and Baule(s), to the east. 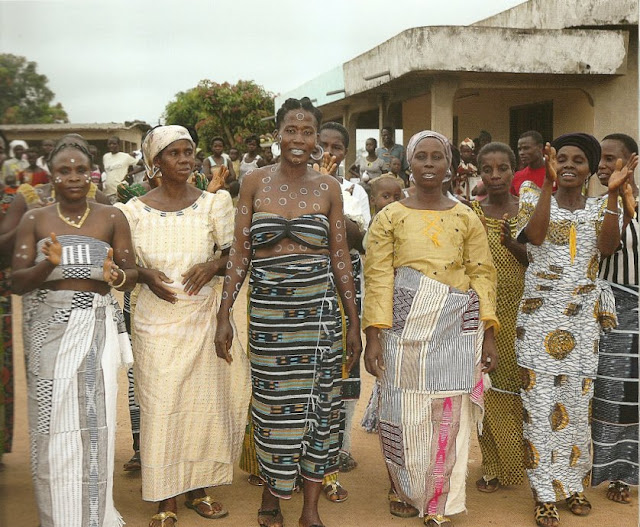 The Guro originally called themselves Kweni; their name "Guro or Gouro" was given to them by their neighboring Baule people. In fact, the name Guro is a Baule name. The Guro culture is closely related to that of Baule as a result of deep interaction between them. Most of the Baule wood carving artistry has the influence of Guro and the Baule in turn has also influenced Guro with their Akan traditional way of life especially in the area textile and dressing.

The Guro people with a population of over 500,000 people are direct descendants of the pre-colonial and West African Mali empire`s epic hero Sundiata Keita. They believe that after disintegration of the Mali empire, they migrated southward to Ivory Coast to escape Mandinka expansion.
Guro people are very traditional people and believe in their ancient culture. They have male and female secret societies which people are initiated into. The male society is Je and the female one is called Kne. Mask are worn by these secret societies.
One important mask of the Guro people is Zamble. The spirit of Gu, the wife of the supernatural being, Zamble, is also depicted in the masks of the Guro, These masks, polychrome or brown and black, consist of intricate details. Considered the most beautiful of the Guro masks, the Zamble masks are the most desired of collectible masks.

History
Guro are part of larger Mande people. They trace their origins to the ancient pre-colonial West African Mali empire. After the collapse of the Mali empire, they fled from their area in the north as a result of Mande invasions in the second half of the 18th century. They finally came to settle at their present location in Ivory Coast.

Guro elders
Economy
Although formerly the major male occupation was hunting, the Guro are now basically agriculturists whose subsistence crops include plantains, rice, and yams; their cash crops include coffee, cocoa, and cotton. They practice shifting cultivation, men clearing the fields and women doing most of the other work. Some of their communal fields were being replaced by industrial plantations in the late 20th century. In the southern part of the Guro people’s territory, arboriculture includes palm-wine extraction; in the north, kola oil and nuts are traded for dried fish from the Niger. The exchange of subsistence goods at markets is usually carried out by women; other items are traded by men.


Division of labout
Prior to abandoning their villages, which occurred during colonization, the men cleared the land and the women planted crops such as cocoa, rice, cotton, yams and coffee, depending on the season. The chief was the head of the oldest lineage in the village and the members of the principal lineage made up his council. The trezan, the master of the land, divided the land among the people and made sacrifices.

Guro culture
The Guro retain their own religion, involving many cults and deities. An earth master makes sacrifices to the earth for the benefit of the village and its inhabitants. Each village also has a diviner who is consulted before important decisions are made.

Of all animals, the Guro revere five: the antelope, the hyena, the leopard, the crocodile and the elephant. These are animals mostly found in the savannah and tropical forest where the 200,000-strong tribe lives.
The Guro people are mostly farmers. Therefore, their craftsmanship embraces imageries tied to the land and to agrarian practices.  The symbolism of the four animals featured on their masks derives from these: the antelope is beloved for its grace and speed and for the folkloric belief that a mythical antelope taught men to farm. The hyena is regarded as a hardy animal living off the land, smart and resourceful; the leopard connotes power, bravery and enterprise; the crocodile is regarded as the king of the marshes, guarding the water bodies found in the hinterland location of the tribe. The elephant is believed to be graceful, kind, powerful, royal and loyal.
The masks depicting the animals sacred to the Guro, are always worn during ceremonies, but certain masks depicting the antelope and porcupine are not permitted to be seen by women. The women also have a secret society known as the Kne, which is religious in nature.
In addition, these animals are believed to represent links between the human and the spiritual worlds. No Guro mask is without hidden messages and spiritual importance. The tribal life is mostly regulated by the Je society. This male secret society is responsible for the social, administrative and judicial organization of the tribe. It is responsible for making decisions and for protecting the members of the tribe.

It is the Je society that guards and employs all of Guro masks. These masks are of two types: anthropomorphic and zoomorphic. Apart from masks, the Guro people also carve figures. These figures often stand with arms akimbo and have faces quite similar to the masks. Lesser figures are the elegant female heads mounted on Guro weaving looms.
Of masks, the Guro art is very similar to the Baule's and are sometimes difficult to tell apart. However, there are subtle differences between the two styles. For example, Guro masks usually have longer faces. Furthermore, the raised forehead and the bridge of the nose of a Guro mask forms an S-shape profile.

Another marker of Guro masks is the nature of the tattoo marks found on them. Guro tattoo marks replicate the scarification marks found on the men of the tribe. These marks are cut in relief on the foreheads and the cheeks in repetitions. Guro masks have small mouths and sharpened teeth. The coiffures on the masks are done in elaborate, geometric patterns, mostly in five parts. In addition, most Guro masks have broad, wooden collars to hold raffia cloaks worn by the dancers.

Yet another distinction of Guro masks is the usual and common addition of animal features even to human masks. These can be in the form of elephant's ears, antelope's horns or superstructures of bird's heads. So great is the tendency to add animal features to masks that the Guro carvers' finest masks are the mash-ups of different animal features. These are the zamble masks.

The zamble masks combine the attributes of hyena, antelope, leopard and crocodile. Like all Guro masks, they can be polychrome or come in brown and black. Zamble masks have the most intricate carvings of all Guro masks. The attention to detail and the fine, careful replication of the ridges on these masks are faithful reproductions. The uncannily accurate rendering of zamble masks gives them a bold, life-like quality and makes them highly prized.

Face mask. Guro people. Ivory Coast | Mid 20th century | Wood, paint | Mami Wata is recognized today by diverse peoples throughout Africa as a powerful water spirit. Her origins can be traced to a late-19th-century German lithograph of a female snake charmer, which appeared in an Indian calendar that circulated widely in western and central Africa. Interested Africans scrutinized the snake charmer's image and this mask copies directly from the original lithograph.