The Bete people also known as Magwe, Tsien, Bokya and Kpwe; are ancient hunting, patriarchal, hard-working agricultural and culturally unique ethnic group that forms a subset of the larger Kru-speaking people residing in Côte d'Ivoire (Ivory Coast) and Liberia. Bete people lives precisely in the southwestern and southern-central parts of Côte d'Ivoire, between the Akan ethnic groups to the east and the Guro tribe to the north. They occupy towns and villages in the regions of Saloa, Soubre and Gagnoa. 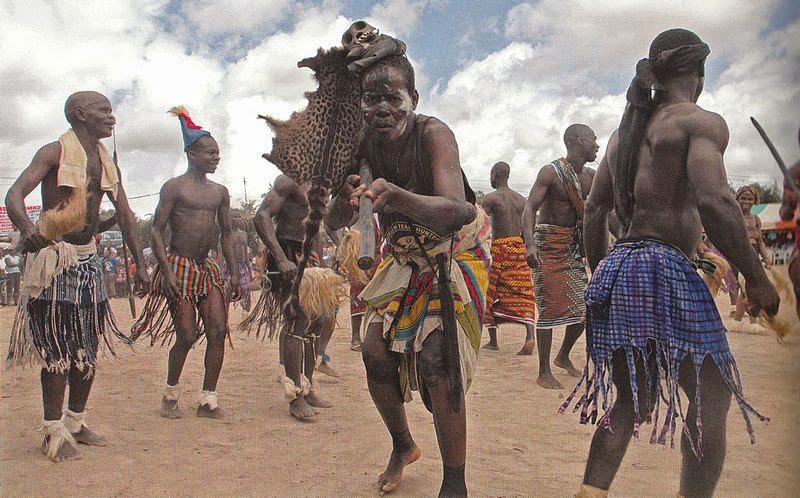 The Bete are a little-studied Ivory Coast group and with their population of over 825,000 people constitutes 6% of Ivory Coast`s population and are therefore classified as minorities. Despite their minority status they have powerful individuals and intellectuals among them.

Former Ivorien president Laurent Gbagbo was a Bete, as a result of this the Bete were target of serious military attacks and civil harassment in Ivory coast after France and Western nations supported Northern Dyula (Dioula/Jula) man Alassane Dramane Ouattara to topple him. Former revolutionay student leader of the Student Federation of Cote d'Ivoire (FESCI), founder of the Coordination des Jeunes Patriotes, charismatic politician and ally of former president Gbagbo is also a Bete man.

The Bete have strong  cultural and artistic links to the Dan, the We (Gwere) and the Guro, among others. To render the hostile forces of the forest material, they sculpted a type of mask that would provoke terror: the gre, with its grimacing face, distorted features, facial protuberances, horned heads, bulging forehead, tubular eyes, and wild animals' teeth.

In earlier days, this mask presided over the ceremony held when peace was restored after armed conflicts and it participated in sessions of customary justice. Of We origin, the Bete mask is more elongated and has no fangs, horns, or bullen nails.

They also have linked to the market economy and much of their effort is devoted to the cultivation of cacao and coffee.

Iconic Bete man Frédéric Bruly Bouabré, painter, poet and author of famous Bete Alphabets. (The author of Bété alphabet died on 28th February 2014 at Yopougon (Abdijan). He has been honored by his peers on 24th April 2014 at the museum of Civilizations of Ivory Coast. A preview of the exhibition “Life and Works of Bruly Bouabré” the artist was outdoored. Works of the artists, his photo albums, his correspondences with African heads of State will also be displayed until 2nd May.
Former serviceman in the navy during the Second World War, Bruly Bouabré got back to native Ivory Coast after the war where he occupied the of book-keeper for the railroad line Dakar-Niger. On 11th March 1948, he got a surprising vision and put an end to his function.
“The sky opened before my eyes and 7 colored suns drew a beauty circle around their Mother-sun, I became Sheik Nadro: the one who does not forget”, he explained. Creating a new writing characteristic to Africa was the new mission of the man. He drew back narratives with drawings and signs peculiar to him. His syllabary rich of 448 signs is called “Bété alphabet” of the name of his ethnic group of origin.
In 1958, the famous unknown man was revealed to the world thanks to the writing of the anthropologist Théodore Monod, author of the study “Un nouvel alphabet ouest-africain : le bété (Côte d’Ivoire)” (A new West African alphabet”: The Bété (Ivory Coast)), published in the News bulletin of French Institute of Black Africa (IFAN).
Since 1989, the works of Frédéric Bruly Bouabré have been making tour of the world (Berlin, Frankfurt, Biennial events of Venice, Sydney, São-Paulo, Paris, Dakar, Documenta XI of Kassel, Moscow or London).
On 8th May, the works of Ivory Coast artist will be displayed at the exhibition “Ici l’Afrique” at the Museum of the Swiss beside those of about twenty other African artists.{http://www.africatopsuccess.com/en/2014/04/24/frederic-bruly-bouabre-ivory-coast-is-paying-tribute-to-the-author-of-bete-alphabet/})

Map of the ethnic clusters of Cote d'Ivoire


History
Bete people share common historical and migration origins with the parent Kru ethnic group. It is believed that successive waves of migration brought them overland from the east and north, and by the sea. The Bete  came in groups which has been identified to be around ninety-three sub-groups. They first settled on the left shore of the Sassandra River before dispersing to their current dwelling places.

Economy
The Bete who were historically hunters are mainly into agriculture (subsistence farming), they only grow what is needed by the tribe. In recent times many of them are into commercial farming. They are one of the Ivory coast ethnic groups that can boast of big Cocao and coffee farms. The commercialization of their farming activities have linked them to Ivory Coast`s market economy.

Culture of Bete people
The Bete society is a patriarchal and patrilineal one and they live – under the ancestors’ authority – in small “headless” villages. Social control was exercised by the leading member of individual lineages (of which there were several in each village) who exercised judicial and financial power within the community. Spiritual authority was wielded with an array of paraphernalia, notably including the “gre” mask, a horned and decorated creation (originating with the We) designed to instill terror in the onlooker, to quell social unrest, and to be worn when meting out justice after conflict.

Statuary is uncommon, and is based around feminine iconography that refers to the mythical mother figure. There is no recognised liturgical function, although some early reports indicate that a pair of figures was often placed under a rain shelter in a village in order to represent the founders. This evocation of a primeval couple has widespread resonance in African culture. Rare figures with exaggerated genitalia are probably linked to a magico-religious appeal for fertility; alternatively, they may have constituted a more general role, evoking or celebrating the fertility of the village/land, its founders, or the forest from which the people made their living.
It is known as one of the most progressive tribes due to the focus on individual rights. A "chief" is chosen by the people based on who is the wisest. This leader stays in power until his death or any wrongdoing. Then another chief is chosen based on wisdom.
Men and women play equal roles in society as well. Bete women are widely known as the most outspoken of any other tribes.

As far as courtship, the men of the Bete tribe travel outside of the village to date. Dating within the tribe is not allowed because of the belief that the village is a family unit. Ethnically diverse marriages are strongly encouraged.Before dating begins men ask about the woman's family to make sure there is no trace of any relation.Marriage is not possible if the couple is related in any way. The men do not leave the village when marriage. Rather, the wife is brought into the man's tribe. This is because the man is expected to provide a home and land. He has already inherited land from his father,so the women must travel to outside of their villages for financial security. The wedding is discussed only among the bride and groom. It is meant to be a surprise for the parents, particularly the woman's parents. The date of the wedding is set and the wife's family is invited to the groom's village to celebrate. The woman's family then visits to make sure the woman is marrying of her own free will. This is a polite formality. When she has said that she is sure of her decision then congratulations is acceptable. The wedding ceremony takes one week. Each day is a celebration of the bride and she is treated like a queen.
Polygamy is a common practice. Men usually have no more than three wives. When a man decides to have another wife, the first wife often becomes a sort of mother to her. The original wife may choose to be head of all other wives. This is a common practice but not an obligation. Any wife may choose to leave their husbands' if he decides to marry another woman. Often, the original wife will make the second wife feel unwelcome in order to make her leave instead. In some cases the wives will get along and become friends.

Divorce is also very common. A wife can decide to leave her husband and go back to her home village whenever she chooses and is not obligated to give her husband any notice or explanation. The husband in turn can choose to kick his wife out of his home. Counseling among friends is very common in marital disputes.
Because of education, these traditions are usually only practiced by people still living in the villages. When the children move to cities and go to universities they usually adopt Western traditions of marriage.
They maintain a harmonious relationship between nature and the ancestors. The vast majorities follow their traditional African religion and believe in the God (Lago) however; they do not worship this God. They believe in the spirit world to guide and protect them through daily life. These spirits they believe are found in nature, namely rivers, rocks, forests etc. Sacrifices of worldly possessions are made to the spirits to appease them especially during troubling times.