The Bedik (Budik or Bedick) people are ancient cave-living agrarian minority Tenda-Menik  speaking people occupying the most isolated area of eastern Senegal,  Arrondissement of Bandafassi. Bedik people lives apart from society. They live in caves carved in the mountains, often without light.

One seldom meets a Bedik in political meetings or other popular gatherings. On the other hand, many Bedik join the army. Being accustomed to mountainous environment, they excel at climbing cliffs and walking long distances without getting tired. 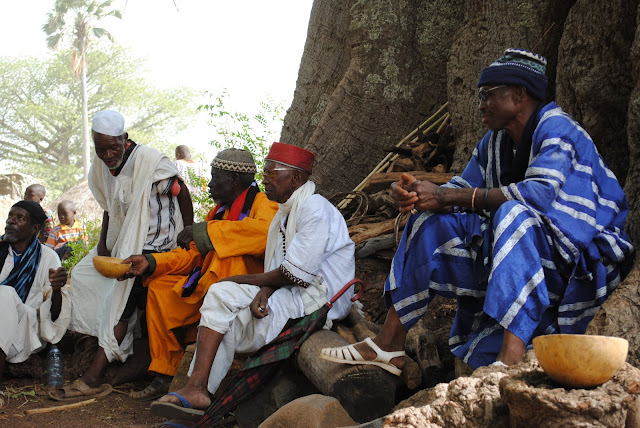 Bedik elders welcoming guests with offer of drinks. By stayinggroundedontherun

The Peuls (Fulani) refer to them as the Tanda-Bande who speak Tendanke.

Bedik woman preparing food
Language
Bedik people speak Menik, a Tenda language (of Senegambian language) which belongs to the bigger Niger–Congo family of Africa. Manik comes from their word for dolerite, from which they build their houses (much like the Bassaris).

Menik: an endangered language between two big languages
Bedikpeople and live in the midst of Peulh and Malinké, the two principal ethnics in this region. Approximately there are 35 languages in Senegal some of them are big like (Wolof, Peulh ,Serere..) and the small ones include (Menik, Bassari, Konyagi…). In the present political situation the government codified every language; nevertheless none of these languages are taught at school.

Two types of bilingualism are observed in this area:
- the first bilingualism is necessary for their social and economic integration in their cohabitation with the two big languages (Peulh and Malinké), thus each Bedik should speak Peulh and Malinké next to their own language
- The second bilingualism observed in this area concerns the native language and French. This is not necessary, for instance a big number of the populations who live there are illiterate, and French is used only in the class or in the administration.

A Bedik girl wearing traditional beadwork, necklaces, and earrings in the village of Iwol, Senegal, Africa.
© Mr. Janis Miglavs
Often in the multilingualism debate European languages are opposed by African languages. Nevertheless we should note that this multilingualism can constitute a danger for some languages that are called endangered. It is known that linguistic change is often caused by the social mutation. And the social contact is accompanied by an abandonment of the native language. Two things help the Bedik to preserve their language:
- the first strategy is to oblige the young to speak his own native language in the village the old persons should do all they can to encourage the young to speak their language.

- the second strategy is the sacredness of festivities. These ceremonies are done in Menik, the speech of tribal chief, the sacred texts, and songs are in Menik
- the last strategy is the threat of being expelled from the community. The Bedik speak Menik in order to fully take part in the life of society

History
Bedik people migrated from ancient Mali empire. Their ancestors are the families Keita and Camera that came from Mali because of the War led by Alpha Yaye coming from Fouta Djalon. The ancestral village of Andeul was first settled atop the steep plateau by the Camara family.

Above all, they wished to maintain their animist religion and avoid capture by slave raiders and warriors, particularly those led by the Peul ruler Alpha Yaya from the mountainous Fouta Djallon to the south. The Camara family chose the specific spot of the village to enjoy the shade of a majestic baobab tree. Upon finding the tree filled with bees, the Camara sacrificed seven people to buy the protection of these creatures—an alliance that proved invaluable for repelling Alpha Yaya and his warriors when they attempted to scale the mountain. 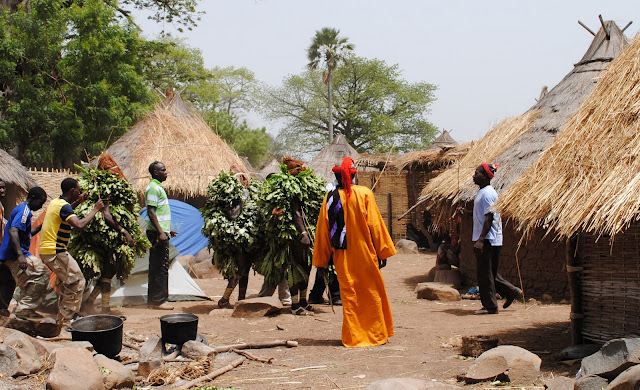 Since then, the village has grown to include two more families—the Kanté and the Keita. The Kanté originally lived in caves on the adjacent mountain where they worked as blacksmiths. When the Camara family became tired of hiking so far to purchase their iron tools, they ultimately invited the Kanté to live at Andeul where they continue to work iron and make other crafts such as pottery. The Kanté also supervise rituals such as initiation ceremonies that continue to exist alongside the adoption of Catholicism. A man of the Keita family first arrived from the neighboring village of Iwol after too many of his children had died (from sorcery?). Recognizing the power and wisdom of this man, the Camara and Kanté families naturally invited him to become their chief. In his humility, however, the first Keita invited his brother from Iwol to come and rule over the village. Hence the Keita remain the chiefs of Andeul today despite the primacy of the Camara family and the economic and ritual power of the Kanté.

Bedik tribe boys running though their village of Iwol, Senegal as part of their 6-month initiation into manhood.

© Mr. Janis Miglavs
Whatever be the case, Bedik just like their bassari neighbours in the Bassari county, positioned themselves on the mountain-tops to escape from war as well as preventing slave raiders from capturing their people.
The Bedik split themselves into three groups: the Biwol, the Banapas, and the Nyolo.

However, the three groups together total only 1,500 speakers. The Biwol and the Banapas live in the regions immediately to the west and north of Kedougou respectively. The Nyolo reside in the middle and a little to the northwest, forming a triangle between them. The Biwol represent the largest group of the three, followed by the Banapas and finally, the Nyolo.

The three groups are semi-nomadic, in that they consider themselves inhabitants of a village which is more or less centrally located to their given area. During planting and harvesting seasons they live in temporary "encampments" (i.e., huts made of woven bamboo) in the surrounding area. The Biwol say they are from Iwol, while the Banapas say they are from Bantata, and the Nyolo say they are from Oussonkala (a village abandoned for some years now). 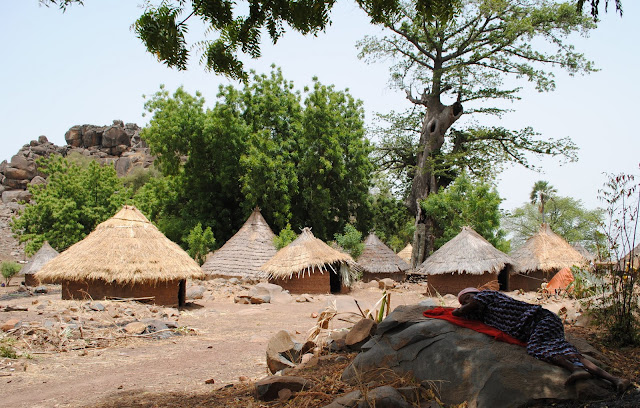 The reason behind this division into three groups is not clear. Few linguistic differences can be found between them. Apparently the Nyolo were one people with the Biwol, but during a war against the Peuls, they fled to hide in the mountains to the north and have been there ever since.

In fact, one reason cited by the Bedik for continuing to live on the plateaus long after the abolition of slave-raiding is to protect their crops from errant Peul livestock.

Economy
The Bedik people were traditional hunter-gatherers.  However, they are now engaged in semi-nomadic economy. The keep livestock such as goats, chicken and cattle. The Bedik farm the rough terrain atop the plateaus.

Cattle graze, surrounded by huts in the middle of the Bedik tribe village of Iwol, Senegal.

© Mr. Janis Miglavs
Although many Bedik, who number only a few thousand, have begun to move down from the plateaus to send their children to school and cultivate more land, their villages remain important cultural centers recently added to the UNESCO World Heritage List including ethnic Bassari villages to the west and historic Peul villages to the south around Dindefello.

Bidek Socio-politcal structure and culture
Bedik girls' unique hair styles are characterized by one big plait on top of the head and several small plaits on the side.

Aluminum rings and multicolored pearls adorn the plaits. Their ears are pierced with several holes, and each hole carries a ring of various colors. The nose is also pierced and decorated with a porcupine pin. On each wrist a young lady wears at least five bracelets.

The boys also wear distinctive adornment. Once circumcised, each boy begins to wear an earring and a knife at his waist. They claim the knife is not for defense, but as a working tool.

If a Bedik boy loves a young girl, he must obtain a kola nut, a calabash, and a handmade cloth two meters long and bring all these things to the girl's family. If the girl and her family are not interested, they will return everything in a couple of hours. However, if the family keeps the presents, this means that the girl loves him, too.

The boy now has to prepare a dowry for his future in-laws: $50, one cow, one sheep, and one goat. Once accepted by the girl's family, the wedding ceremony will unite the two families and also the two villages. The bridegroom provides enough millet wine to satisfy all who attend. After the wedding, the girl's family will go back home and leave their daughter with her husband "for better, for worse".

The Bedik people eat mainly food based on millet accompanied by leaves from a baobab tree. They seldom use oil in their food. Rice is prepared when there are visitors.

Visitors are always served separately. The Bedik people rarely use sugar in their food. They raise poultry, sheep and goats, but they sell them rather than using them for their own consumption.

The Bedik people drink millet wine, especially in times of ceremonies, like weddings. They also drink bissap, a drink based on sorrel flowers. They put hot pepper in it, and drink it without sugar.
The Bedik people are very respectful to their elders. Birthright is strictly respected. In Bedik society, the elders are always given first priority.
When hunters return with their game, for example, they give the elder first choice before sharing the game with the others.
During village meetings, the men sit by age groups. No young man would be bold enough to sit down among the elders.

Religious belief
The Bedik people traditionally believe in dialants, a heap of small stones near a wall or tree, where sacrifices are made and prayers are said regularly.

Few Bediks are Muslim. When asked why, they reply that the main reason is the dominant presence of Fulbe people in Islam.

The Bedik and Fulbe peoples do not agree, because the cows, the sheep, and the goats of the Fulbe graze in and trample the fields of the Bedik farmers. Consequently, most of the Bedik people reject Islam and are more open to Christianity. 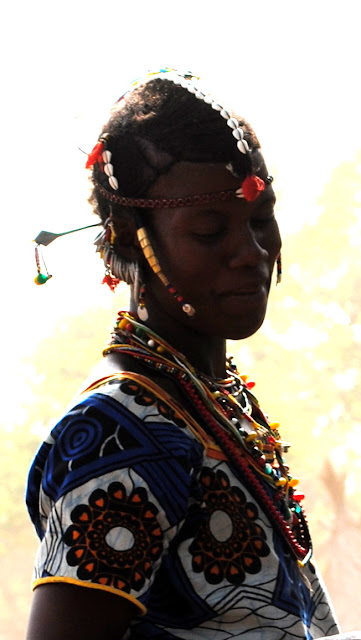 Bedik Mask
Carol Beckwith is a photographer who has spent much of her life documenting the traditions of Africa.
"The Bedik masks have a marvelous, almost elephant-like, tree fiber face. Surrounding this are perhaps a thousand leaves that are attached onto a large body costume, so what you're seeing looks like a bush coming out of the sacred forest." 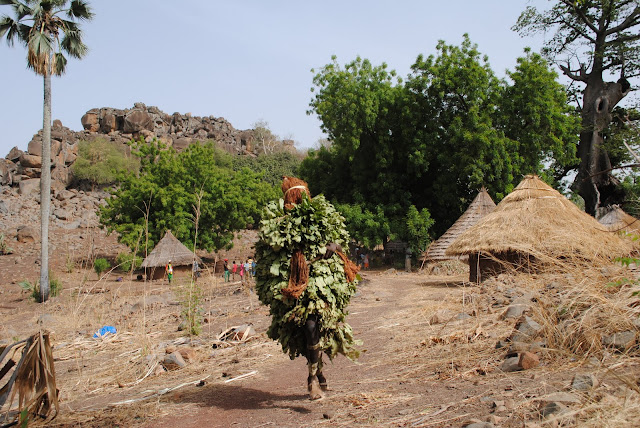 Bedik tribe initiate in a mask. by stayinggroundedontherun

According to the Bedik people, the sacred forest is the home of these spiritual masks, who come out of the forest to bless the crops. The members of the secret masking societies are the only ones allowed to enter the mystical groves where the masks dwell. 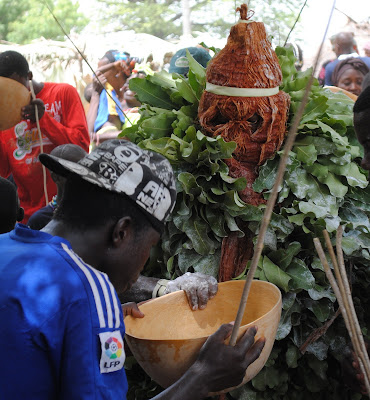 "Their role is to enter all of the houses, to go into every nook and cranny of the village, and make sure that there is nothing evil or negative that could impact in a bad way the agricultural activity that's soon to take place."

A Bedik girl wearing traditional beadwork, necklaces, and earrings in the village of Iwol, Senegal, Africa. 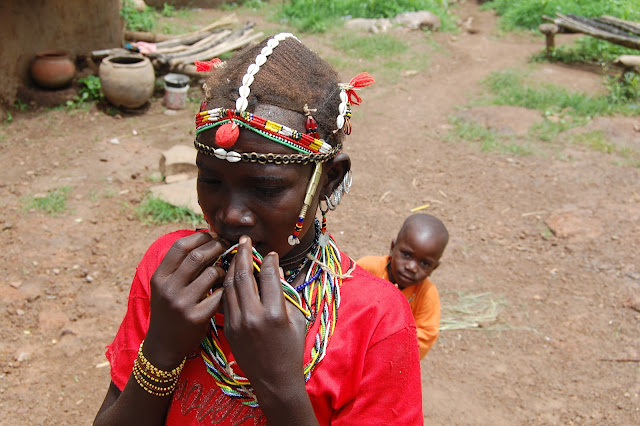