The Antankarana people are agro-fishery Malagasy-speaking people of mixed Austronesian, African and Arab ancestry, living in the north of Madagascar around Antsiranana (Diego Suarez). Antankarana literally means "Those of the Rocks," referring to the limestone rock formations (tsingy) and mountains which characterise their territory up until the Sambirano  river, which forms the border in the south.

The Antankarana polity was first established in northern Madagascar in the late seventeenth century when members of a royal dynasty, fleeing internecine troubles to the south, arrived in the Ankarana region and decided to stay. The loosely organized assemblage of descent groups already inhabiting the region accepted the retreating royalty, and, more importantly, recognized the ascendancy of their leader, serving him, his family and his ancestors.

Language
Language
The Antankarana speak several dialects of the Malagasy language, which is a branch of the Malayo-Polynesian language group derived from the Barito languages, spoken in southern Borneo.

History:
The Antankarana people started settling in the far north of Madagascar in the 12th century. The Antankarana were originally members of the Sakalava  people that separated to form a new tribe up the Madagascar Peninsula.

They had a peaceful settlement and  under the reign of their king Tsimiharo I they formed a separate kingdom with Ambatoharanana as their capital.

In the 19th century the Merina tribe invaded the northern kingdom of Antankarana. The Antankarana people were defeated in this invasion and were in danger of being wiped out. They therefore hid in caves for over a year to ensure their survival. The Antankarana sought help from the Arabs living on the coast. The Arabs offered them protection if they would convert to Islam. The majority of the Antankarana converted to Islam but continued their worship of their ancestors.

After the effective survival of the Merina peoples invasion, the Antankarana people brought their royals back to rule them. Today, the Antankarana royalty continues to rule, although their power is merely symbolic and mostly concerned with keeping traditions alive.
It must be noted that, as a result of the past Merina tribe invasion, majority of Antankarana people still continue to reject anything they consider to be Merina which includes the Merina people, language and religious beliefs.

Economy
The Antankarana peoples` economy is that of agro-fishery. Some live as coastal fishermen, but in the interior the villagers harvest rice and raise cattle, as well as grow crops on a small scale. Others work in factories and do other work in towns.

Rice, fish, greens and beans make up the majority of their diet. They typically don’t work the ground (farming or mining) on Tuesdays so this is often a good day to gather groups of people together.

Festivals (Tsanga-tsainy)
Tsanga-tsainy is the most important ceremony celebrated every five years. Therefore a large mast with emblems of the people symbolising their unity and support of the monarchy is erected. The festival is dominated by singing and dancing accompanied by sacrifices and prayers.

The tsakafara ritual is celebrated each year on a date predicted by a soothsayer. At the tsakafara people ask their ancestors for support and assistance in future projects, such as house building, business plans etc..
The duration and time of a tromba depends on the matters to be solved. At a tromba the spirits of the late kings are called upon and will appear to give advice through a possessed person.

Although the term ‘Antankarana’ is generally employed as an ethnonym,referring to a group of people, it is actually more of a locative —a name refer-ring to a particular place. Translatable as ‘of Ankarana’, when applied to agroup of people it is a designation applicable in its most literal sense to the inhabitants of the region surrounding the limestone massif, called Ankarana(‘the rocks’), that dominates the landscape of the Mahavavy River plain of northern Madagascar. In current usage, however, the term refers to muchmore than just this. It is frequently invoked, for example, with reference to a monarchical polity with deep historical roots in the Ankarana region —a usage that casts ‘Antankarana’ people as those who accept this polity and the moraland political orders that emanate from it. Construed a different way, ‘Antanka-rana’ is the name given a single tribe or ethnic group, indigenous to the Ankarana region and characterized by a unique complex of linguistic traits, taboos and,especially, customs —an interpretation that suggests the frequently promoted. (Allen 1995; Deschamps 1959 ), though often criticized (Domenichini 1989; Esoavelomandroso 1989), view that Madagascar’s population is divisible into 18 or 20 identifiable tribes or ethnic groups.
These different perspectives are not those of classifiable insiders and outsiders, nor do the collectives they suggest correspond neatly to what Richard Jenkins might respectively call a ‘group ... rooted in processes of internal definition’ and an ‘externally defined category (1994:200, my emphases)

To suggest such simple distinctions presupposes a singular, identifiable boundary between inside and outside and ignores the significant degree to which internal processes such as self-definition and ‘external’ forces such as categorization have been interrelated throughout history in northern Madagascar. More appropriate, for the purposes of this paper, would be to compare these different ways of construing the term to the different ways in which Malagasy speakers might translate the English pronoun ‘we’. Unlike English,the Malagasy language offers communicants two ways of referring to a collective of which they are a part. Employing the first, ‘atsika’, implies that the communicant and his/her intended audience are members of the same category while employing the second, ‘zahay’, implies the opposite.
Thus, while telling a house guest that ‘we/ atsika are going to eat now’ invites them to join a meal, telling them that ‘we/ zahay are going to eat now’ hints that they may have overstayed their welcome. These pronouns, atsika (the inclusive ‘we’) and zahay (the exclusive ‘we’), correspond nicely to the models of identity reckoning introduced in this paper. When employed as the subjects of statements, they suggest collectives (of which the communicant is a part) established according to the sort of inclusive and exclusive models discussed in the following sections. (ww.academia.edu/586522/What_Makes_the_Antankarana_Antankarana_Reckoning_Group_Identity_In_Northern_Madagascar) 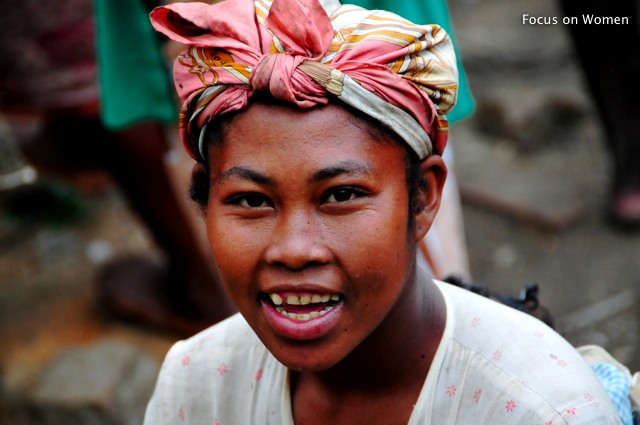