The Karo, also known as Kara are a small tribe with an estimated population between 1,000 and 3,000. They are closely related to the Kwegu tribe. They live along the east banks of the Omo River in southern Ethiopia. 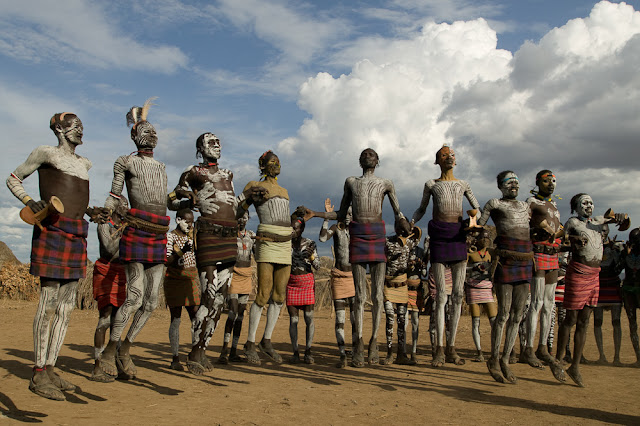 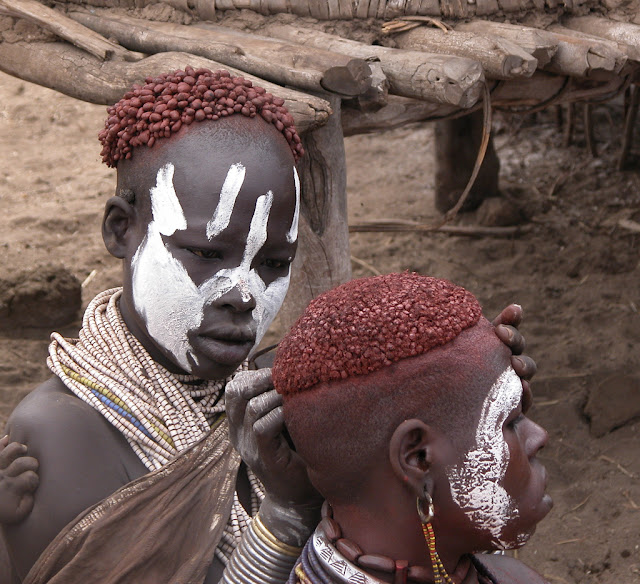 Karo people and their hair care

They are surrounded by relatively wealthy and strong groups, in terms of cattle and population size. Karo, whose neighbors especially the Hamar (to the South East ) ,Bana (to the east ),Bashada (to the East ), the Mursi (to the North)and Nyangatom (to the west across the Omo river ) know them by the name Kara, speak a south Omotic language. 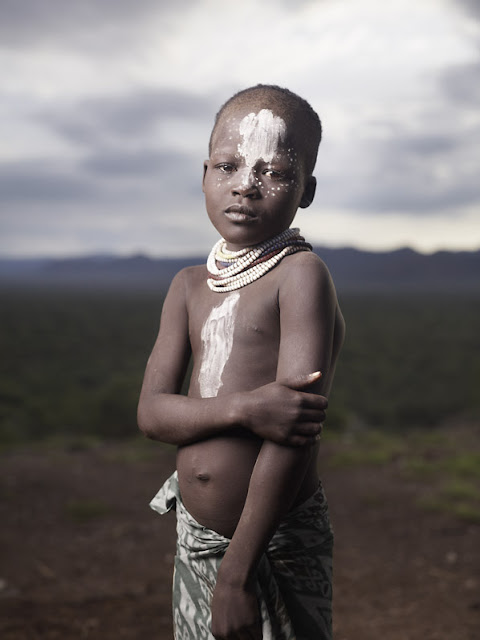 The main subsistence crops of the Karo are sorghum ,maize and beans .They are also supplemented by bee-keeping and more recently fishing. They plant fields using rain, flood retreat and river bank cultivation but the most important source of grain production is river bank farming than the other two which is carried out both along omo river and on the shores of Lake Diba.

The Karo used to have big ,magnificent houses when they were rich in cattle but after they have lost their wealth through tsese fly they adopted the much lighter conical huts of the Bume.

Karo woman and her baby over Omo River,Ethiopia

Every karo family own two houses-the conical shaped Ono which is the principal living room of the family and the flat roofed Gappa which is the center of several house hold activities.

The Karo have Muldas- kind of gate having "Y" shaped wooden posts up on which are placed horizontal wooden pars. There are -Dus,Korcho and Labuk.
The most striking thing about Karo people's symbolic and ornamental expressions is the painted body and face decorations. 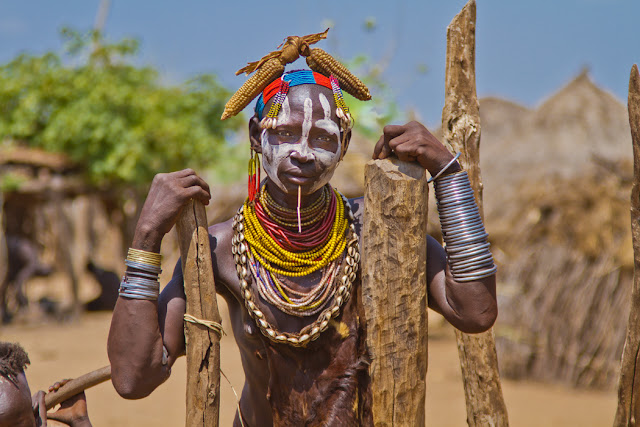 This is an elaborate process, which ranges from fine and elaborate details to rough, but striking paintings traced with the palms or fingers. The most beautiful expression is in the facial and chest paintings that combine white (chalk), black (charcoal), yellow, ochre, and red earth. They often imitate the spotted plumage of a guinea fowl.

Karo woman with a beautifying tribal marks on her chest

Karo woman scarify their chests to beautify themselves .For the women of the Karo tribe in southern Ethiopia, beauty is literally skin deep. During childhood, girls allow their elders to cut scars onto their stomach. Scars are cut with a knife and ash is rubbed to produce a raised welt. 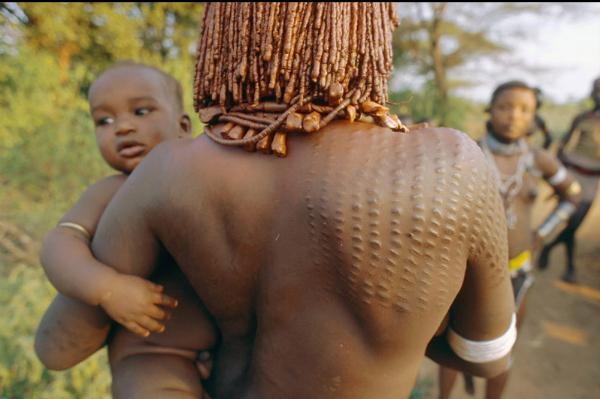 "The main reason for my scars is to attract a male that will give me joy, because I will be beautiful and hopefully get a husband," says one girl during her Taboo interview. 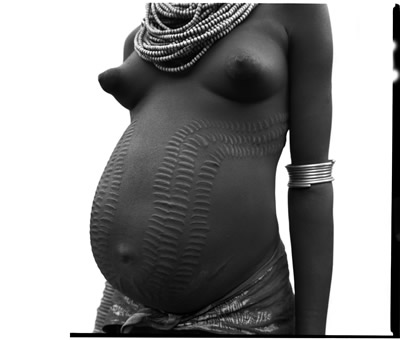 Once a Karo girl has received the last of her scars, she's allowed to marry and have children.
The complete scarification of a man's chest indicates that he has killed an enemy or a dangerous animal. The scars are cut with a knife or razor blade and ash is rubbed in to produce a raised effect.

The wearing of a grey and ochre clay hair bun also indicates the killing of an enemy or a dangerous animal. Both forms of decoration carry the same symbolic meaning for the Karo as they do for the Hamar. 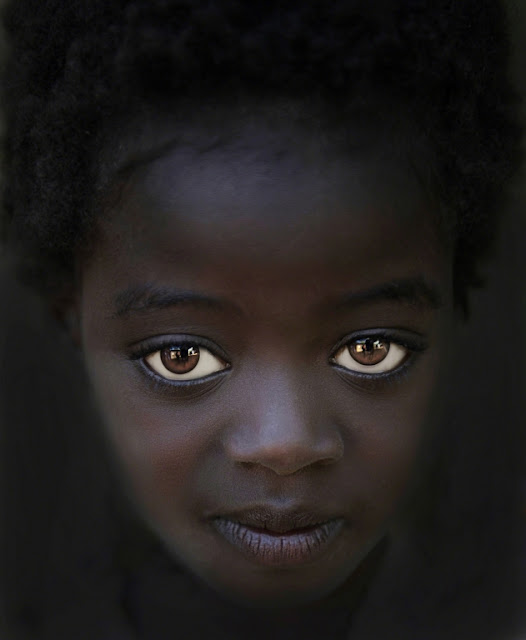 Karos practice ritualized infanticide or Mingi (killing by putting dirt in their newborn children's mouths and leaving them to die). The Karo tribe kills infants born out of wedlock as that is seen as dire abomination and an unpardonable shame to ones family. 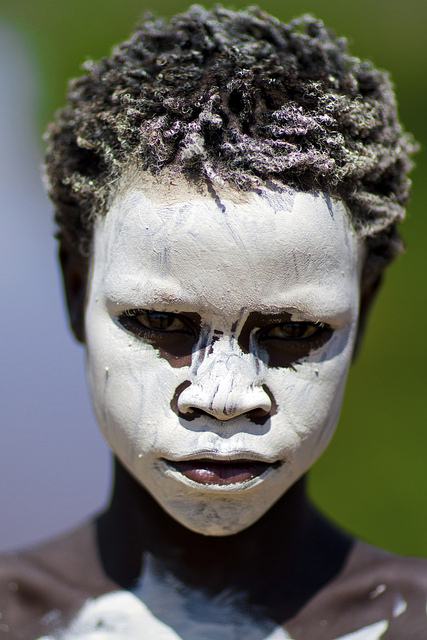 Karo boy at Korcho,Ethiopia with an awesome facial painting

Infants conceived out of wedlock are abandoned in an isolated places. The child may either die out of dehydration or get killed by a beast if not found by non-tribesmen.

At the end of the harvest and at times of initiation and marriage, the Karo come together to enjoy dances. During the moonlight dances, the Karo men leap joining one another in long lines towards the women, who come forward one by one to select the man whom they favor. 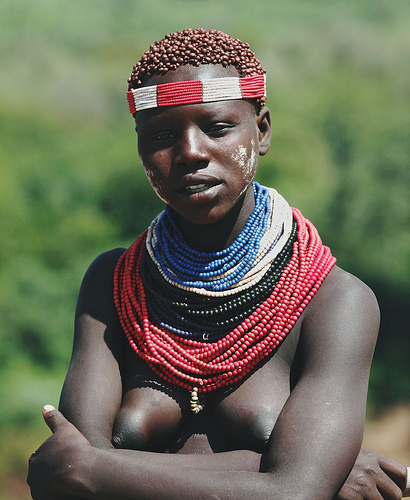 Afterwards Karo man and women, coupling themselves, perform rhythmic and pulsating dances, thrusting their hips one against the other in the dusty atmosphere of early evening

. These dances often lead to marriage after the initiate has successfully accomplished. A Karo man may take as many wives as he can afford, but usually he marries only two or three. 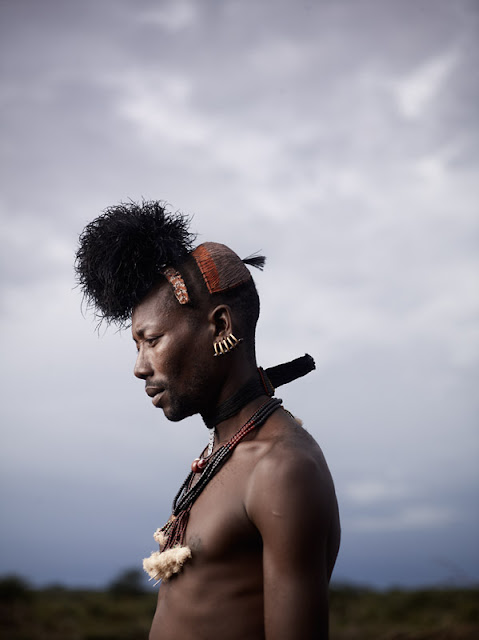 Outa Vri is a warrior of high status, having assisted in a raid upon the Daasanach for killing a friend's family member. He shows his status with a clay headpiece with ostrich feather, and will eventually obtain scarification across his chest. The number of earrings worn in one ear indicate his number of wives.   Hamer Tribe, Lower Omo Valley, Ethiopia

The pilla (the Jumping of Bulls) is one unique cultural manifestaion the visitor shouldn't miss.

Karo tribe woman and her baby over Omo river,Ethiopia

They gather on the flat land outside Duss Village and dance with the men on one side and the women on the other at the beginning of a ceremony that will go on for many months. Bull jumping in the Karo tribe only happens once in a generation and here only four bulls are jumped over by the jumpers. The mothers of the bull jumpers wear ostrich feather headdresses.


The Karo tribe is known for their expertise in body paint, facemasks, hair, etc. But what all Karo women (and men) share in common are scars. Dozens of scars line their stomach and chest – for men, it’s the chest only. When Karo daughters are young, their grandmothers and mothers cut their stomachs with a knife. Then, ash is rubbed into the wound in order to irritate it. This essentially creates an enormous welt that leaves a scar like the ones shown above.

Both men and women also paint their body to be attractive. 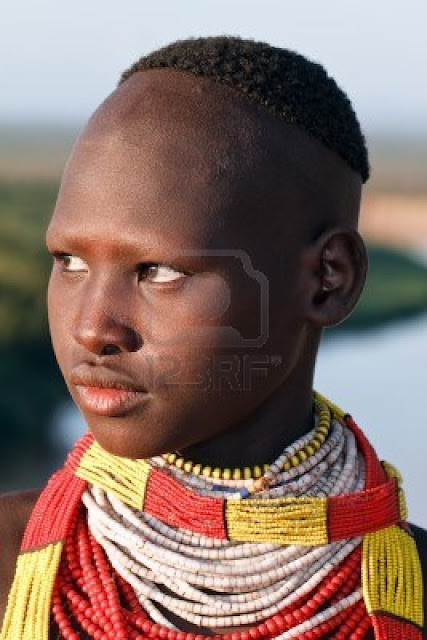 'Little Karo Bandit' The Karo tribe lives at the lower Omo River, at Oromia South Ethiopia. This boy came from out of the bushes. You can see the brown river in the background. | Image and caption © Mama Africa Photography ~ Yvon de Bruijn 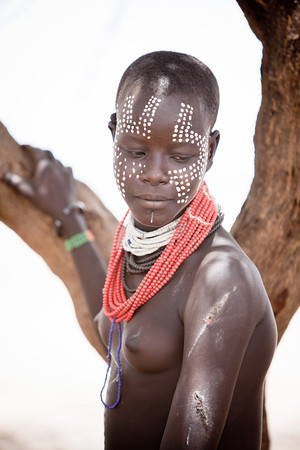 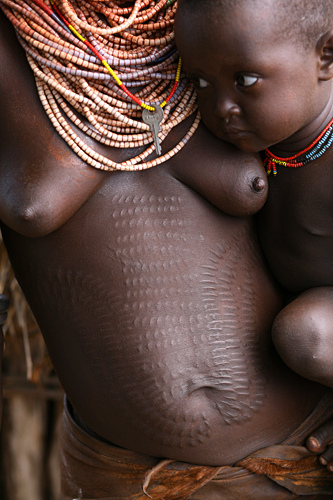 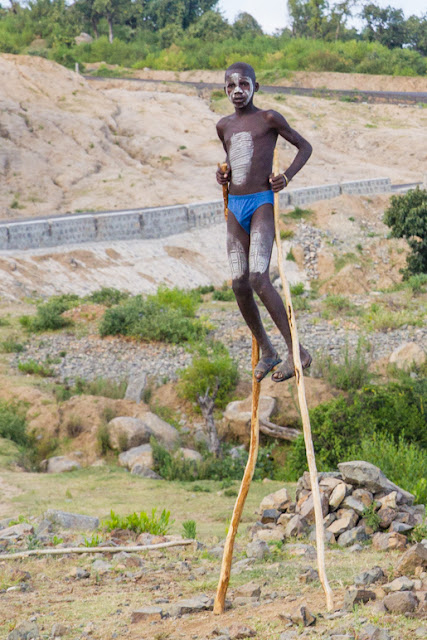 Karo boy on a stilt 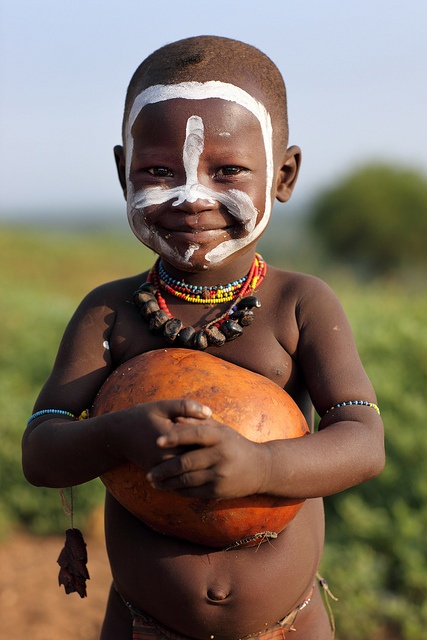 Karo girl showing the beautification marks on her stomach 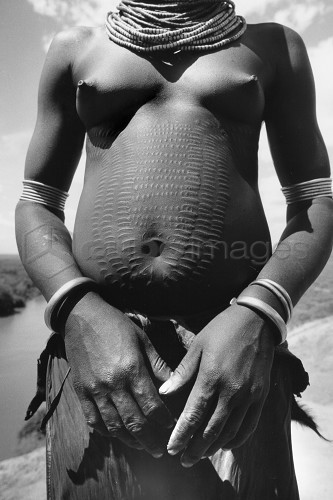 Karo boy standing on a fallen tree over Omo River

Karo tribe`s woman and her child

Portrait of a Karo child with the Omo River in the background. Omo Valley, Ethiopia | © Michael Sheridan. 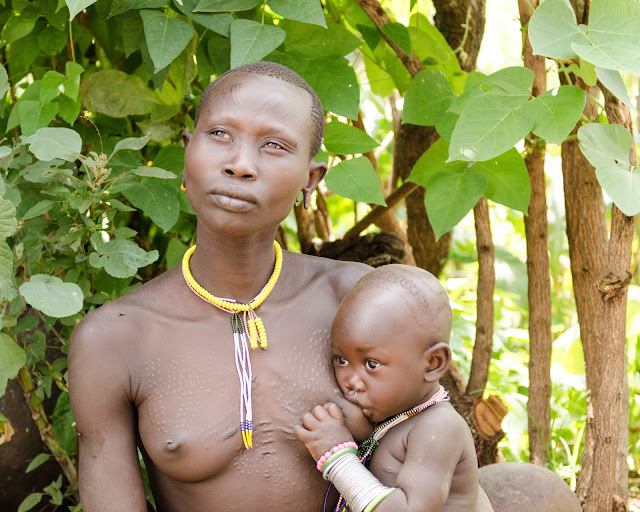 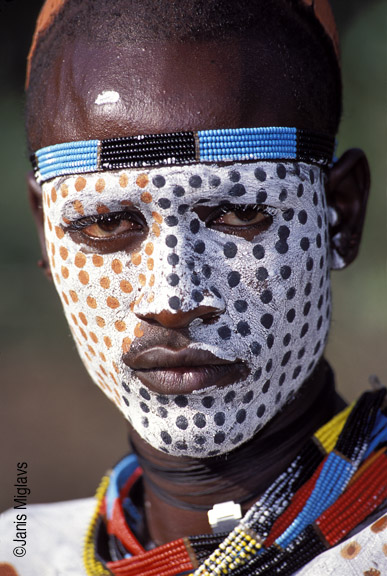 Karo woman and her kids 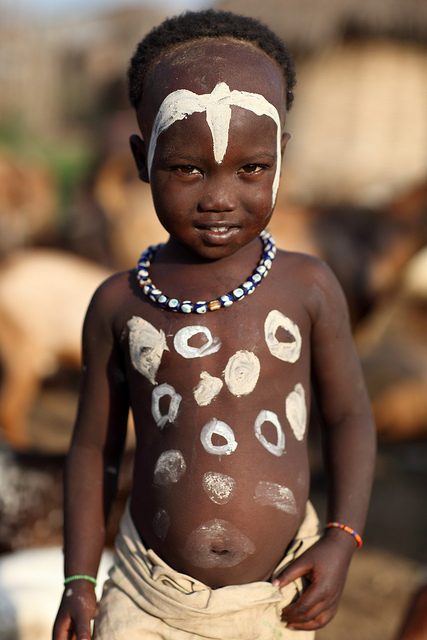 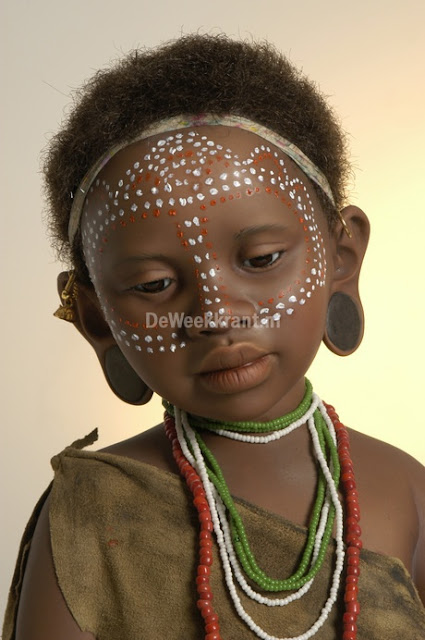 Sefi belongs to the Karo tribe in southern Ethiopia. They are masters of body and face painting. They use white chalk, charcoal, yellow, ocher and red earth. Handmade porcelain doll by Bets van Boxel 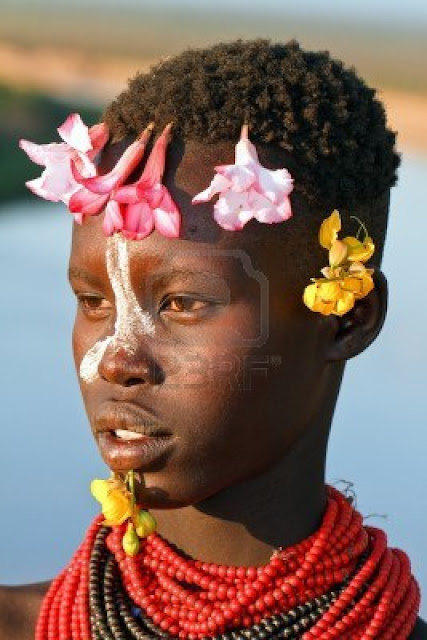 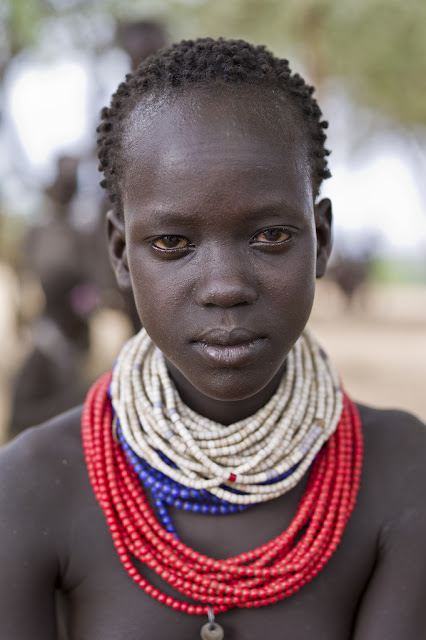 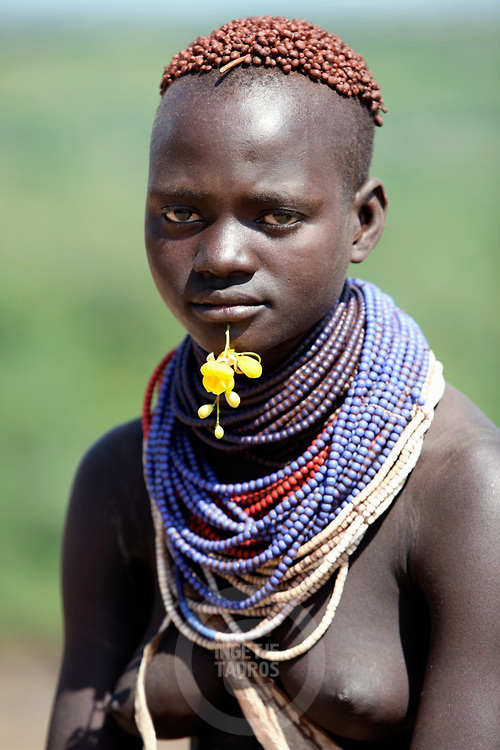 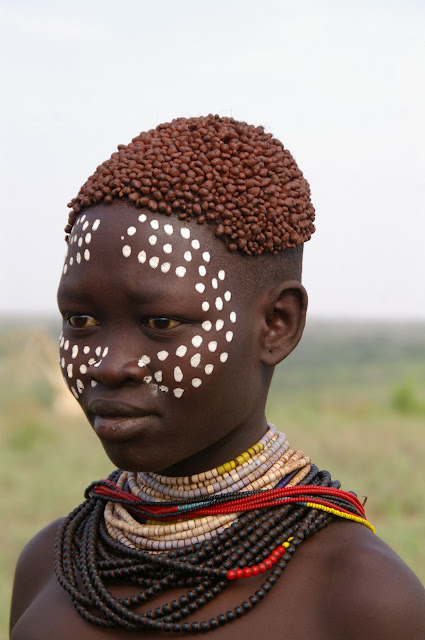 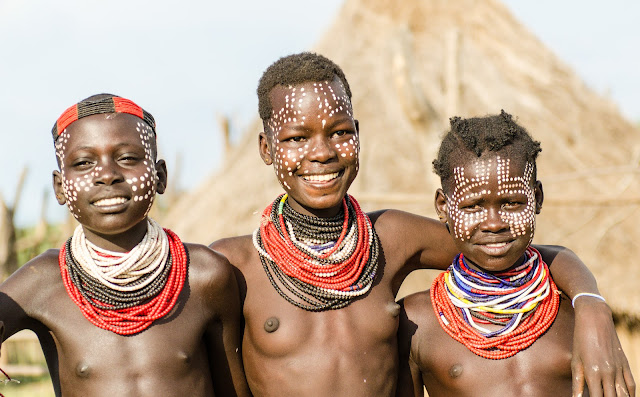 Karo man and his child 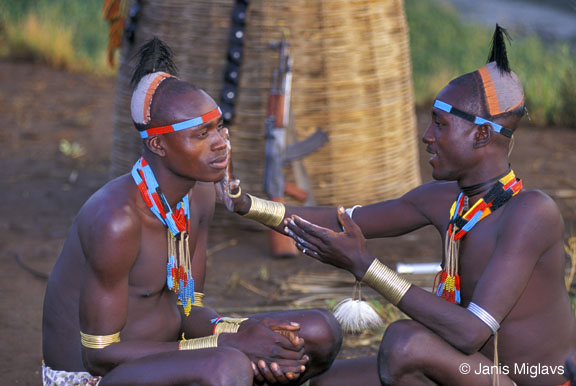