WILLIAM ANSAH SASREKU (SESSARAKOO): THE AFRICAN PRINCE FROM GHANA WHO WAS SOLD INTO SLAVERY IN BARBADOS BUT GAINED HIS FREEDOM AND BECAME A CELEBRITY IN LONDON

William Ansah (or Unsah) Sessarakoo (1736–1749), also known as William Ansa Sasraku  was the brilliant, gentle and artistic son of a wealthy Gold Coaster (Ghanaian) and African trader who was treacherously sold into slavery in Barbados by a British ship captain. He is best known for being released from slavery in the West Indies and taken to London, where he became an instant celebrity gracing the palaces and artistic centres. 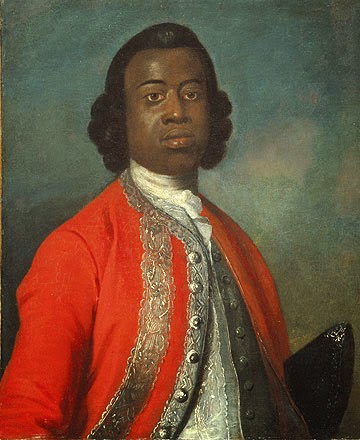 
Wlliam Ansah Sessaraku (Sasraku) who is known to British historians as "African visitor to Britain", was born in 1736 at Anomabu on the Gold Coast of West Africa. He was the son of Enu Baissie Kurentsir (known to the European traders as John Bannishee Corrantee) and his wife, Ekoubah, daughter of Ansah Sasreku, king of Akwamu. Obrafo Kurantsir (John Corrantee) was the head (caboceer or braffo) of one of the most prominent extended Fante families living near the British factory (trading post) of Anomabo, one of several British factories along the Gold Coast. Corrantee (Kurentsir) was the principal and wealthy Anomabo trader in gold and slaves. Like other contemporaneous African leaders Corrantee (Kurentsir) forced Europeans to compete with each other for his trade.
As man of foresight and intellect,  Kurentsir sent one of his sons, known to the English as Lewis Banishee (Lewis Baissie), to France to be educated and to strengthen his commercial ties with French traders. According to Sessarakoo's (Sasraku`s) anonymous biographer who published "The Royal African, or, Memoirs of the Young Prince of Annamaboe" in London in late February 1749, Corrantee (Kurentsir) was nevertheless an Anglophile who styled himself an Englishman. He allowed his favorite son, Sasreku, to live in the British factory, where he learned to speak English and developed a love for England. The English traders at Anomabo gave Sareku ‘the Name of CUPID, as most expressive of his sweet and amiable Temper’ (see: The Royal African, page 37).
Taking advantage of Enu Baissie Kurantsir`s desire to send his son and a companion to Europe to learn European ways of business, to improve his trading prospects and to enhance his ability to play one European power off against another, a deceitful English slave-trading captain convinced Kurantsir to permit him to take Sasraku via Barbados to England to be educated and to strengthen Kurantsir`s economic relationship with France's main rival. The unnamed English captain betrayed Kurantsir`s's trust, however, by selling Sasraku into slavery when they reached Barbados in 1744. He was fortunately bought by a kind master. The captain who had sold him died soon thereafter, and when Kurantsir learned of his treachery he refused to continue trading with any English merchants. Although the treacherous captain had not been in the employ of the Royal African Company and to avoid diplomatic problems, the company promised Kurantsir`s to find Sasraku, redeem him from slavery, and return him to Anomabo via London in exchange for Kurantsir's resumption of trade.
In 1748 Sessarakoo (Sasraku) arrived with an African countryman in London, where he was put under the protection of the president of the Board of Trade and Plantations, George Montagu Dunk, second earl of Halifax. The two Africans quickly became celebrities, whose activities were noteworthy during the more than eighteen months that they spent in London. They were introduced to King George II. The Gentleman's Magazine included in its February 1749 issue a brief history of Sessarakoo's life, reporting that he and his fellow African ‘prince’ were being clothed and educated ‘in a very genteel manner’ (89–90). Their education included lessons from ‘their Dancing-master, Mr. Lalauze’ (London Gazetteer, 5 April 1749). Sessarakoo was treated as foreign royalty, referred to as the ‘royal African’, the ‘Prince of Annamaboe’, and ‘Oroonoko’. The General Advertiser announced on 2 February 1749 the staging of Thomas Southerne's 1695 tragedy Oroonoko at the Theatre Royal in Covent Garden ‘for the Entertainment of the Two Young Africans’. Southerne's play was based on Aphra Behn's 1688 novel of the same name about the noble African Oroonoko, whom a treacherous English captain betrayed into slavery. The Whitehall Evening Post, or, London Intelligencer (2–4 February) reported that when the Africans:
"came into the Box, the polite Audience (true English) received them with a loud Clap of Applause, which they each of them acknowledged by a very genteel Bow, and took their Seats … the Distress of Oroonoko, his meeting with his Imoinda, the Account of his barbarous Usage, all combined to raise in their youthful Bosoms such Sentiments of Humanity, that Tears, those Types of generous Minds, flowed plentifully from their Eyes: The Royal Youth, indeed, could stand it no longer, but retired at the End of the Fourth Act, and returned again to the Entertainment, when the Fifth was over; his Companion remained, but was the whole Time drowned in Tears, which seemed to have such a sympathizing Effect on the Audience, that few there were but joined him."
The two Africans also saw several comedies performed at the Theatre Royal in March and April 1749. On 23 March 1749 Horace Walpole wrote from London to Horace Mann in Italy: ‘There are two black princes of Anamaboe here, who are in fashion at all the assemblies, of whom I scarcely know any particulars, though their story is very like Oroonoko's; all the women know it—and ten times more than belongs to it’ (Walpole, vol. 2, 265–6).

The biography of Sessarakoo (Sasraku), which saw a second edition in April 1749, was widely advertised in London newspapers and magazines. Its positive depiction of the Royal African Company may have been intended in part as a response to the growing criticism of the company's legal monopoly of the African slave trade, which was challenged, for example, by A Detection of the Proceedings and Practices of the Directors of the Royal African Company of England, since their First Establishment by Charter in 1672, to this Present Year 1748, also published anonymously in February 1749. The Royal African Company was dissolved the following year and replaced by the Company of Merchants Trading to Africa. The baptisms of Sessarakoo (Sasraku) and his companion in the Church of England on 30 November 1749 were noted by the Gentleman's Magazine. Sessarakoo's life inspired William Dodd in July and August 1749 to publish a fictional poetic correspondence between the prince and the lover he supposedly left behind in Africa. Gabriel Mathias painted Sessarakoo's portrait in 1749. A mezzotint engraving in 1749 by John Faber the younger after Mathias's portrait includes a brief biography of Sessarakoo. The Gentleman's Magazine published an engraved portrait of Sessarakoo in June 1750.
Sessarakoo left England for Anomabo on 14 August 1750 aboard HMS Surprize, under the command of Captain Patrick Baird. He did not reach Anomabo until 6 April 1751 because Baird stopped to inspect British factories on the African coast along the way. Sessarakoo met John Newton off the coast of Sierra Leone on 24 November. Newton was in command of a slave-trading vessel. Sessarakoo made a strong impression on the future hymn writer and abolitionist: ‘Mr William Ansah Setarakoo, one of the African princes, as they were stiled in England, who is on his passage to Anomabo in the Surprise, came on board with me, and spent the evening with me very much to my satisfaction, being master of a great deal of solid sense and a politeness of behaviour I seldom meet with in any of our complexion hereabouts’ (Newton, 19). When Sessarakoo arrived at Anomabo his father replaced his elaborate English dress with African attire. To curry favour with his father, as well as in recognition of Sessarakoo's exemplary behaviour and education, John Roberts, governor-in-chief of all the British factories maintained by the Company of Merchants Trading to Africa on the Gold Coast, immediately hired Sessarakoo as a writer, or clerk, for the company. His status was acknowledged by his name, William Ansah, always being included on the list of white, rather than African, employees of the company, though he was always listed last and identified as being ‘black’. He also served as a spy for the British, reporting on French activity at Anomabo to the earl of Halifax. He died at Anomabo of unknown causes on 30 April 1770.