Beverly Johnson (born October 13, 1952) is a famous American model, actress, and businesswoman. Backed by Eileen Ford at the powerful Ford Models, Johnson made history when she rose to fame as the first black model to appear on the cover of American Vogue in August 1974. 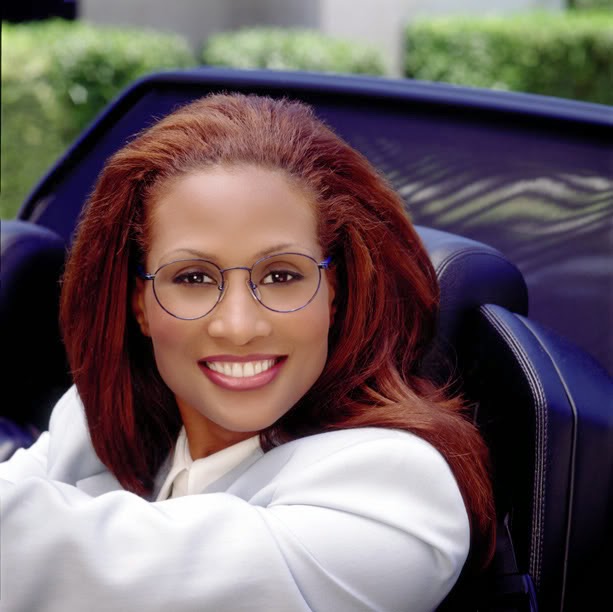 Beverly Johnson, supermodel and the first black model to appear on the cover of American Vogue in August 1974

A year later, she became the first black woman to appear on the cover of the French edition of Elle. Beverly scored thousands of editorial pages in hundreds of magazines and hundreds of advertisement campaigns. And she walked the runways for the biggest fashion houses in the business on both sides of the Atlantic. 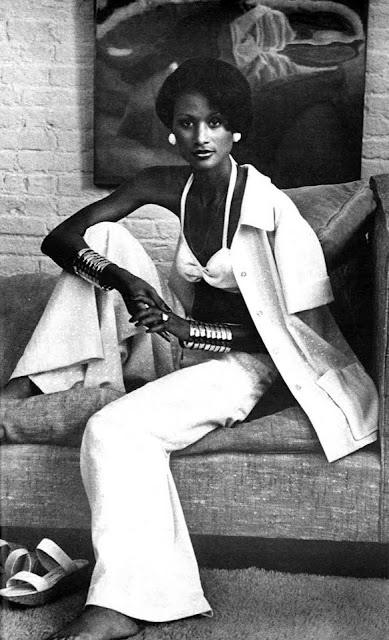 According the famous fashion photographer Francesco Scavullo “Beverly Johnson is one of the most beautiful women I’ve had the privilege of photographing.” It was Scavullo who immortalized the model with a history-making cover in August 1974: It was Johnson’s first for the magazine—and, more to the point, the first time a black woman had ever taken that prized position on American Vogue. “I didn’t know it would be so profound,” she later said. “I just wanted to be on it, because that’s where you had to be to be a top model. I didn’t realize the significance and change we were embarking on—black women being accepted. Afterwards I knew.”

August 1974  Portrait of Beverly Johnson in wool-angora cardigan by Kasper and Bulgari diamond loop earrings. It was this photograph that ushered Beverly as a first black woman to grace the cover of Vogue. Image by Francesco Scavullo Conde Nast Archive

It must be emphasized here that the first black supermodel in the world was Donyale Luna, a Detroit girl who stunned the fashion world  to became the first black model to grace the cover of  UK Vogue in March 1, 1966 cracking the color barrier that offered a window of opportunity for Beverly Johnson to emerge.
Over her career Beverly Johnson graced over 500 magazine covers, including 15 Glamour, Cosmopolitan, and French Elle.

As one of the highest-paid models in the world at the time, she transcended racial barriers with her work on the runway for Halston, Yves Saint Laurent, Ralph Lauren, Calvin Klein, and Valentino.
She acted as a spokeswomen for Avon cosmetics in the late seventies and continued to branch out - publishing an advice book in 1981 and later moving to Los Angeles to pursue an acting career.

She is an addictive role model to the most African-American and African models and was pleased to see 'much more ethnic diversity' appears in fashion industry. Johnson who received tons of advice from her mentor and successful black model Naomi Sims at the beginning of her career has always given a helping hand to new entrant black models. 'I remember driving Naomi Campbell to jobs and Tyra Banks, and even Iman when she first came from Africa,' said Beverly Johnson in an interview to The Guardian.

In 1995 came her first successful foray into the cosmetics business: the Beverly Johnson Skin Care System and was followed in 2012 by the Beverly Johnson Hair Collection, created for Target.
Ms Johnson's daughter, Anansa Sims Patterson, followed her into the fashion industry as a plus-size model.
The two appeared together on the reality show Beverly's Full House, which ran for eight episodes on the Oprah Winfrey Network last year.

Beverly Johnson Posing for Cosmopolitan in 1976

Johnson was honored in 2006 at Oprah Winfrey's Legends Ball along with Coretta Scott King, Rosa Parks, Tina Turner and other female African Americans in entertainment, civil rights, and the arts. The New York Times named Johnson one of the 20th century's most influential people in fashion. Given the success of her 1990's wig line, she has been a leading influence in hair care, especially among women of color. Her company now sells luxury hair extensions.

Johnson was born and raised in a middle class household in Buffalo, New York. Her father was an electrician, and her mother a surgical technician. Growing up, Beverly was—like so many Vogue swans claim—not just tall but awkward. “My little sister was the beauty. She had all the boyfriends,” she told The New York Times Magazine in 1975.

Johnson was a champion swimmer in her youth and aspired to be a lawyer.  She claims “I was into sports.” She often brought home medals from swimming championships, and, in 1968, nearly qualified for the Olympics in the 100-yard freestyle. After graduating high school in 1969, she left Buffalo to enroll at Northeastern University in Boston to study political science; planning to become a lawyer. She soon decided, however, that criminal justice wasn’t going to be her future. With the encouragement of friends—and over the objections of her father, who, she later recalled, thought that “modeling was just a soft word for prostitution”—she set out for Manhattan to pursue a career in fashion.

Beverly Johnson and her daughter Anansa

An insider got her an interview at Glamour. “I came to the city with my mother, my little white gloves, and my hair in a topknot, and met with the editors,” she told Vogue in 2009. “Then Alexander Liberman—Condé Nast's editorial director—appeared, calling all the shots, and by the end of the day I had my first assignment.” Still, despite having booked a glamorous ten-page spread, Johnson was rejected by every modeling agency she approached. So she opted for plan B: working as a salesgirl by day at a Manhattan store called Jax and taking classes at Brooklyn College at night.

The agencies may not have been able to feel the seismic cultural shift that was happening under their very feet, but Liberman was. Glamour called back, and Vogue, too. Soon, the Jax salesgirl was appearing in fashion portfolios shot by Patrick Demarchelier and Irving Penn. These pages caught the attention of Eileen Ford of Ford Modeling Agency, who left Johnson a message: “I want to see you right away!”
Johnson quickly became nothing less than a defining face of the seventies, appearing on the front of more than 500 magazines, including Glamour, Cosmopolitan, and French Elle, in addition to Vogue. As one of the highest-paid models in the world, she transcended racial barriers with her work on the runway for Halston, Yves Saint Laurent, Ralph Lauren, Calvin Klein, and Valentino. “I see the inspiration of black women being lifted up all over when they look at me,” she told Newsweek, “and that’s a super feeling.”

Johnson’s face could be seen in television commercials for National Airlines, and in ads for Virginia Slims next to the tagline “You’ve come a long way, baby.” Her natural, wholesome look won her a spot as spokesperson for Avon cosmetics in the late seventies. And she continued to branch out. Her first advice book, Beverly Johnson’s Guide to a Life of Health and Beauty, appeared in 1981. Later, she moved to Los Angeles to focus on an acting career. (She has had roles in several feature films, including How to be a Player and Crossroads with Britney Spears, as well as appearing on hit television shows including Law and Order.) In 1995 came her first successful foray into the cosmetics business: the Beverly Johnson Skin Care System. It was followed in 2012 by the Beverly Johnson Hair Collection, created for Target.

“I was lucky to have been part of something that gave generations of African-American women a sense of belonging that we did not have until then,” she said in 2009. “With this privilege came responsibility.” Throughout her career, Johnson has been active in charitable endeavors, speaking out as an AIDS activist and working to stamp out sweatshops. Breaking color barriers, but also breaking ground as one of the first models to market herself well beyond the runway, she has been a trailblazer in more ways than one.

On a personal level, Johnson married real estate agent Billy Potter in 1971. They divorced in 1974. In 1977, she married music producer/publisher Danny Sims. Sims and Johnson separated in 1979 and later divorced. Their daughter Anansa was born in 1984.

Beverly Johnson on the Cover of 1976 Cosmopolitan magazine

Lists of films that Beverly Johnson had acting roles in it: 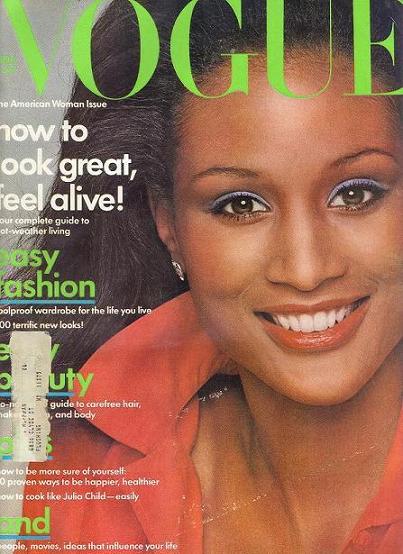 Model Beverly Johnson wearing a tweed sweater suit with long button-front cardigan, matching flared skirt and sheer ribbed pullover by Scott Barrie, with a hat by Don Marshall and envelope bag by I. Miller. Circa February 1974 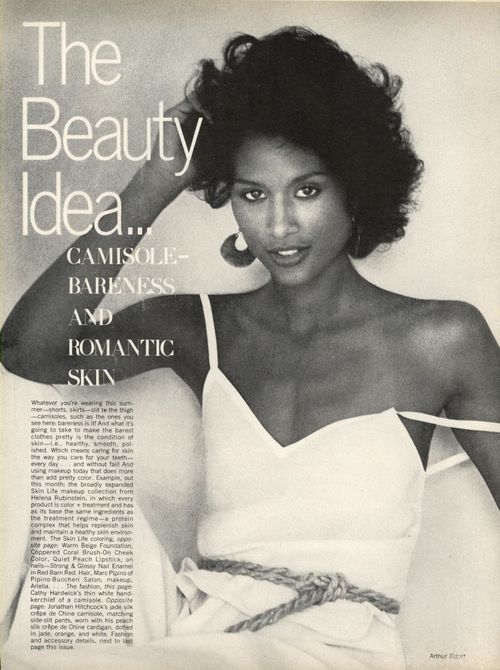 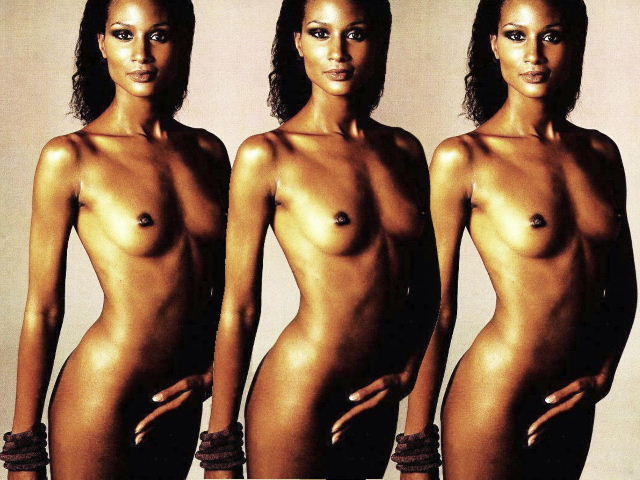