TSEMAY PEOPLE: THE ETHIOPIAN ANCIENT WARRIORS AND MOST FASHIONABLE TRIBE

Tsemay people also known as Tsemako or Tsamai, are an Nilotic ethnic group of southwestern Ethiopia.  They belong to the lowland East Cushitic family in which the Dassanatch and the Arbore are also part. 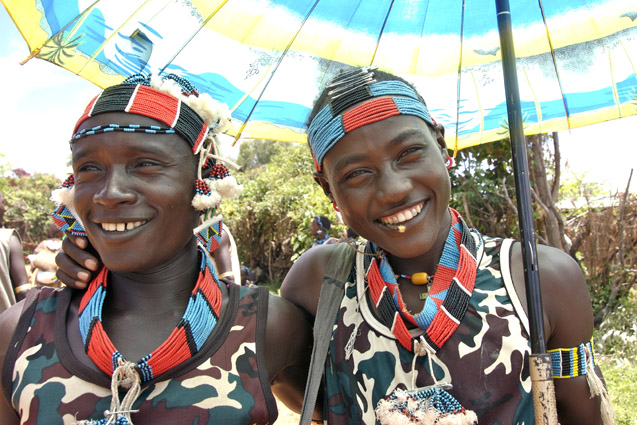 Most Tsemay live in the Hamer Bena woreda of the Debub Omo Zone of the Southern Nations, Nationalities, and People's Region, in the Lower Omo River Valley and just to the west of the Konso special woreda. They found specifically in the town of Weyto, which is approximately 50 km from the town of Jinka, on the Konso-Jinka road and North of Weyto river.

Tsemay people buying from a seller

Their neighbors include the Konso to the East, the Bana - Bashada group to the West, the Male to the
North, and the Arbore to the South. They speak an East Cushitic language called Tsamai, which is one of the Dullay languages, and thus related to the Bussa and Gawwada languages.

Tsemay woman and her child 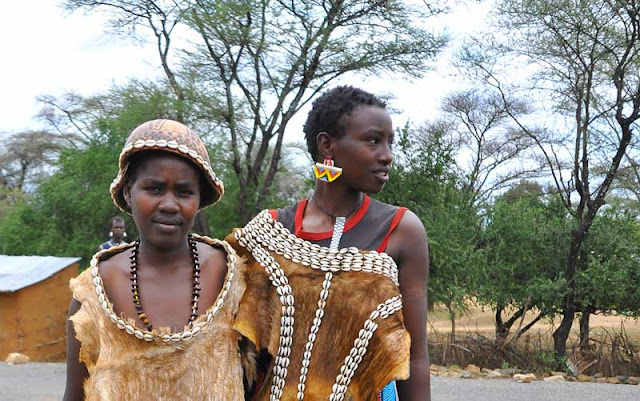 The Tsemay are predominantly followers of their ethnic religion which believes that the male and female star created the world. The origin of Tsemay people is told in a folklore. Ethiopian Folklore reciter Oyta Arro narrates that " There are nine tribes in Tsemay. They once had this incest, a mother with her son and father with his daughter (which was wrong) and there w
as no death.

But God one day said, “You have sinned with incest and you will be punished.”
So all diseases were created, such as lung diseases, and people began to die.
And then God gave nine girls each to the nine tribes which are included in the Tsemay nationality, and after that, people refrained from sin and lived happily."

Tsemay man with his goat in market - Ethiopia

The Tsemay are agro - pastoralist who used the banks of the Weyto River which is suitable for crop cultivation and other plantations like cotton. However, the Tsemay mainly grow sorghum and millet. They also engage in livestock herding like all the Omo Valley tribes.

Like the Hamer tribe, the Tsemay boys who wish to marry have to successfully complete a bull jumping event, a rite of passage ceremony.  This is a ceremony where the boy runs across multiple bulls.  If the boy can make it across four times without falling, he becomes a man.

Tsemay man with his herds

To prove a boy has accomplished a bull jumping, he is outfitted with a band that has feathers on it.  It is worn on his head and it shows that he is now looking for a wife. 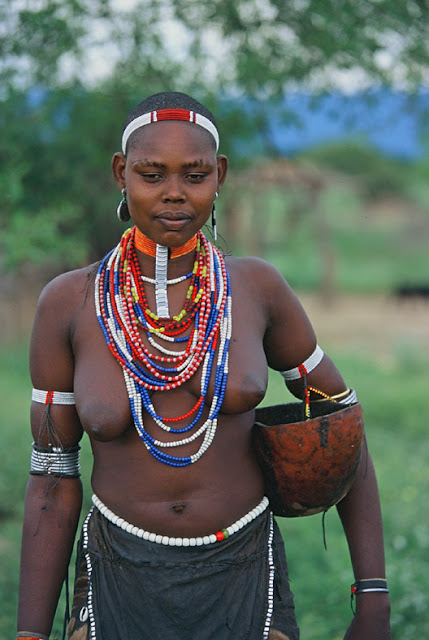 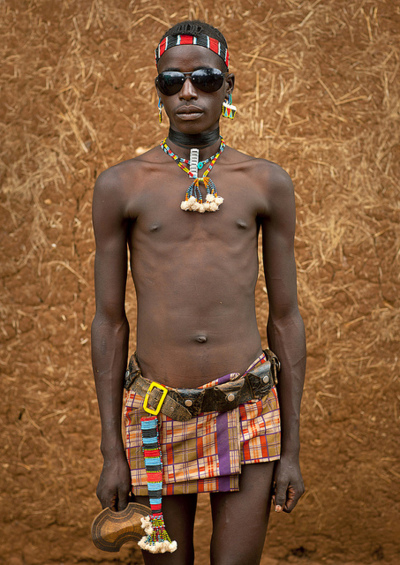 The Tsemay society, unlike most other people in rural Ethiopia, does not have a laid down custom, which emphasizes on the availability of girls virginity until their official day of marriage. In other words, a Tsemay girl, if she wishes to, can have a sexual partner with whom she can engage in premarital relations. However, Tsemay culture strictly prohibits the girls from bearing a child out of this relation.

Thus, in the Tsemay culture, the freedom to have a pre-marital sexual partner, does not necessarily guarantee the freedom to bear child, which in turn necessitates marriage. 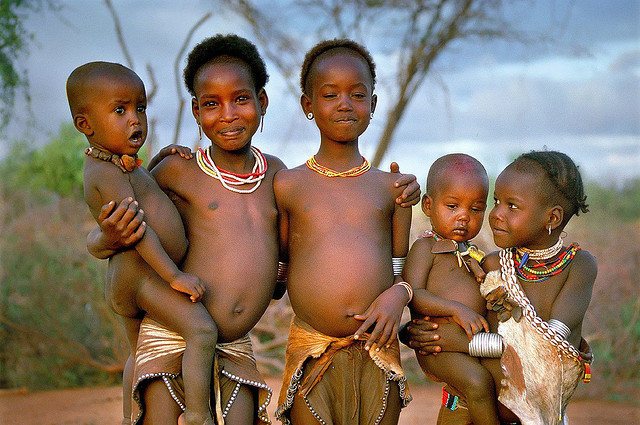 In the Tsemay land, marriage can be arranged with or without the will of the girl. Yet regardless of the consent of their daughter, her parents always take the binding decision of the matter.
Once her parents gave their approval, the bridegroom's parents are responsible for the preparation of the wedding feast. 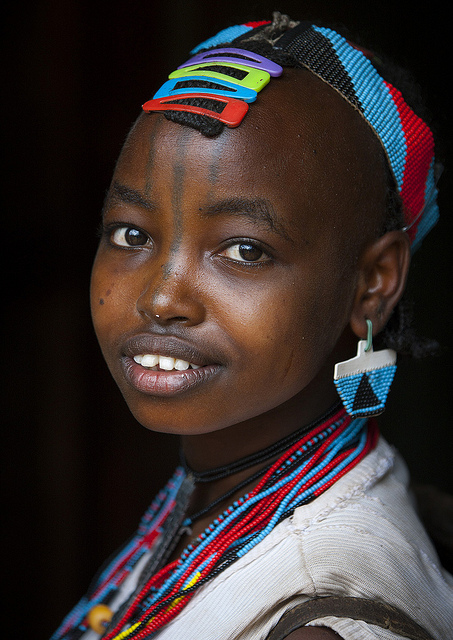 Tsemay bride's hands are not given to her husband. Instead, she is handed over to her parents -in-law. This takes place at the time when the bridal group is summoned to the party. According to the culture, until he is required to join the party, the bridegroom must not appear in the occasion.

During the wedding feast, the bride and the bridegroom shave and put butter on their heads. From this day on, the new couple is freed from any sort of obligation or work for the next six to twelve months.
Except their honeymoon time, Tsemay couples do not eat together at home from the same plate for the whole of their life.

Similar to other Omo valley people, the Tsemay are polygamous society, which follows the paternal line. They have regulations, which prohibit marriages between very closely related individuals. Traditionally inter marriage with the Benna is allowed. However, the union is always one directional. Thus, if there is any conjugal union between Tsemay and Banna people, it is always the case that a Tsemay woman marrying a Benna man, never the other way around. 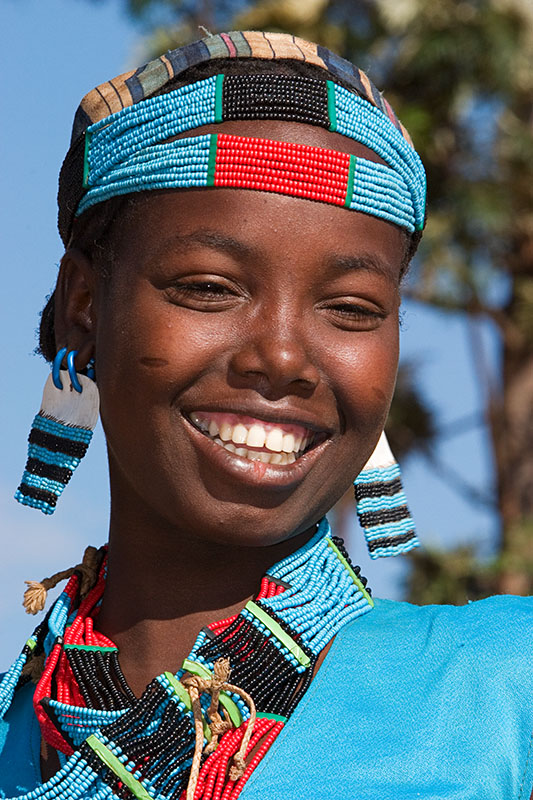 The traditional costume of the Tsemay women involves a leather outfit. While married women's leather apron is wide and can cover both sides of the legs, that of the unmarried is a short skirt with a long v-shaped leather apron which is only enough to cover the backs of the legs. 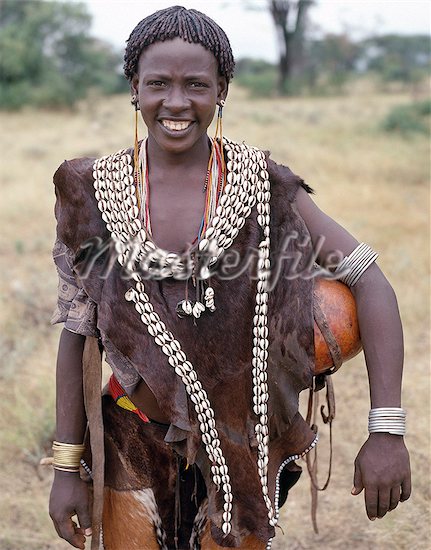 A woman of the Tsemay tribe of remote Southwest Ethiopia wears attractively
decorated leather clothes. Her hair is braided and smeared with ochre.

Although the major marriage payment comes in the form of livestock, other items such as honey, grain, clothes, coffee beans, bullets and 'arake' are also accepted. In order to get the hands of a girl, a Tsemay man must prepare all or most of the above items in abundance. Nevertheless, collecting this bride wealth is so hard for the suitor that he is usually helped by his closest kinsmen.

In this respect, the contribution of his father and his uncle(s) is immense. In the final analysis, it is her parents, not the bride, who are the real beneficiaries of this bride wealth. The justification given for this is that it is a return for all possible investments made in her upbringing. In addition, the bride wealth compensates for the loss of her labor and potential for reproduction. 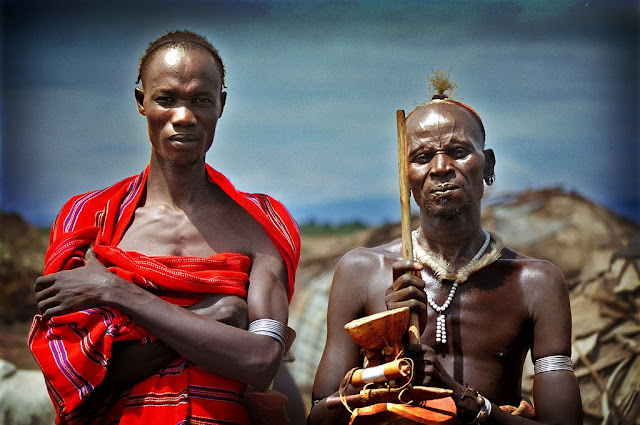 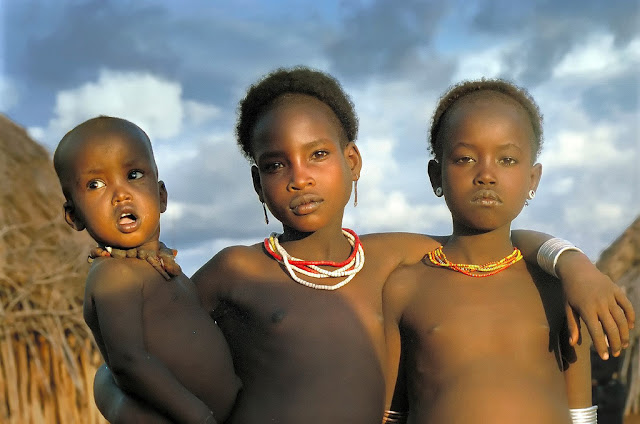 TSEMAY PEOPLE AND THEIR FASHIONABLE LEATHER DRESSES AND HAIRSTYLES 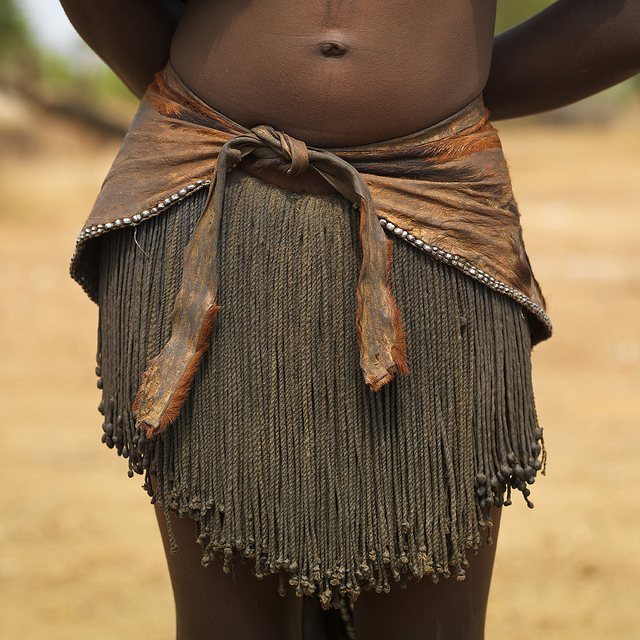 Tsemay traditional skirt - Omo Ethiopia. The traditional costume of the Tsemay women involves a leather outfit. While married women's leather apron is wide and can cover both sides of the legs, that of the unmarried is a short skirt with a long v-shaped leather apron which is only enough to cover the backs of the legs. 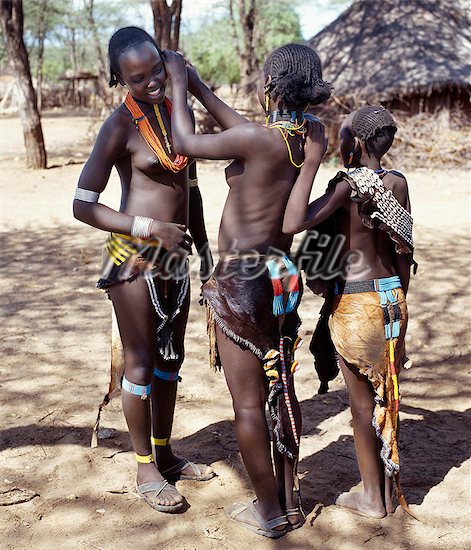 Tsemay girls in their traditional attire


Girls of the Tsemay tribe of remote Southwest Ethiopia wear attractively decorated leather skirts and aprons,and braid their hair in a number of different eye-catching styles.The Tsemay are a small tribe neighbouring the more numerous Hamar people with whom they share a common language. 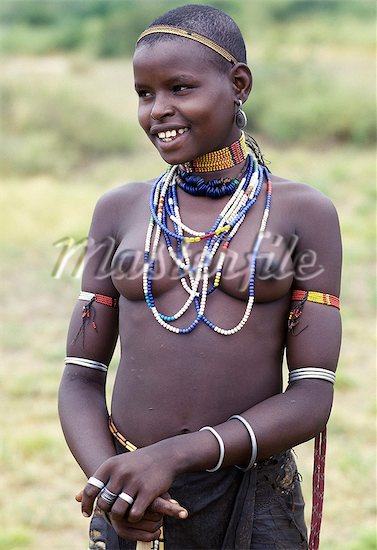 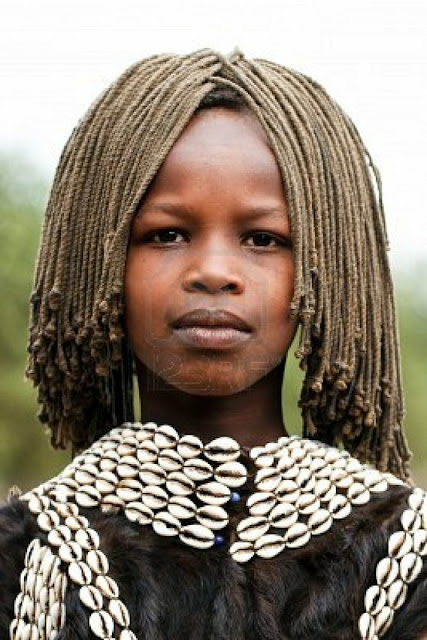 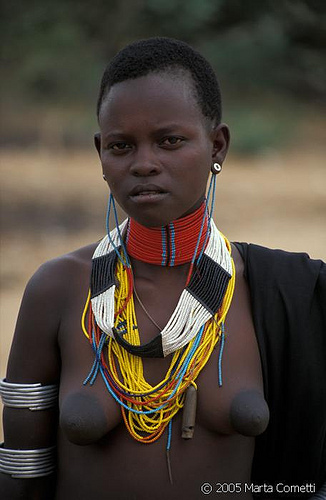 Tsemay girl with beads around her neck 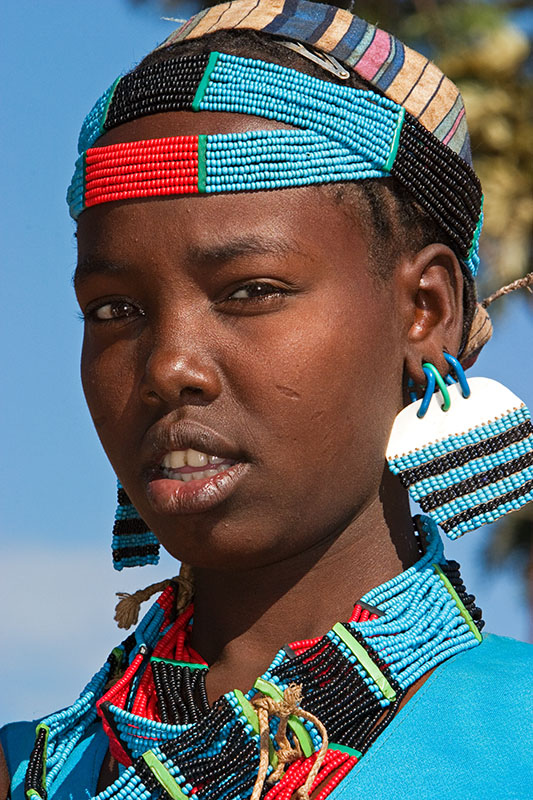 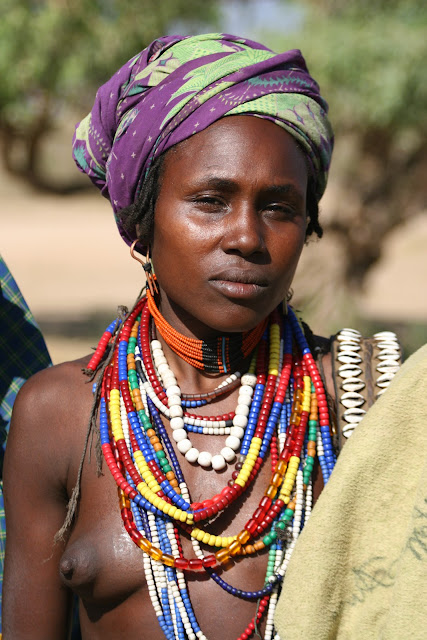 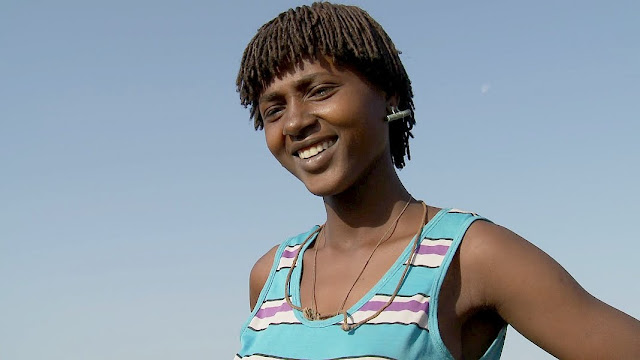 Tsemay girl carrying water on her back 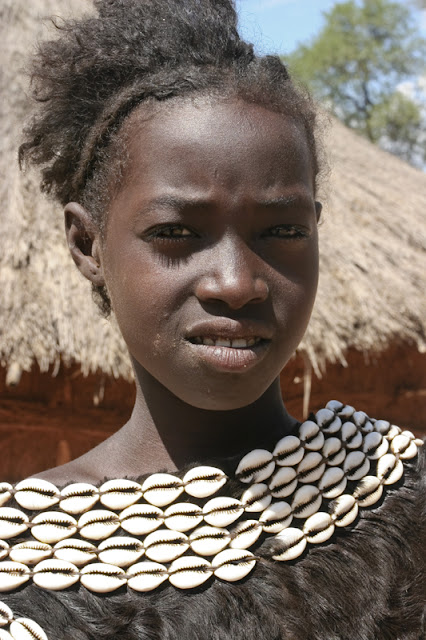 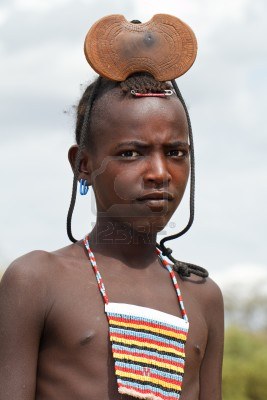 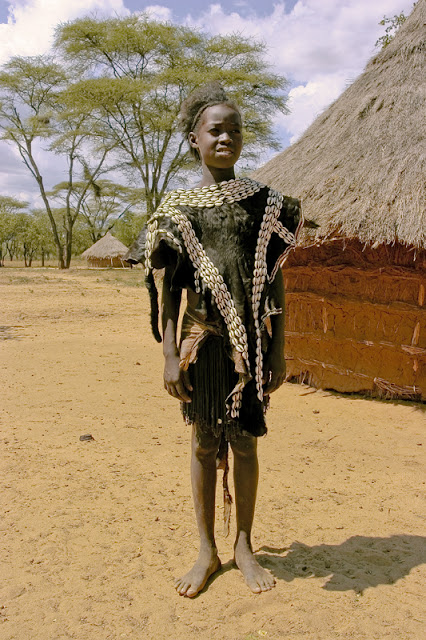 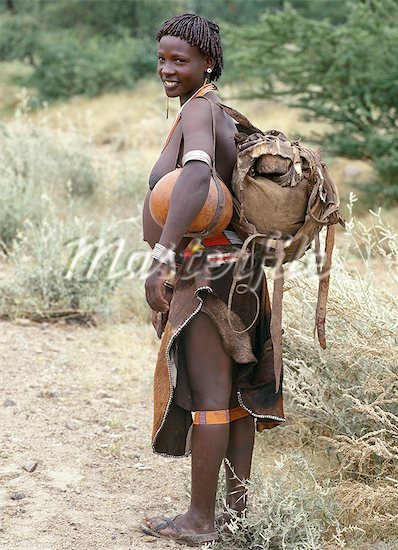 Tsemay tribe woman with tattoos on her face - Ethiopia

The boys also wear mini pants/shorts which are quite trendy. They are also fond of putting on complex hairstyles different from the other tribes.

Tsemay fashion for Men - Ethiopia.Many Tsamai men carry small seat around with them, which they use in case they need to sit down. 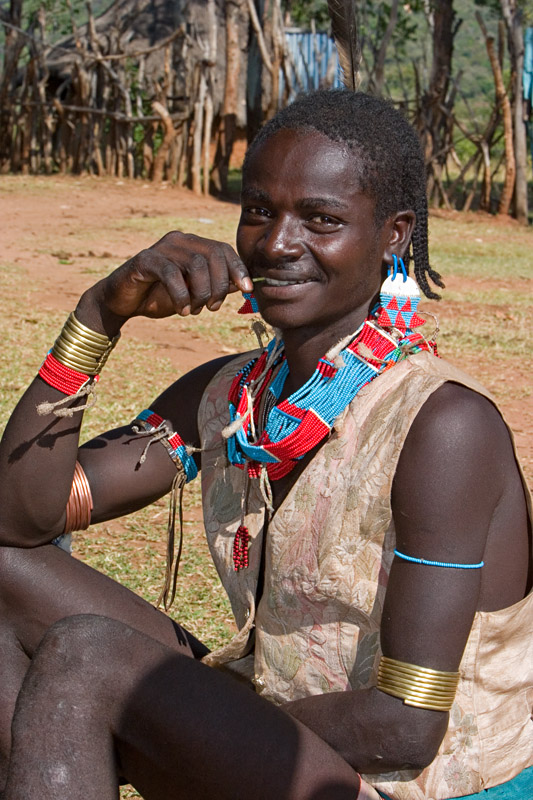 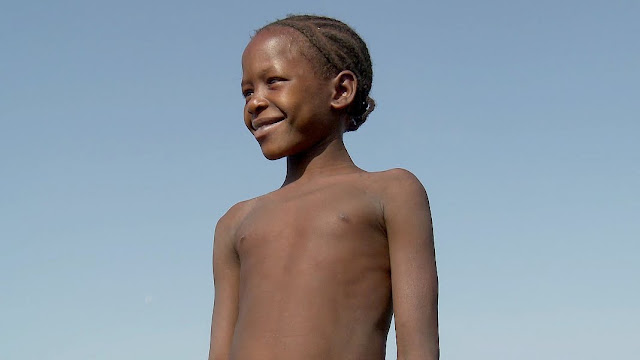 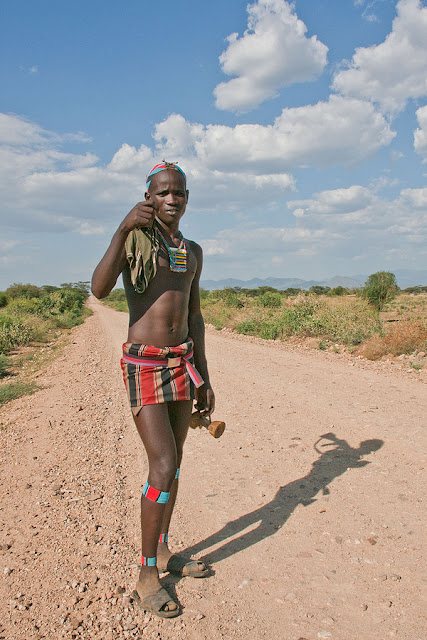 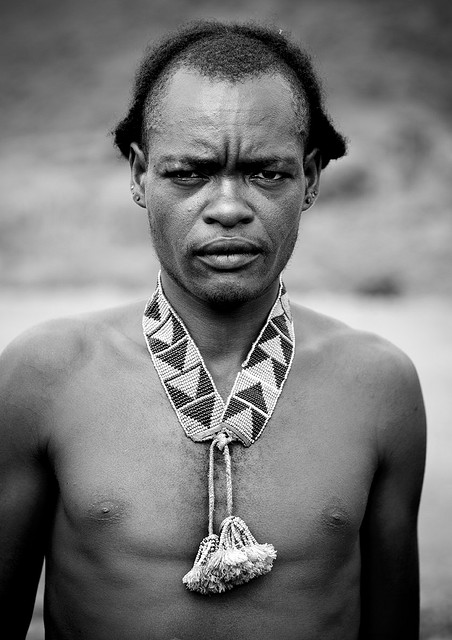