Robert Nesta Marley is the father of reggae. He was a philosophical musician who revolutionalized reggae music across the globe. his music saw many oppressed people in the world given hope, racial bigots were also given their fair share.
There are many photos of the reggae maestro but the one that hasn`t been seen much is the photo of Robert Nesta Marley`s marriage to Alpharita Constantia Anderson (now Rita Marley). 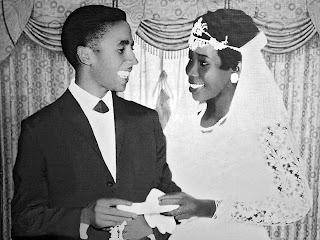 The legendary reggae maestro Robert Nesta Marley (not in dread-locks) exchanging his marriage vows with his bride Rita Marley 10th February 1966 at Kingston,Jamaica.