AJAK DENG: THE PRIDE OF SOUTH SUDAN AND DINKA PEOPLE WHO SUCCESSFULLY CHANGED FROM A REFUGEE TO SUPERMODEL

Angelique "Ajak" Deng is a South Sudanese-Australian supermodel. She is of ethnic Dinka extraction, former refugee and was one of the breakout stars of the SS10 Paris shows, booking Chloe, Givenchy, Jean Paul Gaultier, and Lanvin. Born in the Sudan, Ajak now calls Melbourne, Australia home.

Looking at Ajak, one would never question why she is taking the modeling world by storm. Towering at 6 feet tall, with legs and arms “for days”, this Sudanese beauty has become a favorite of designer Jason Wu and has scored major campaigns with United colors of Benetton, Top shop and Calvin Klein. But behind this stunning models success is a story of pain, fate and ultimately inspiration.

Ajak Deng was born in South Sudan in December 7,1989. She was forced to flee from her native country in 2002 with her family at the tender age of 12.  The Sudanese war -the reason for their fleeing- gripped the country from 1983 to 2005, leaving roughly 2 million dead and displacing hundreds of thousands more. 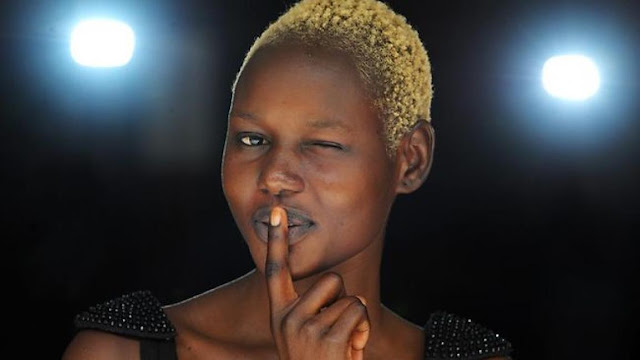 Ajak and her family were part of the “lucky” few that were able to find safety in a Kenyan refugee camp. But as is often the case in refugee camps due to the lack of resources, aid and medical attention; her mother contracted Malaria and died soon after.

Leaving Ajak’s father to care for her and her seven siblings on his own. Finding a way to immigrate to Australia, Ajak and her family received refugee status. Giving them hope as they moved into a new chapter in their life;  Ajak had the opportunity to resume her education and eventually enter the modeling industry that would change her life, and the life of her family…forever (Ajak_Vogue-Black)

Once she was in high school and in search of a part time job, Ajak began to “catch wind” that she should consider modeling. As she describes in the video “Fresh Face Ajak Deng” by Modelinia, when she would apply for jobs, all her prospective employers refused to hire her because they thought she should be a model.

Ajak Deng
So after doing a little research on the local modeling agencies in Victoria Australia, she walked into FRM Model Management  with a few pictures, no pretensions or expectations; and the hope that she would be able to “give her brothers and sisters everything they ever wanted” (www.hellobeautiful.com).

Dinka girl, Ajak Deng
Needless to say, Ajak was quickly snatched up by FRM. At Australia’s fashion week, she caught everyone’s attention and even had the international fashion community inquiring about who she was. Absolutely everyone was abuzz about this angel faced, bright eyed model, with an innocent and gentle disposition.

Beautiful Dinka girl, supermodel Ajak Deng
Ajak has since walked in fashion weeks all over the world, most notably for Louis Vuitton, Chloe, Givenchy, Oscar de la Renta, Jean Paul Gaultier and Lanvin. Though she is an extremely edgy-high fashion model, her smile lights up any photograph with an electricity, that marks an undeniable commercial appeal . With Alek Wek (the famous Sudanese model) slowly doing less and less modeling, Ajak seems first in line to take the spot of the iconic model!

Ajak’s story is truly inspiring, and reminds us that we are all called for a specific purpose in life. And though we may go through a period of pain and suffering, or have hopelessness with the possibility of change feeling intangible. We really never know when our fate will find us and set us on the path of fulfilling what we are born to do. Ajak was born to model, and watching her fulfill her dream when it seems all the odds were against her, is the ultimate inspiration. 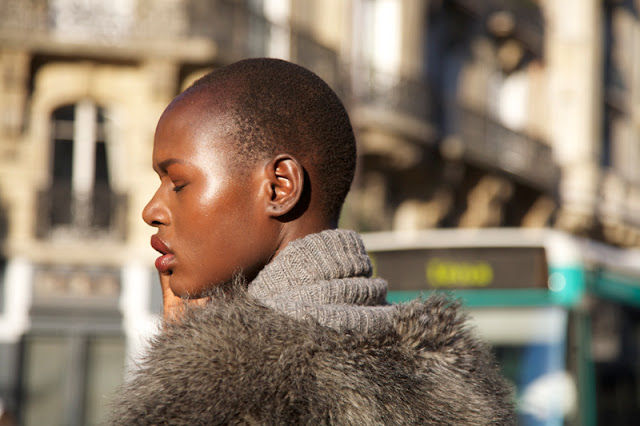 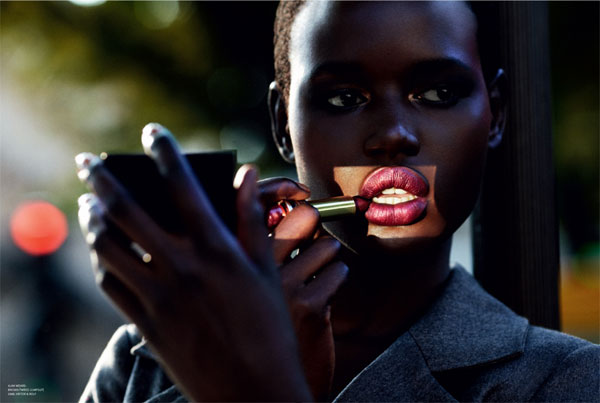 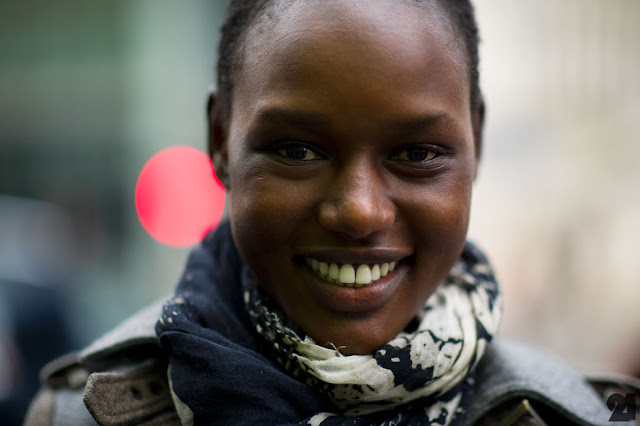 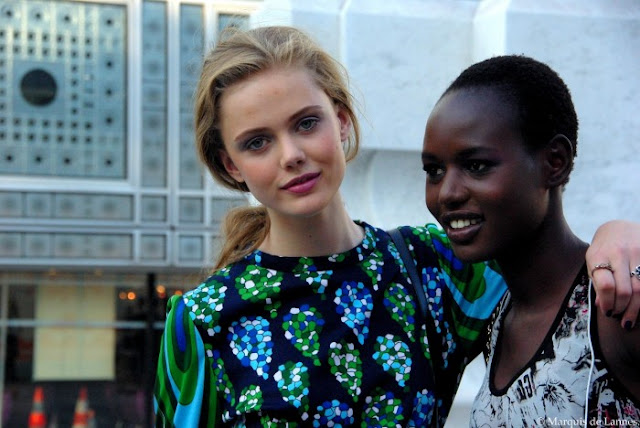 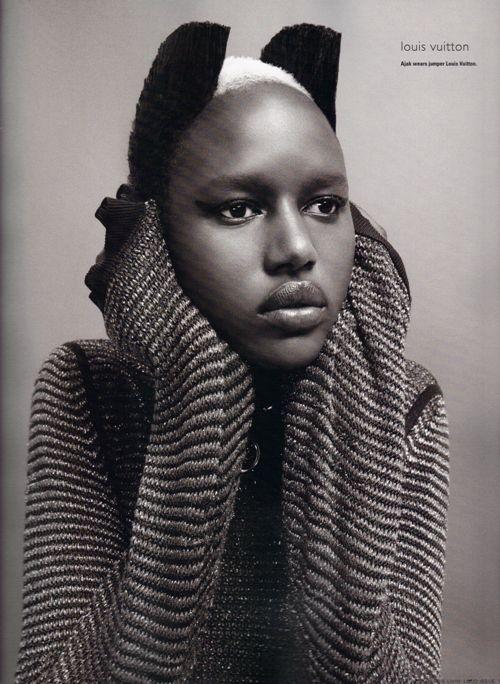 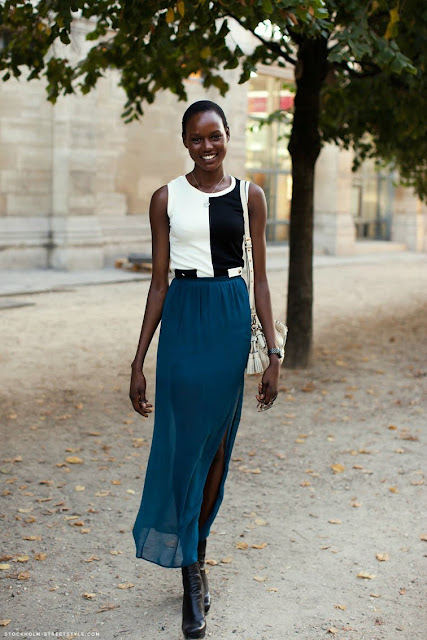 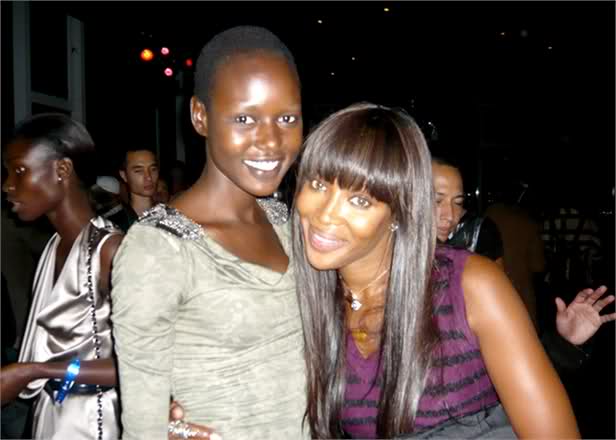 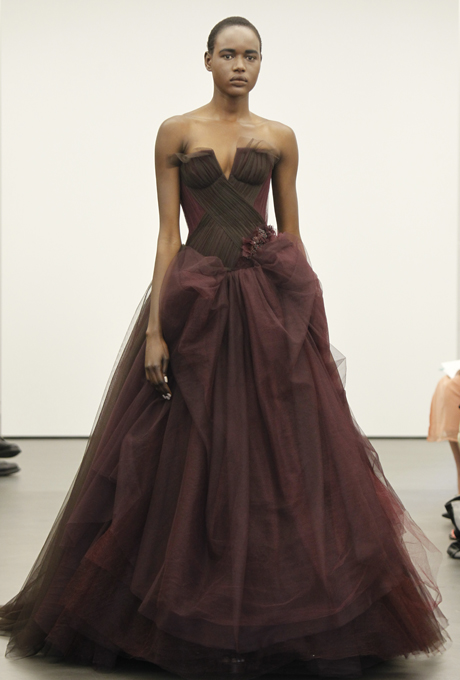 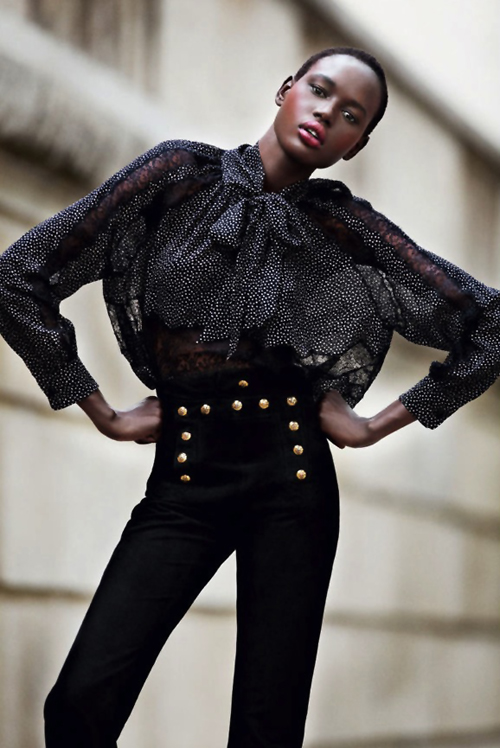