The name "Vanuatu" is an important aspect of national identity. Leaders of the Vanua'aku Party, which led the first independent government, invented the term in 1980 to replace the colonial name New Hebrides. Vanua means "land" in many of Vanuatu's one hundred five languages, and translations of the new name include "Our Land" and "Abiding Land."

Culturally, Vanuatu is complex. Some of the people follow matrilineal descent rules, while others follow patrilineal rules. Leadership on some islands depends on advancement within men's societies, and in others it depends on possession of chiefly titles or personal ability. Although most people depend on subsistence farming and fishing, the economy of the seaboard differs from that of interior mountain plateaus.

Political leaders have consciously cultivated national culture to foster a national identity, including political slogans such as "Unity in Diversity." Many rural people, however, are attached primarily to their home islands, while educated urbanites, refer to supranational identities such as Melanesian.

Location and Geography. Vanuatu is a Y-shaped tropical archipelago of over eighty islands, sixty-five of which are inhabited. The Solomon Islands lie to the north, New Caledonia to the south, Fiji to the east, and the Coral Sea and Australia to the west. The mostly volcanic archipelago extends 560 miles (900 kilometers) from north to south and has an area of 5,700 square miles (14,760 square kilometers). Espiritu Santo is the largest island. Port Vila, the capital, which was also the colonial headquarters, is on the south-central island of Efate. 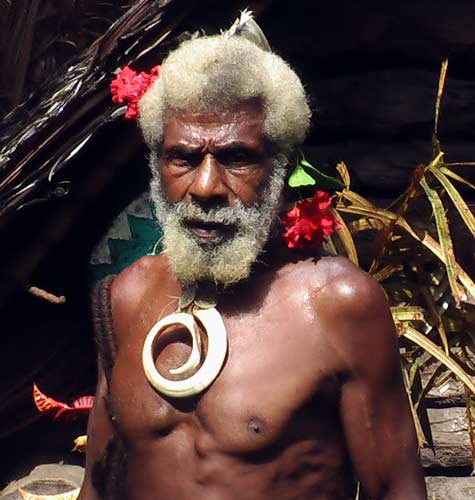 Demography. The 1997 population of 185,000 is 94 percent Melanesian, 4 percent European (mostly French), and 4 percent other (Vietnamese, Chinese, and other Pacific Islander).

Melanesian people
Linguistic Affiliation. Bislama, the nation's pidgin English which emerged in the nineteenth century, is essential for public discourse. Many aspects of the national culture are phrased in Bislama, which has become an important marker of national identity. Alongside Bislama, English and French are recognized as "official languages." These languages overlie one hundred five indigenous Austronesian languages, three of which are Polynesian in origin. There are strong links between local language, place, and identity, but many people are multilingual. Most children pursue elementary schooling in English or French, although few residents are fluent in either language. Most national discourse takes place in Bislama, which is becoming creolized.

Members of the John Frum cargo cult on Vanuatu
Symbolism. The politicians who forged independence emphasized shared culture ( kastom ) and shared Christianity to create a national identity and iconography. The national motto is Long God Yumi Stanap ("In (or with) God We Stand/Develop"). Leaders of the Vanua'aku Party, which governed during the nation's first eleven years, came mostly from the central and northern areas. Objects selected to represent the nation come principally from those regions, including circle pig tusks, palm leaves, and carved slit gongs. The name of the national currency, the vatu ("stone") derives from central northern languages, as does the name "Vanuatu." After independence, holidays were established to celebrate the nation and promote national identity and unity.

Vanuatu is the home to a rich Melanesian culture full of tradition, magic and ritual, where more than 100 different dialects are spoken and each tribal group has its own identity, customs and artwork.

It is a land of diversity, with French and English influence from the colonial days, and a strong Christian heritage, though some tribes still practice the ancient animistic religion.
Vanuatu is in the western South Pacific, north of New Caledonia and west of Fiji. It is an archipelago of over 80 islands, scattered over the ocean in a Y shape. There are twelve main islands, the largest being Espiritu Santo.
Formed over the last 22 million years, the islands range in topography from towering volcanic cones to raised coral islands. There are wide beaches, reefs, rainforests and deep natural harbours. Most islands are volcanic with fertile, narrow volcanic plains, but some are coral in origin. Forest and woodland still cover 75% of the land. There are frequent small earth tremors and nine active volcanoes.
The Ni Vanuatu People
While 94% of Vanuatu's population is indigenous Melanesian, it is not one culture, but many. This can be seen by the fact that over 115 different dialects are spoken within the islands. Although there are similarities in culture, each cultural grouping has its own features, traditions and artwork.
The rest of the Vanuatu population comprises: Europeans, reflecting the colonial heritage; Vietnamese from the days of indentured labourers; Chinese and other Pacific Islanders.
Vanuatu's population is very young, with over 40% of the 190,000 people younger than 15. Ni-Vanuatu have a relatively short lifespan of 61 years.
Languages
Because of Vanuatu's dual colonial heritage, both English and French are the official languages, along with Bislama , a pidgin language, based on English, that is understood by almost everyone. There are also 115 local languages.
Education
Education is expensive and often not physically accessible to childen, particularly in rural areas. Only 61% of children reach class five level at primary school and only 20% go on to high school.
Religion
Religious Beliefs. Most families have been Christian since the late nineteenth century. The largest denominations are Presbyterian, Anglican, Roman Catholic, Seventh-Day Adventist, and Church of Christ. Baha'i and Mormon missionaries have attracted local followings. Some people reject Christianity and retain traditional religious practices. Others belong to syncretic religious organizations that mix Christianity and local belief. Nearly everyone maintains firm beliefs in the power and presence of ancestral spirits.
Religious Practitioners. Christian priests, ministers, pastors, and deacons lead weekly services and conduct marriages and funerals. A number of people are recognized as clairvoyants and diviners, working sometimes within and sometimes outside the Christian churches. These people, who are often women, divine the causes of disease and other misfortunes, locate lost objects, and sometimes undertake antisorcery campaigns to uncover poesen (sorcery paraphernalia) hidden in a village. Other people specialize in rain, wind, earthquake, tidal wave, and other sorts of magical practice. Many ni-Vanuatu also suspect the existence of sorcerers.
Rituals and Holy Places. Ni-Vanuatu celebrate the Christian calendar, particularly the Christmas and New Year's season, which they call Bonane .At the year's end, urbanites return to their home islands. In villages, people form choruses and visit neighboring hamlets to perform religious and secular songs.

Ni-Vanuatu continue to celebrate traditional holidays. In many places, islanders organize first-fruit celebrations, particularly for the annual yam crop. The most spectacular celebration is the "land jump" on southern Pentecost Island. Tourists sometimes attend other traditional rites, such the dancing and feasting that accompany male initiation and grade-taking ceremonies in many of the cultures and the Toka (or Nakwiari ), a large-scale exchange of pigs and kava celebrated with two days of dancing.
Every community recognizes important places associated with ancestral and other spirits. These "taboo places" may be mountain peaks, offshore reef formations, or rocky outcroppings. People avoid these locations or treat them with respect.
Death and the Afterlife. Nearly all families turn to Christian funerary ritual to bury their dead. Ancestral ghosts continue to haunt their descendants. Many people experience their spiritual presence and receive their advice in dreams.

Marriage. The marriage rate approaches 100 percent. Traditionally, leaders of kin groups arrange the marriages of their children. Marriage is an important event in ongoing exchange relations between kin groups and neighborhoods and typically involves the exchange of goods. Some educated urban residents have adopted Western notions of romantic love and arrange their own marriages with or without family approval. Marriage rules identify certain kin groups as the source of appropriate spouses. 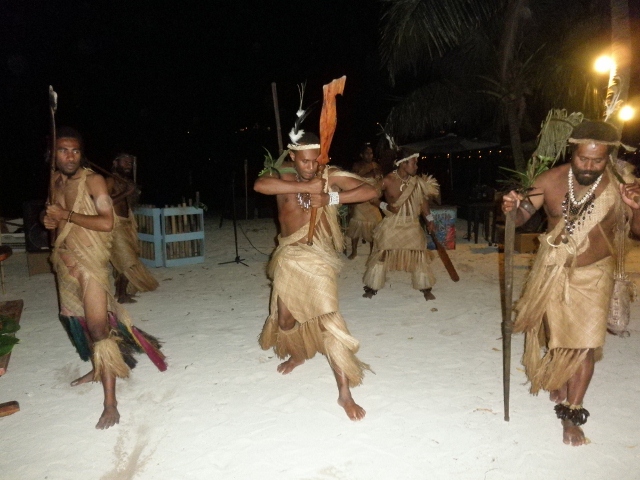 Namba dancers of Vanuatu
In the southern region, marriage is patterned as "sister exchange," in which a man who marries a woman from another family owes a woman in return. In some cases, this woman is an actual sister who marries one of her brother's new wife's brothers; in other cases, the woman is a classificatory sister or even a future daughter. In other areas, notable amounts of goods (bride wealth) change hands, including money, pigs, kava, mats, food, and cotton cloth. Traditionally, powerful leading men might marry polygynously, although after missionization, monogamy became the norm. There are three types of marriages: religious, civil, and "customary." Divorce rates are very low.
Domestic Unit. The nuclear family is the principal domestic unit, forming the basic household and being responsible for day-to-day economic production and consumption. Households, however, continue to rely on extended kin groups in significant

A mask from Vanuatu. There is a strong belief in the power of ancestral spirits.
ways. Most people's access to land and sea rights derives from membership in lineages and clans. People call on extended kin as a labor pool when they build new houses, clear garden land, and raise money and collect goods for family exchanges (marriage, child initiation, funerals). Residence typically is patrivirilocal. Women move to live with their new husbands, who themselves live with their fathers' families. Formerly, many men and initiated boys lived in separate men's houses; today families typically live together as one unit. Both spouses may be involved in managing family affairs; men, however, citing custom and Christian scripture, typically assert basic authority their families.

Big namba woman Vanuatu
Inheritance. Except in urban areas, where inheritance is modeled on European precedent, people follow local customs. Land rights pass patrilineally or matrilineally to surviving members of kin groups. In some areas, people destroy much of dead person's goods. Surviving spouses and children inherit what is left.

Melanesian Vanuatu children
Kin Groups. Families are organized into larger patrilineages or matrilineages, patricians or matriclans, and moieties. Lineages tend to be localized in one or two villages, as kin live together on or near lineage land. The membership of larger clans is dispersed across a region or island.

While homes in urban areas are made from cement, wood or tin, in villages it is still not unusual to see homes as they have been built for thousands of years from bamboo, with thatched rooves made from palm fronds. Compounds are kept very neat and tidy. 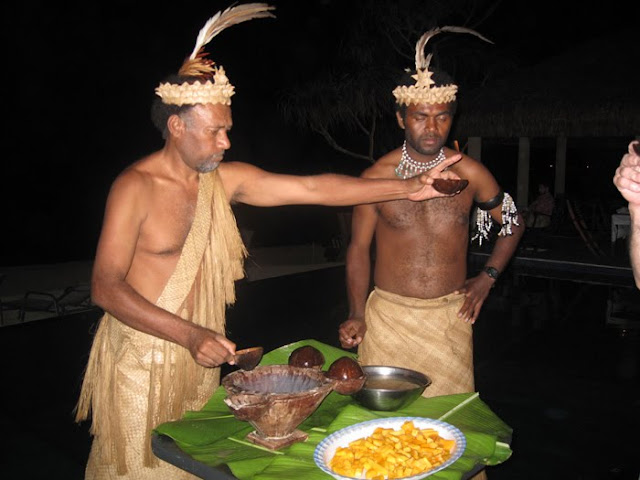 Vanuatu men serving a dish in their traditional attire

Traditional dance is one of the few remaining traditional customs of the Pacific Islanders. Melanesians, Micronesians and Polynesians all used these dance performances to pass the legends and great events from generation to generation. These dances are great visual spectacles and are performed regularly at most resorts by the local villagers. The dances are powerful and graceful at the same time and include such movements as the spear dance, the fan dance and the sitting dance.

Vanuatu kids playing in the sea